It’s time to reach back into that big box of unopened Marvel Legends and pull out another random figure. And as you can tell by the title of today’s review, my grubby paw drew back with Black Widow from the Cull Obsidian Wave. So, let’s jump right in and check out the newest version of the MCU Avenger’s femme fatale from Infinity War.

I have to be honest, I was a little disappointed by Black Widow in Infinity War. It’s not because she wasn’t in it all that much, I can forgive that when the movie is trying to juggle 30-some characters for screen time. No, the problem was that I wasn’t thrilled with her costume change and I definitely do not prefer ScarJo as a blonde, which I guess proves that I’m no gentlemen. Yeah, I get it, she’s on the run with Cap and running incognito, but I still like to see my super heroes kicking ass in their iconic costumes. Beyond that, I thought she was fine in the scenes she was in, but I’m more than ready to see her get her own movie, or more preferably a Black Widow & Hawkeye film. So long as they get her back to being a redhead again. OK, I’ve digressed enough, let’s have a look at the figure… 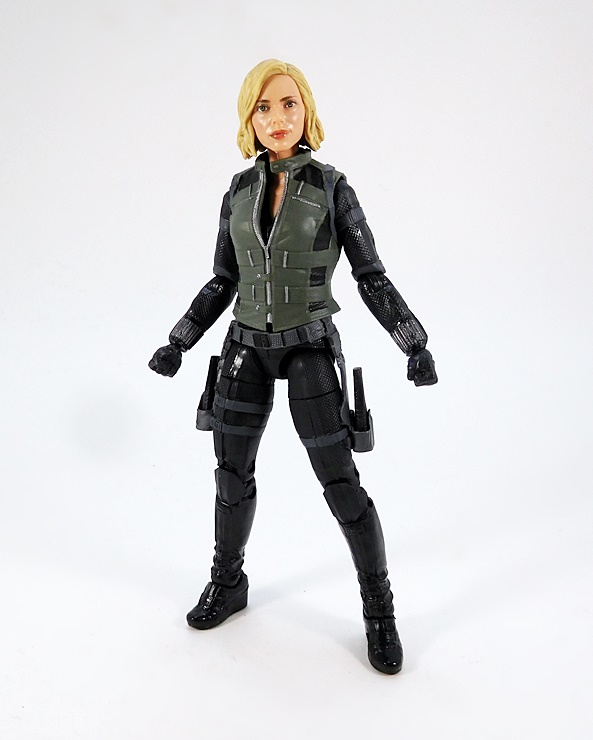 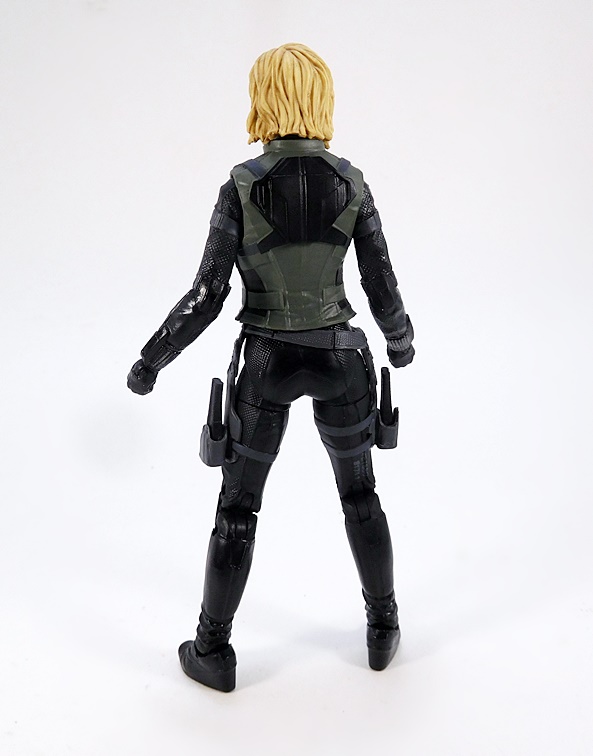 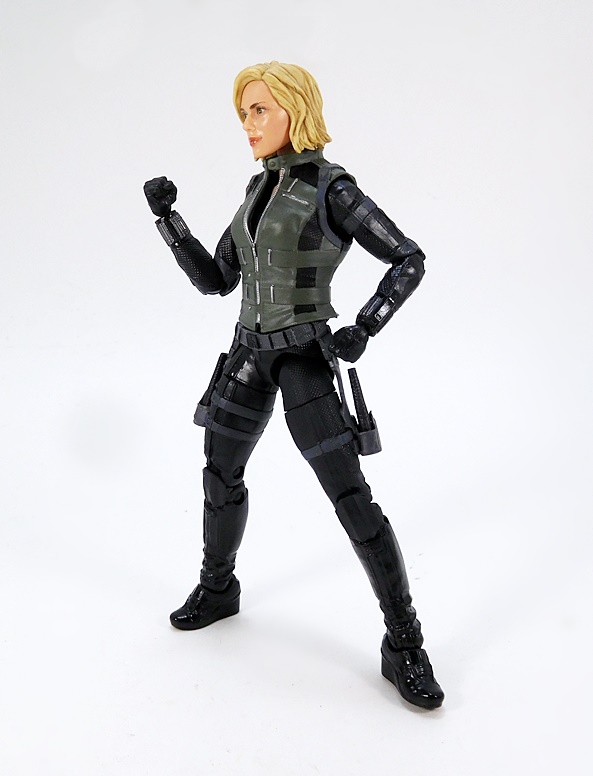 And here she is in her new duds and, hot damn, this is a great looking figure. Natasha is basically wearing a variation of her usual black body suit with the addition of a green tactical vest. The suit itself features some texturing and the various sculpted straps, holsters, and belt are painted in a dark gray. The boots stand out a bit with a glossy black finish, and her wrist bracers are a little bit under-stated compared to some of her previous costumes. The most notable thing about the new suit is the green vest and the way it’s sculpted from soft plastic and laid onto the figure. It adds a lot of nice depth to the sculpt, particularly with the zipper partly down and the way the collar flap hangs loose. The vest also features some sharp silver paint hits for the zipper and fixtures. My only complaint here is that they didn’t include a way to attach her batons to her back.

The head sculpt is a total slam dunk. It’s amazing to look back on past MCU Widows from this line and see what I thought was solid work look pretty poor compared to what we’re getting now. It’s like when I’m at the eye doctor looking through that machine and everything looks fine and then the doctor shifts the lenses and it looks just that much better. I think they really nailed her bone structure and lips beautifully. And yes, the new printing method starts to look blurry and rough when you get in close with the camera, but when viewed by the naked eye it looks sharp and clean. I still don’t prefer Widow as a blonde, but they did a nice job with the hair sculpt.

Ms Romanov’s articulation is standard fare for a Legends lady, and here’s another case where I wish they would give them the same types of points as the dudes, at least in the arms. What she’s got is rotating hinges in the shoulders, elbows, and hinged pegs in the wrists. Give me some double hinged elbows and swivels in the biceps and I would have been happier. The legs are ball jointed at the hips, have swivels at the thighs, double hinges in the knees, and the ankles are both hinged and have lateral rockers. Alas, the hinges on my figure’s ankles are frozen. I’ve tried working them a bit, but with how hard this figure was to find at a decent price, I’m not willing to force the issue. Maybe she’ll get a steam bath later. It feels like there’s still a ball joint under the chest, and the vest doesn’t inhibit it too badly. Finally, she has a hinge and ball joint in her neck.

Widow comes with two sets of hands: Fists and accessory holding hands, and that brings me to her accessories. First, she has a pair of disk shooters, which fit in her holsters. These are small, but still feature some sculpted detail. I’ve seen Infinity War twice in the theaters and probably four or five times on Blu-Ray now and I still can’t remember her using these. But hey, that’s a great excuse for me to pop it in and watch it again. 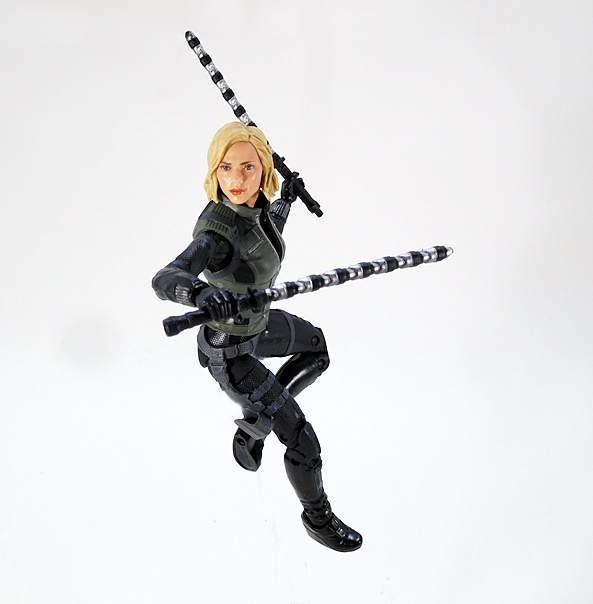 You also get her electric batons, which feature detailed sculpting in the hilts and some silver paint on the shafts. These are a little bit bendy, because they’re made of fairly soft plastic, but mine haven’t warped too badly. These are also a lot more fun than the disk shooters. 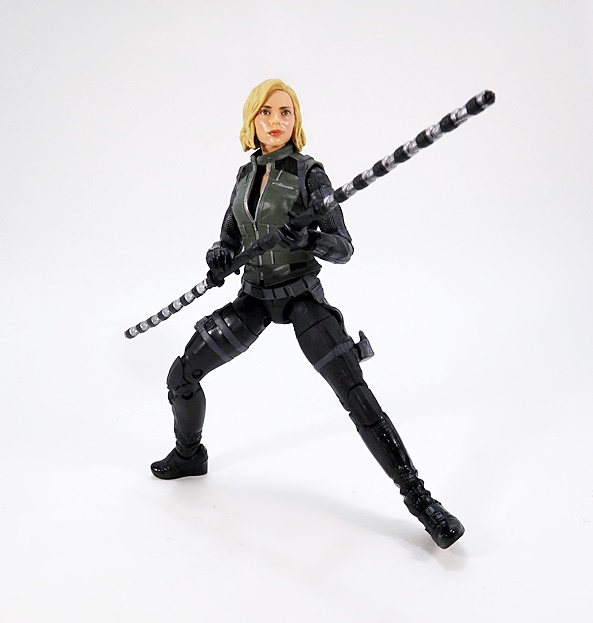 The batons can also be combined together to make one long staff, which was a pleasant surprise. 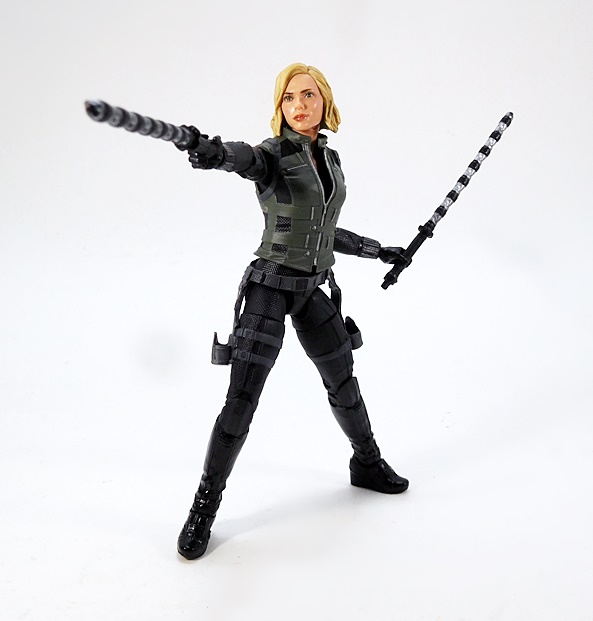 Hasbro has done an absolutely beautiful job with this latest MCU Black Widow and she’s quickly becoming one of my favorite MCU figures in recent memory. That’s saying a lot, since I wasn’t all that excited to get her in hand. Of course, getting her was no easy feat. I’ve said before that the MCU Infinity War figures have been tough for me to find at a decent price. Black Widow here is regularly selling for around $30-35 online with her BAF part, which has caused me to duck into some brick-and-mortar stores again and actually do some toy hunting. A couple of weeks ago it paid off, as I found her swinging on the pegs for $18 and I couldn’t have been happier.