Happy Friday, Toyhounds! It’s been a bitch of a week, but I’m cooling down with a couple of adult beverages, easing into the weekend, and rewarding myself for a job well done by opening up the last of the Power of the Primes Deluxe Terrorcons! If you’ve been around for my looks at Blot, Rippersnapper, and Cutthroat, then you know that I am absolutely smitten with these foul and evil little cyber-beasties. And so without further delay, let’s check out Sinnertwin! 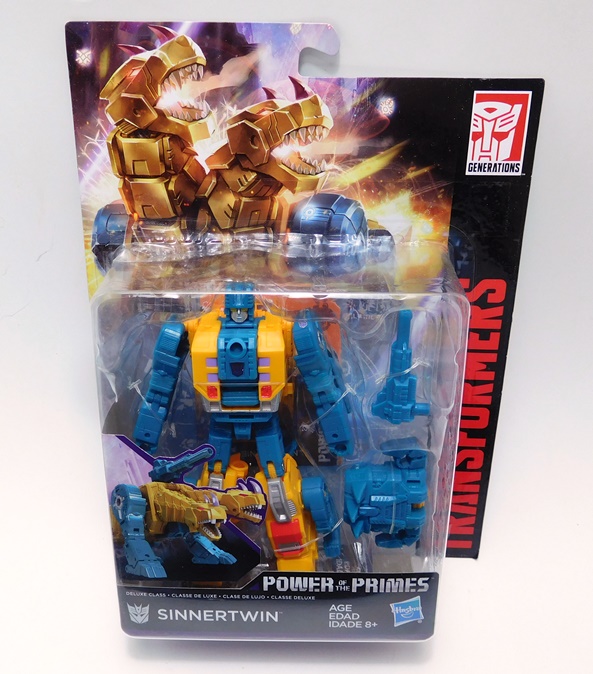 Here’s a quick look at him in his package, and once again I’ll say that I’m not a fan of this overall design, but I do love the character art on these cards. I’m anxious to see the packaging for the new line and hope we get something a little more inspired and exciting. Anywho… The Terrorcons are all packaged in their robot modes, but you get a picture of the beast mode on the bubble insert to give you a good idea of what else you’re getting. Give me a second to get him free and we’ll start with his robot mode! 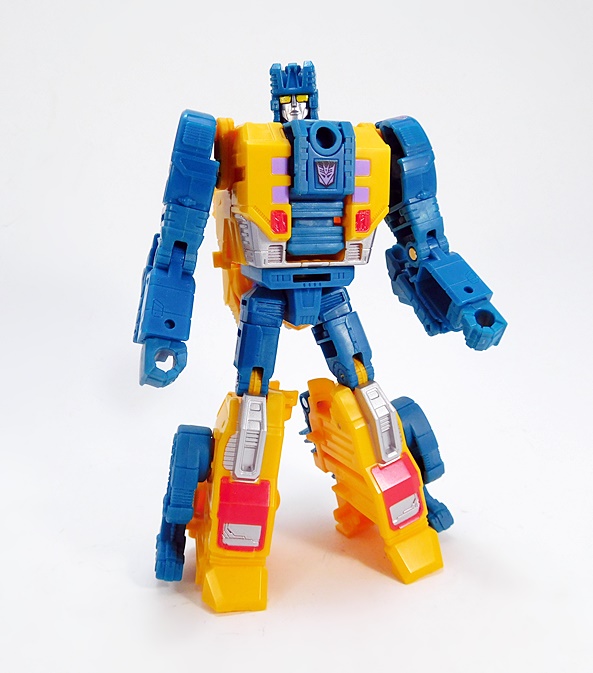 And what a nice, clean robot mode it is! Sure you get his beast legs on the side of his robot legs and his beast heads hanging down his back, but what’s here is pretty tidy and there really isn’t a lot of kibble to complain about. I like Sinnertwin’s big boxy chest, and while his arms do look a little diminutive compared to the rest of his body, I’d like to have the shoulders bulked up a bit, it’s nothing so bad that it ruins the figure for me. His combiner connector is pretty obvious and there’s a curiously large hole in his chest to accommodate the Prime Armor piece. 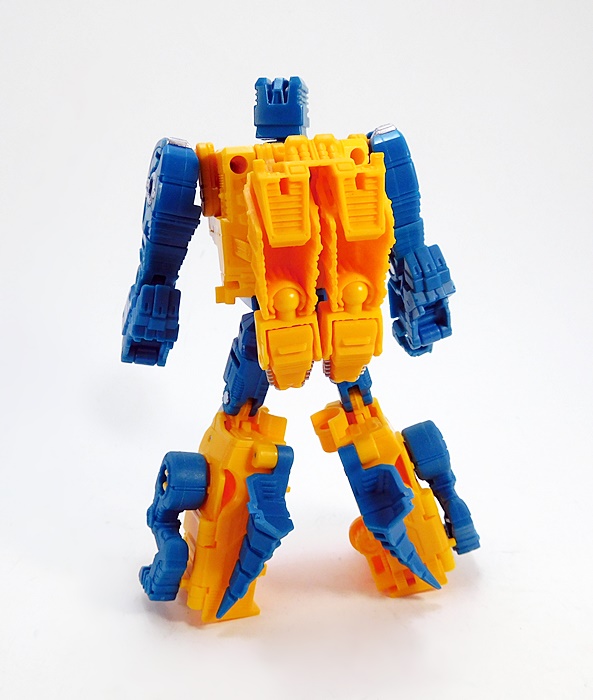 The coloring makes a strong statement with mostly yellow and blue, spruced up with some red and silver paint hits. There’s even a little purple on the panels of his chest. He’s rather bright and cheerfully colored for a Decepticon, which is probably why there’s a Decepticon insignia on both his chest and his left shoulder. The extra paint on his legs really goes a long way toward a more premium feel, and they even painted some silver in on the outsides of his upper arms and shoulders. All in all, I find his deco pretty pleasing and more than a little reminiscent of Titans Return Wolfwire. And I guess that’s not a bad thing. 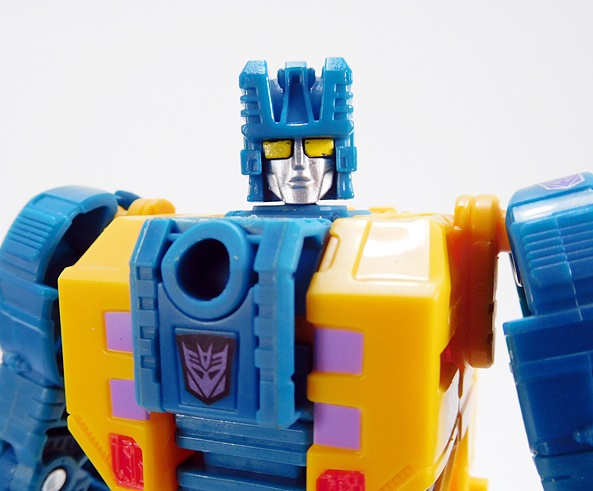 Sinnertwin features a rather robust head with a well-defined blue “helmet” and a rather stern looking face. The silver paint on the face looks great, but on close inspection the yellow paint on my figure’s eyes could have been a lot cleaner. I didn’t even really notice it until I got in close, but it’s the first time I’ve seen anything close to sloppy face paint on one of my Transformers in a long while. 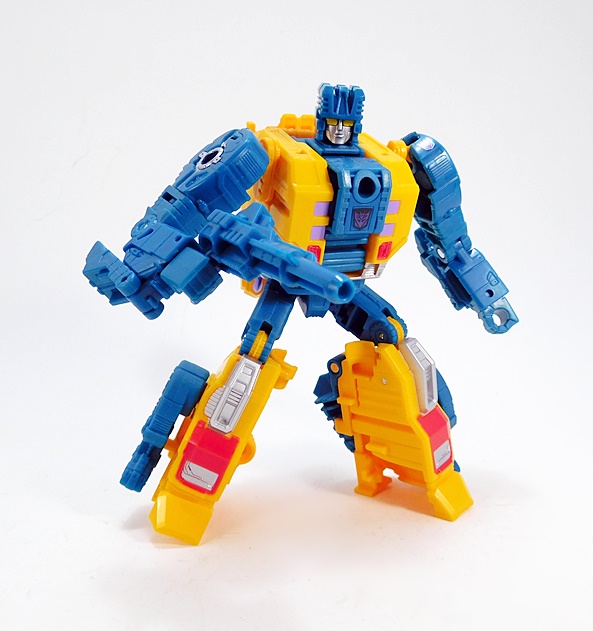 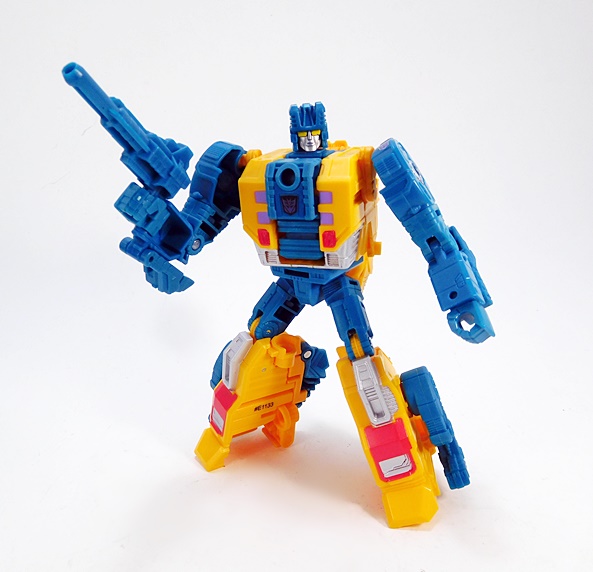 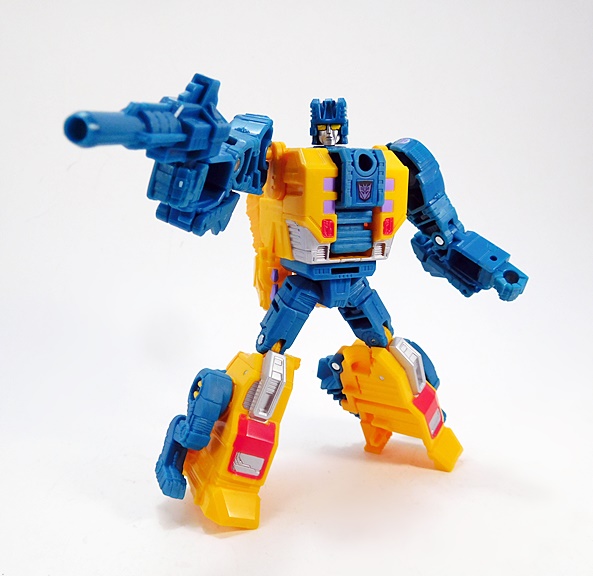 In addition to his Prime Armor piece, Sinnertwin comes with a pretty simple gun, which he can hold in either hand or can be mounted on his shoulders if you want to really mix things up. 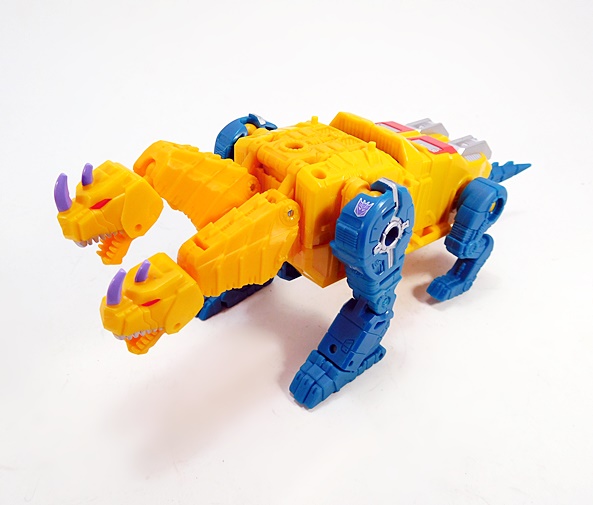 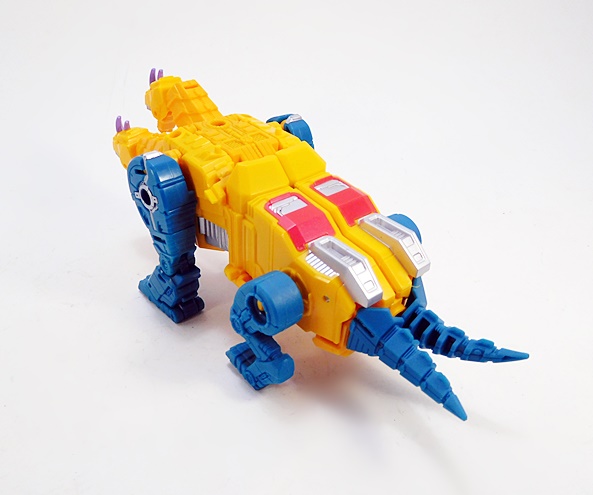 Sinnertwin’s transformation won’t win any awards for ingenuity, so feel free to just toss out the instructions. You simply tuck away the robot head, fold out the beast heads, fold the legs back into the body and deploy the beast legs. With just a few more tweaks, you’re all done. In keeping with the Terrocon pedigree, Sinner’s alt mode is a weird two-headed wingless dragon kind of thing. And here’s where this figure starts to fall a little flat for me. There’s nothing overtly wrong with his alt mode, but it doesn’t really impress or excite me either. I mean, he’s OK and all, but he’s no Twinferno. The dragon colors remain true to the robot mode and it’s nice to see that all that paint on the robot mode’s legs is still on display in this mode. I will say that I dig his adorable little split tail! 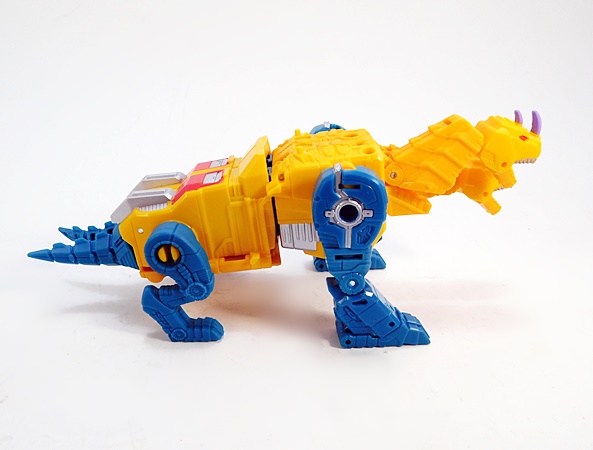 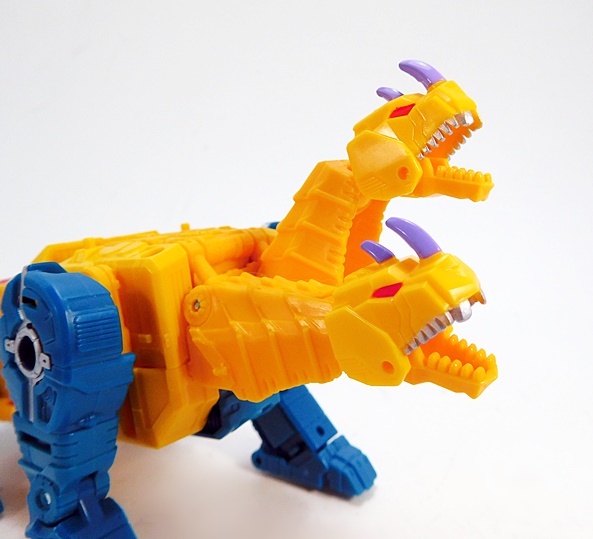 The beast heads can move independently of each other and the jaws can open and close, but I’m not a big fan of the hollow necks, especially when I position one of the heads up high and it’s really obvious. I do like that they added some silver paint to the top row of teeth. It’s a shame that paint for the bottom choppers wasn’t in the budget. At least the purple horns and red eyes are a nice touch. 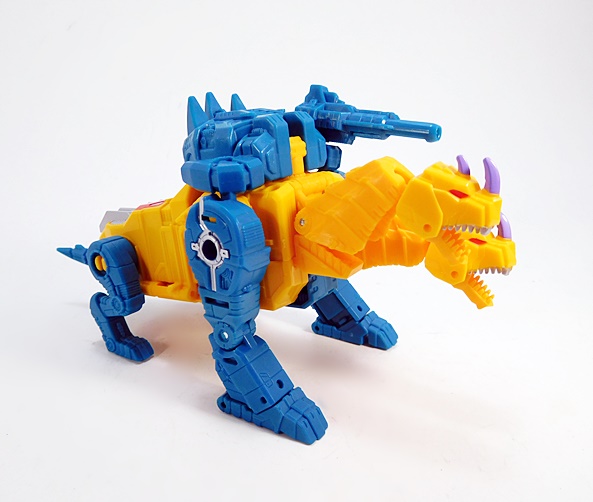 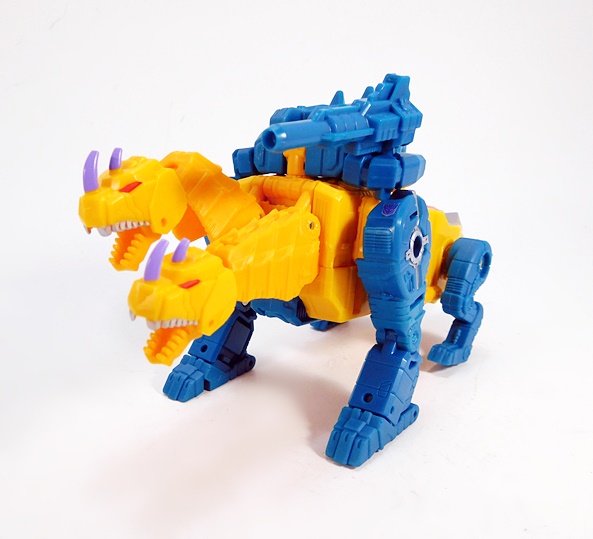 Sinnertwin also has a port on his back so you can plug in his gun, because everyone knows that two-headed dragons are even more bad ass when you strap a laser gun to their back. You can also plug it into the holes at the top of either of his front legs. And here’s a real surprise… I think the Prime Armor piece works beautifully on this guy in his beast mode. It bulks him out nicely and adds some spikes. You can also still put his cannon up there, so long as you’re happy with it over one of his shoulders. 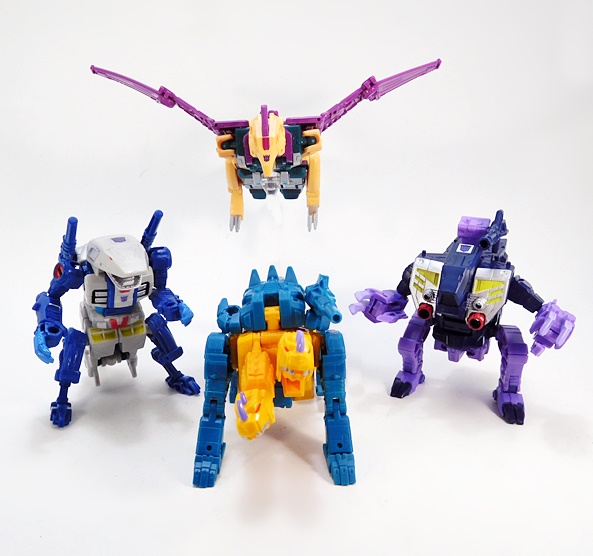 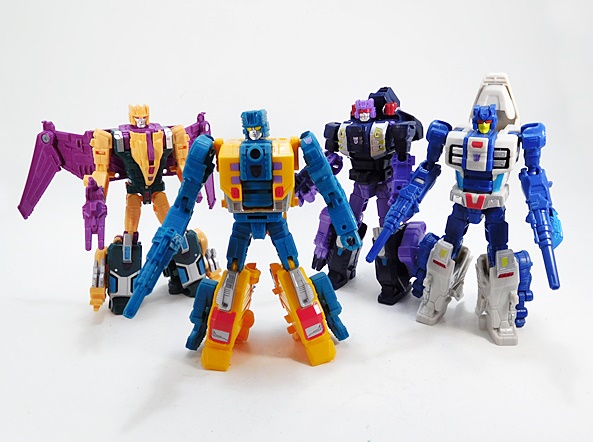 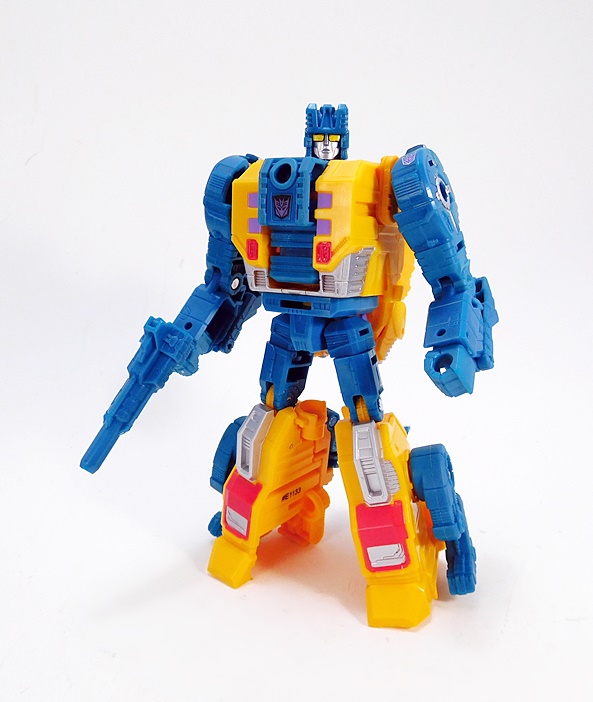 The last thing I wanted to do was end this run of Deluxes on a down note, but there you have it. Sinnertwin is a perfectly fine figure, but he lacks that certain something special that I found in each of his three Terrorcon brothers. To me he’s the French Cruller in my mix of donuts. Not bad, but still my least favorite in the batch. I guess somebody has to, and you’re it, Sinnertwin. But to be fair, this was an exceptionally great assortment of figures, so really Sinnertwin doesn’t have too much to be ashamed about. And with all four Deluxe Terrorcons open, I just have their leader Hun Gurrr left! Will it be next Friday? Maybe. It just depends if I want to bump him for some more Halloween-y content or not.