After a slight detour, I’m back to metaphorically spinning the non-existent Wheel of Legends and randomly picking another figure from my enormous backlog to open. And as you already know by the title, my grubby paw emerged from the big box of Hasbro goodness clutching onto Songbird from The Thanos Wave! 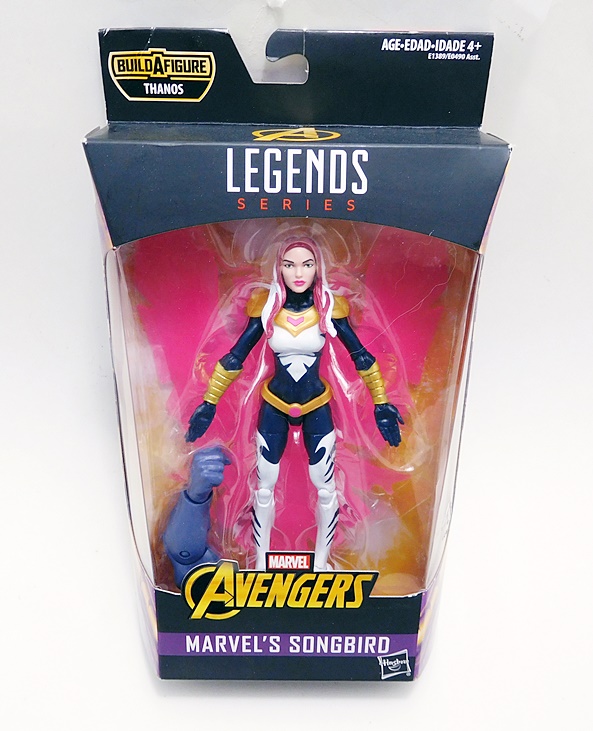 I love me some Thunderbolts and ever since Hasbro released a Legends version of that team back in 2013 at SDCC, I’m always happy to add some more members. And along comes Songbird who admittedly feels a little out of place in this wave. I’m never sure how Hasbro decides to drop certain characters into certain waves, but it’s clear that they play the themes of these waves fast and loose, and hey… if it allows them to slip in a comic character we might otherwise not get, I’m all for it. I’ve got nothing much to say about the packaging, other than she looks great framed on the tray with her giant effect part behind her. 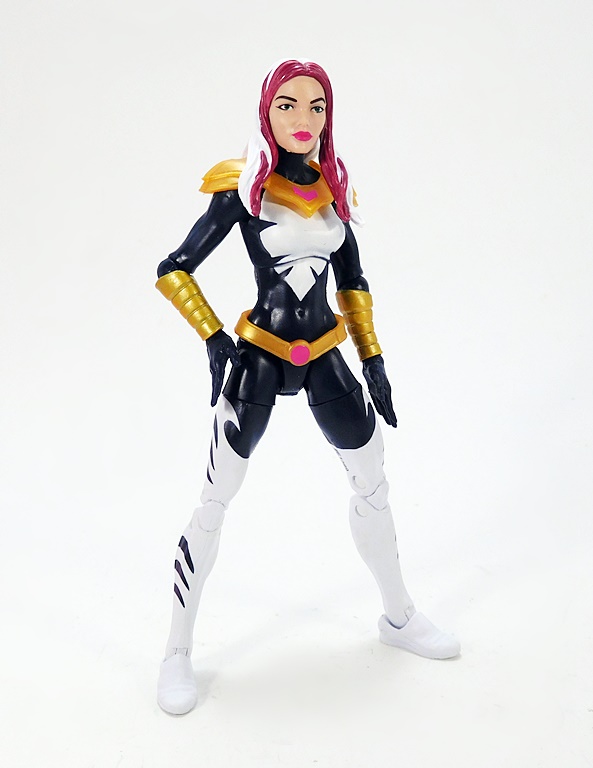 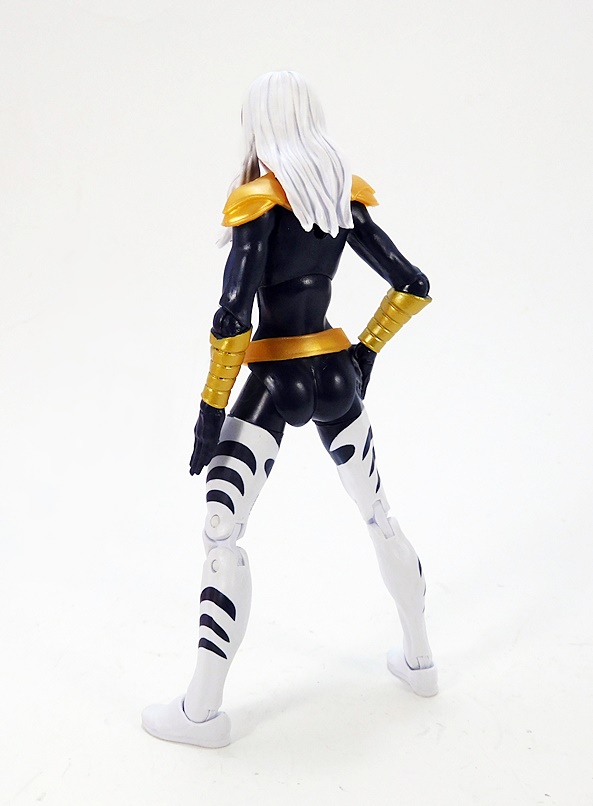 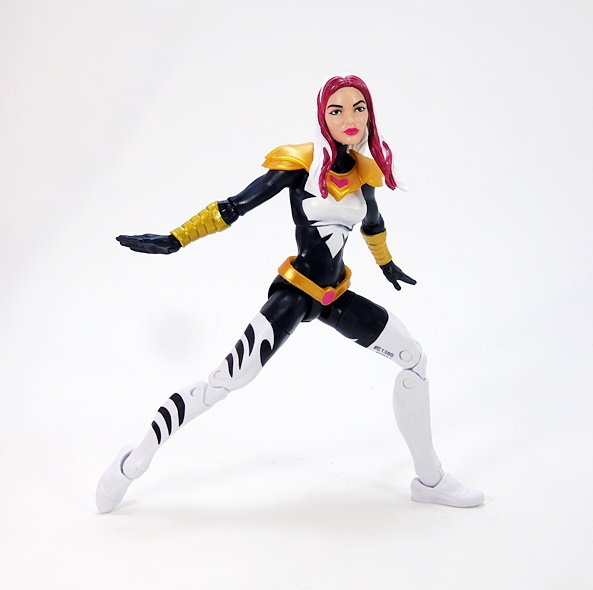 I feel like Melissa’s been wearing this costume (or a close variation of it) since forever. Or at least since she cast off her goofy greens from her Screaming Mimi days and began dolling out Justice like Lightning!™ And why not? This black and white bodysuit is a clean, sexy, and modern look that stands the test of time. Hasbro did a nice job recreating it mostly in paint, with bright and vibrant whites and sharp lines around the black bits. Even the lines around those black crescents on the outside of her legs are razor sharp. I’m also happy to report there’s no bleed-through in the white, which is pretty common with white paint on darker bucks. Extra sculpting comes in the form of her gold accessories. These include her segmented arm bracers, her belt, and her shoulders, of which the later two are separate pieces. The deco is rounded out with a little pink paint on her neck piece and belt. 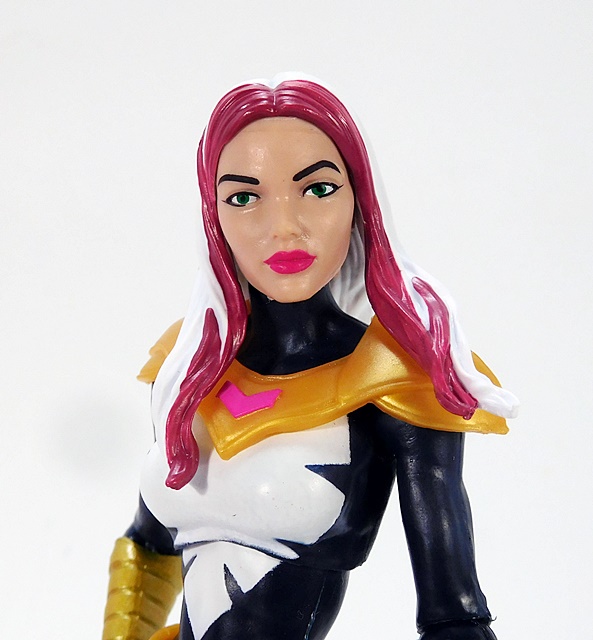 The head sculpt is quite good too! Ms. Gold is sporting some full lips and green eyes. Like her suit, the paint here is pretty sharp and clean. They also did a nice job painting the highlights in her hair, which is sculpted to fall about her shoulders and down her back fairly naturally. It does, unfortunately inhibit some of the neck articulation, so it’s not too easy to get her looking up when in a flight pose. 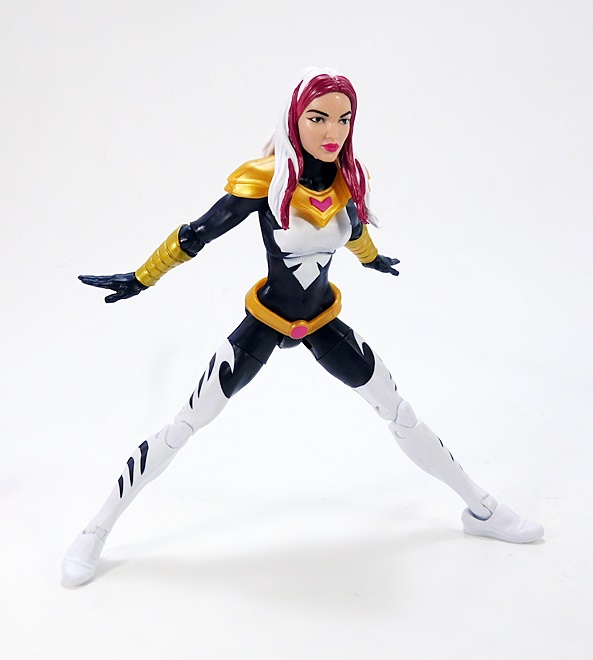 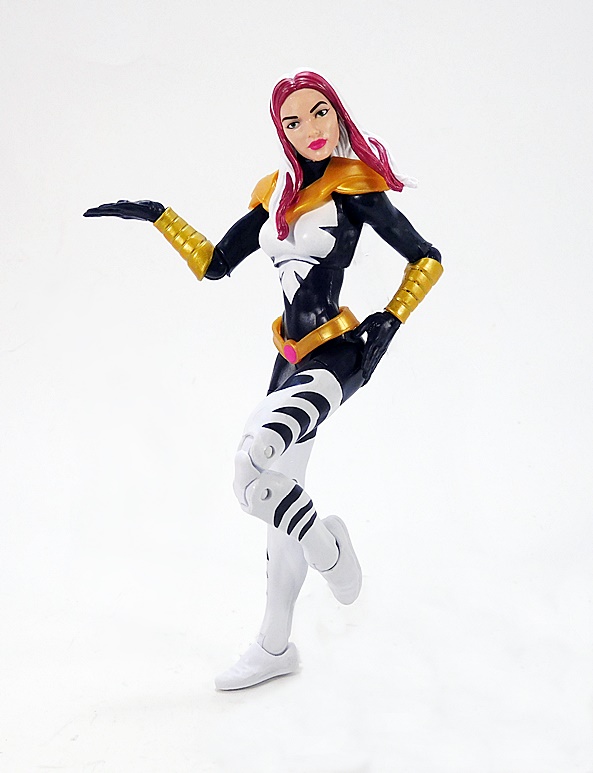 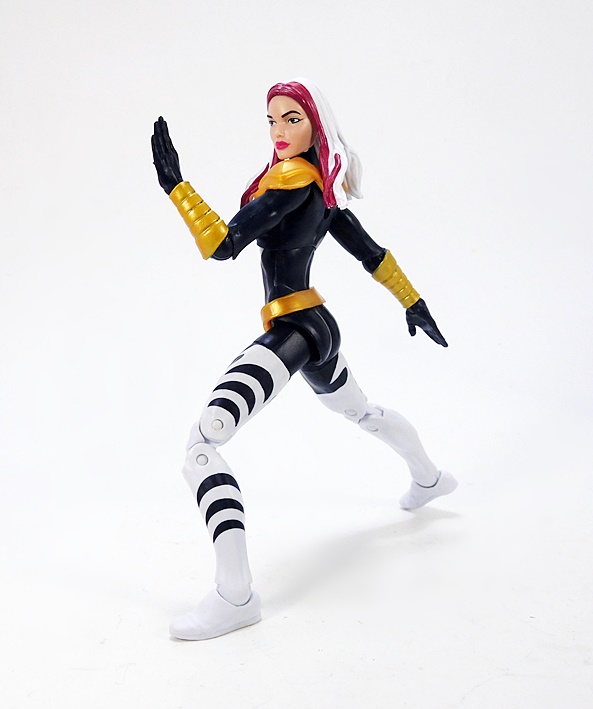 And speaking of articulation, Songbird holds no surprises in that department. You get rotating hinges in the shoulders, elbows, and wrists. The legs are ball jointed at the hips, have double hinges in the knees, swivels in the thighs, and both hinges and lateral rockers in the ankles. There is no waist swivel, but there is a ball joint under the chest, and the neck is both hinged and ball jointed. She’s lots of fun to pose, but I do wish she came with a second pair of hands. The ones she has work well for flight, but optional fists would have been welcome additions. 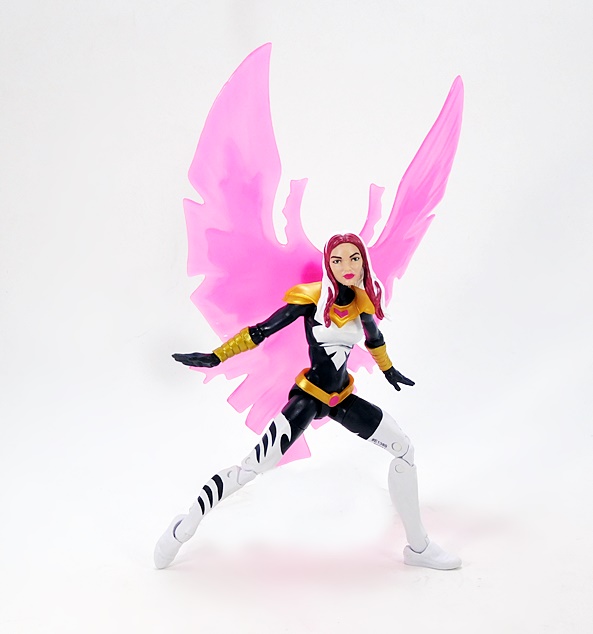 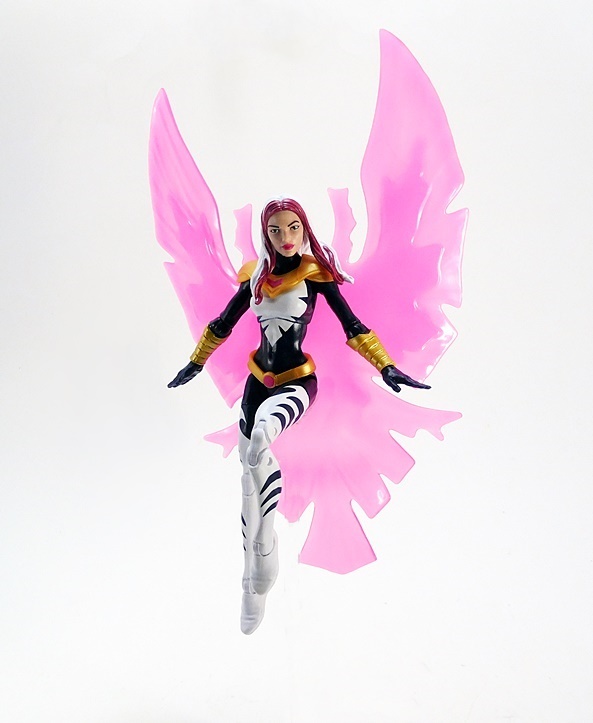 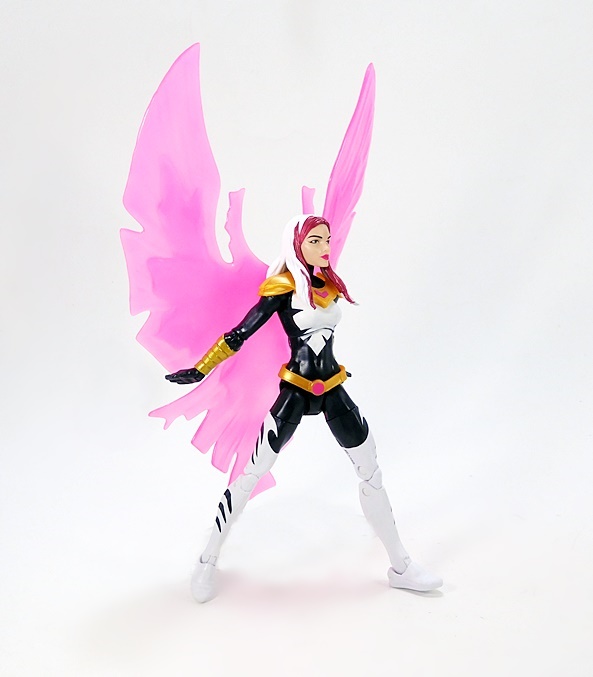 As we already saw in the packaged shot, Songbird comes with one big accessory and that’s her energy wings. This effect part is just one big piece of translucent pink plastic, which pegs into the hole in her back and looks pretty damn nice. It does maker her a tad back-heavy, but I was able to get her standing with it without too much trouble. 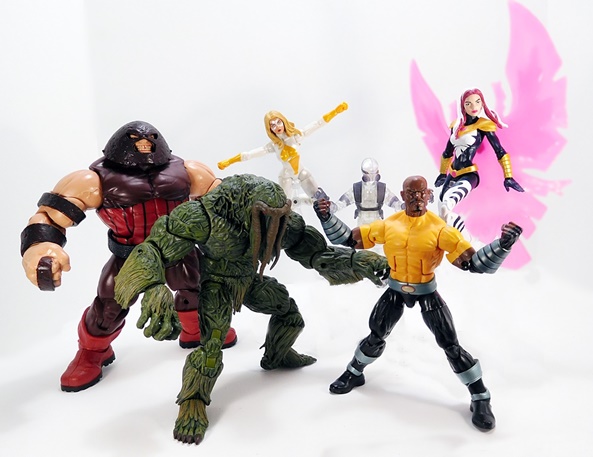 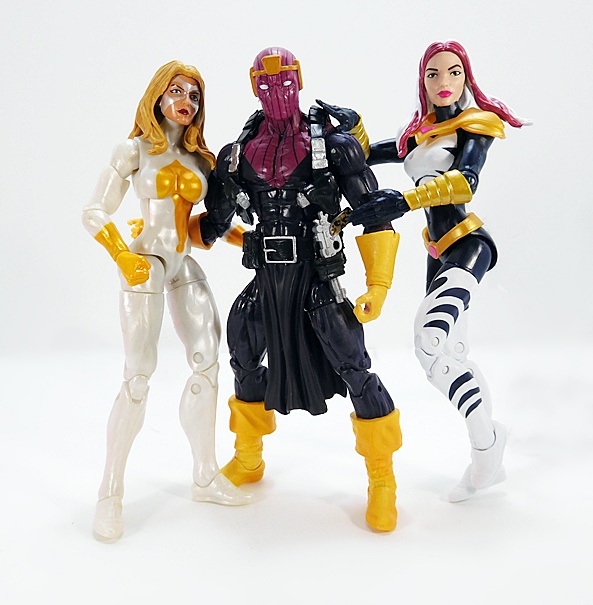 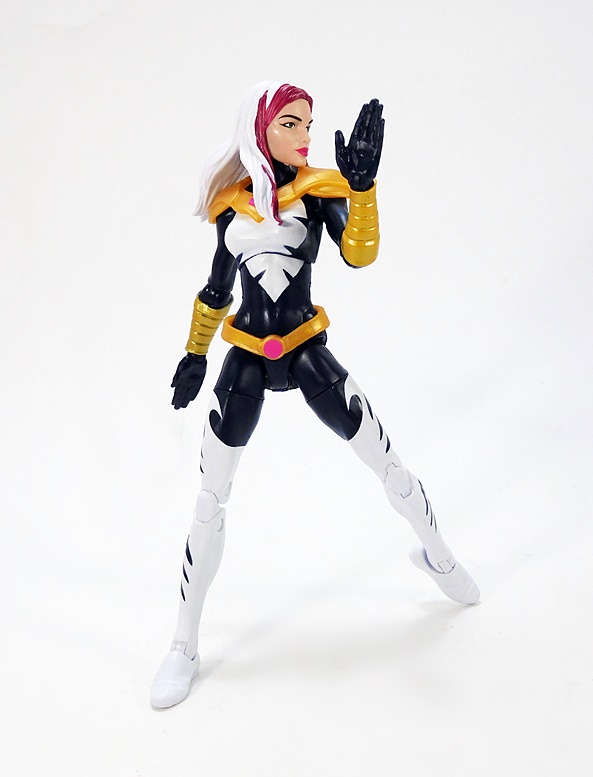 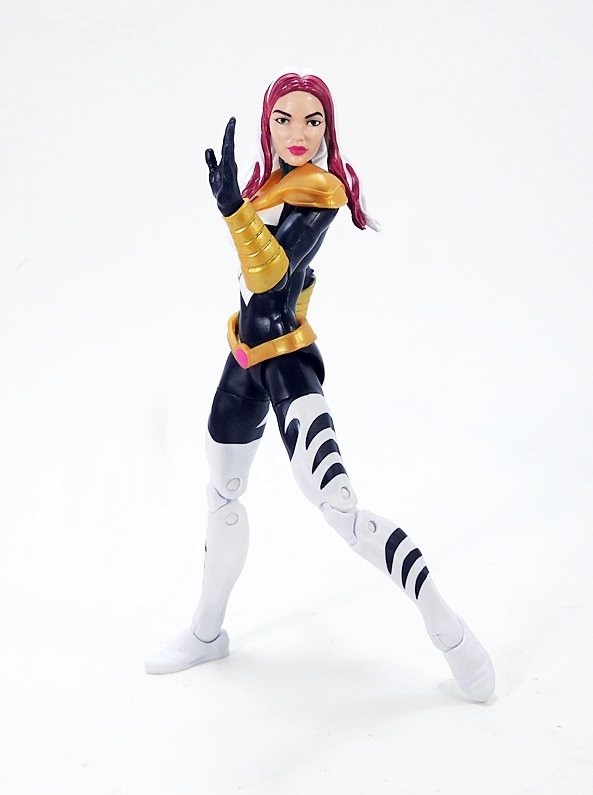 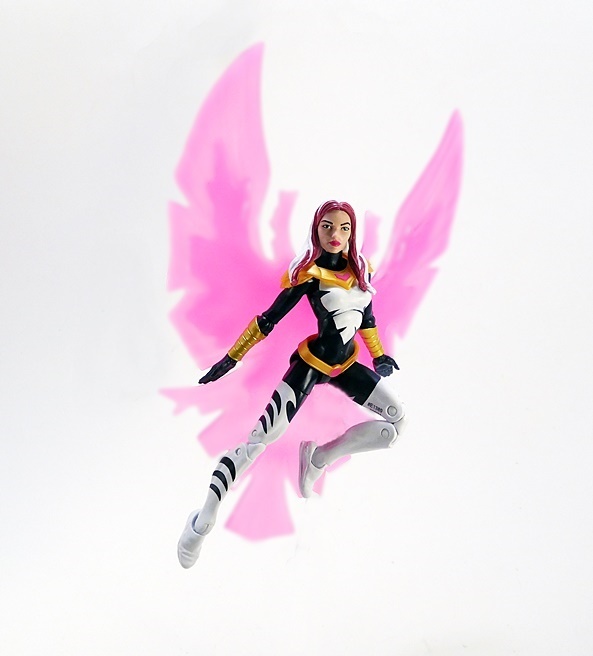 Getting a comic-inspired Songbird in what is more or less an MCU Infinity War themed wave was a really nice surprise. I mean, can you even imagine what the meeting with the retailers must look like? Hasbro: “Infinity War is going to be the biggest movie event of the year. The kids are going to want to relive it with the action figures!” Walmart Rep: “I like it! What’ve you got?” Hasbro: “Spider-Man! Thor! Iron Man!” Rep: “Brilliant!” Hasbro: “And Songbird!” Rep: “Who the hell is that? Is she in the picture?” Hasbro: “Well…” It’s yet another example of how Hasbro is treating this line as a labor of love and willing to take risks to get as many characters out to the fans as possible.