The day is finally here, my week long Twitter #HalloweenCountdown has reached Halloween, and I haven’t managed to get through nearly as much new stuff as I wanted. How the hell did I used to find the time to do five reviews a week? Nonetheless, I’m not going down without a fight and I’m back this afternoon to check out another one of Funko’s Savage World Slashers. Who will survive? And what will be left of them? Let’s find out…

Yes, Funko decided that they weren’t filling up those landfills in New Jersey fast enough with all the Pop!s and WobblerZ and Dorbs and whatever the hell they make, so now they’re shipping horror movie slashers with He-Man figures. What idiot buys this stuff? ME!!! And here is the obligatory packaged shot. You get a good look at the figure if you want to hang him on the wall carded. Otherwise, it’s time to do some slashing of your own to get him out because this card-and-bubble is decidedly un-collector-friendly. 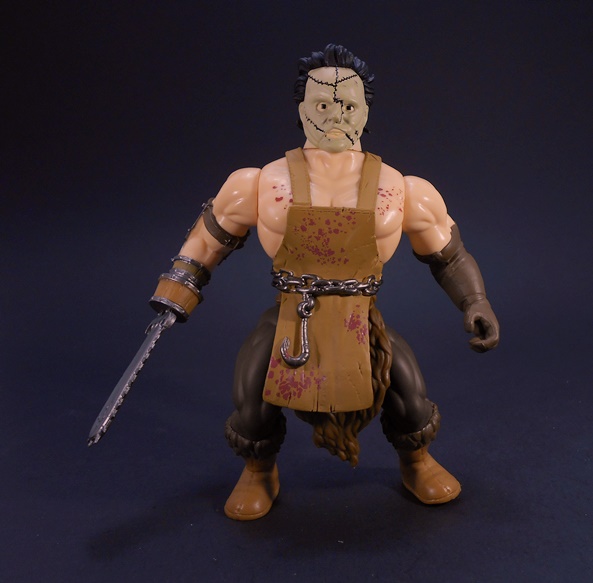 And despite the Masters of the Universe makeover, there’s no doubt who this is supposed to be! Funko took all the key points of old Leatherface and did some tweaking, but the results are pretty damn cool. His shirtless upper body advertises his impressive new physique that makes me wonder just what them boys are putting in all that chili he eats. He’s got a sculpted apron with some wear and tear, as well as stitching, and it’s accessorized with a hook on a chain that girds it around his pinched waist. Toss in some splattered blood and the result is c’est magnifique.

I’ve pointed out my appreciation for the little details on the other two Savage World figures I reviewed and the same holds true here. Leatherface actually has a sculpted furry loincloth layered under his apron, which is pretty cool. He also has the furry barbarian boots with the stitching up the backs, and his right left arm features a long leather glove. 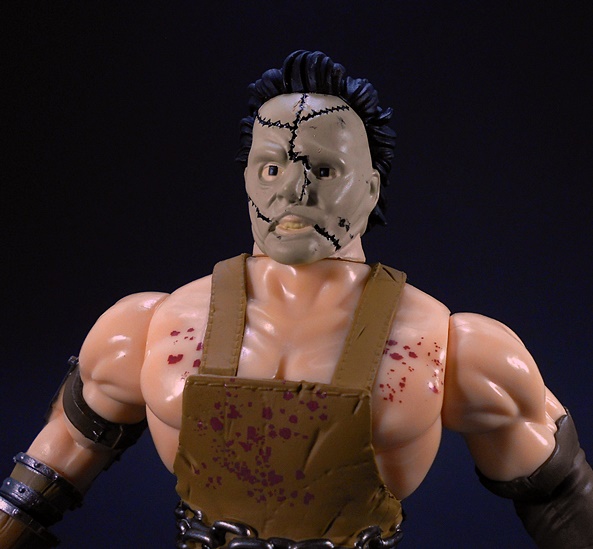 While Freddy’s portrait was a bit of a reach, Leatherface falls more in the Michael Meyers camp in having a pitch-perfect head sculpt. The DIY human-hide mask is haphazardly stitched and his real skin is peeking out around the mouth and eye holes. I also dig his crazy black hair. 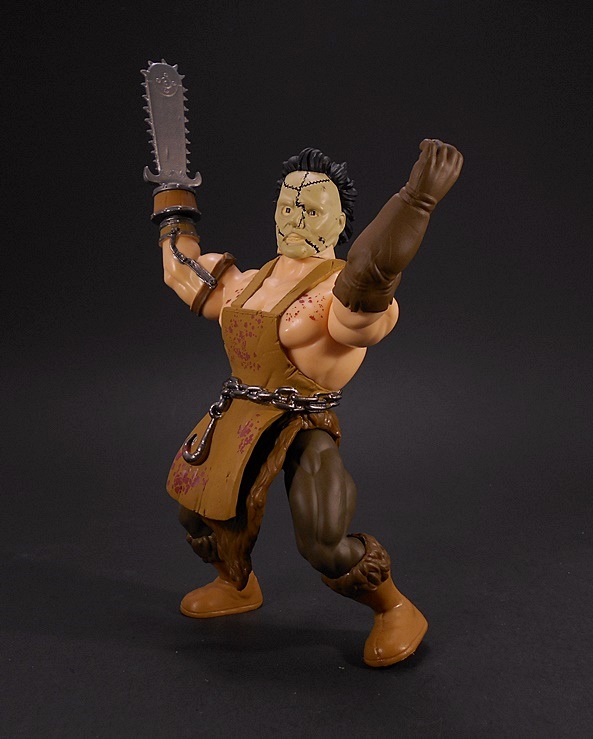 Leatherface’s right arm is fitted with a contraption that would make Ash Williams proud, and that’s a medieval-looking chainsaw grafted onto the end of his forearm. This is where most of the liberties are taken with this design, but it looks great and I really dig it. 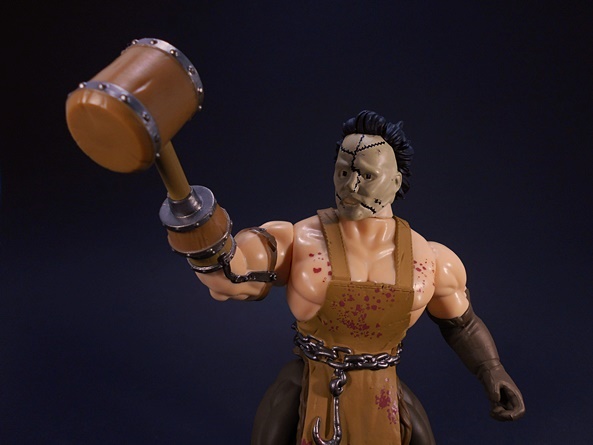 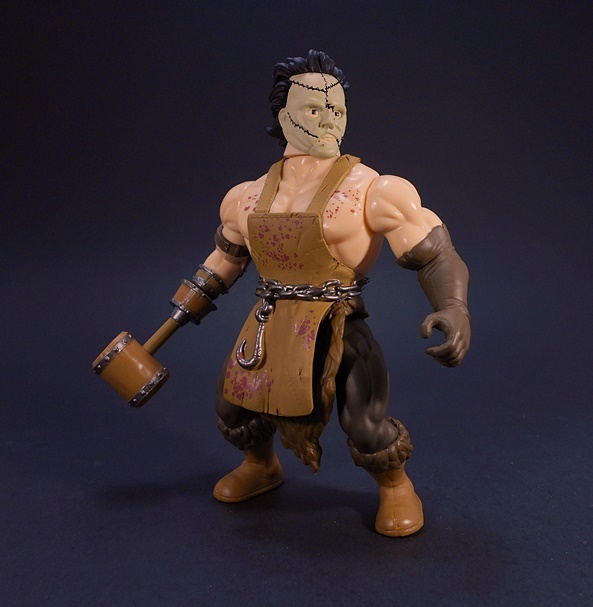 There’s even an extra attachment in the form of this goofy wooden mallet. Hey, that people meat don’t tenderize itself, amiright? 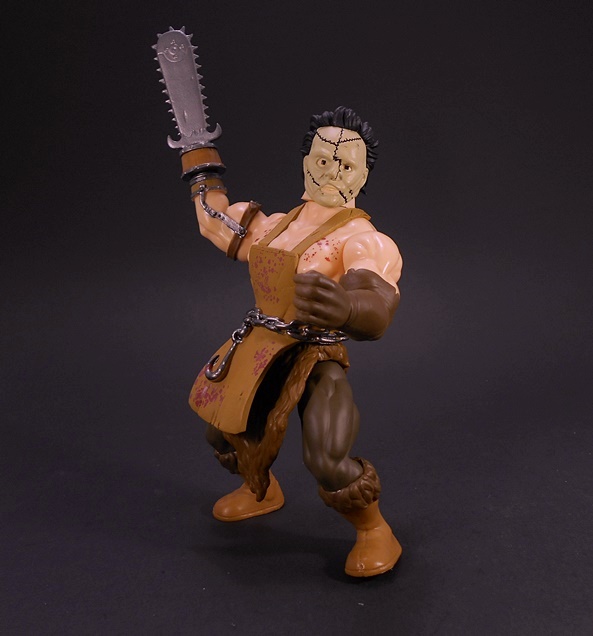 While I’ve been enjoying all of the figures in this line quite a bit, I’m going to have to rank Leatherface here as my favorite so far. They really did a nice job adapting the character to this ridiculous format. Sure, he’s clearly Leatherface, but he also looks like some crazy medieval butcher out of one of those B-movie Sword-and-Sandals flicks. So, maybe this is just a nonsensical license-mashing cash-grab on Funko’s part, but it’s hard to deny that they’re putting some real love into it. 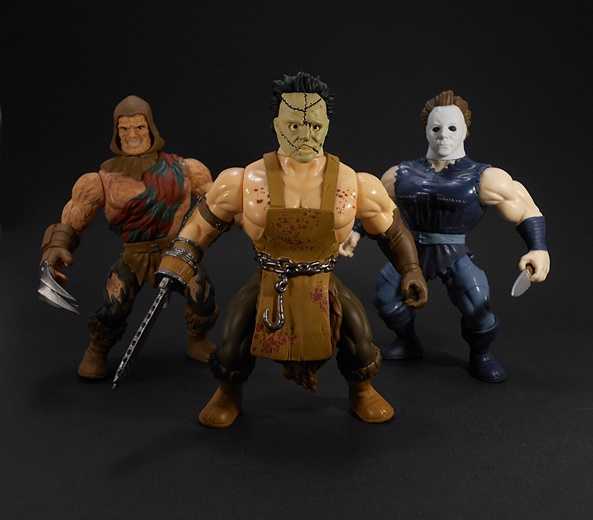 And that wraps it up for my #HalloweenCountdown, but I’m not quite done with the spooky stuff for the week, because tomorrow starts my #HalloweenAfterParty where I’ll try to squeeze in a few more horror-themed reviews before the end of the week!