Happy Halloween, folks! You’ll note that I’m sticking with Mythic Legions for my Wednesday content, but I still tried to go for that Halloween connection by checking out a vampire! Carpathias was actually the first vampire to hit Legions as part of the original assortment, but he didn’t make my budget crunch for the first Kickstarter and I’ve been regretting it ever since. Fortunately, he was part of the later All-Stars Sale and I was able to pre-order him, but who knows when those are going to be shipping. 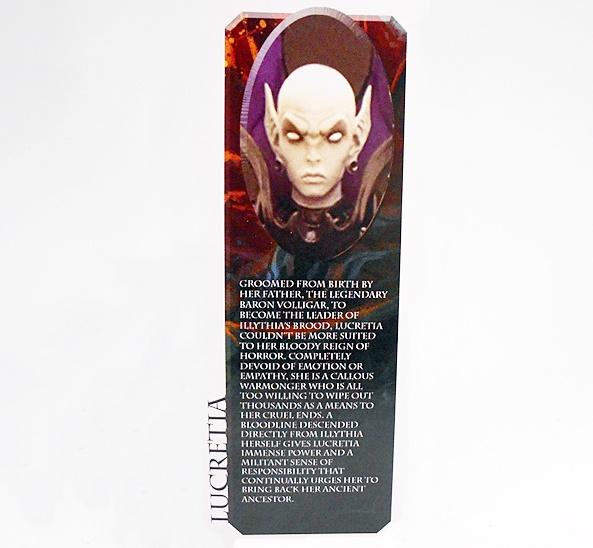 So while not the first Vampire, Lucretia is actually the first female vampire. She also happens to be the daughter of Baron Volligar, who was released as part of the Covenant of Shadows assortment. Her bio makes her sound like a nasty piece of work. 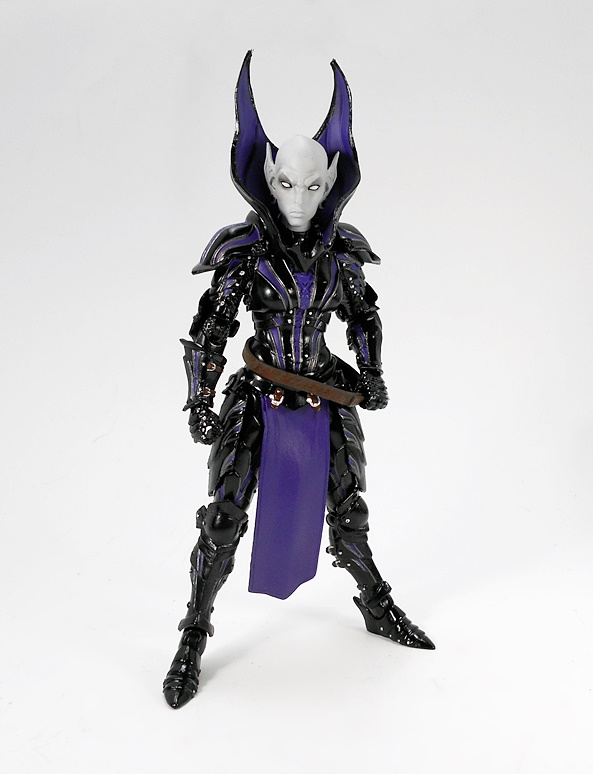 And she looks like one too! Lucretia’s body reuses something like 95% of Gwendolyn Heavenbrand’s armored body, with only two key differences. The first is the sculpted purple sash that hangs down from the front of her waist. The second is the tall and sinister, gravity-defying collar that frames her creepy head. Even the shoulder armor is the same sculpt as Ms. Heavensbrand’s. I won’t rehash all the gushing I did over this sculpt last week, but suffice it to say I love all the little details like the tiny straps “holding” the overlapping plates together, the individual rivets, and the exposed chainmail in the joints. 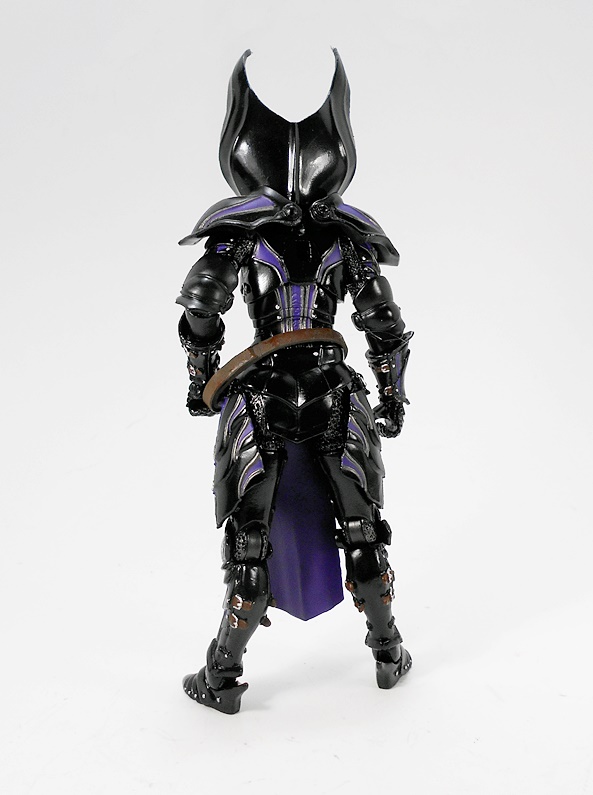 Of course the new deco helps a lot to set this figure apart and it is indeed a beautiful coat of paint. The primary color for the armor is a glossy black with matte purple running through some of the decorative panels. We’ve seen a similar deco on her dear old dad’s armor and it looks as great as ever. You also get a flat gray outlining those panels. Other little touches include metallic silver for the tiny rivets, as well as for the buckles of the brown-painted straps. As with Gwendolyn’s armor, this is an absolutely sumptuous paint job, making the already impressive sculpt sing, even if that song is a fear-inducing dirge of death. 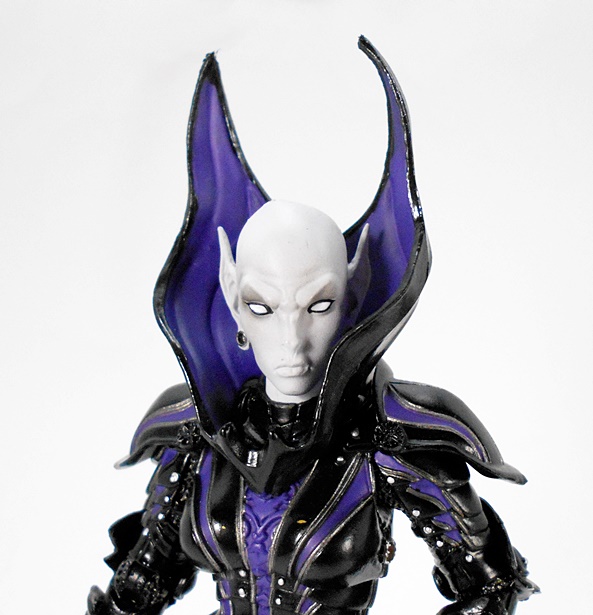 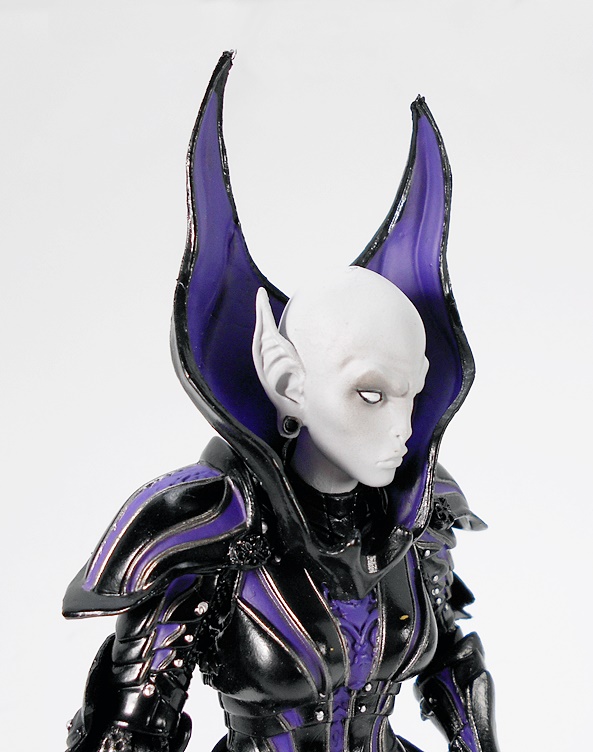 I’ve been in love with the vampire head design since first seeing Carpathias, and that certainly carries over to this new female head. The pale bald head features a rather distinctive nose and brow, which is very familiar. And when coupled with the sharply pointed ears and severe look, I’d say this one is an effective cross between the bloodsuckers of Salem’s Lot and Buffy the Vampire Slayer. The earrings are a nice touch and there’s some subtle shading applied to her skin. 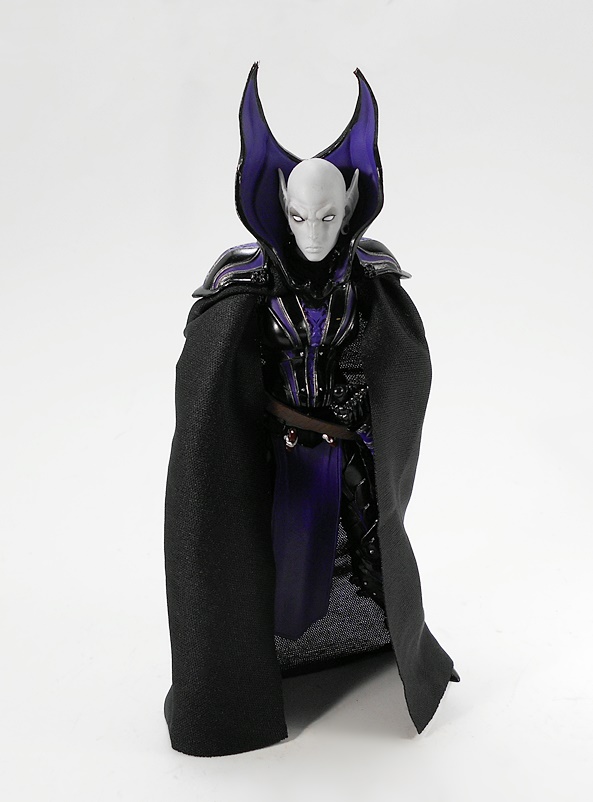 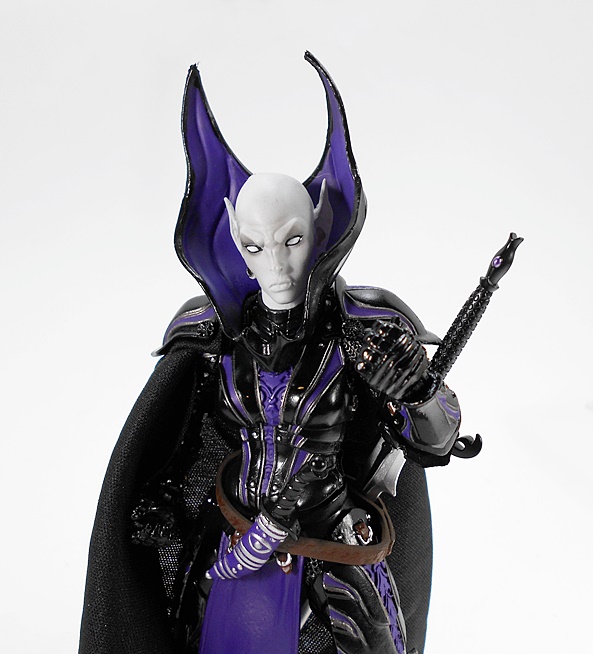 Lucretia comes with a flowing black cape, which as always requires the use of the shoulder armor to equip it on her, as the pegs pass through holes on the cape to secure it. That’s no problem for me, as I almost always display these figures with their shoulder armor. But since they are optional, and the figure displays quite well without them, it’s still worth noting that the cape does only work with the shoulders. I love the way it looks on the figure, but it can get in the way of her wearing her sword. And speaking of which, let’s check out her weapons. 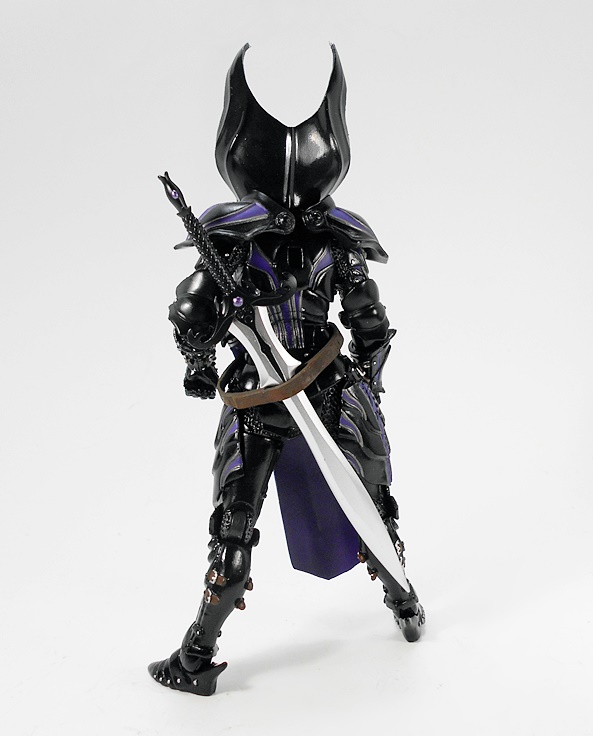 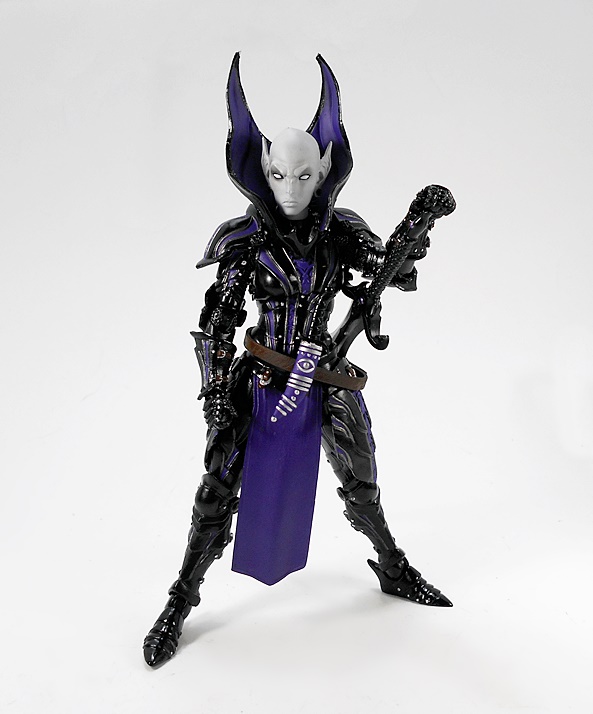 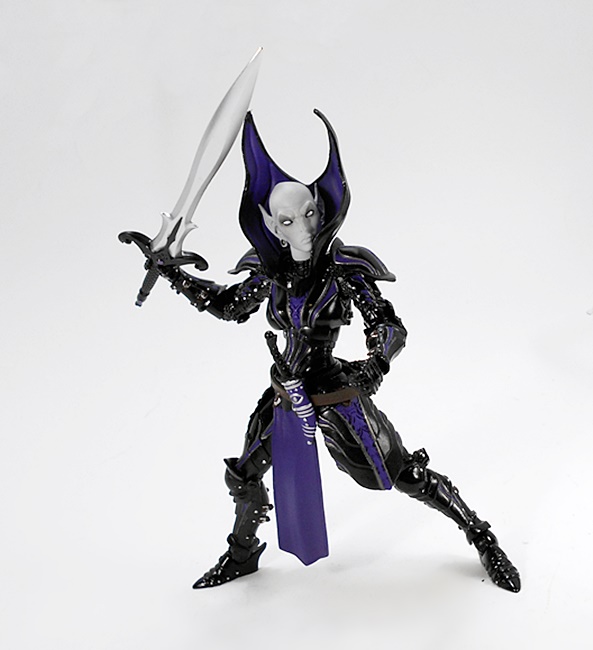 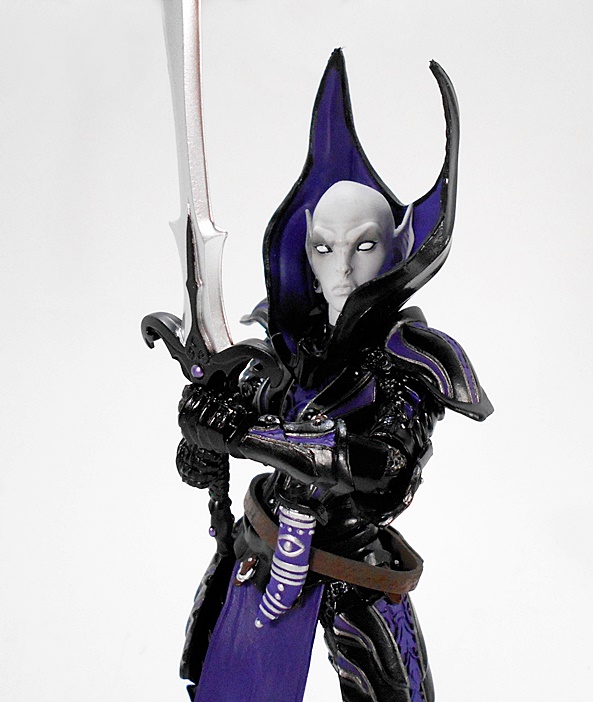 Her primary weapon is a two-handed sword, which is new to me. It’s a decidedly vampyric-looking weapon with an elegant hilt featuring an extended, textured grip and a curved crossguard with ends that terminate in a flourish. The black hilt also features a purple stone embedded in the center of the guard. The silver blade is roughly leaf-shaped with a swell about three-quarters of the way down to the point. The configuration of the blade means it won’t pass all the way through the loop in her belt, but the fact that it rides high makes it look like it’s slung across her back and I kind of dig that. I do wish T4H would have started producing some of these belts in black by now, because I think it would have looked better on this figure. Or perhaps even in red, like they did with the Black Knight Legion Builder. 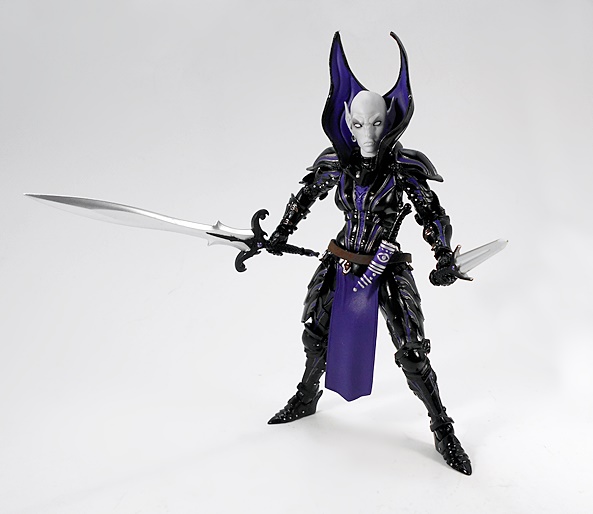 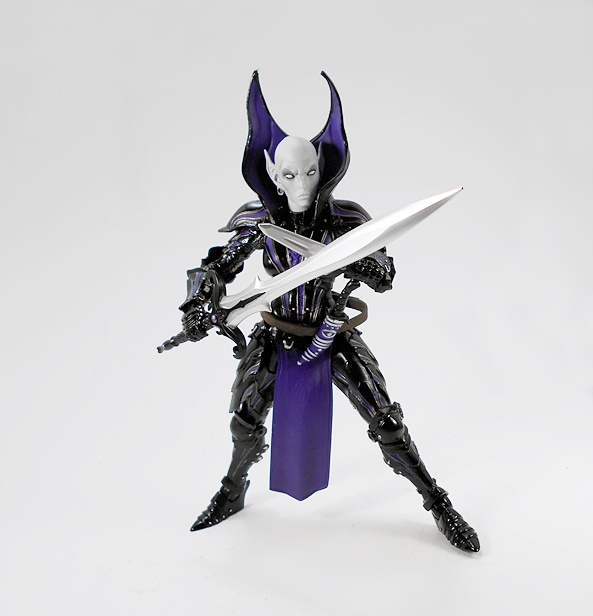 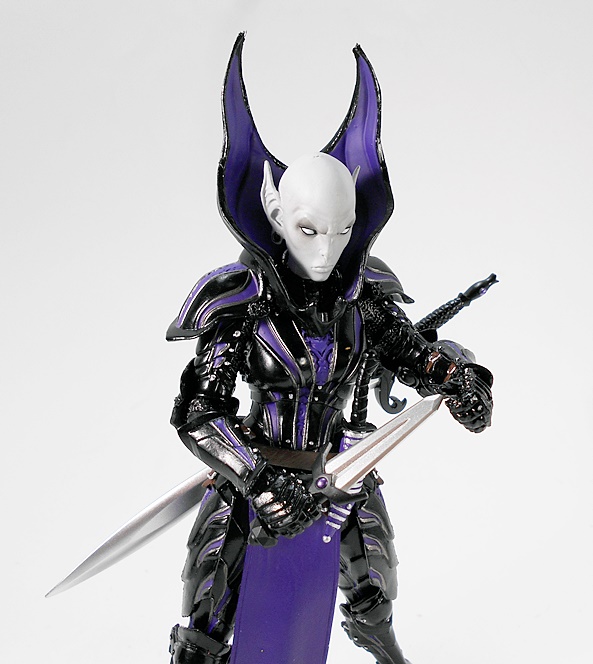 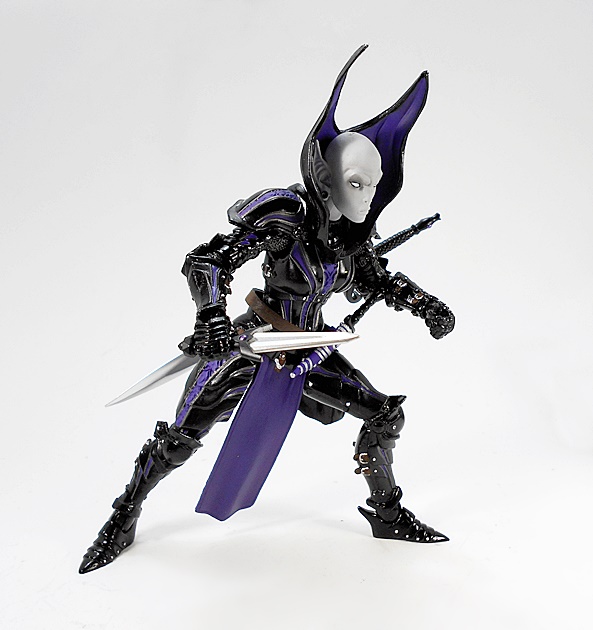 Next up, she has this stout-bladed dagger with a black hilt and purple stone in the center of the guard. It’s not a perfect match for the sword’s handle, but close enough to look good if she’s wielding them en suite. It would have been an especially nice parrying dagger, had they given her a single-handed sword. 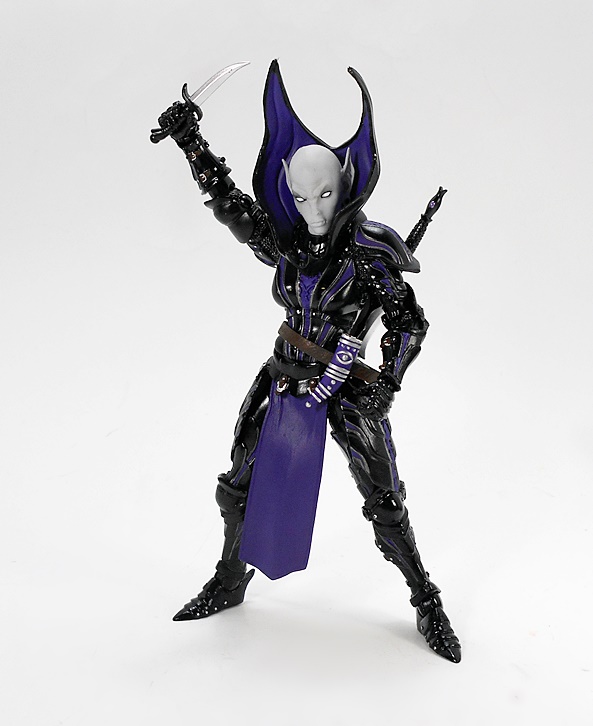 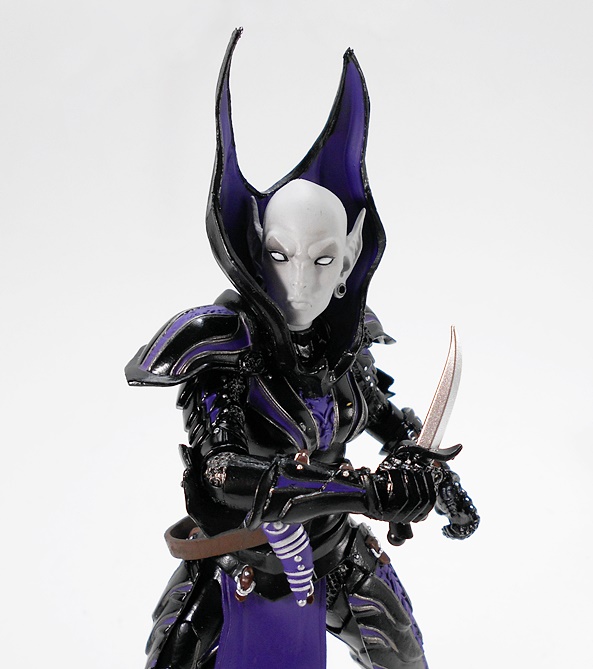 Finally, Lucretia comes with a hooked dagger and sheath, and the sheath is something introduced in this Advent of Decay series. It’s plastic with a purple and silver deco and a clip on the back that hooks to the belt. The dagger fits in it quite well and is easy to draw out. It’s a great addition to the Mythic Legions armaments and it makes me wish even more that they will one day tackle scabbards for the swords. Hey, they could easily release a scabbard pack with different decos for the existing swords. I’d buy it! 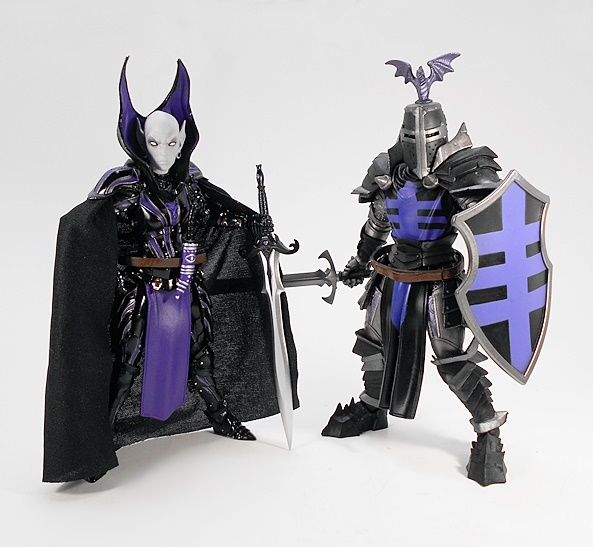 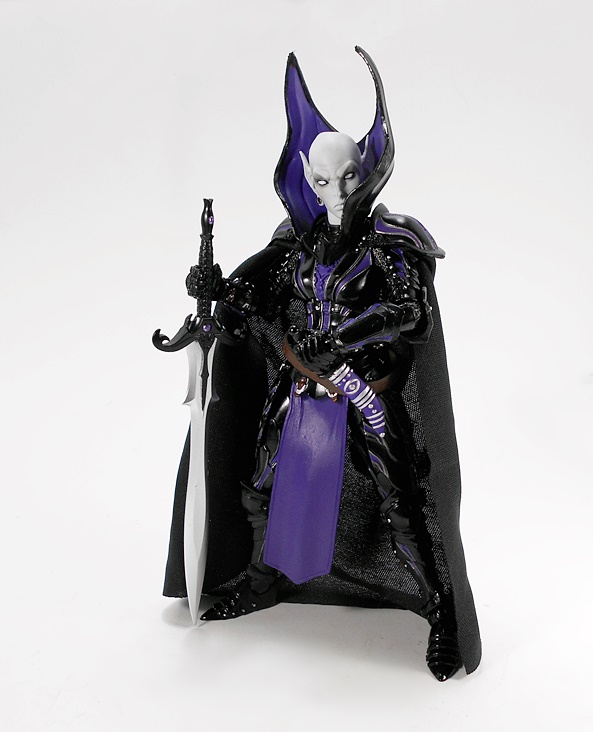 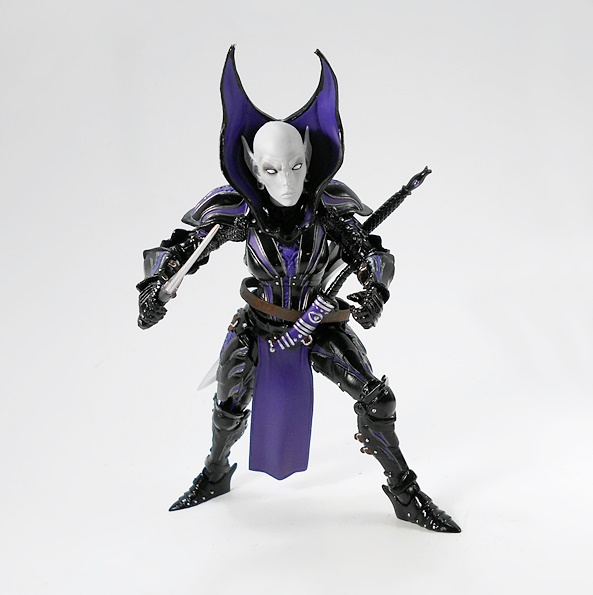 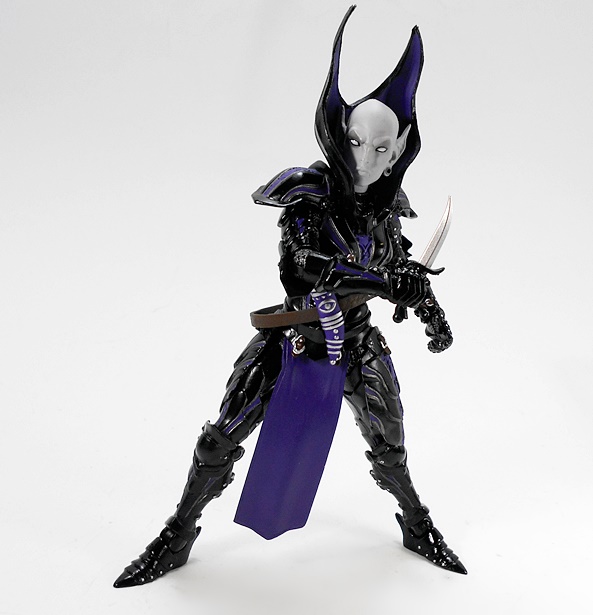 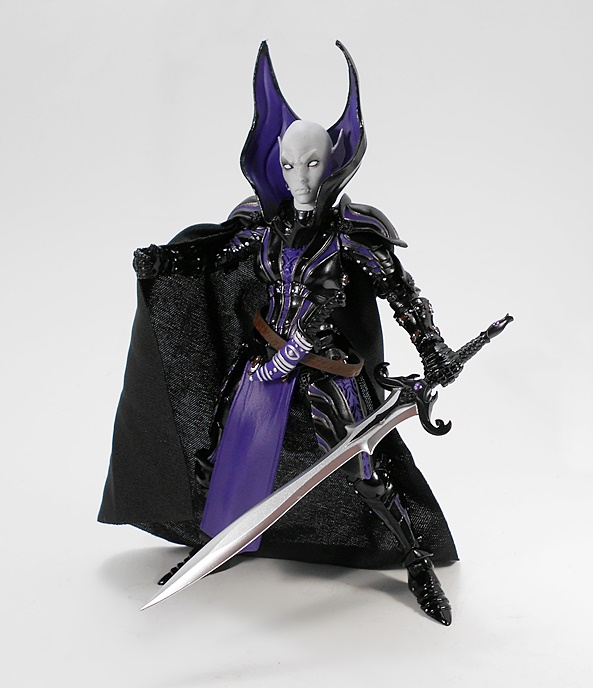 Is this the part where I say Lucretia may be my new favorite figure in all Mythic Legions? Well, I’m trying not to throw that word around as much this time, but she is simply awesome and well worth a consideration as one of the better figures in this line. The black and purple deco of her armor really sings to me, the quality of the paintwork is gorgeous, the weapons are well-curated, and all in all this figure has a lot of personality. She makes me excited to know that I have two more vampires from Advent of Decay waiting to be opened and that Carpathias will eventually be on the way.