[ Edit: Shortly after I posted today’s Marvel Monday Review, I heard the news that Stan Lee had passed away. I debated whether or not to post a separate tribute, but the more I tried to outline a piece that measured his impact on my life, the more I found that impact was immeasurable. I grew up reading almost every comic book I could get my hands on, but Fantastic Four and Spider-Man were among my favorites, and those are two books that have stayed with me the longest. But it’s simply impossible for me to recount the ways in which Stan Lee’s creations and imagination helped to influence my life from a child to a middle aged man, and almost every moment in between. I will, however, thank him for the fact that I never really did grow up. I’m 46 and I still read comic books and collect action figures, and have framed posters of Super Heroes on my walls. I’d like to think a big piece of that was because of him.

I did not know you, Stan Lee, but I loved you. Excelsior! ]

This week’s Marvel Monday is not a random grab, because if this huge box were in with the others, I’d wind up grabbing it every time. Nope, this one has been sitting beside my Legends Unopened Box of Shame and I just decided that this was the week to check it out. So let’s have a look at Black Widow and her motorcycle!

Remember when Toybiz did that line of Marvel Legends Riders? Well, I guess this is kind of like that. Only in that case a lot of the vehicles were pretty shitty. Hasbro seems to be doing it right this time by offering these figures in bigger boxes (and bigger price points!) to get us some really cool, full-sized vehicles. And given the 6-inch Scale of Legends it should come as no surprise that they’ve all been motorcycles so far, but I’m not complaining. The packaging looks great, it’s collector friendly, and it really shows off the goods splendidly. So let’s open this set up and start out with the figure.

I was expecting a straight repack of Natasha in this set, but we actually get an all new figure. And with all the Black Widows in my Legends collection, I’m happy to say that she still manages to bring a new look to the table. Indeed, this version strikes me as a nice balance between a classic version and a cutting-edge modern MCU version. Her bracers are silver and made to look like angled metal. These remind me of the ones she had in her earliest appearances. On the other hand the high collar and low zipper give her a bit more of a modern flare. The rest of the costume is just a black body suit and the painted belt consists of silver discs and the red Black Widow emblem. The costume is clean and simple, but looks great.

You get two different head sculpts, one with short hair and one with long hair, and I really dig them both. The paint applications for the eyes, eyebrows, and lips is all quite sharp, and there’s a little wash to bring out the detail in her red hair. The only thing here I don’t like is the big ugly seam that’s running down the center of her neck. Seriously, Hasbro? You couldn’t have hid that a little better? 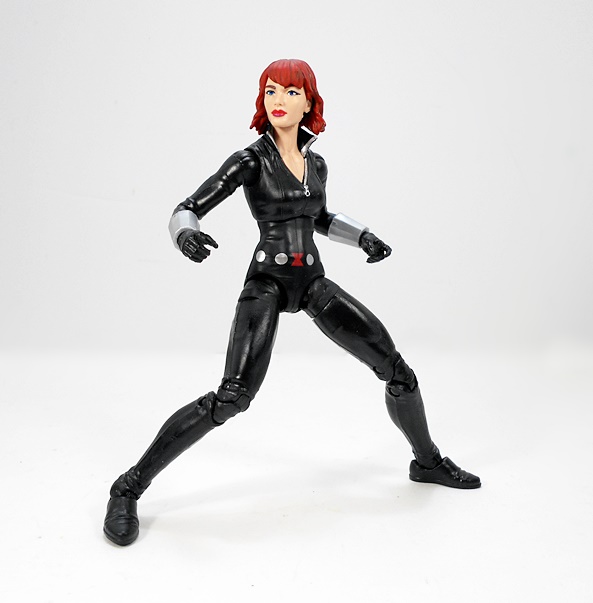 You get standard Legends female articulation. That includes rotating hinges in the shoulders, elbows, and wrists. The legs have ball joints in the hips, swivels in the thighs, double hinges in the knees, and both hinges and lateral rockers in the ankles. There is no waist swivel, but you do get a ball joint just under the chest, and the neck has both a hinge and ball joint. I’ve had the legs pop out at the hips a couple of times while posing her, but they pop right back in. It’s a shame she doesn’t have any guns, but the extra head is the figure’s only “accessory,” unless you count the motorcycle! 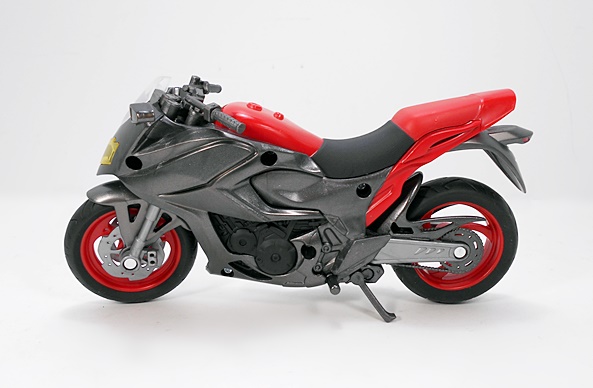 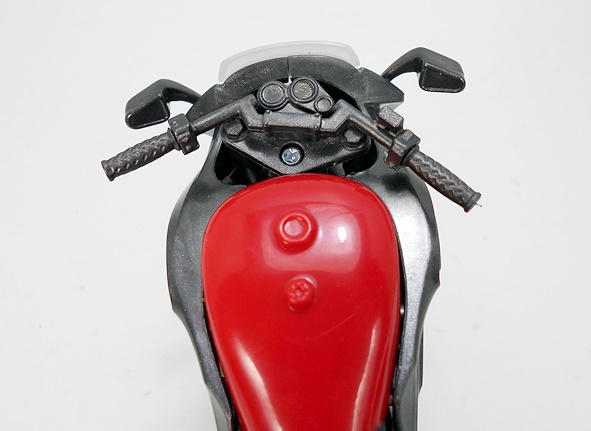 Like the figure, the motorcycle goes above and beyond what I was expecting. It’s a sporty bike with a red, gun-metal gray, and lighter gray deco, and you even get a Black Widow emblem on the right side near the front. Other nice touches include stickers for the instrument gauges, a tinted yellow headlamp cover, and I do believe the tires are made of rubber! Sculpted details include the engine and the chain drive, as well as a textured seat. The steering wheel turns the front wheel, you get a flip down kickstand, and holy hell, the suspension on the front wheel actually works! 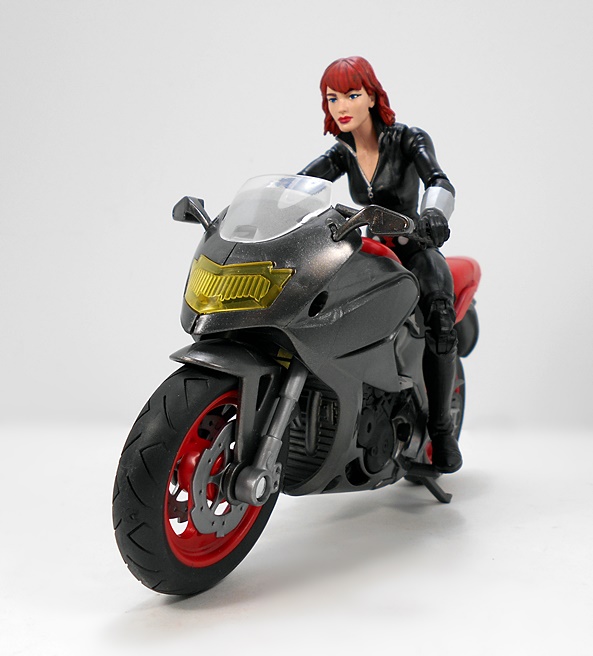 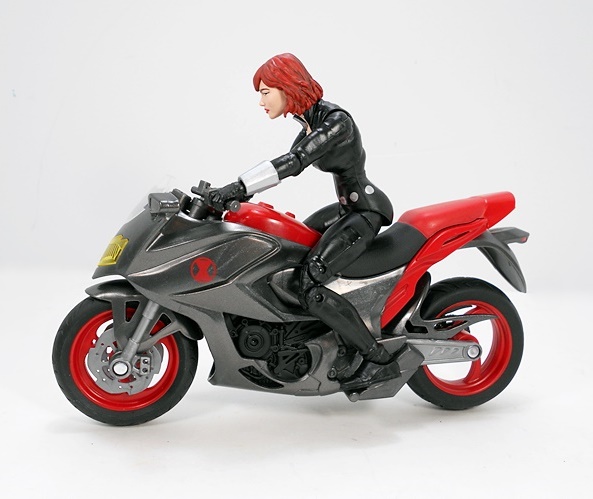 Even with all that good stuff, I think what delights me the most about this set is how well Natasha can fit on the bike. There’s no compromising here. I can get her to hold the handlebars, keep her tushie on the seat, and have both feet on the foot pegs and she looks she looks totally natural on it. The only thing worth noting here is that Natasha works better on the bike with the shorter hair, as it allows her to look up more. Also, that long hair should be flowing in the breeze when she’s riding, so it doesn’t quite work on the bike anyway. 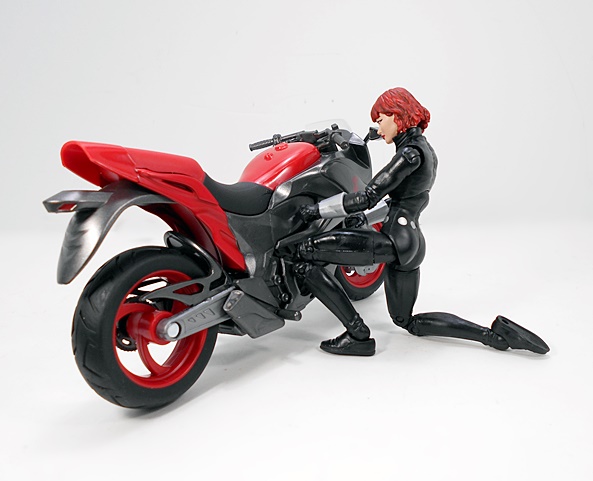 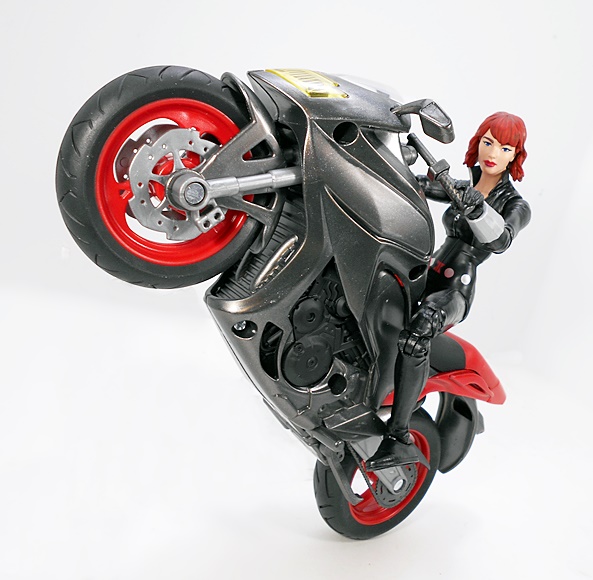 Even with pumping out an obscene number of figures, Hasbro is still looking for new ways to grow the Legends brand, and I think that’s fantastic! Especially in this day and age when vehicles are getting scarce in the toy aisles. What’s even better is this set seems to be around $30 at most retailers, I picked it up for a few bucks less, but either way it feels like quite a deal. The figure is excellent, and when you consider that Legends figures sell for around $20 these days, that leaves only about $10 for the bike. Not bad at all! It’s also got me pretty pumped to pick up the Wolverine and Ghost Rider sets then next time I see them!