I’m on vacation this week, which means I actually had time to resurrect Anime Saturday! And while I won’t make any promises, I’m really trying to bring it back on a semi-regular basis, because the Prize Figures and Figmas have been stacking up quite a bit. Today I’m opening up another one of Banpresto’s Flag Diamond Ship figures and this time it’s the Princess of Alabasta herself, Nefaltari Vivi! 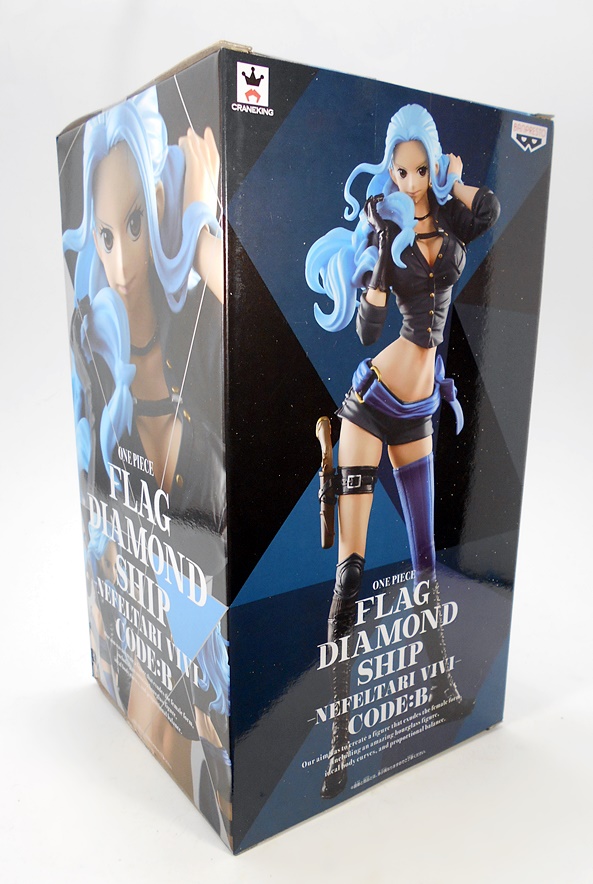 As always, the figure comes in a fully enclosed box with some shots of the statue and the deliciously weird mission statement of the series, which includes delivering the female form’s “amazing hourglass figure, ideal body curves, and proportional balance.” OK! For some reason, I got it into my head that the Code B meant it was the second version of the character in the series, but I’m pretty sure this is first time Vivi has appeared. Anyway, this roughly 9-inch scale figure requires a bit of minor assembly, so let’s get her set up and check her out! 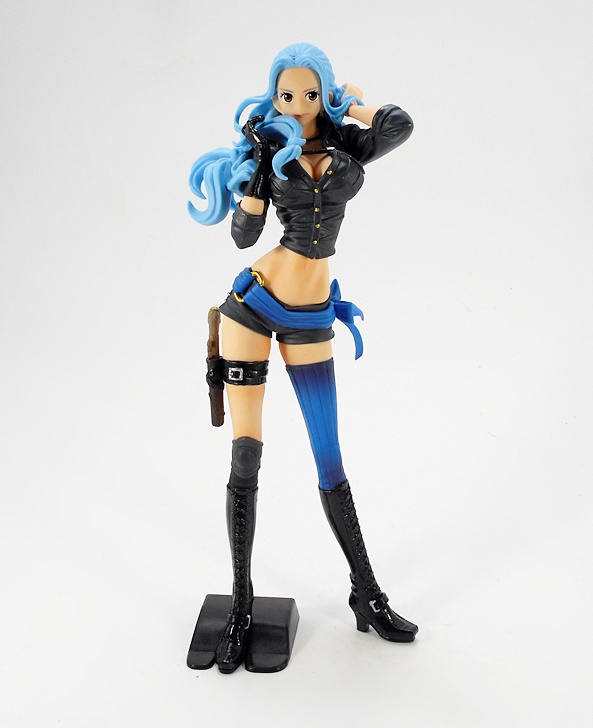 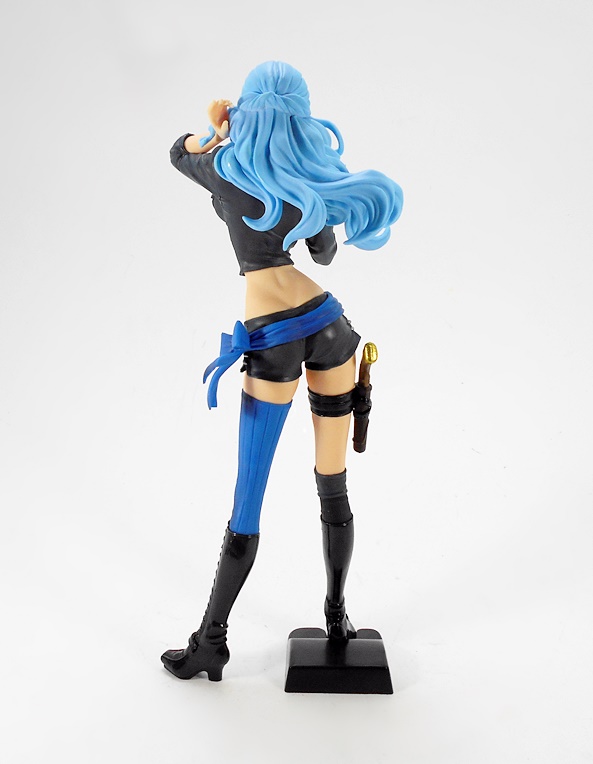 And here she is all put together and looking… well, nicely put together, if ya know what I mean! Early on, I thought they were going for a strong pirate theme in this line, but it seems like that’s not necessarily the case. That’s not to say I don’t like what I’m seeing! Vivi sports a black button-down half-shirt, which also only happens to be about halfway buttoned. Thankfully there’s a strap across her chest to hold it together. The sleeves are rolled up just below her elbows and she has one glove on her right hand.

Moving down, she’s got black short shorts with a blue sash tied around her waist, a flintlock pistol strapped to her right thigh, a knee below that, one thigh-high blue stocking on her left leg, and a pair of very tall glossy black boots with sculpted laces and buckles. It may not be traditional pirate garb, but I really dig it.

Overall, the paint is pretty solid on this figure. I love the gradient blue coloring on her left stocking, it gives me a bit of a Harley Quinn vibe, and the high gloss black used for her boots and glove looks great. Some high points of the applications include the individually painted brass buttons on her top, the silver buckles in her boots and holster strap, and the gold ring on her right hip, that’s holding her waist sash together. The brown used for the holster is a darker shade than the pistol itself, and while they painted the butt cap on the pistol gold, they neglected to paint the rest of the fixtures on the gun. This omission is really the only complaint I have about the paintwork on this figure, as it is the gun looks like it’s made out of chocolate! 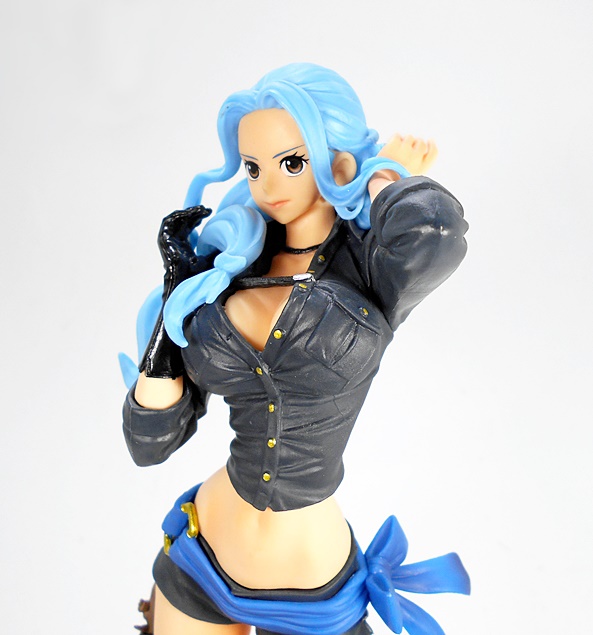 The portrait is excellent. Vivi’s big eyes are perfectly printed, along with her lips and eyebrows. The pose has her gathering up her long blue hair, which is flowing wildly all around her. While the detail is overall great on the figure, I think it’s the hair that really sells this sculpt the most to me. 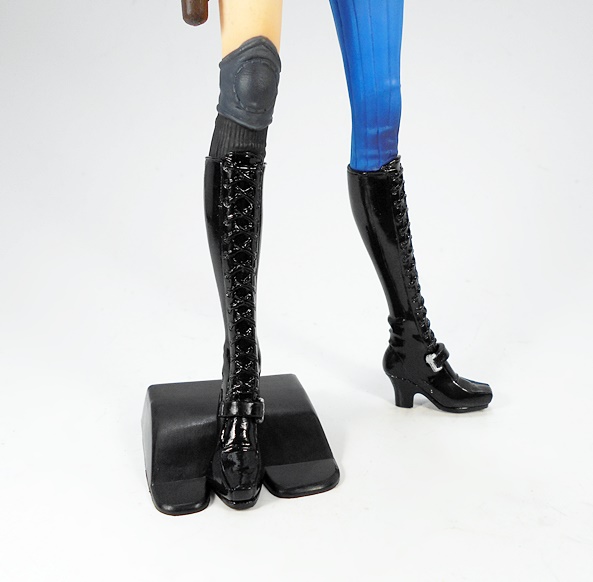 Banpresto has experimented a bit with the bases in this line. They started out using a large circular disc with the first Nami, then they went with a little pile of gold for the second figure, Boa Hancock. Now it seems like they’ve settled for using just black chunks of plastic that pegs into one of the feet. I like these, as they don’t take up as much space as the conventional bases, but I kind of wish they kept the treasure motif, because it actually looked likes something and not just a hunk of black plastic. I know some collectors have had issues with the stability on these stands, but mine have been pretty good. They fit flush with the shelf and they do their job keeping the figures upright. 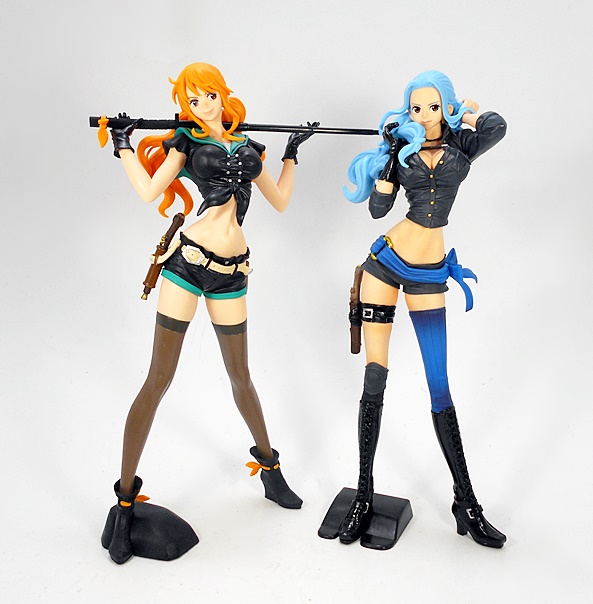 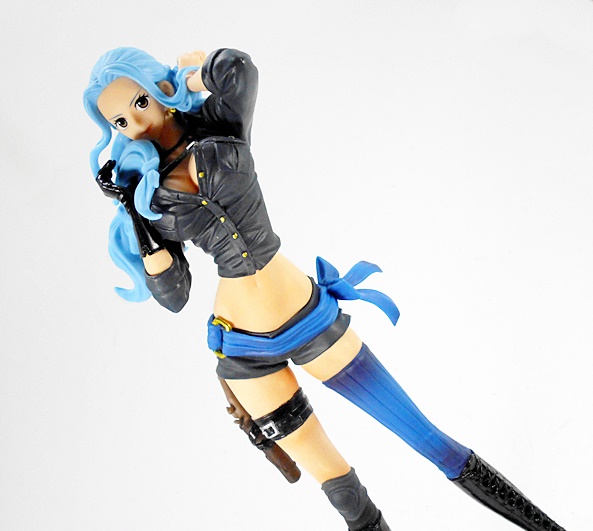 Four figures in, and I have to say that I’m still a big fan of this line. The costumes are creative, the ladies are beautiful, and the quality is certainly there for the price point. And speaking of which, I’ve found that pricing on this line has been anywhere from $20 all the way up to $30, depending on where I get them. It seems like pre-ordering them is the way to go, as I got Vivi here for $20, but I’m probably going to cough up $30 for the Nico Robin I missed out on. Twenty bucks feels like a great value, whereas thirty is right up at the ceiling.