I only caught Solo once in the theaters, but I picked up the Blu-Ray when it was released and I’ve re-watched it three times since then. It’s a movie that continues to settle in my heart as an example of what these Star Wars Story films should all be aiming for (if and when they do any more) and it introduced some fun new characters into the Star Wars Universe. One of those was the Ardennian pilot, Rio Durant, may he Rest In Piece. Oh, um. Spoilers? 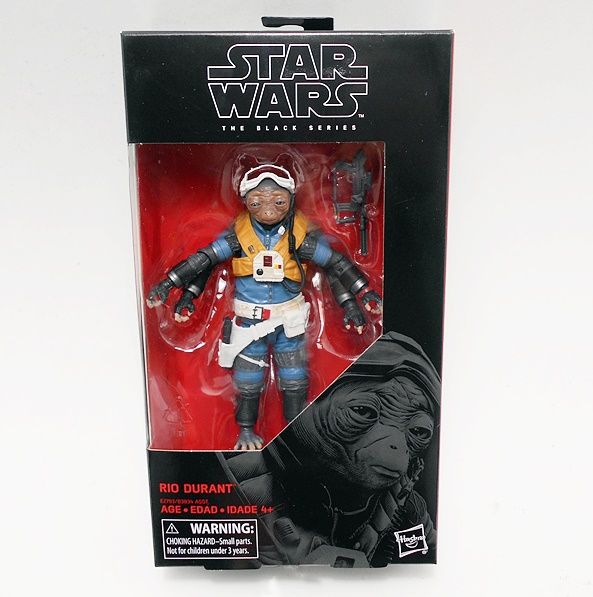 Dialing in at figure #77 in the current series, Rio was one of those characters that I wanted to get as a figure the moment I saw him. He was likable, and his weirdly endearing alien design made him a great choice for the plastic treatment. But as news of Solo‘s disappointing earnings filtered in, I would have bet real money that a Rio figure was just a pipe dream. The tooling and articulation needed for the extra set of arms would be extensive, and I was convinced the Black Series Solo figures were going to be a one and done wave. But happily, Hasbro proved me wrong and here he is, so let’s open him up and check him out! 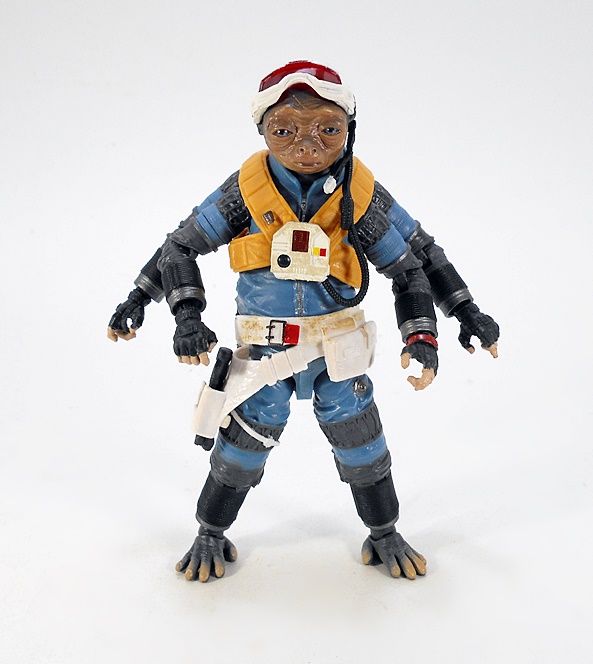 With Rio out of the package, I find myself instantly impressed with all the work Hasbro put into this guy. I mean, seriously, we’ve had figures of main characters in the Original Trilogy that don’t feel nearly as well executed as little Rio here, and while he was far from a background character, he didn’t have a huge amount of screen time either. So, where do I even begin? Well, let’s start with his flight suit. It’s a unique looking suit, but it still has that unmistakable Star Wars flavor to it. It’s mostly blue and gray with some silver and red highlights. I dig the tightly compressed bands of rings on the sleeves and lower legs, as the sculpted lacing reminds me a bit of the Compression Suits from Alien. 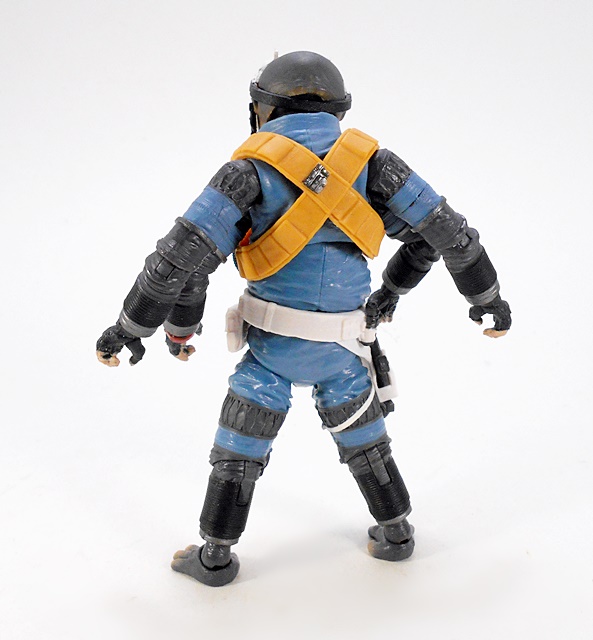 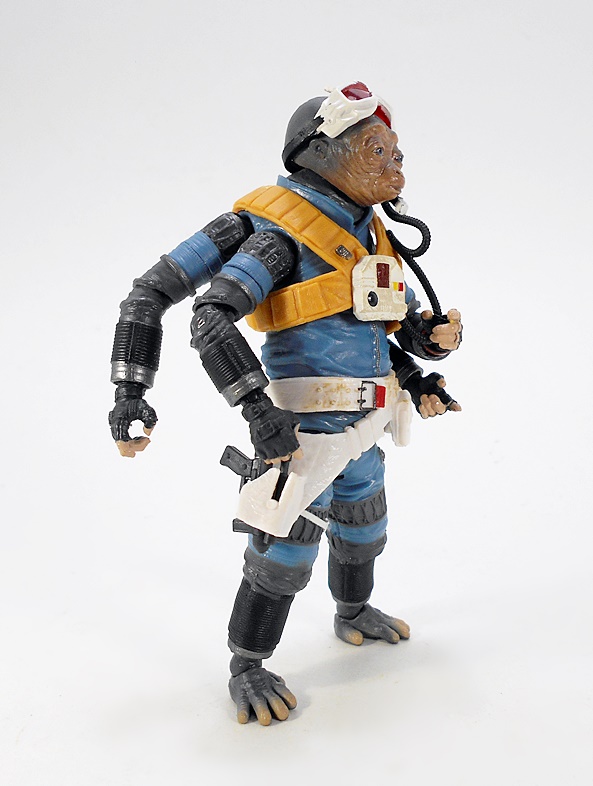 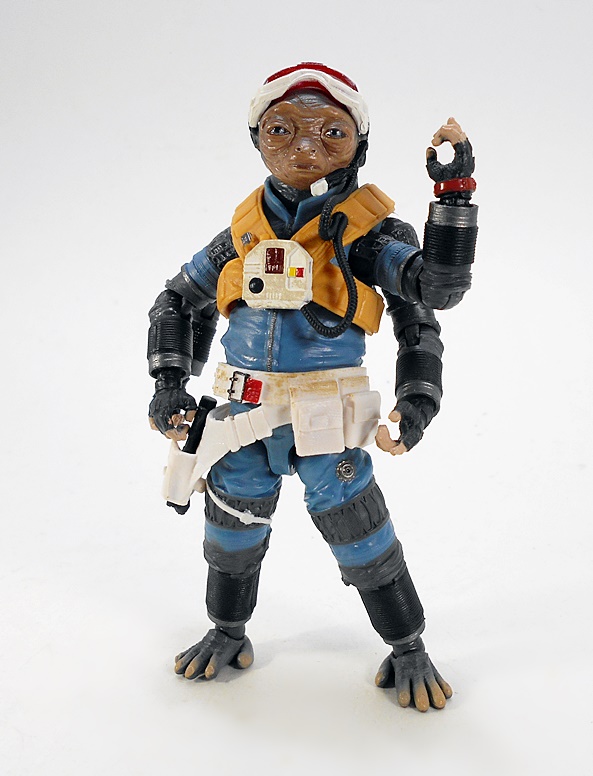 The control box on his chest is a separate piece held on by the wide, orange harness. There’s a hose that runs out of the box, connects with the left shoulder strap, and then connects to the microphone and earpiece on his head. The harness and box features some great sculpted detail and extra paint hits. The white belt is also sculpted separately and has plenty of detail, including a tiny belt buckle, pouches, and a functional holster for his blaster pistol. There’s a little bit of weathering on the belt, but I think it should have been applied more heavily and evenly throughout. I think the fact that the belt and holster are too bright and new looking is the only nitpick I can come up with. 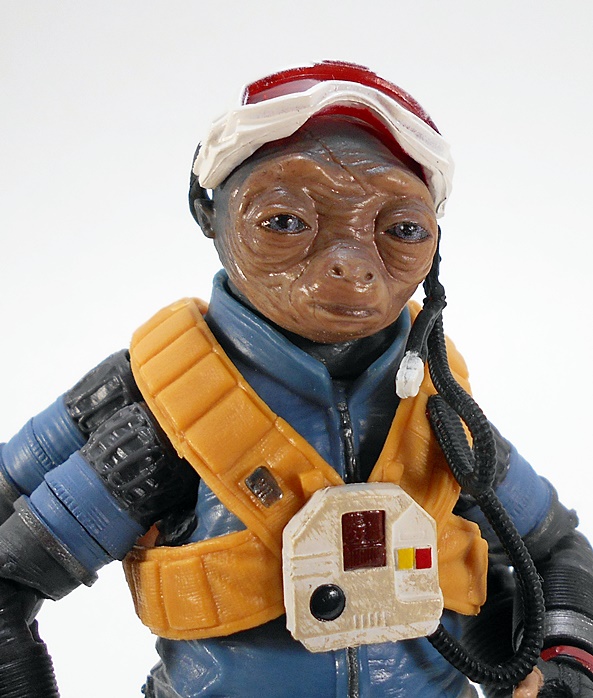 The head sculpt is excellent, but then the Black Series has always been great at recreating the aliens. All his little wrinkles are present and the gradation in skin tone from the brown in his face to the blue-gray in the back of his head is well done. There’s also a notable scar running across his forehead, and I’m not sure if that’s screen accurate or just a mishap in the mold, but either way it adds some character. I think the only thing missing are his whiskers, and that would be tough to do in this scale. 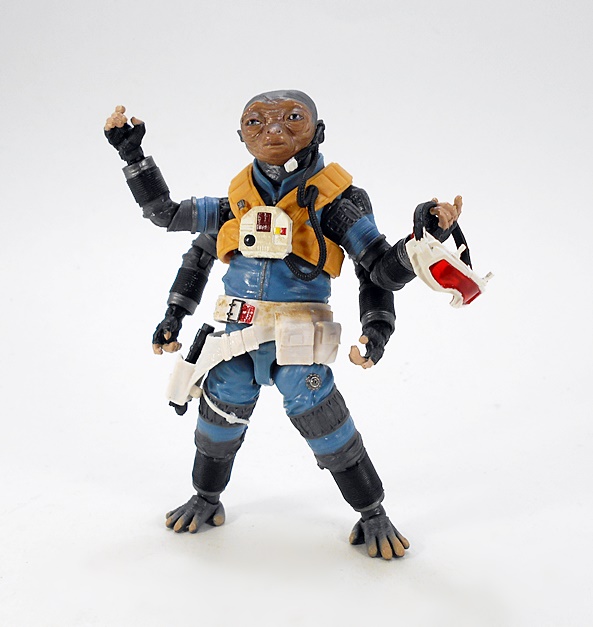 I was surprised to see that the goggles are sculpted separately and can be pulled down over his eyes, or removed altogether. What a great touch! The strap is sculpted in soft plastic and there’s a translucent red piece for the lens. 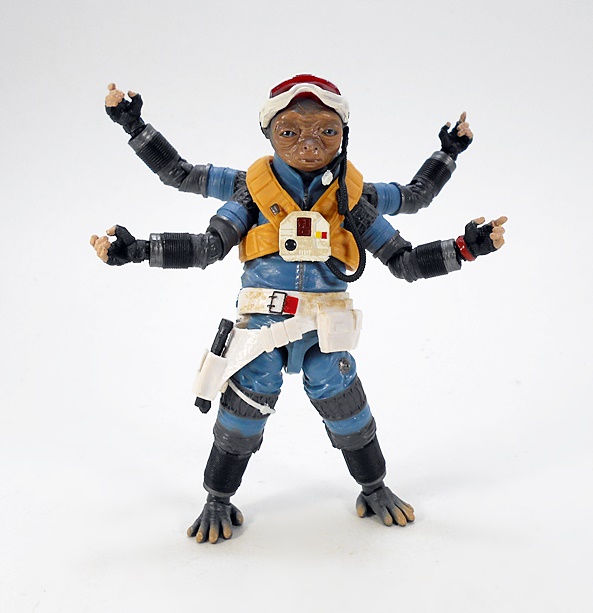 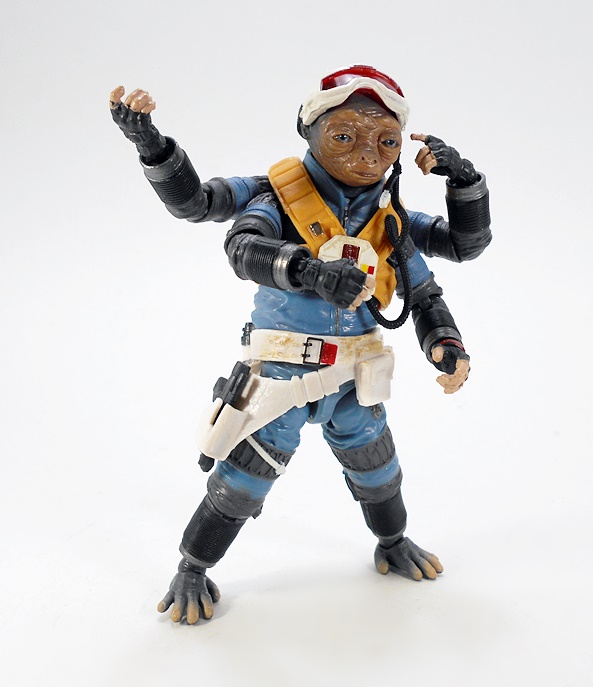 So let’s talk arms!!! I was particularly interested to see how they were going to do his arms, and they look pretty damn natural, with one set connecting to the body just a bit above and behind the other. His four hands feature finger-less gloves and he’s got a red band around one of his left wrists. And so long as we’re talking arms, let’s go into articulation. Rio has got it in spades, which is especially cool for such a short figure. Each of his arms have ball joints at the shoulders, elbows, and wrists, and swivels in the biceps. His legs are ball jointed at the hips and have rotating hinges at the knees and ankles. There’s a ball joint in both the chest and the neck. The range of motion on most of these joints is very satisfying and I’ve been having a blast playing around with this guy ever since I got him. 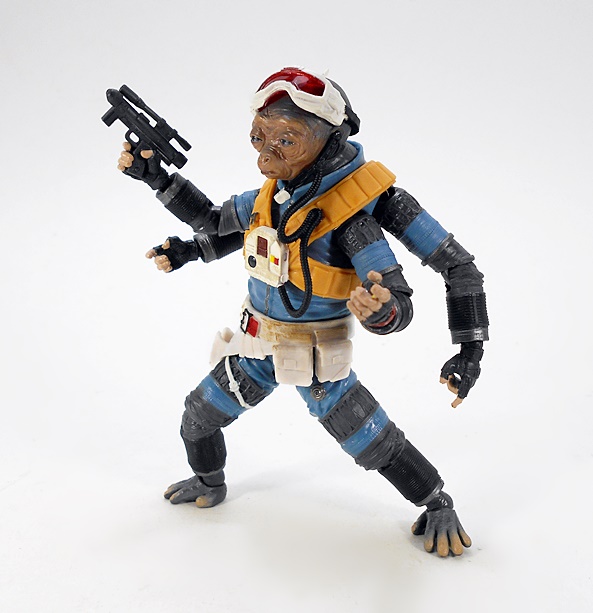 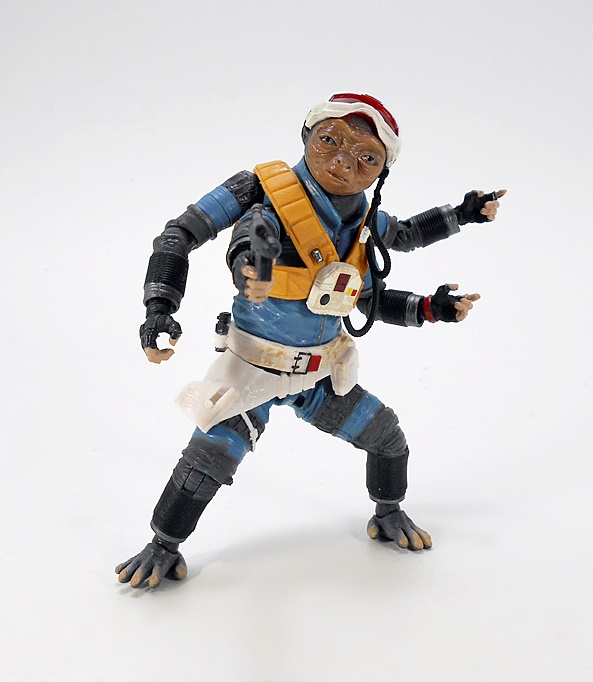 Rio comes with two weapons and he can hold either in any of his four hands. The first is a scoped blaster pistol that fits into his holster. 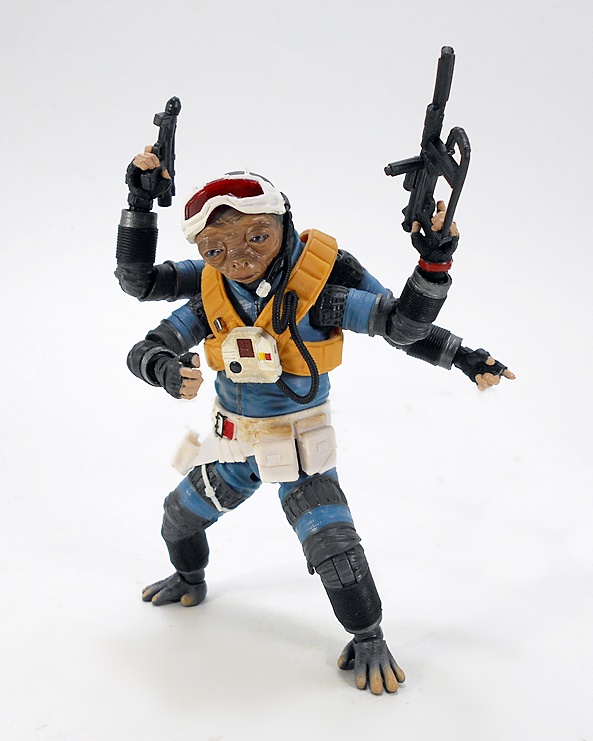 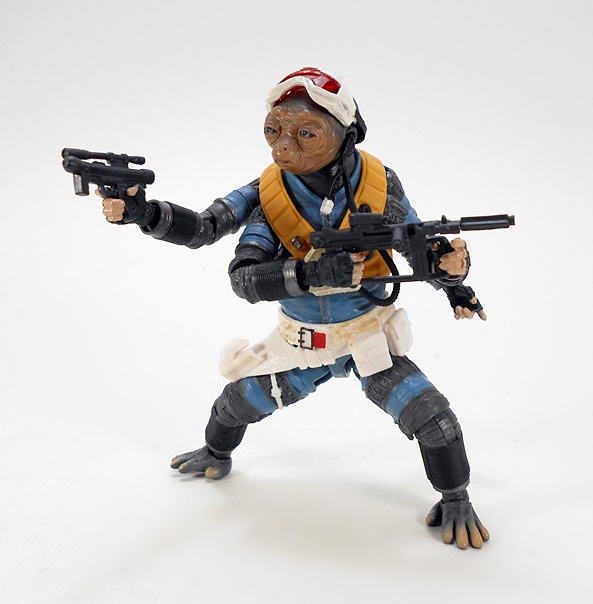 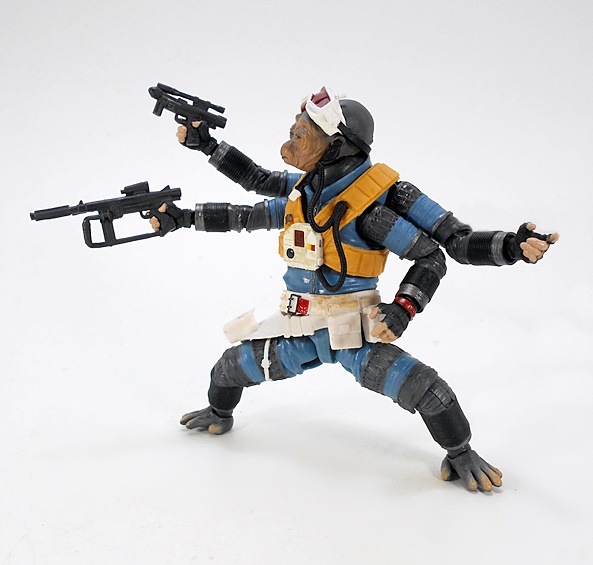 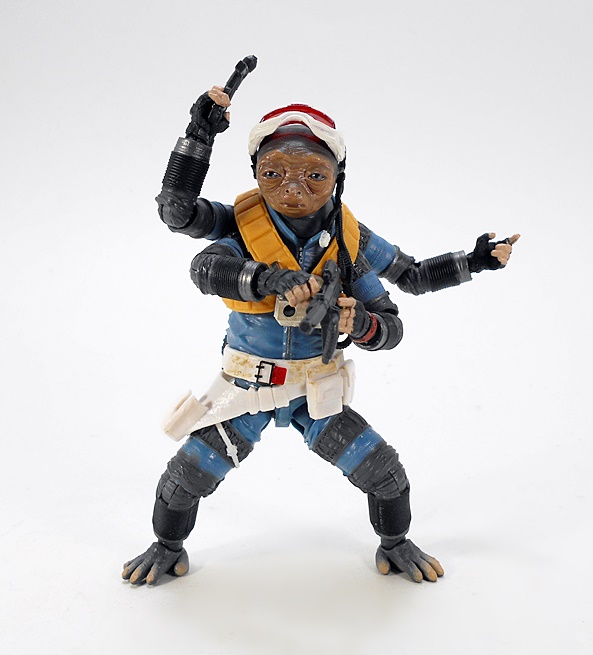 The second is what looks like the blaster equivalent of a sub-machine gun. In addition to the regular grip, this has a grab bar coming out of the side and a second grip under the barrel. Both of these are cool and unique designs and very welcome additions to my collection of 6-inch scale Star Wars weaponry. 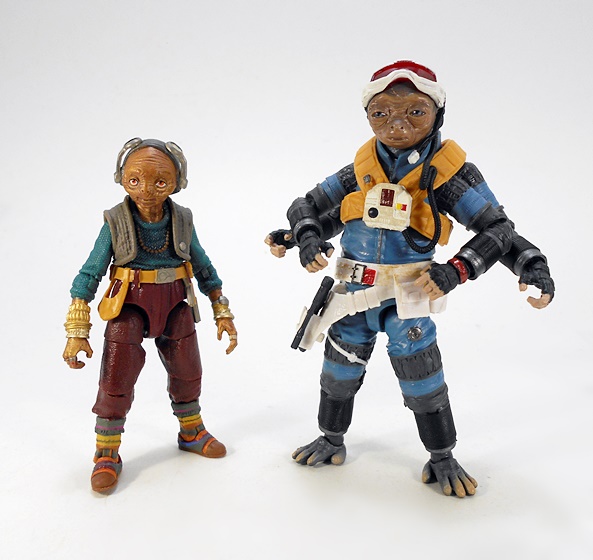 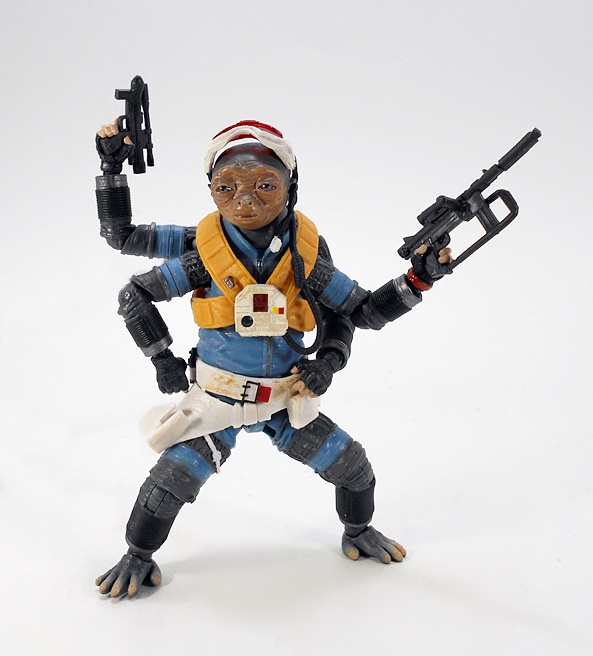 For a line that sometimes feels pretty damn mediocre, Star Wars Black has a distinct way of surprising me just enough to keep me collecting it. Rio is one of those figures. He’s an absolute homerun, featuring some fantastic sculpting and paintwork and a perfect execution of a cool alien design. This is exactly the kind of figure I expect out of what is supposed to be a premium collectors’ series. I dig him so much, if I had any skills as a DIY person, I’d already be building an Imperial AT-Hauler cockpit for him to sit in. For all the shit I give Hasbro for the Black Series figures they clearly phone in, I’ll happily give them the highest of praise for this one. Fantastic work! Now I just have to hunt down Beckett and Val!