Three Saturday Anime reviews in a row means It might be becoming a habit again, which would be great because I have a big backlog of Prize Figures and Figmas to open and review. Then again, with the Silly Season upon us, my time will be getting tight again, so we’ll see how this goes. Today I’m getting completely caught up with Banpresto’s Flag Diamond Ship series with a look back at Nico Robin. I missed this one when it first came out, so I had to double back for her. It cost me a little bit extra, but I didn’t get beaten up too badly.

As usual, this roughly 9-inch scale figure comes in a fully enclosed box with lots of pictures of what’s inside. It’s collector friendly, and I dig these boxes because, rather than tossing them, I can flatten them out and file them away so they don’t take up a lot of room. There is some minor assembly required here, mainly putting the two halves of Robin together at the waist and while the fit was a little tight on this one, I was eventually able to get her set up and ready to go.

I’m fond of pointing out that my first two figures in the Flag Diamond Ship series, Nami and Boa Hancock had a strong pirate flair to them and after that the series just started doing it’s own thing. Well, Robin here fits more closely with the design of those first two figures, but she’s still sporting something of a pirate-cowboy mash-up. She’s also one of the simpler designed figures in the series, as there isn’t a whole lot to her costume, and I mean that both literally and figuratively. Robin sports a tan jacket with red liner, which she is holding open to expose her skimpy black bikini-style top. Moving downward, she’s got a black micro-skirt with a wide gray belt, and finally, a pair of brown buccaneer boots. The ensemble is punctuated by an oversize brown fedora, a multi-colored head scarf, and a single flintlock pistol strapped to her right thigh. 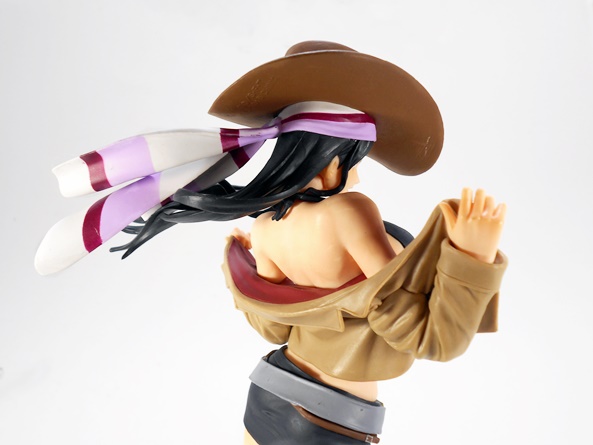 The portraits in this series have all been great, and Robin does nothing to buck that trend. She sports a somewhat serious expression with her hair and the head scarf both blowing off behind her. Her facial features are perfectly printed and the white, purple, and lavender pattern of the scarf is also neat and clean and offers a nice contrast to her black hair. The fedora is tipped down low over her face, so this is a statue that really demands being displayed at eye level if you don’t want to obscure her pretty face. 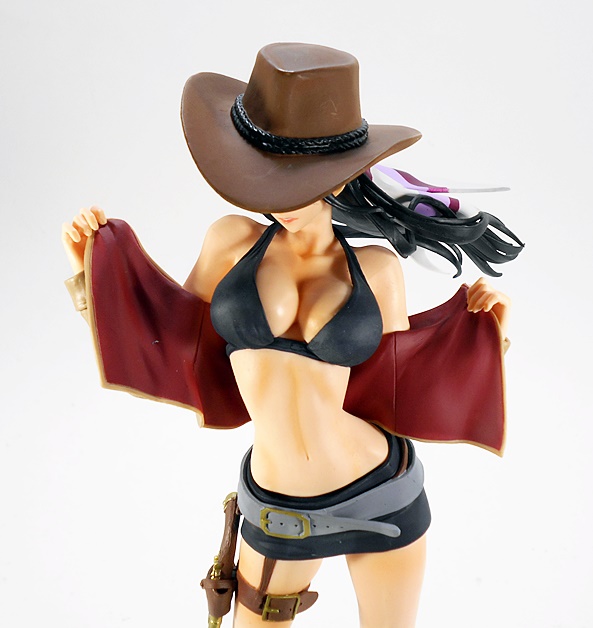 I’m not sure whether Robin is putting on her jacket, taking it off, or just flashing her goodies, but whatever the case I like the pose. As I mentioned there isn’t a huge amount of detail here, but that’s more because of the style and not an intentional omission. Most of the outfit’s detail can be found in the boots. They have a cool suede look about them, with sculpted gold painted fixtures and laces. There’s a nice braided band around her hat, and the jacket features stitch lines on the outside as well as the liner. Finally, they put some excellent work into the flintlock. The paint is simple, but overall pretty clean and her skin tone looks great. 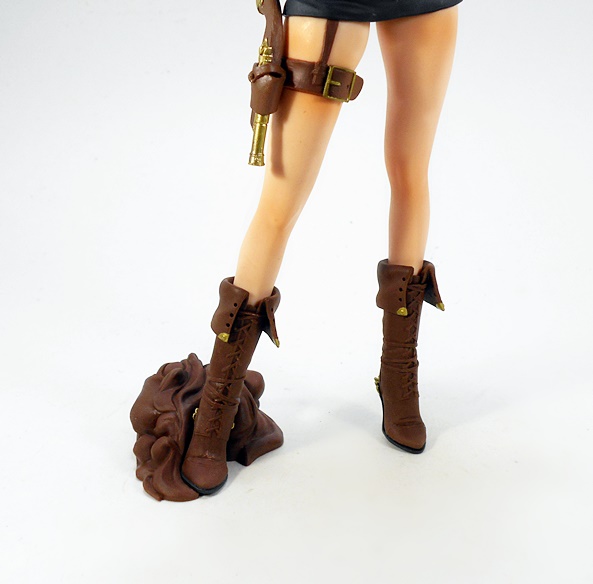 Rather than traditional bases, this line has been using plastic pieces that fit into one of the figures’ feet as a stand. The more recent releases have abandoned the effort to make these pieces look like anything other than hunks of plastic. Robin’s on the other hand is sculpted to look like… eh, a crumpled piece of cloth? Maybe? I don’t know, but whatever it is, I like that they gave it some detail. Unlike some collectors, I haven’t had any major issues with these unconventional stands, although Robin’s doesn’t fit quite as flush as the others so there is a tiny bit of wobble to her. 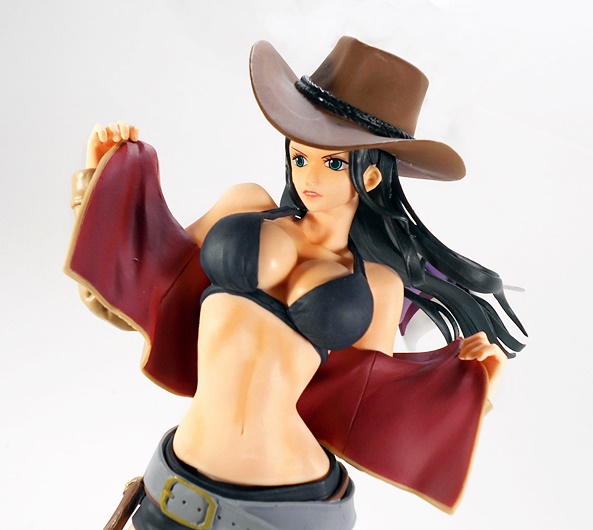 When I pre-order these figures, I can usually get them for between $20 and $25, but I had to go to hunt Nico Robin down and she set me back a full $30, and you know what? She was still well worth it. The quality on these figures continues to impress me and at about 9-inches tall, they make for impressive display pieces. These are definitely not what I tend to think of when I think of Prize Figures. As of now, I believe Banpresto has three more of these figures planned, including second versions of both Nico Robin and Boa Hancock, but it doesn’t look like they’ll be arriving until next year.

One comment on “One Piece: “Flag Diamond Ship” Nico Robin by Banpresto”