No random review for this week’s Marvel Monday, as I picked up the Walgreen’s Exclusive Magik last week and was so excited that I bumped her to the head of the line. And to truly appreciate how excited I am, you have to realize that I’ve been jonesing after this figure since 2015 when she was released as part of the SDCC Exclusive Book of Vishanti boxed set. I missed the window to buy that set and wasn’t willing to pay what secondary sellers were asking for it. I had basically written her off, but thanks to this unlikely partnership between toy-maker and corner drugstore, I’ve finally got my mitts on this magical minx.

Magik is actually the third figure in that set to get a regular retail release, as we eventually got Brother Voodoo, and Dormammu turned up as a Build-A-Figure. That just left me missing the comic version of Hela and the Astral version of Doctor Strange, and I guess I can live with that. The package features the X-Men logo on the front and a Walgreens Exclusive sticker on the front. And one look at the tray shows that this box is crammed with goodies, so let’s get started!

And here’s Illyana freed from her cardboard and plastic Limbo, and what a great looking figure she is! The costume is comprised of a mix of paintwork and sculpted detail, with the paint making up the sleeves and glove on her right hand, the upper part of her thigh-high stockings, and her shorts. The top is sculpted with some raised lines and a Power Girl-style boob window, the goth boots each feature a brace of straps and buckles, and her left arm and shoulder features her Eldritch armor that appears via the Soulsword. The ensemble is tied together by a wide black belt with silver painted buckle and eyelets. I’ve got to say, both the sculpted detail and paint on this figure is especially sharp. It’s worth noting that there are a few differences between this release and the one packed in the SDCC set. Most notably, the boots were simply painted on the SDCC version, whereas this Magik is borrowing Nico Minoru’s footwear. 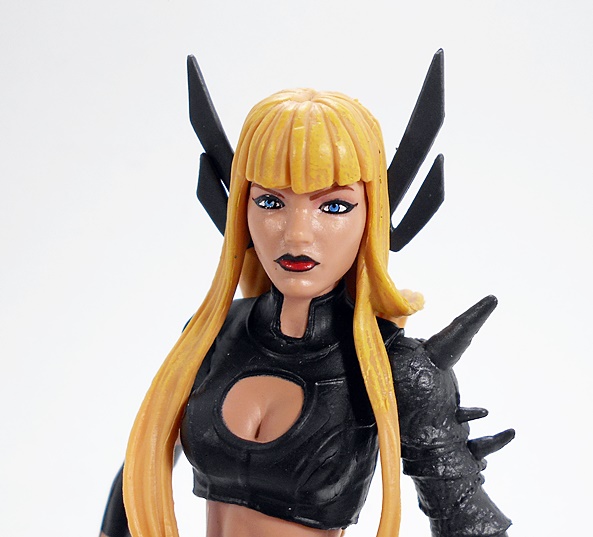 The portrait is every bit as impressive as the rest of the figure. Again, the detail is sharp and the paint on the eyes and lips is immaculate. I especially dig the black added to her lipstick. He hair sculpt features a rather pronounced set of bangs with strands of hair falling forward over her shoulders, a third falling back over her left shoulder, and the rest cascading down her back. 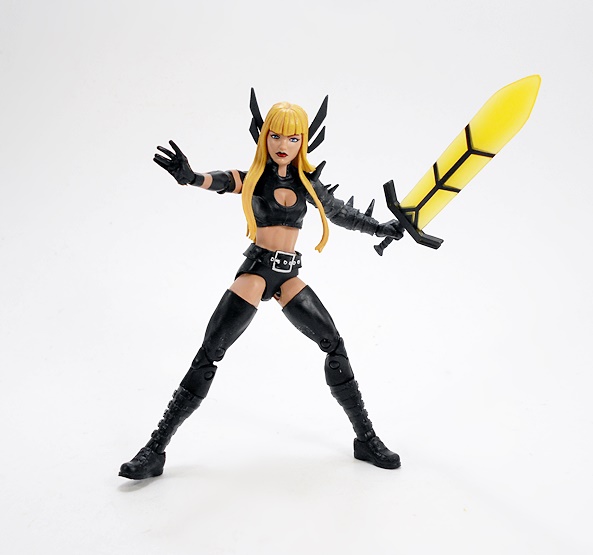 And if a great figure wasn’t enough, this tray also comes packed with extras, including two swords and a passel of magic effect parts. The obvious accessory here is The Soulsword and it is indeed a cool piece of magical cutlery. The extended grip allows for two-handed use, and the extremely broad blade is made of translucent yellow plastic with black lines running through it from the hilt. 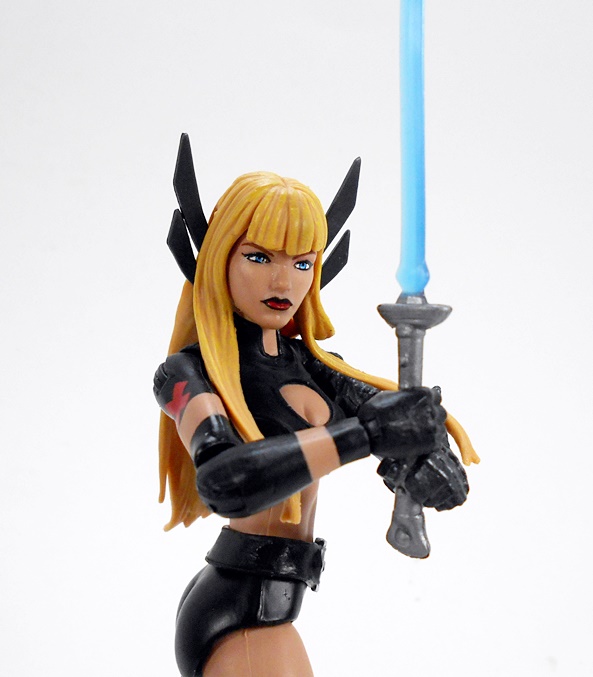 She also comes with this blue energy sword, which I can’t place from the comics, but that doesn’t make it any less welcome. It’s got an extended silver grip with not much of a guard, giving it a distinct lightsaber-y vibe. The translucent blue blade is thin and straight, and you also get a blue energy effect part to snake around it. 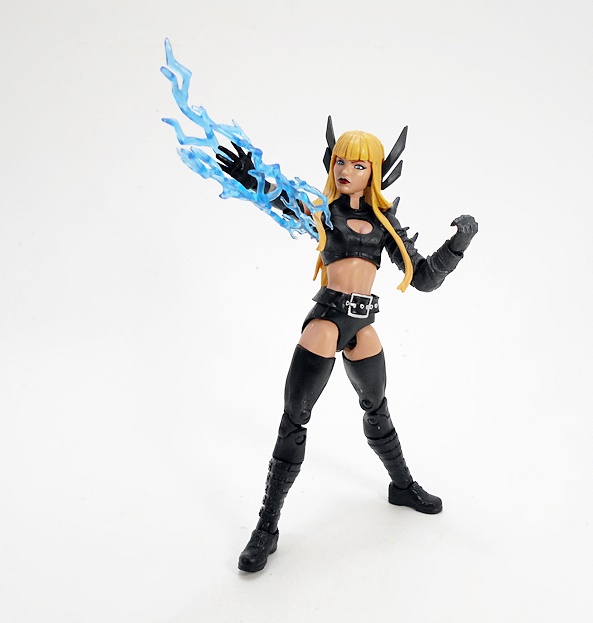 And if you dig that effect part, you’re in luck, because Magik comes with no less than three more! These are all similar blue lightning magic-energy pieces, and if you collect Star Wars figures, you’ll likely find these similar to the Force Lightning pieces that Hasbro sometimes likes to include with the Dark Jedi characters. You get two small ones, which are perfect for her hands, and a longer sleeve, which can go over either arm. I’m not usually a big fan of these pieces, but I’ll confess I’m having some fun with these. 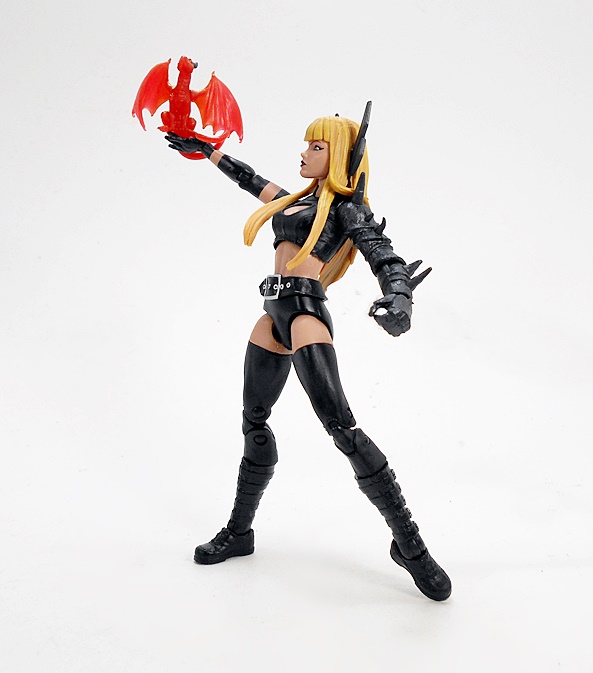 I’m at a total loss for explanation over the red repack of Kitty Pryde’s Lockheed. I thought it might be some reference to the link between Shadowcat and Magik in Limbo or just something I never came across in the comics. Or maybe it just looked magical and Hasbro wanted to get some more use out of that rather particular sculpt. Either way, this little dragon is cast in a translucent red gummy-like plastic and actually features some paint applications, including some gold to bring out his scales and some black for his horns. He’s neat! I dig him!

Finally, Magik also comes with a flaming skull, and it doesn’t take an astute student of Marvel Legends to recognize this as one of Ghost Rider’s noggins. Why the skull? Eh. It’s creepy and magic-y and who’s going to complain about getting a burning red skull as an accessory? And yes, the jaw is also articulated and there’s still a ball socket up in there if you want to use it as a head on one of your other figures. 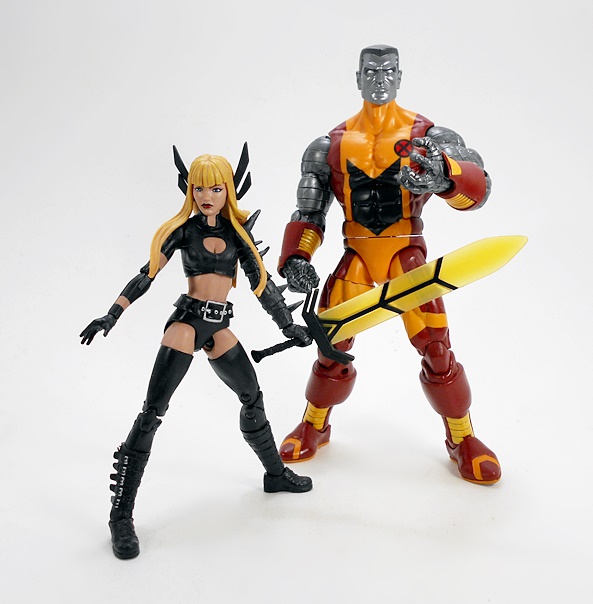 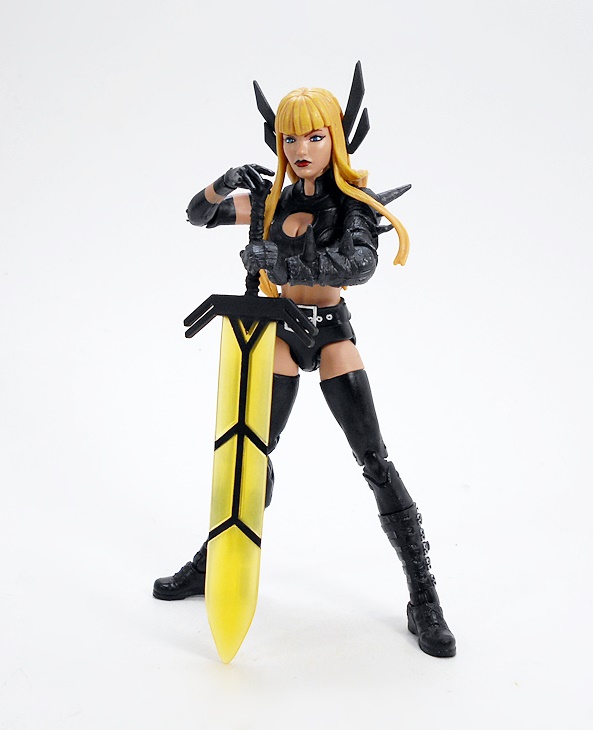 If you’re like me and you missed out on the SDCC version, than this release of Magik is a real treat. Not to mention that as far as I’m concerned, I think this one is actually the better figure. It was really weighing on me that I missed out on this figure back then, but this is one of those cases where everything worked out for the better. She’s an amazing little figure, with a great inventory of accessories, and a welcome addition to my X-Men Legends!