Here we go! It’s the very last Marvel Monday review of 2018 and I am still ridiculously far behind on my Marvel Legends, but I’m so very glad to be ending the year with a figure from Infinity War. As far as movies go, that one was one of the highest points of the year for me. So much so, that I’m going to be ending the year watching it on Blu-Ray tonight for the the umpteenth time. So let’s get right down to business so I can watch my movie and you all can go about your New Years Eve business!

For all intent and purposes, Cull Obsidian is the Black Dwarf of the MCU’s Black Order and only the second of Thanos’ minions (so far!) to get a figure in the Legends line. He’s comprised of seven parts, if you include his weapon, spread out over all six figures in this wave, with the weapon being doubled up with one of the arms. Before slapping him together, it’s worth mentioning that this figure deviates a bit from his look in the film. The body and head sculpt both look pretty much on point, but he wore a lot more armor in the film. Is this one of those cases of Hasbro being given early concept art to work with? Probably. Does it hurt the figure? Not necessarily. 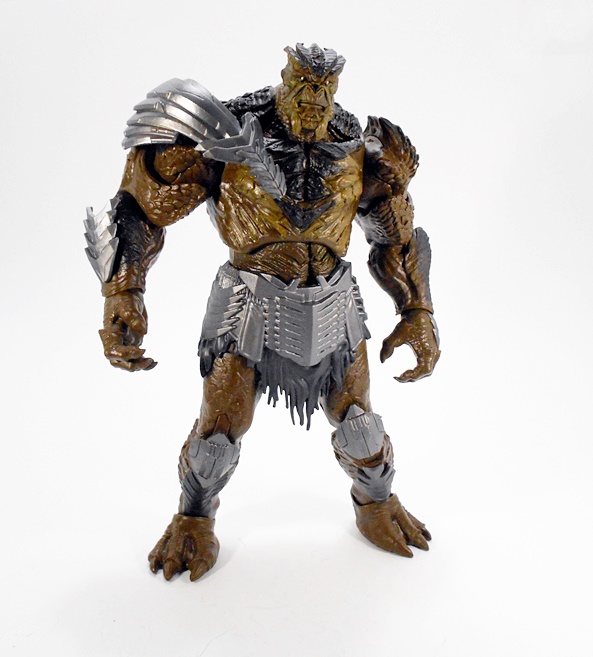 Sure, if you’re looking for a perfect representation of Cull Obsidian on the big screen, you’re going to be disappointed, but with that having been said, I think this guy turned out fantastic. This fellow is a good head and shoulders taller than his boss Thanos, and that makes him pretty imposing when compared to the regular-sized figures. He’s a big reptilian brute covered in scaly skin, with ridges on his shoulders, powerful hands, and three-toed feet. He kind of looks like something you’d find Duke Nukem fighting, and that ain’t a bad thing. As mentioned, the armor is quite different than what he wore in the film. Here he has grieves on his lower legs, a metallic armored belt with sculpted plastic cloth hanging down in tatters, a segmented piece of armor on his right forearm, and a massive piece of armor on his right shoulder, which is actually a separate piece and can be removed if you want to. 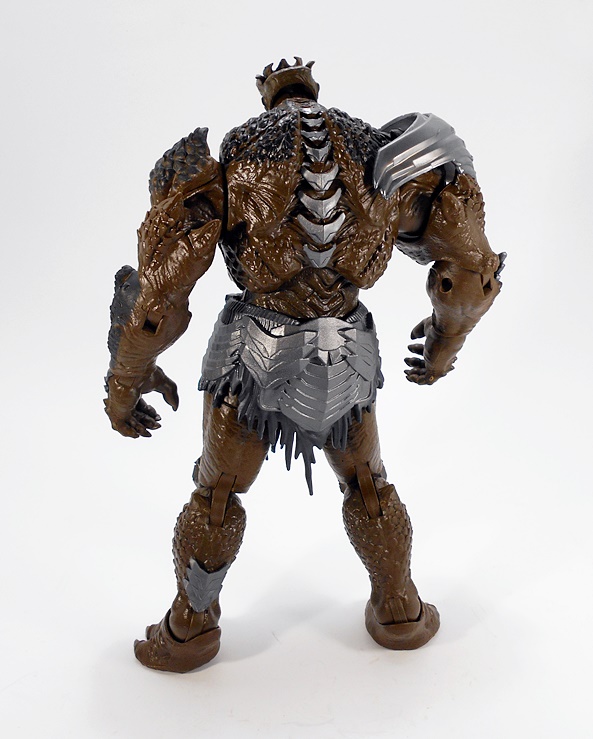 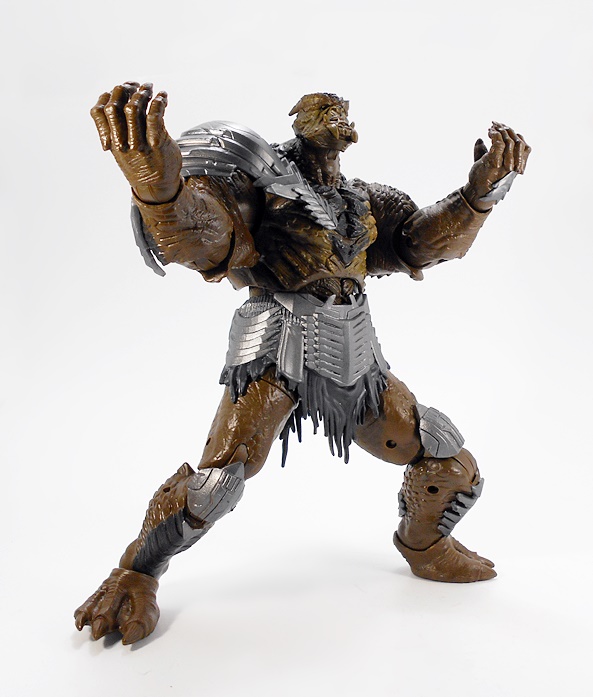 From the back, you can see armored plates running up his spine and a single armor plate stuck to his lower left leg. The coloring is mostly brown with some black wash to bring out the details, and some yellow-brown added to his chest. I would have loved to see a little wash on the armor, as it looks rather flat when compared to the rest of the body. The body features solid articulation for such a big guy, indeed it’s basically the same as what we get in the regular releases. The arms have rotating hinges in the shoulders and wrists, the elbows are double-hinged, and there are swivels in the biceps. The legs have ball joints in the hips, swivels in the thighs, double-hinged knees, and both hinges and lateral rockers in the ankles. There’s a ball joint under the chest and the neck is ball jointed. As expected, this guy is as solid as they come, and he’s loads of fun to play with.

The head sculpt is a thing of beauty, and by that I mean it’s ugly as sin. Like the body, the portrait looks pretty close to the character seen in the film. I love the tiny piercing gold eyes, and the things on his chin and lower jaw that look like tusks. There’s some wonderful detail in the lines of his face, the ridges on his head, and all the other little scales and bumps. 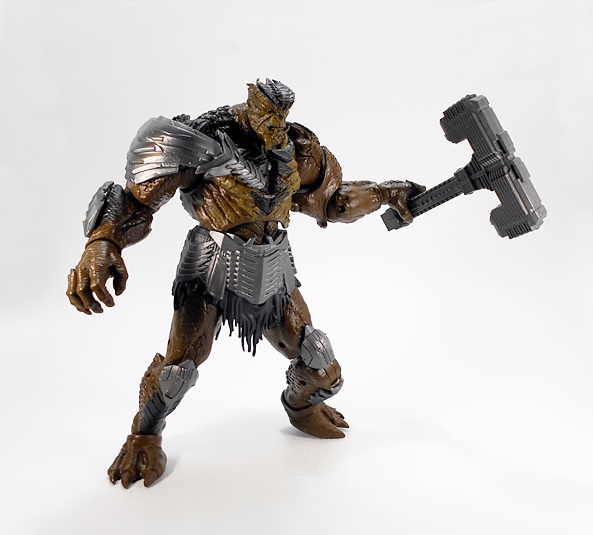 If this figure disappoints at all, it’s definitely because of his weapon. In the movie he carried a cool axe that could shoot the head out on a chain. It looked like it was made out of space junk, but really cool looking space junk. Here we get this hammer thing that looks like a lame Minecraft weapon. It kind of has an MCU Kree technology flavor to it, but I just don’t dig it. He can only hold it in his left hand and while I’m sure he could do some major damage with it, I’d much rather we got something closer to the weapon in the movie. 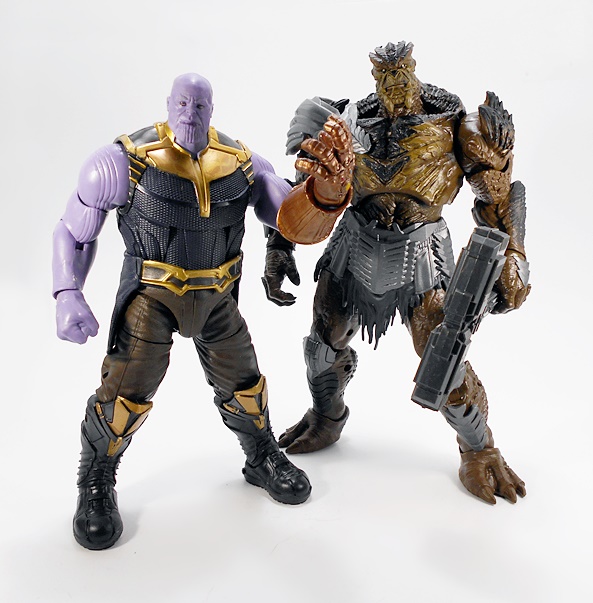 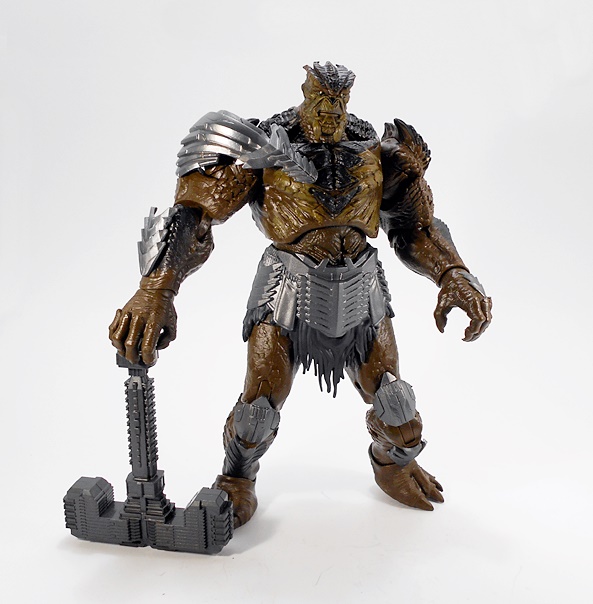 Lame weapon notwithstanding, I absolutely love this figure. It really doesn’t bother me that he strays from the actual on-screen look, especially since the difference is mainly in his costume. He’s big and nasty-looking and he’s definitely going to spend some time fighting The Hulk on my shelf. Pretty soon I’ll be opening up Proxima Midnight and I’m really looking forward to the release of Ebony Maw and Corvus Glaive. I think they’re going to make for one hell of a display!

And that’s a wrap for 2018. I’m not doing any kind of End of Year list this year, mainly because I’ve got a busy couple of weeks with work and also because I don’t want to fall any farther behind in my backlog. At some point in the next month or so, I’ll probably be doing a Marvel Legends week, just to try to get me a little boost, although at this point I would need to do a whole Marvel Legends month just to try to get sort of caught up. Anyway… thanks to everyone who stuck with me for another year and I hope you all have a safe and happy New Year!