It’s the last Marvel Monday of 2018 and I vowed to get through one more wave of Marvel Legends before we flip the calendar to 2019, so I’m going to be doubling up today. This morning I’m opening my final boxed figure in the Cull Obsidian Wave, Malekith, and I’ll be back later to build Cull Obsidian, himself… Let’s go!

Malekith is the third figure from the 2017 SDCC (Now Not-So) Exclusive Ragnarok (the others being Jane Foster Thor and Thor Odinson) to get a subsequent retail wide release. Sure these were all repainted, making those versions still technically exclusive, but that leaves just Ulik and Bor as the only figures in that set not to get a brick-and-mortar treatment. You could argue that those two are the best in the set, but I still haven’t opened mine yet, so off-hand I couldn’t tell ya. It also means I won’t be doing any side-by-side pictures of this Malekith and the SDCC version, but I will be doing some verbal comparisons. 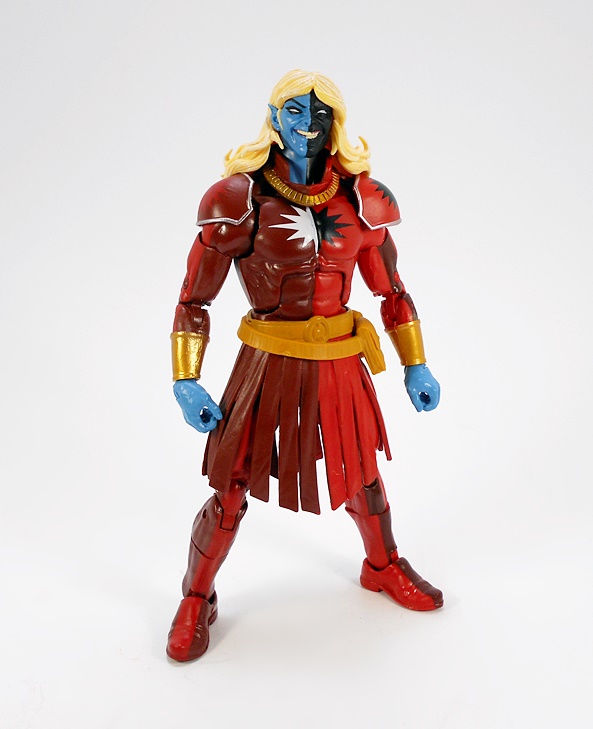 The retail release is so very nearly a straight repaint of the SDCC version, but there is one change and that’s the left hand. The exclusive version had an open hand, this one has a closed accessory holding-hand. Why the change? Maybe it was just so they could point to something other than the paint to distinguish the two figures. I dig it, because now he’s ambidextrous! Although the grip on mine is actually closed, so you’ll need to make do a quick slice with a razor if you want him to hold the sword in the other hand. Malekith makes use of a lot of paintwork to characterize his costume, but there’s some new sculpting attached here as well. The shoulders and collar are cast in one piece of soft plastic, although it looks like three separate pieces from the front. Happily, the flexibility in the shoulder armor means that it won’t inhibit the arm articulation. He also has two belts, One with the skirt attached to it, which feels like it might be glued into place. The other hangs loose on his hips and features some sculpted pouches on his left side. Finally, the forearms are sculpted with his wrist bracers.

As for the deco, well that’s going to be an issue of personal preference. This retail release is definitely brighter and cheerier, but I’m going to go with the Exclusive version as having the more appealing deco. The darker red and the black in place of maroon just makes for a more sinister and striking figure to me. That’s not to say this one is bad, they’re both fine. I dig the gold paint on the bracers and necklace, although I would have liked some additional paint hits to the belts.

The head sculpt is quite spectacular. I love his broad, evil grin, and the black and blue paint on the face looks great, even though they splashed some blue onto his teeth. The hair is sculpted as a separate piece to give the portrait some depth. Early pictures made me think that the hair was going to be more of an orange-yellow tone, but in person it’s very pale and I’m happy with that. Although, I think I still prefer the whiter hair on the exclusive over what we got here. 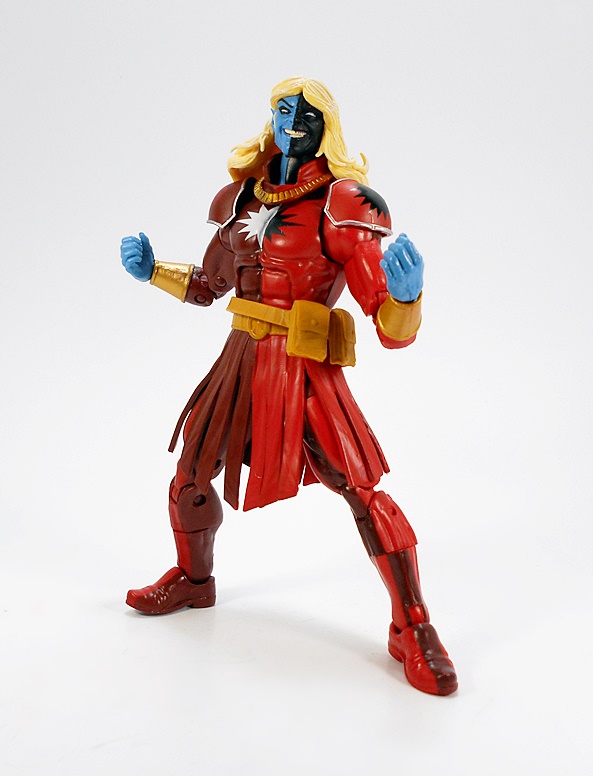 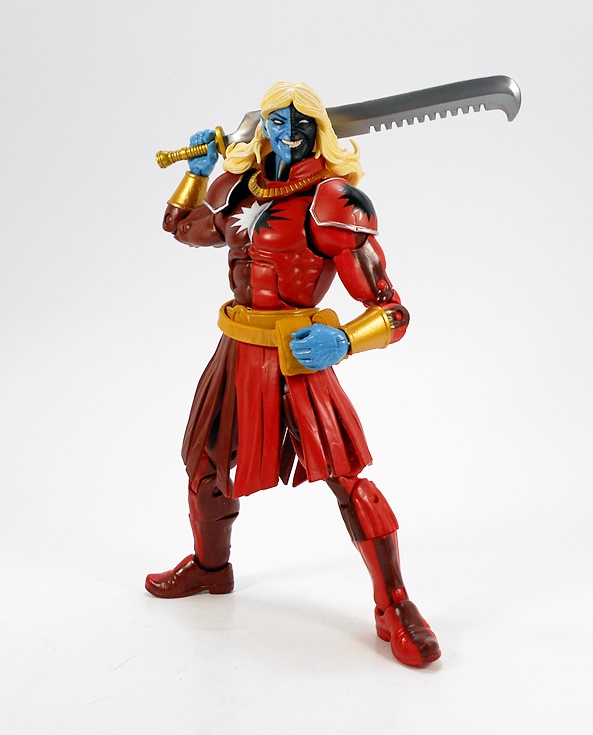 Malekith comes with his sword, which is an absolutely bitchin’ design. The hilt is fairly simple with a ribbed grip, no cross-guard, and a gold finish, but the blade is so distinctive! It narrows at the hilt, then swells out, and ends in an upswept clipped point. It also features a nasty looking serrated back. It’s one vicious looking piece of cutlery! 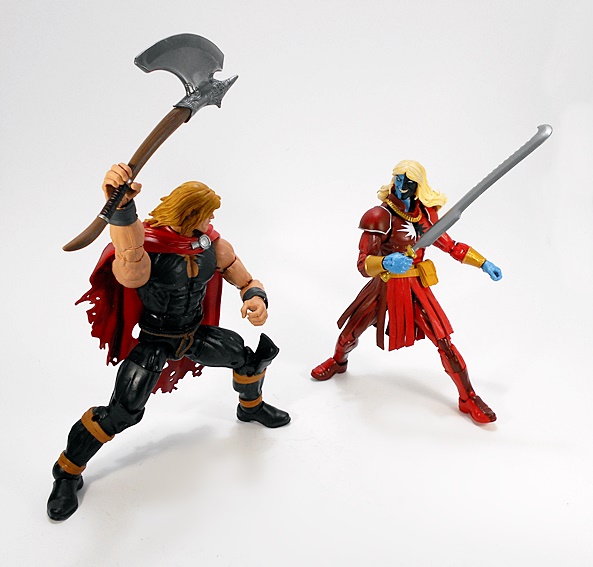 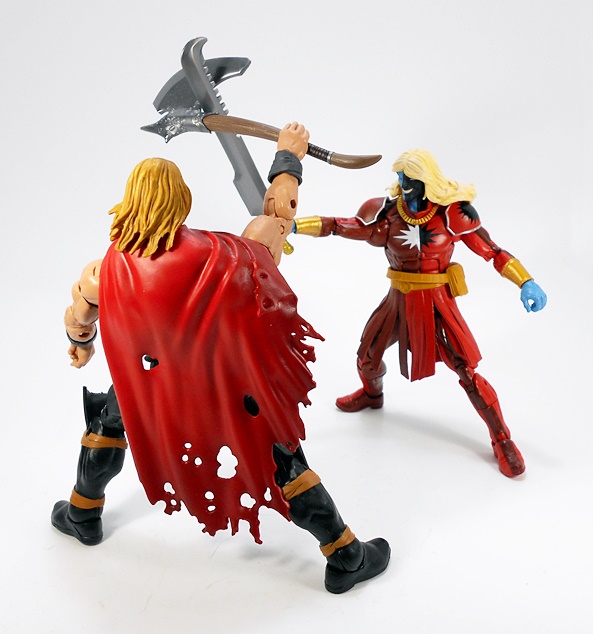 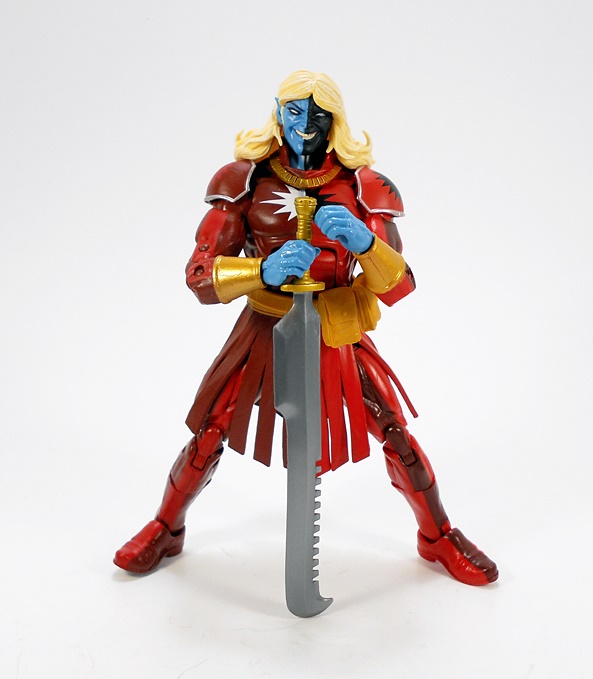 I’m thrilled to finally have the comic version of Malekith represented on my Legends shelf. Hell, he’ll even be represented twice if I ever get around to opening the SDCC set! He may have been a bewilderingly odd choice to include in this wave, but generally speaking, I don’t care how the assortments play out, as long as we get the figures. It’s just a shame that the character was handled so poorly in the MCU, but then the villains have rarely been the MCU’s strong point. Anyway… give me a little time to recoup and I’ll be back later on tonight to check out Cull Obsidian!