Slowly but surely I’m working my way through the first wave of Deluxe figures from the new Siege: War for Cybertron. So far this assortment has delivered on the best Hound figure we’ve had in ages, and a pretty sweet update to the Duocon, Flywheels so at this point, the wave can do no wrong. Can they work the same magic for the classic Class of 84 Autobot Sideswipe? Well if opinion on the social medias is any indication, I think they can!

Here’s another look at the packaging as Hasbro does away with the card and bubble in favor of a collector friendly window box. I love these boxes and the character art looks fantastic. It’s just too bad that I don’t have the space to keep them. Sideswipe comes packaged in his robot mode, but we’re going to jump in to his alt mode first!

Whereas Hound’s felt like a bulked up version of his G1 Jeep mode, Sideswipe’s is more of a futuristic version of his G1 Lamborghini mode, and I dig that a lot. It’s like Siege is taking the underlying characteristics of these alt modes and buffing them. So Hound gets more military and brutish and Sideswipe just gets sexier. Indeed, what we get here feels like a Lamborghini concept car, although I suppose it could still pass for a Cybertronian vehicle. I like the contouring on this car and the intakes behind each side of the driver compartment. The ribbing on the hood is nice, but the sides of the car are pretty f’ugly thanks to some seams and hinges. I also wish the black parts, just above and behind the front wheel wells, were painted red to match the rest of the car. 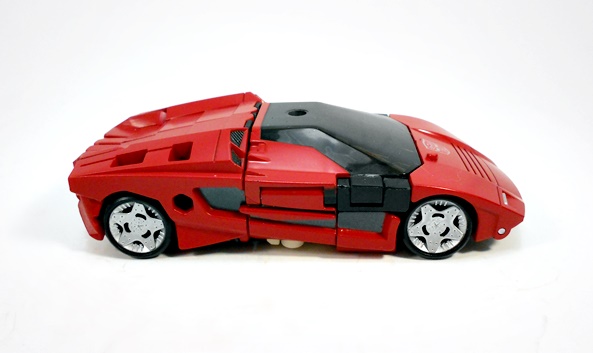 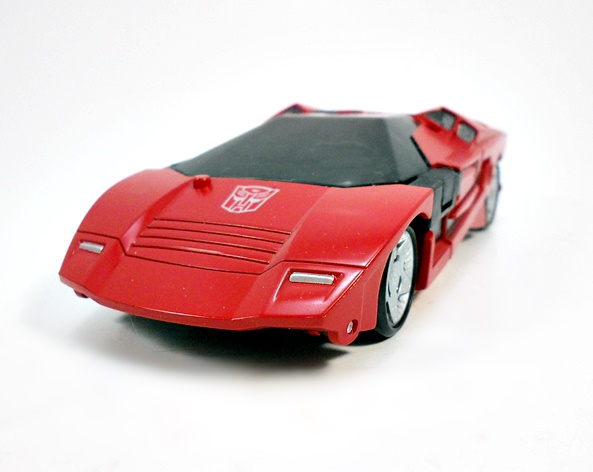 And speaking of paint, the deco is pretty simple and gets by with very little of it. The red plastic looks great with the tinted, smoked windows and you get some silver on the head lamps and the wheels. It’s all capped off with a crisp Autobot emblem stamped right in the middle of the hood. 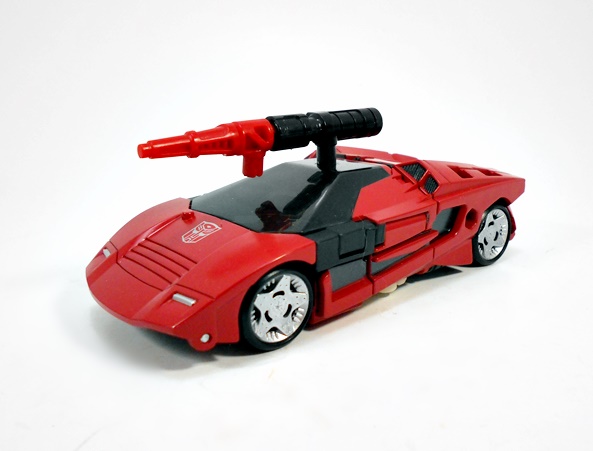 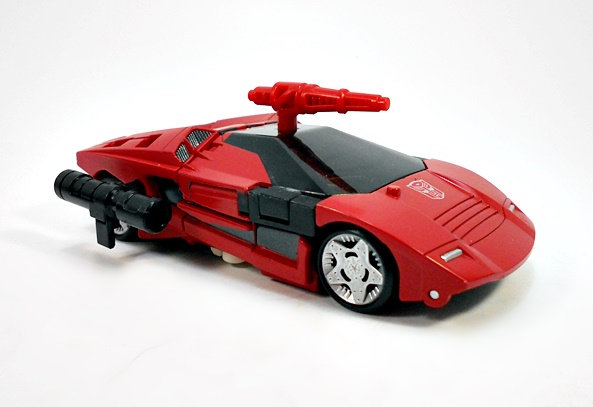 If you like to weaponize your vehicles, there are three peg holes available, one on top and one on each side. Sideswipe’s weapon can also split so you have some additional options. If you’ve picked up some of the Battle Masters, you can also plug them on him.

Transformation here is super simple, and that makes the resulting robot mode all the more amazing. It’s clean, it’s fairly well proportioned, and it’s the spitting image of Sidesweipe’s old G1 robot mode. I particularly love the way his front wheels lock inside his shoulders and the way his legs fill out. But beyond how faithful his is to his roots, he’s also so tight and sturdy. Everything locks together so well that he feels more like a regular action figure than a Transformer.

Even from the back, Sideswipe’s design is super clean. Sure he has a big slab of car canopy for a back, but it’s rare that you get a Transformer that isn’t showing off some ugly bits from behind. As for the deco, it retains that nice red plastic, while adding a fair amount of off-white plastic in the arms, legs, and the frame around his neck. Some paint hits include the silver on his feet and waist, and some dry-brushing on his lower legs that look like wear and tear in the metal. 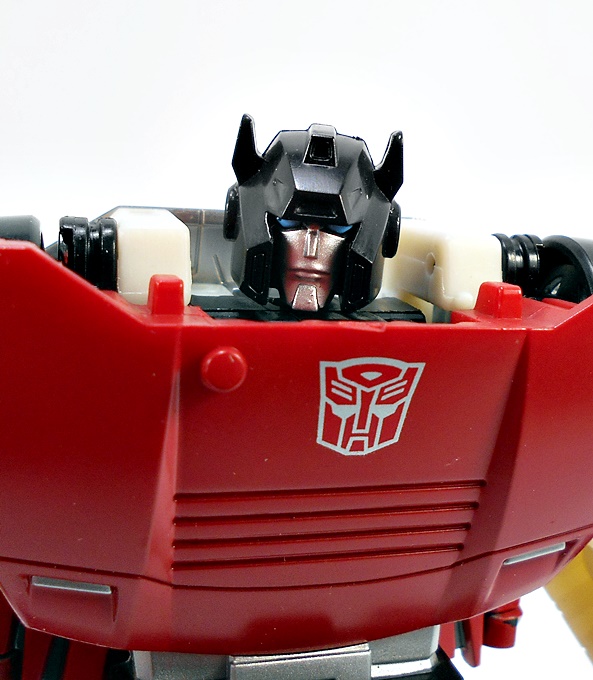 The head sculpt is terrific and also very evocative of the G1 character, complete with horns. If I were to nitpick anything about this figure, I’d say that I wished his head sat a little higher. If you look at him straight on, his chest plate covers a bit of his chin. But that’s only if I’m really looking for stuff to complain about. 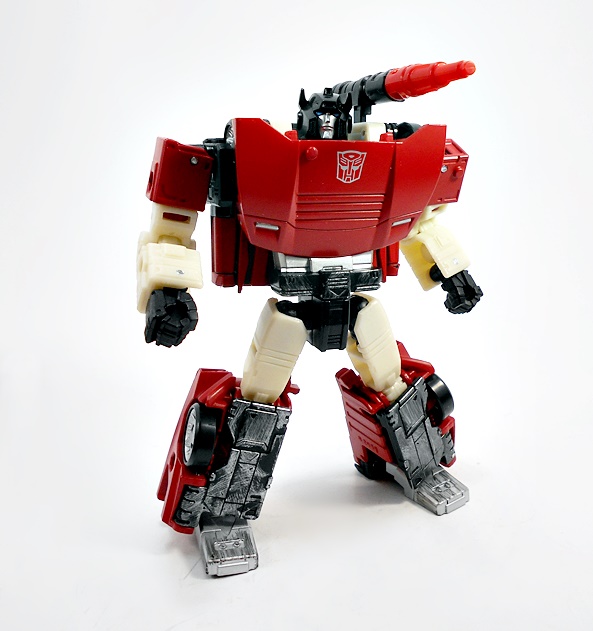 Sideswipe’s weapon can be a rifle to hold in his hands, or it can be attached to his shoulder to simulate the G1 toy’s missile launcher. You can also pull it apart and mix things up a bit. I do kind of wish he had come with a proper rifle so he could have it and his shoulder launcher, but I think Hasbro’s really banking on people buying the smaller Battle Master packs for weapons. 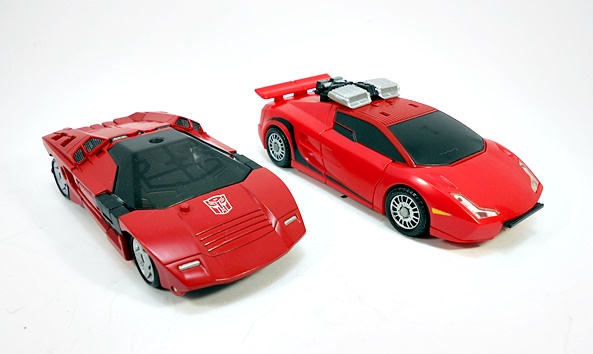 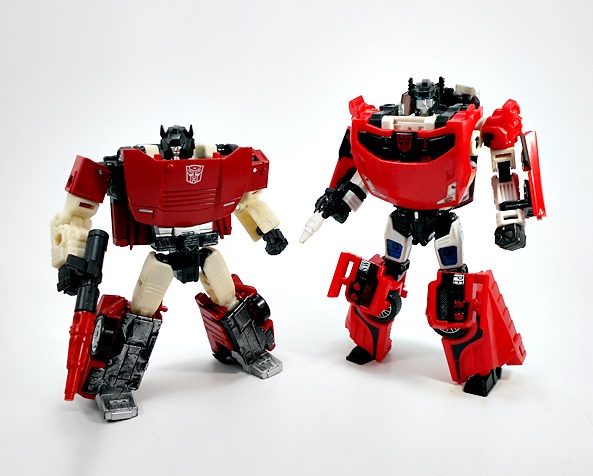 And before wrapping up, here’s a quick comparison of Siege Sideswipe with the old Universe version. Honestly, I think I still prefer the Universe version’s auto mode over this one. It’s just cleaner and shows a lot less seams. As for the robot modes, I’m going to give the nod this new figure. I still love the Universe version, I think it’s a great looking figure with some neat engineering, but there’s something about how simple and elegant Siege Sideswipe that I just love. He’s also more fun to play with.

With three figures down in this Deluxe assortment, I have nothing but high praise for Siege. The figures look great, have some refreshingly simple transformations, and I’m digging the unabashed fanwanks back to the halcyon days of Generation One. Indeed, I would be thrilled if all of the Class of 84 Autobots got the Siege treatment! I’ve got one more Deluxe to look at, in a couple of weeks, and then I’ll start in on the big boys.