Obligations in my personal life are getting a bit crazy at the moment and that will be the case the next month or so. A tiny part of me is tempted to put FFZ on hiatus. Luckily, the other parts of me are reasoning that writing about toys is good therapy, so I’m pressing on with business as usual and opening another figure on this fine Mythic Legions Wednesday. I am, however, taking it easy today and going with a figure that will be pretty simple to cover, because he’s extremely similar to a figure we’ve looked at before! 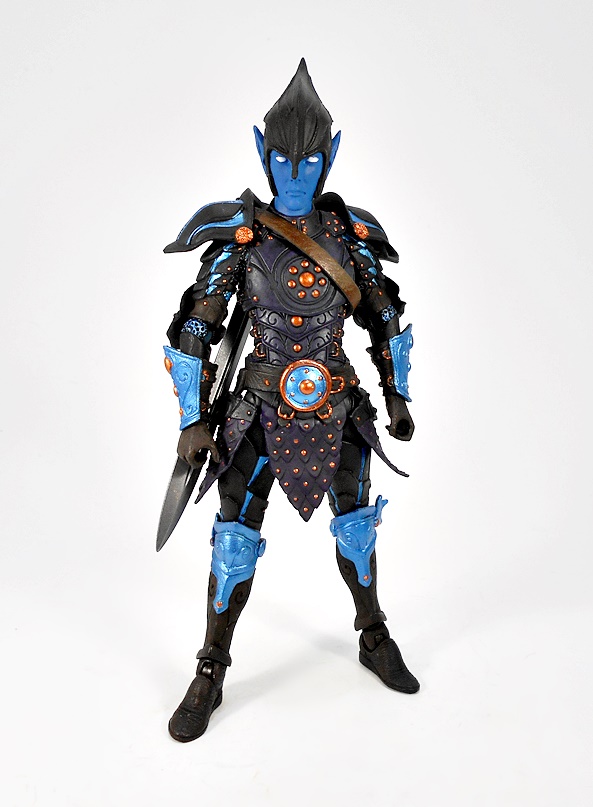 Behold! The Shadow Elf Warrior! We’ve already established that there are many types of Elves in Mythoss and today we’re seeing a new kind! This fellow is kind of a Legion Builder in that he doesn’t have a character specific bio, but he does have some additional paint applications, just maybe not as much as a regular figure. Still, without looking back at my original invoice, I can’t remember if he was one of the budget figures or a regular release. Does he look familiar? He should, because he’s very nearly a straight repaint the Elf Legion Builder. The only different parts are the lower arms and lower legs, which eschew the full plate-mail armor of the previous figure with the lighter wrist bracers and leather-like boots. The rest of the figure is totally the same, even the optional shoulder armor pieces. 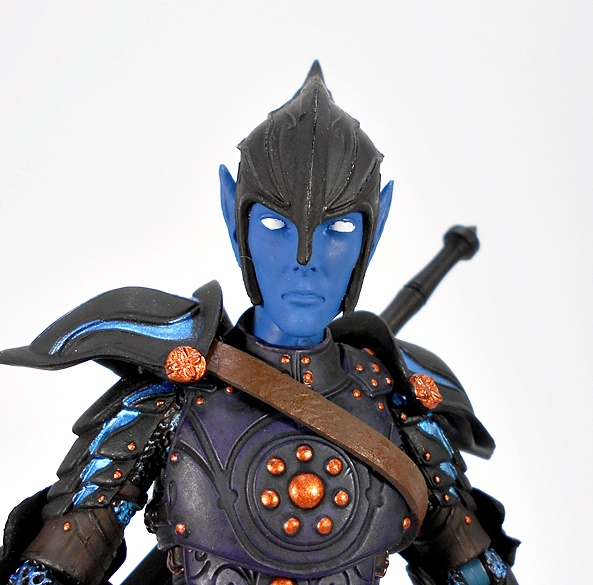 And yup, that even includes the head sculpt. Well, two of them to be precise. The Shadow Elf Warrior includes an open faced-helmet, showing off his inky blue skin, pupil-less eyes and long pointed ears. We’ve seen this face before with both caucasian and dark brown skin, and now we’re adding blue into the mix. I still love the contours of the helmet, which give it an organic, if not alien flavor. 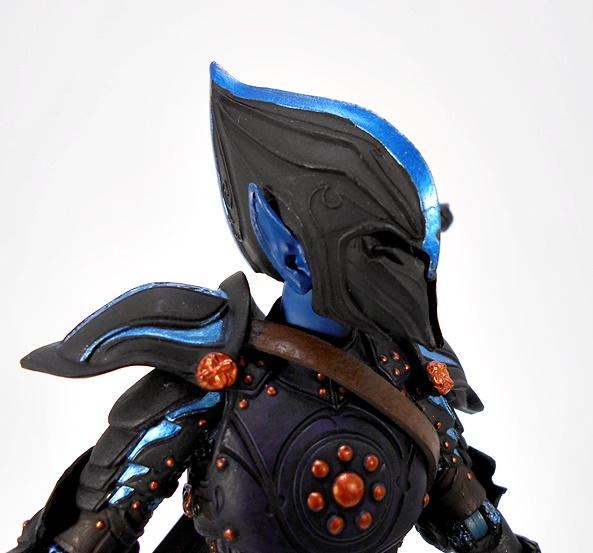 The other head is the same helmet with a fully enclosed face plate that leaves just the ears exposed. This takes the same great design and just ups the cool factor by covering the face and making the portrait all the more mysterious. This head also adds a metallic blue stripe to the helmet, which I like, but it discounts the ability to make this the same character head with just the mask added. I also have to report that this particular head features the biggest paint flub I’ve had on any of my Mythic Legions figures. There’s a bit of blue chipped off the stripe and some blue splash on the mask’s left cheek. It’s disappointing, but this line still has a tremendous track record when it comes to nearly immaculate paintwork. 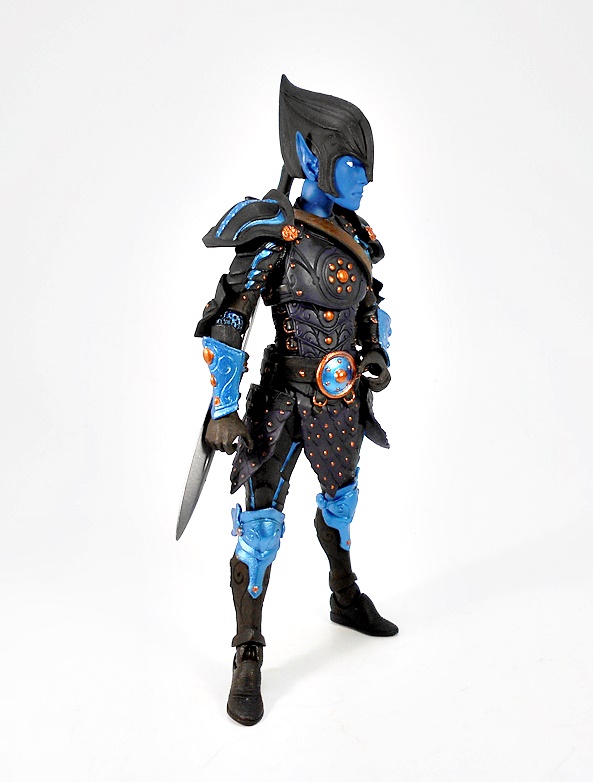 As the name suggests, the base coloring here is a bit subdued, but there’s plenty of flourishes to brighten things up. Much of the armor on the arms and legs is a deep brown with the cuirass and waist armor featuring a purple wash. t works well to make the armor look more like leather than plate and also contrasts nicely with the electric blue metallic paint used for the bracers and knee armor, which are clearly supposed to be plate. Similar blue is used for some of the accents on the upper legs, upper arms, exposed chain-mail, and pauldrons. Copper paint is meticulously applied to all the tiny sculpted rivets, as well as the buckles on each of the individual straps on the armor. The blue and copper mingle beautifully for the disc-shaped belt buckle, and all in all, this is another fine example of some rather unorthodox color choices turning out a striking figure. 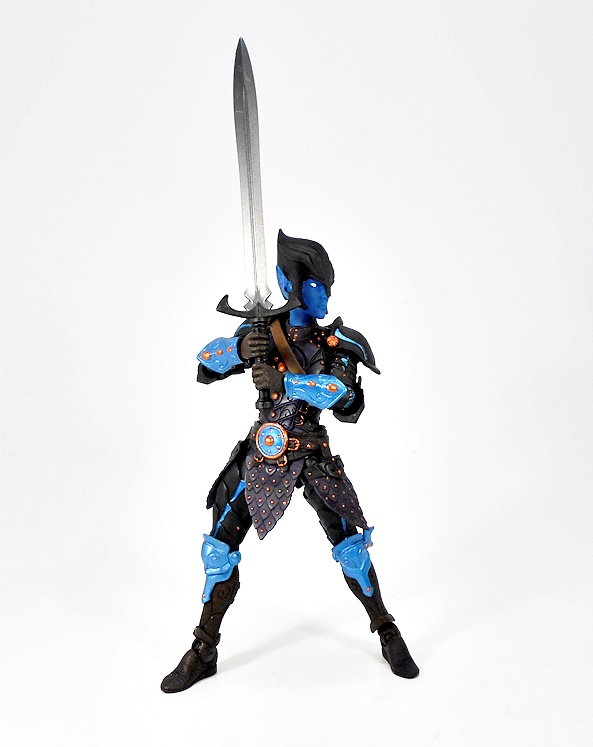 This Elven Shadow Warrior doesn’t exactly come packed with a ton of accessories, although the extra head should count, I suppose. With that being said, he does come with the ubiquitous two-handed sword that we see over and over (and over!) again, and I’m still fine with that. Although, as much as I like it, I am starting to think that T4H maybe should have tossed one more two-handed sword design to offset the fatigue over this one being included so many times. I mean, if for some reason you don’t like this design, then you’re pretty much screwed! Personally, I think it works well with this figure, especially with the dark painted hilt, and as you can see, I like him wearing it with the belt over his shoulder and the sword slung across his back. 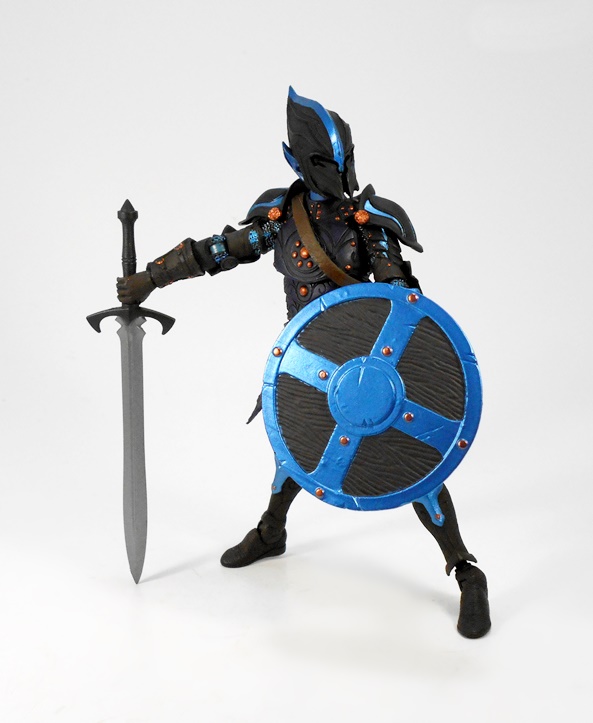 A shield is included, and we’ve seen this one before as well, probably most recently with the Myria Goldenbranch. I like this shield, and I don’t have a whole lot of them, so I certainly don’t mind getting it again, although I do wonder why T4H didn’t choose to include the Elf shield that they designed with more of the Elves. It’s a beautiful piece, and technically we haven’t even seen it here yet, because I haven’t yet opened the figure it comes with. I think this particular shield works well with the woodland Elves, but this Shadow Elf could have used something more exotic. 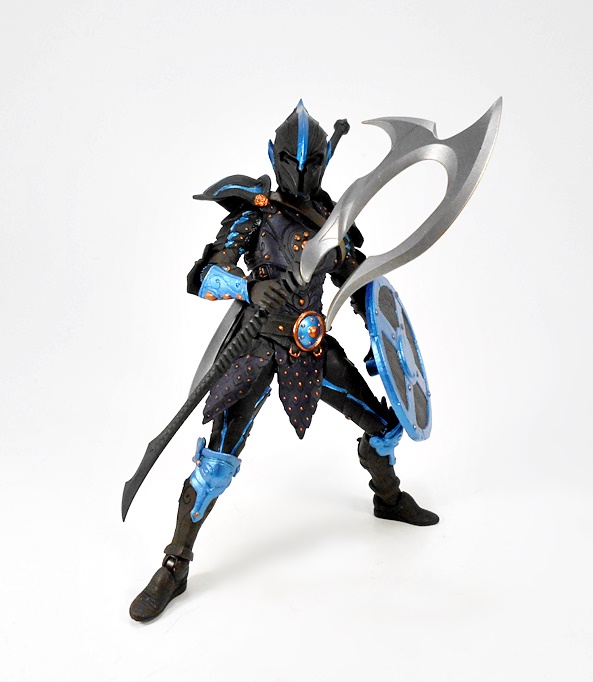 I’ve saved the best accessory for last, and that’s this large Elf axe. I don’t believe we’ve come across this one yet, and it is indeed a sexy piece of cutlery. Everything about is exotic, from the turned ebony handle to the sweeping curves of the silver blade. Even the butt of the shaft ends in a sharp bladed point. It’s large enough to be wielded with two hands, yet slender enough for one. I love this weapon! 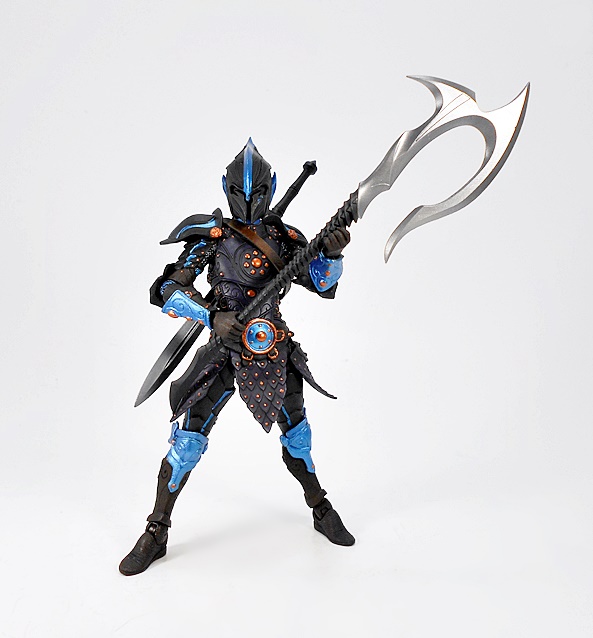 Being more than a dozen figures into the Advent of Decay series, it’s expected to be encountering figures with lots of re-used parts. That is, after all, the very nature of this line. So, I’m fine with a figure like the Shadow Elf Warrior being more or less a repaint of a past figure, with just a few parts swapped. The new deco looks amazing and I’m continually impressed at how by just changing up the paint, T4H are able to transform parts from heavy full-plate armor to something that more resembles leather. I can happily stand this figure beside the Elf Legion Builder without the similar sculpts slapping me in the face. The axe is a great addition to the Elf arsenal, but I would have preferred the Elf shield be included instead of the round one we got. Either way, he’s another great figure to add to the collection!