Last week, I cheated on my Marvel Legends random draw, so I’m being good this week. I closed my eyes, rooted around the stack for a while and I came back with Spider-Man Noir from the Lizard Wave! This pleases me, because it’s been so long since I bought him, I had almost forgotten this figure existed! And while Spider-Verse figures don’t need to further justify their existence to me, this one has become a little more topical since we’ve seen the character portrayed in Into The Spider-Verse and even had a similar suit revealed for Spider-Man: Far From Home!

And just in case you needed any more indication of how far behind I am on my Legends, I reviewed my first figure in this wave, Gwenpool all the way back in April of last year. Spider-Punk followed in July, and here I am opening what is only my third figure from this wave. Needless to say all the amazing Legends reveals at Toy Fair this month had me weeping tears of joy and fear at the same time. I think I had convinced myself that the poor financial reportings would maybe cause Hasbro to pull back on the reigns a bit and slow down on production. Nope, seems like that’s not happening. And while it would have been nice to get a little breathing room to get caught up, I’m happy to see Legends is still a sure thing in their eyes. 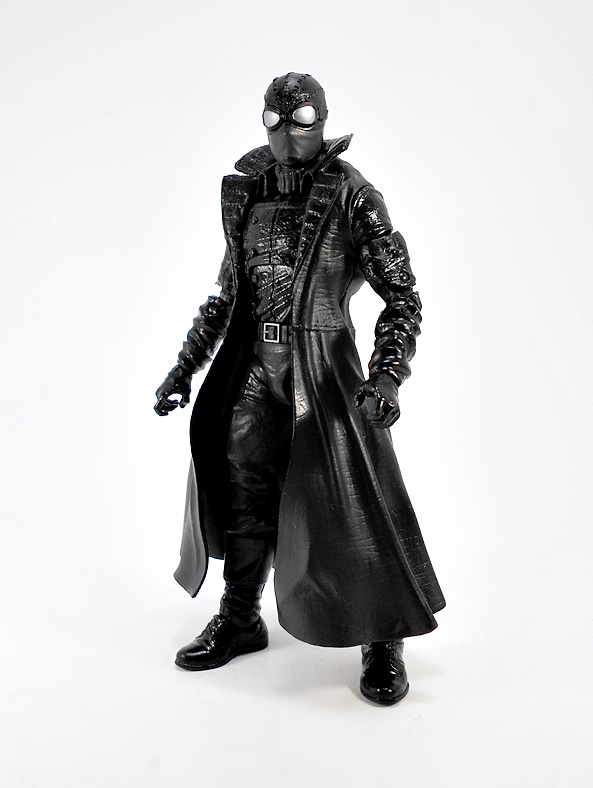 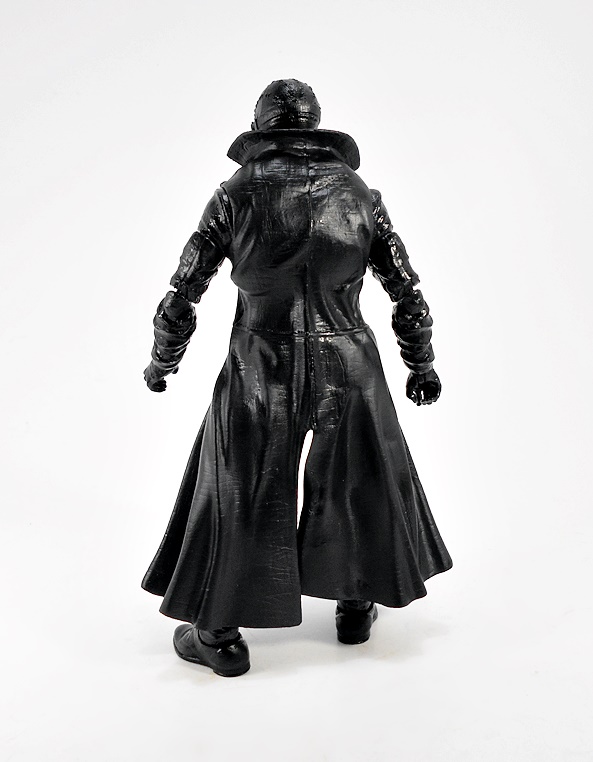 And here he is! Another one of many gifts from Spider-Verse, a comic event that was not only really good, but practically made to sell action figures! Lots and lots and lots of action figures! I know, he had his own series first, but my first exposure to him was in Spider-Verse. As his name suggests, Spider-Man Noir is a darker version (both literally and figuratively) of Peter Parker, hailing from Earth-90214 and the pulpy squalor of The Great Depression. 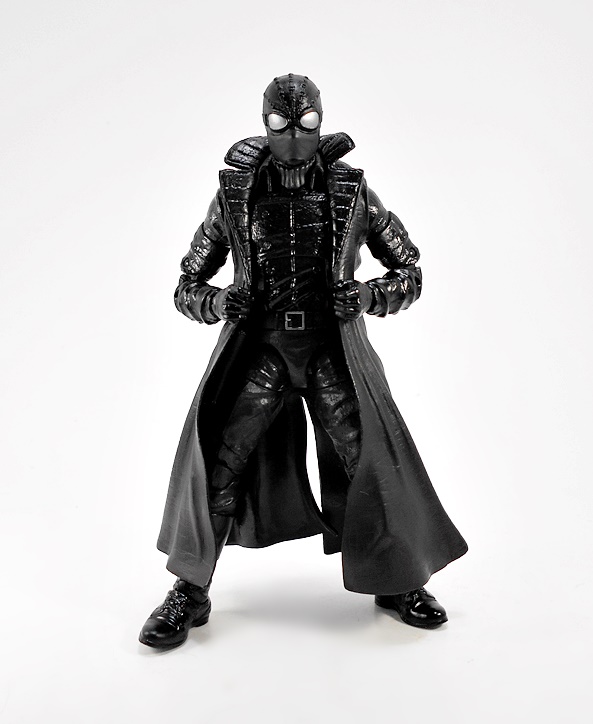 Straightaway, Spidey makes use of pretty obviously recycled parts. The easiest mark is the jacket we’ve seen on figures like Nick Fury and Fantomex. Talk about getting a lot of years out of a garment! I didn’t think I was going to dig it here, but to be honest, I think it works out just fine and looks really good on the figure. What’s more the sculpted sleeves here work a lot better with it then the ones on the Fury figure. The other big call out for me was the Ghost Rider torso, which again is a good fit for the character design. As for coloring, well you obviously get a lot of black, along with some gray that’s so dark it almost might as well be black. Nonetheless, the change up between matte and glossy black go a long way to keep things interesting, and you get a little flash of silver paint on the belt buckle! 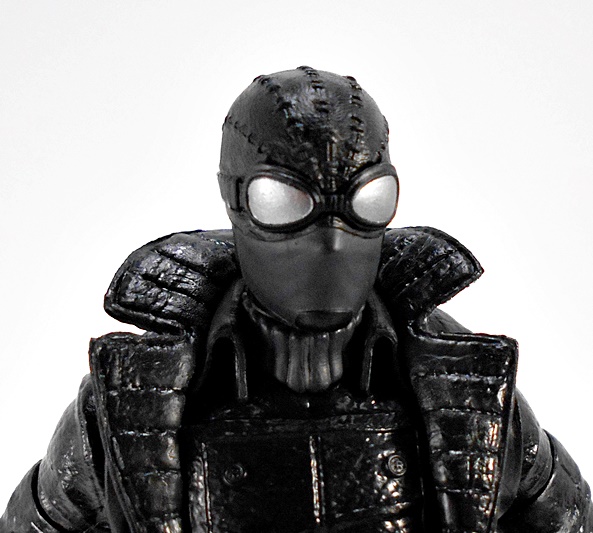 The head sculpt looks fantastic. I find the combination of aviator goggles, gimp mask, and featureless mouth all quite terrifying, and Hasbro did a beautiful job with it here. I especially dig the sculpted detail on the top of the hood and the subtle facial details that can be made out under the covering for the lower face. New sculpting also includes the turtleneck-style collar. 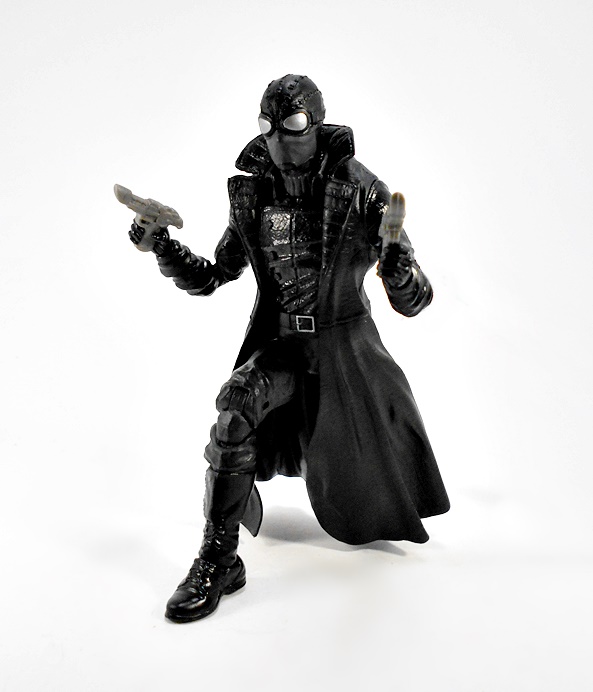 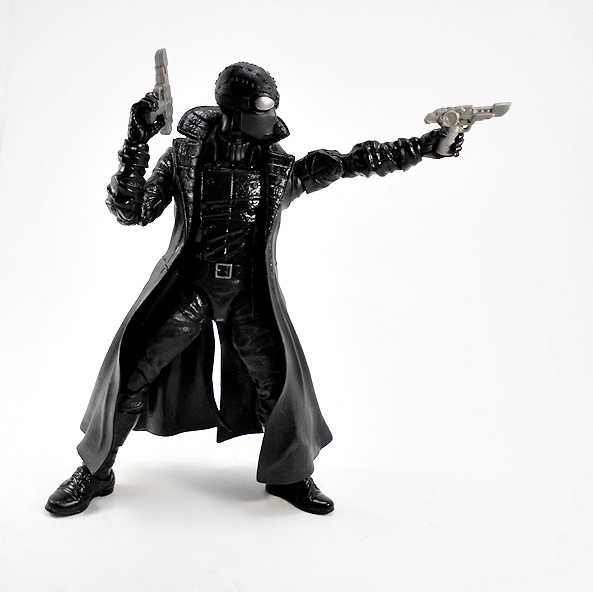 Accessories include twin pistols, one of which can be stored in the holster on his right hip. Why no left holster for the other gun? I don’t know, but since I can’t remember whether that was from the character design, I won’t come down on Hasbro too hard for it. These are pretty cool and distinctive sculpts and they fit well in his hands, although the trigger finger makes it easier to just have Spidey practicing proper trigger discipline.

No matter what Earth you’re on, most Parkers are agile little bugs and this figure reflects that pretty well. There are no surprises, so I won’t run down all the points, but as always the double hinges in the elbows and knees go a long way to making him a fun figure to play with. And this was another area where the jacket surprised me. I assumed it was going to put a real hamper on the poseability, but it really doesn’t. I think those were problems inherent to the Fury figure, especially in the arms. 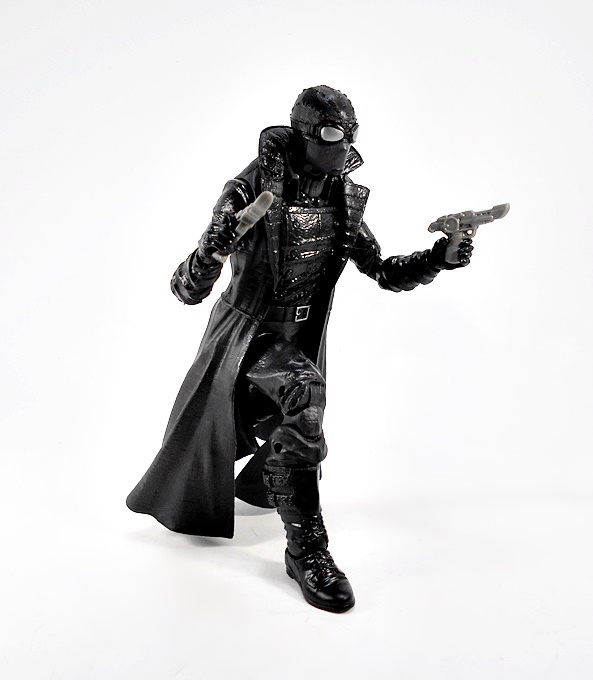 It should come as no surprise that I really dig this figure. He’s a great representation of the character with some sensible parts recycling. And while he may not offer all the usual bright and snappy colors we’re used to seeing in a lot of our Marvel characters, that fact alone makes him stand out on the shelf. I’ve been looking forward to this Legends version ever since I got the 4-inch version back in 2016 and this one just blows that figure out of the way on every level. He also puts me one step closer to having to expand my Spider-Verse shelf.