I probably should be looking at something other than a Transformer this week, since I’m getting way behind on NECA and Star Wars stuff, but I got caught up purchasing all the Transformers: Siege releases last week and because I’m digging this line so much, I was really jonesing to open another. Soundwave remains one of my favorite characters, and is always a good choice, so let’s go with him. 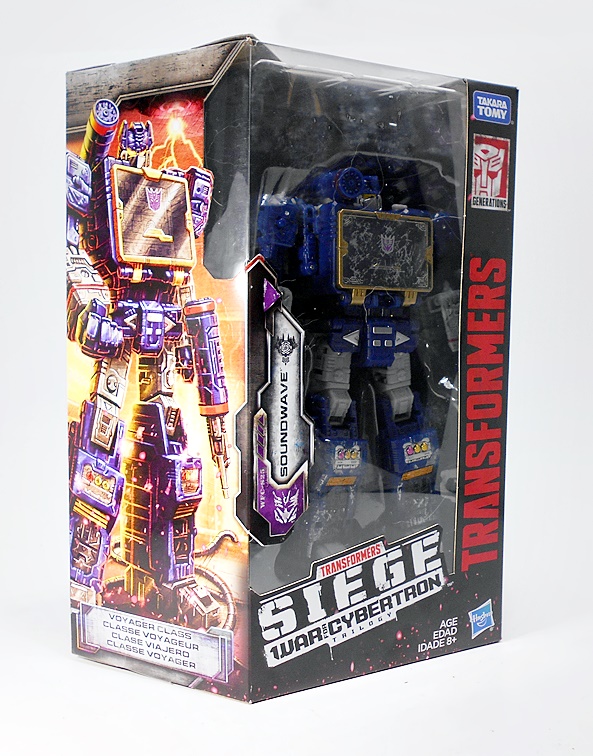 The Decepticons are really owning the Voyager Class in this line, with Megatron, Soundwave, and Starscream up against lonely Optimus Prime. Then again, the Autobots are all but monopolizing the Deluxes, and I guess that works for me. I almost always judge a new Transformers line by how well they do the Decepticon High Command. They did a nice job with Megatron, so needless to say, I am hoping for good things out of Soundwave. Let’s start with his alt mode. For several lines now (Titans Return being the exception), Soundwave has had this weird thing going on, where Hasbro tries to salvage his tape-cassette gimmick while not having him actually turn into a tape deck. I kind of get that. Deploying mini Decepticon warriors is a huge part of what makes him so unique and before the whole retro-80’s craze, a lot of kids probably couldn’t identify with a cassette player as a toy. And so this time around, Hasbro gave Soundwave the alt mode of a Cybertronian space cruiser. 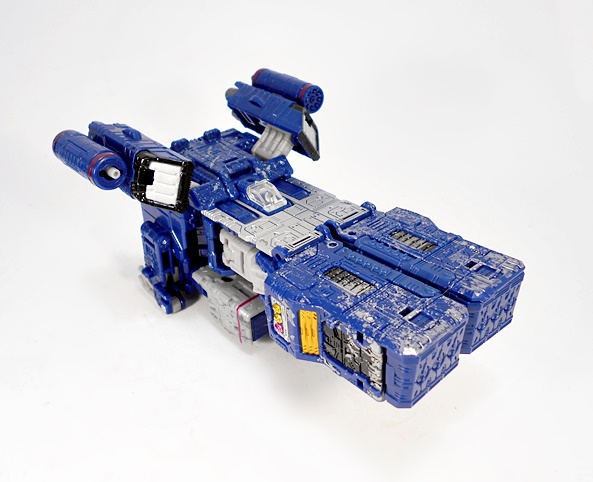 And as far as bullshit, made-up alt modes go, I honestly don’t think this one is all that bad. And yes, I realize I’m in the minority here, because I’ve seen plenty of shade thrown at this toy for this very reason. Truth be told, I kind of dig this chunky design. It kind of reminds me of some of the old Wing Commander designs, and that ain’t a bad thing. It also actually takes some engineering to get between robot mode and this alt mode. Indeed, the only thing about this mode that I don’t like is the giant tape door on the back. 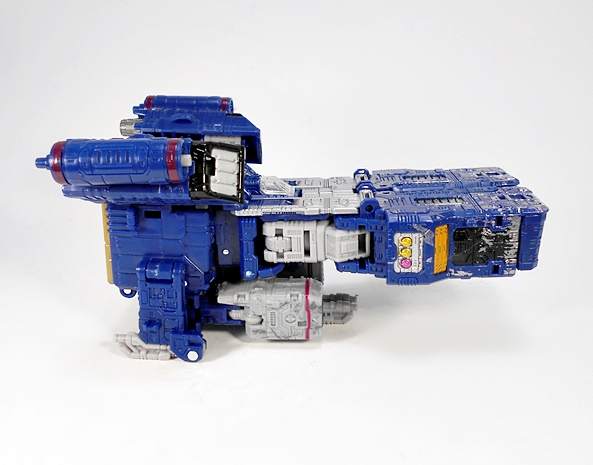 The coloring and finish are both great. You get a pretty typical Soundwave-y deco with a lot of deep blue and gray. The weathering is nicely done and I think it contributes well to making this look like a well-used spaceship. Additional paint hits like the red trim on the weapon pods and the silver, yellow, and red panels add to the visual appeal. And that’s really all I have to say about this thing. I’m surprised at how much I dig it, but I’m really here for the robot mode, so let’s jump right into that.

In his bot mode, Soundwave emits waves of pure G1 goodness. I absolutely adore this figure. I mean, nothing is ever going to live up to the Masterpiece version, but for a retail release, this is just so damn good. All the tape deck features are here, for no reason at all, like the buttons on his pelvis and the giant tape door in his chest. He even has his battery shoulder cannon. Does any of this make sense? Nope. Do I care. Also, nope. But besides being very traditional looking, Soundwave is also distinctively Siege. Hasbro has taken the basic G1 Soundwave design and dipped it into the hyper-detailed look of Siege, with a crazy number of panel lines and other little details pressed into the sculpt, coupled with the weathered paintwork and the scratches all over the tape door. He looks fantastic.

Soundwave looks pretty damn good from the back as well. His legs are filled out, and with the exception of the backpack, there’s nothing terribly out of place here. And while that backpack isn’t really a traditional Soundwave feature, I think it looks great. Plus, if you fold open the backpack you can see that Hasbro still sculpted in a reference to the belt clip that was on the original toy. Pretty cool! There’s some kibble under the forearms, but it’s not too obtrusive, and you can even fold them out as retractable blasters.

The rest of the deco matches what we saw in the spaceship mode, so there aren’t really any surprises there. Nice touches include the colored panels just below his knees, and the thin red stripes around his wrists. The pelvic buttons are painted silver, and his tape door features a gold border. I’ve already mentioned the abrasions painted onto the tape door, and while I wasn’t sure how I would feel about those when I got the figure in hand, I can’t deny they’re well done, as is the weathering on the lower legs. Granted, if you’re looking for clean bots, these figures aren’t for you, but I have really grown to love the battle-worn flavor of this line.

I have no complaints about the head sculpt. The detail here is really nice, especially the recessed vents on the lower half of his “helmet.” It’s all very sharp for a head this small. Some people are apt to complain about the choice to go with the toy accurate yellow visor. Me? I prefer the yellow visor, but it wouldn’t have been a deal-breaker if they had gone with red. Either way, just look at that glorious light-piping. The visor catches the light easily and really brings the portrait to life. 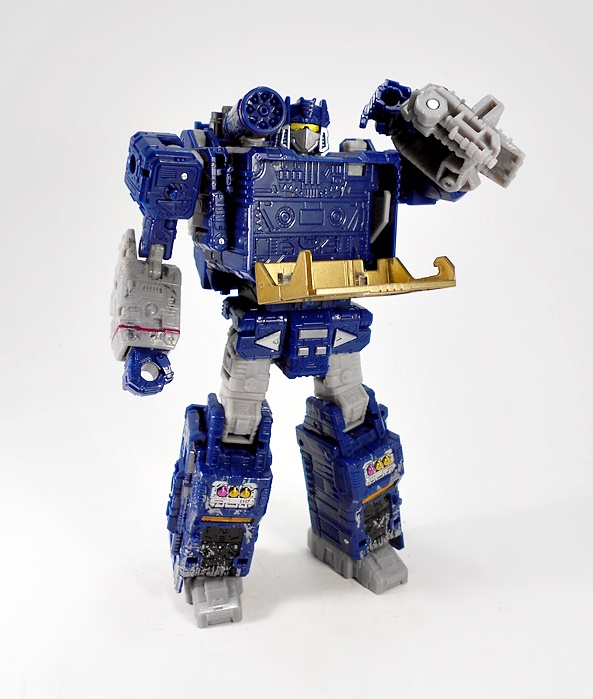 Not only does Soundwave’s tape door spring open at the push of a button, but they also sculpted a finger on his right hand especially to push the button. Wonderful! He doesn’t come with any tapes, but Hasbro has since released Laserbeak and Ravage as Micromasters, which are compatible. I was hoping to squeeze them into today’s review, but I went a little long, so I’ll hopefully be able to circle back to them next week if time permits. 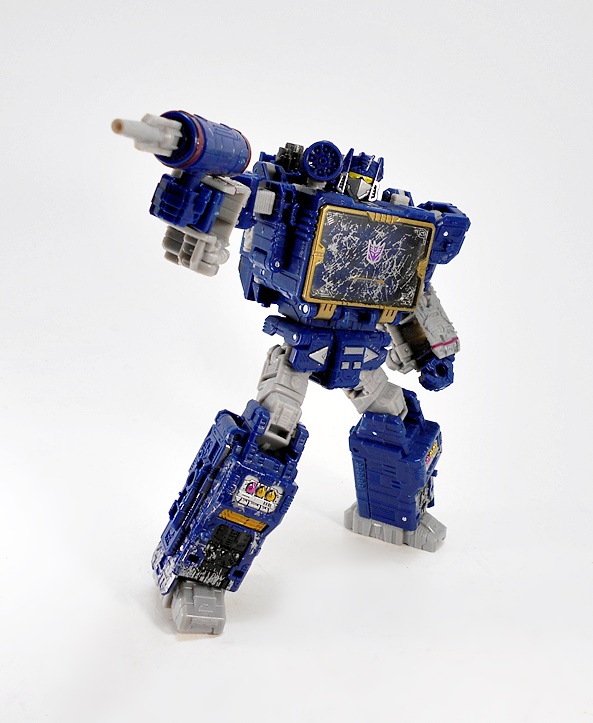 He does, however come with two weapons. Well, three if you count the removable shoulder cannon. The first handgun is his other battery rifle, which is a pitch-perfect match for the original G1 weapon. The beam emitter even retracts into the battery portion, and as we saw, it’s used for the spaceship mode.

The other weapon is a simple folding gun. It can be used to turn both of Soundwave’s battery weapons into one long gun. Otherwise, it’s nothing special and doesn’t really feel like it belongs to him, so I’ll likely be giving it away to another lucky bot. 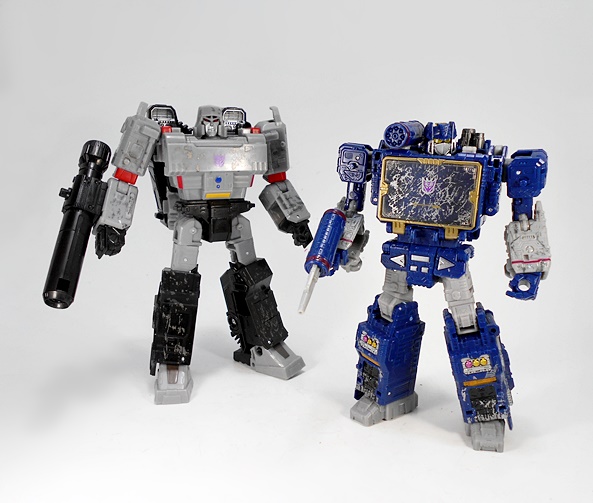 I passed on the Titan Returns Leader Class Soundwave, because it was just way too similar to Blaster, so this is the first regular retail release of Soundwave in a while that I can say I really love. I get it, some people are not going to like this alt mode, but I was surprised at how little it bothered me. And once I get those Micromaster tapes opened up next week, Soundwave will really feel complete!