Last week, I looked at Mysterio, a figure from the Lizard Wave that cost me about double retail to pick up. Today, I’m opening the second ball-buster from this wave that I had to pay double for and it’s Lasher. Both of these were required to build Lizard, but the main difference is that I actually wanted Mysterio in my collection, so that one didn’t hurt quite so bad. Lasher? Mmm… not so much. I’m going to go through this guy quick, because I’ve got a big review to write for later in the week.

I’ve said before that I’m not a huge fan of the extended family of Symbiotes. And that being the case, Lasher here is a real reach. I found the whole Life Foundation plot to be pretty contrived and silly, but I realize that I’m in the minority when it comes to the Symbiotes. From what I understand they tend to sell comics, so it’s only natural that Marvel will drum up whatever they can to get move of them in there. I’ll bet they sell action figures too, which is why we’ve been seeing a lot of these guys showing up in Legends lately. 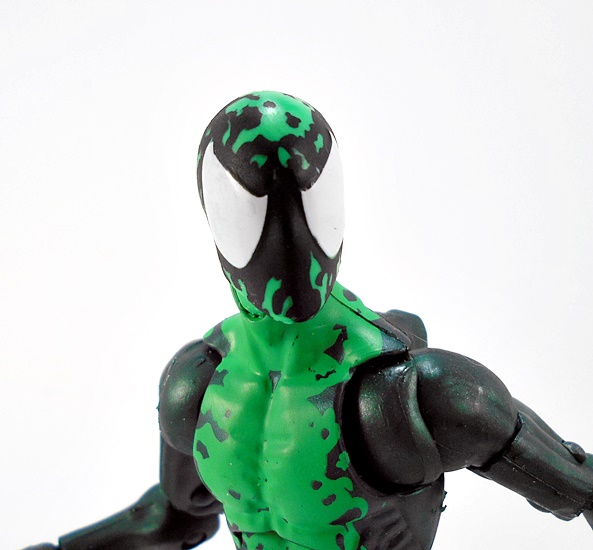 Lasher uses one of the Spider-Man bodies, which includes those lateral shoulder crunches, which are always a nice surprise. New sculpting comes in the form of the creature-like hands and feet, which are par for the course when it comes to the Symbiote figures. The body itself is matte black with a slight metallic green wash and you get green splotchy marks on his torso and neck. The head is classic big-eyed Spider-Man with more of the splotches. There’s nothing particularly striking about this figure to me, but it surely gets the job done. From the back you can see four different shaped sockets for his tendrils. These should be readily familiar to anyone who has picked up Venom or other Symbiote figures.

The tendrils go a long way to make Lasher more interesting, but each one is designed to go in a specific slot in his back, so there isn’t a lot of room to mix-up display options. I think ball joints would have been a much better way to go here, as they would have allowed articulation and a choice on where you want to plug in each of the tendrils. The upper ones are designed to curl over his shoulders and the lower ones hang down and curl forward a bit. I do dig the coloring on these, as the metallic green is a lot more pronounced. It’s a shame the whole figure didn’t have this kind of finish. 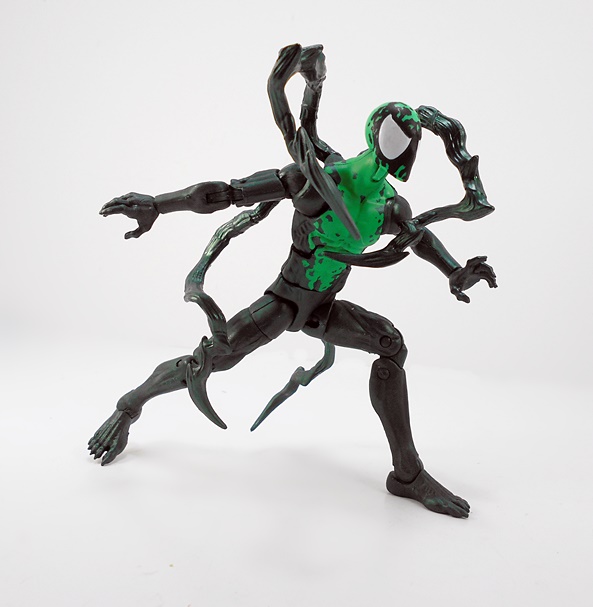 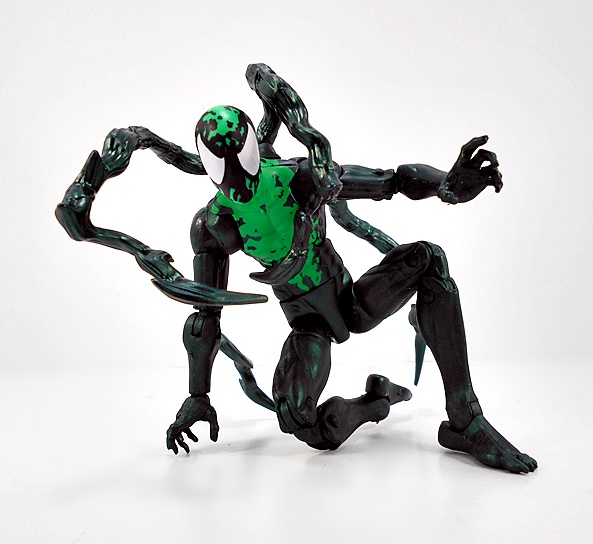 The articulation here shouldn’t be a surprise, especially since this body has been seen before. The legs have rotating hinges at the hips, swivels in the thighs, double-hinges in the knees, and the ankles have both hinges and lateral rockers. The arms feature that extra crunch in the shoulders, along with the usual rotating hinges, there are swivels in the biceps, double-hinges in the elbows, and the wrists are rotating hinges. There’s a swivel in the waist, an ab-crunch hinge in the torso, and the neck is ball jointed and hinged. As mentioned earlier, there’s no real articulation in the tendrils, and they can get in the way of posing. You just kind of have to work with them.

And that’s all I have to say about this guy. He’s not a bad figure if you’re into this sort of thing, but for me a lot of these Symbiotes just blur together. Remember that wave that was all Symbiotes except for Typhoid Mary? Well, there’s a reason I skipped that wave except for Mary. And that was the first wave of Marvel Legends that I sat out since it made it’s triumphant return.  Even at $20, Lasher would have been an easy pass, but toss in the Lizard head and he was worth double that. Next Marvel Monday, I’ll open the last figure in this wave, Spider-Woman, and finally take a look at the Lizard Build-A-Figure.