It’s another week of tight schedules and limited time, so much so that I wasn’t even sure I was going to make it here today. But here I am, and while I was supposed to be finishing off the Lizard Wave today, I had to bump that to next week so I will have time to look at both Spider-Woman and the Lizard BAF. Conveniently, another one of the MCU two-packs hit my porch this past week and so I’m going to just nudge it to the head of the line for this week’s Marvel Monday! Let’s check out some figures from Ant-Man and The Wasp! 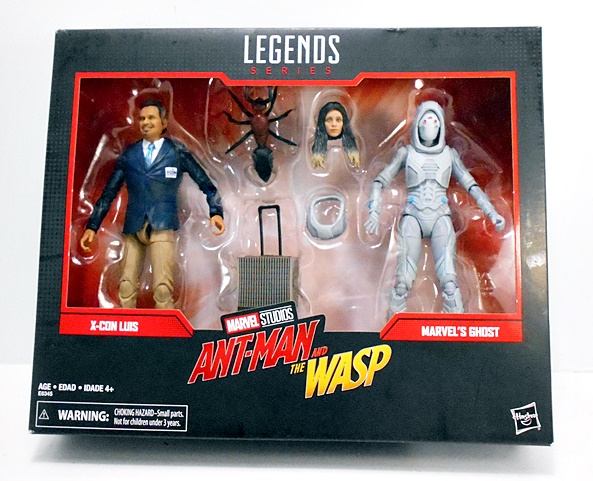 These MCU multi-packs are like an extension of those First Ten Years releases where Hasbro realized that they left a whole lot of money on the table by not milking the movies for every figure they could make. Today’s set is a great example of the two extremes which these releases can take. On the one hand, Ghost was conspicuously absent from the wave that contained Ant-Man and Wasp from this flick and I think that needed to be addressed. On the other hand, we have Luis. Sure, he was a major character in the film, but did we need a figure of him? Only you can answer that question for yourself. Let’s start with Luis. 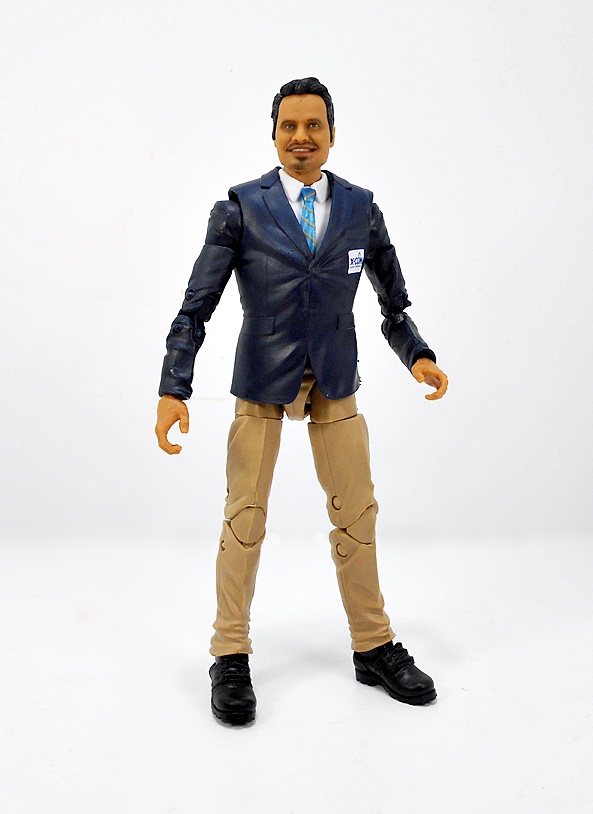 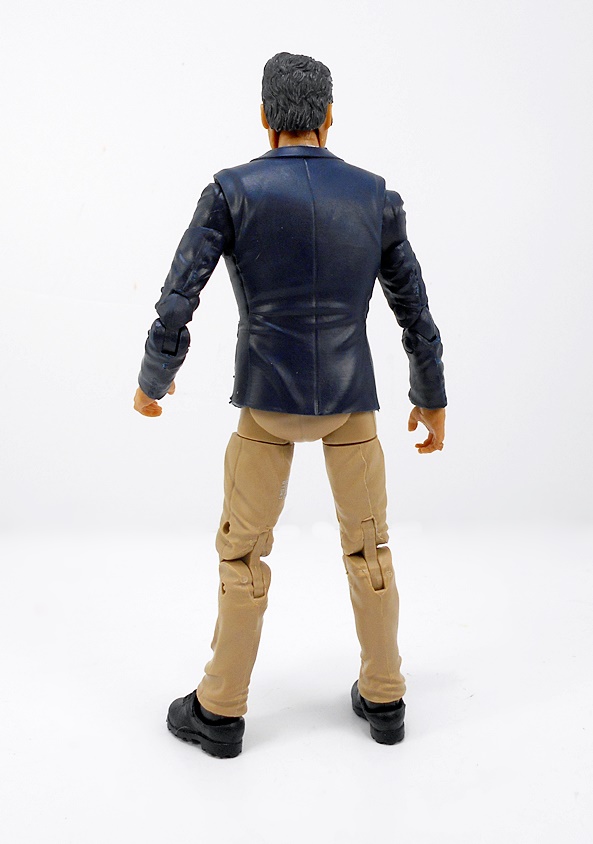 Yup, if there was ever a sign of just how deep Hasbro is digging on this line, here’s Luis in his X-Con jacket! And I have to wonder how I’ve seen this movie so many times without realizing the name of their security business was X-Con. Anyway, this figure is about as basic as you can get with our man Luis donning a pair of khaki pants and a jacket, which is sculpted as a vest in soft plastic, and worn over the torso with the arms sculpted as sleeves. Under the jacket there’s a collared white shirt and tie, which I presume has been recycled from previous business-attire figures. The metallic blue paint on the tie looks sharp, and I love that the tie itself is a separately sculpted piece. There’s really not a lot else for me to say here, other than they printed the X-Con badge on the jacket and he has a ring sculpted on his finger, both of which are great little touch. You just have to imagine that paroled security man is going to be on every kid’s Christmas list this year! 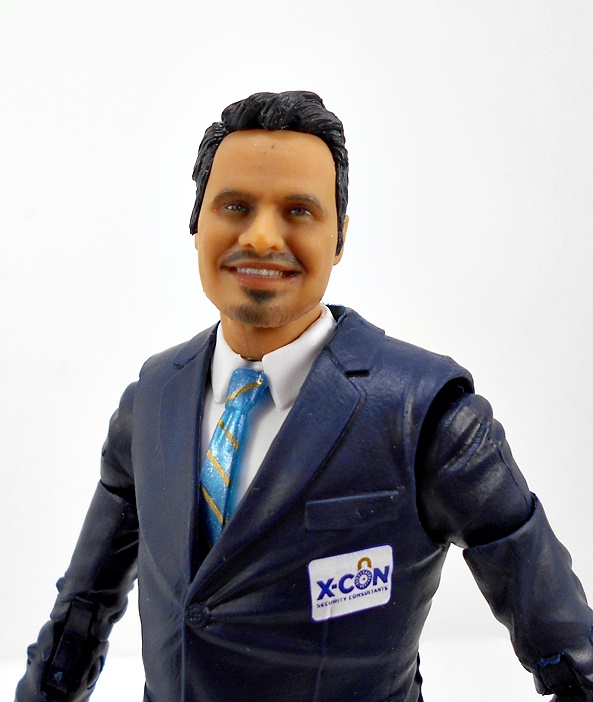 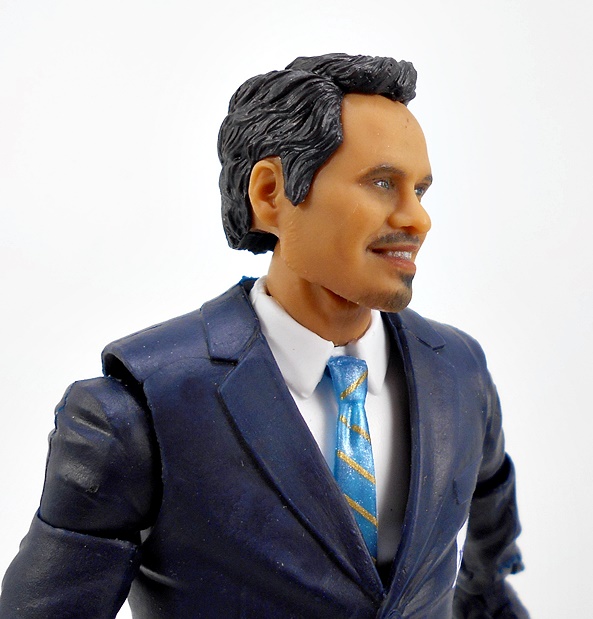 The head sculpt is a fantastic likeness for Michael Pena, complete with the smarmy grin he wore for most of the flick. As always, the halftone printing on the face looks fantastic, especially the facial hair, and his coif is sculpted separately from the head. This one is easily among my top favorite MCU portraits yet. 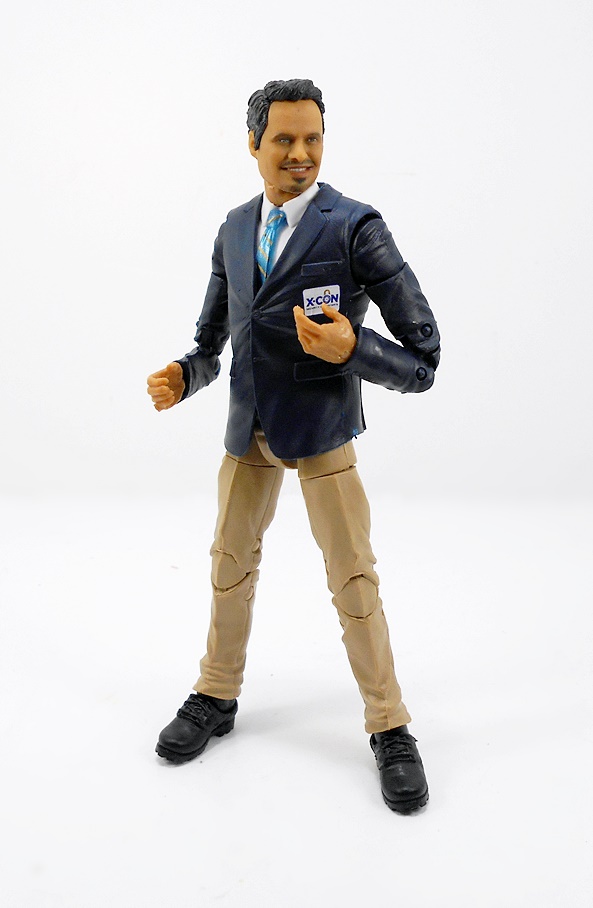 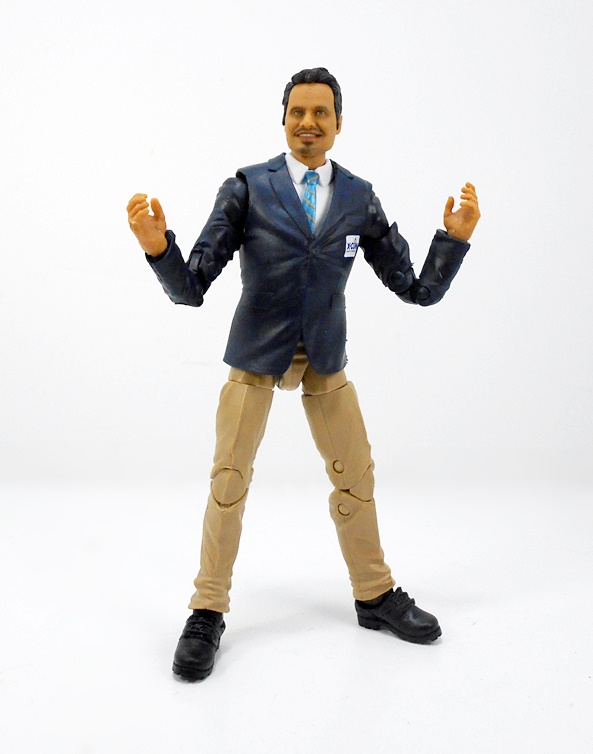 There aren’t any surprises in the articulation, except maybe that his legs use ball joints instead of rotating hinges. The rest of the legs feature swivels in the thighs, double-hinges in the knees, and both hinges and lateral rockers in the ankles. I actually bent my figure’s left leg a little too far and thought I snapped it at the thigh swivel, but it turns out it just plugs right back in, similar to a BAF connection. The arms have rotating hinges in the shoulders and wrists, the elbows have double-hinges and there are swivels in the biceps. He can swivel at the waist, there’s an ab-crunch buried under the jacket, and the neck has both hinges and ball joints. I didn’t really need my Luis figure to be super articulated, so what’s here is more than I could have needed or wanted. 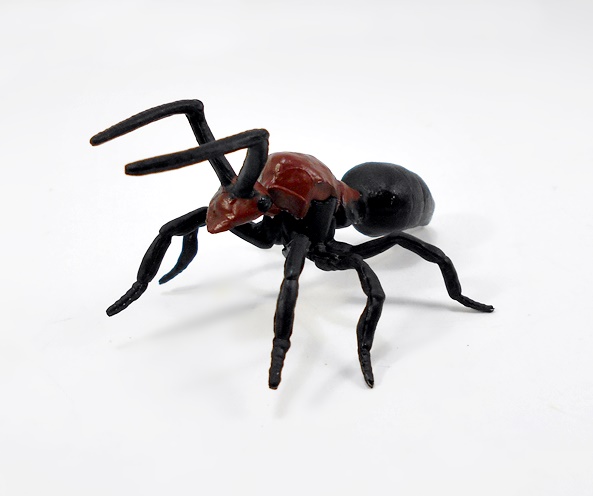 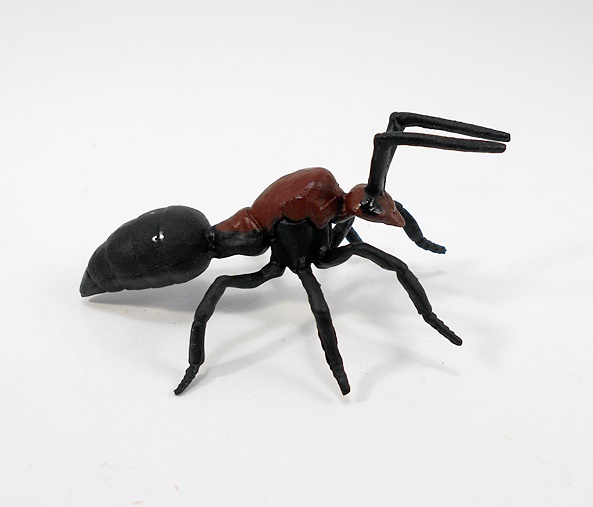 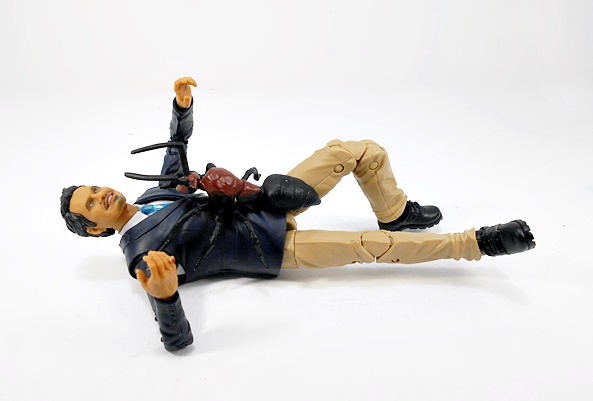 The accessories in the box can really go with either character, but let’s just look at them now before moving on. First off, you get an enlarged ant, which is just a static piece. It’s a decent sculpt with some brown and black coloring. There’s nothing particularly noteworthy about it, but I’m glad they included it. 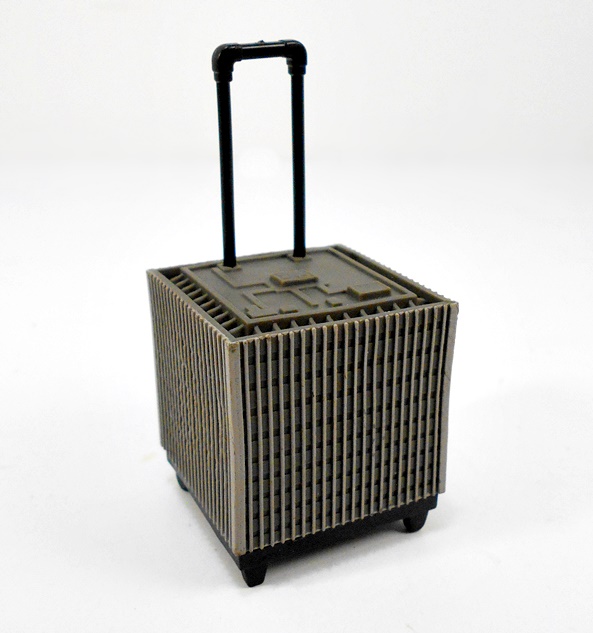 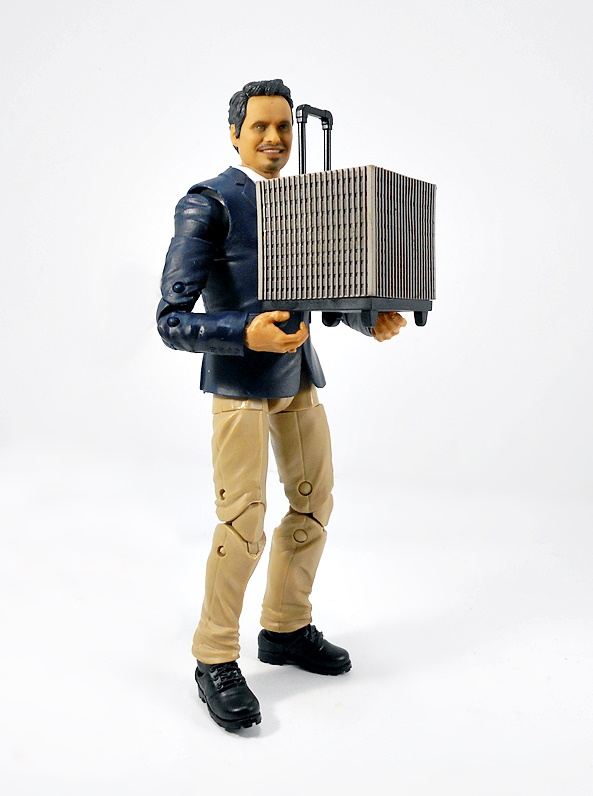 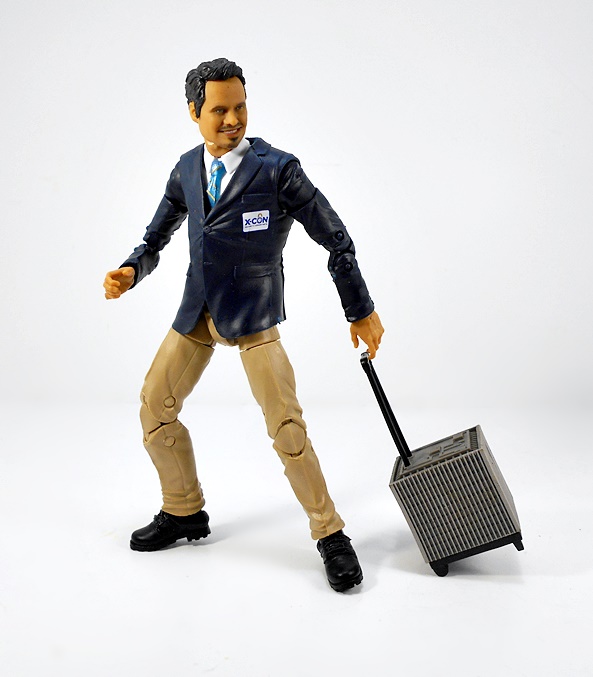 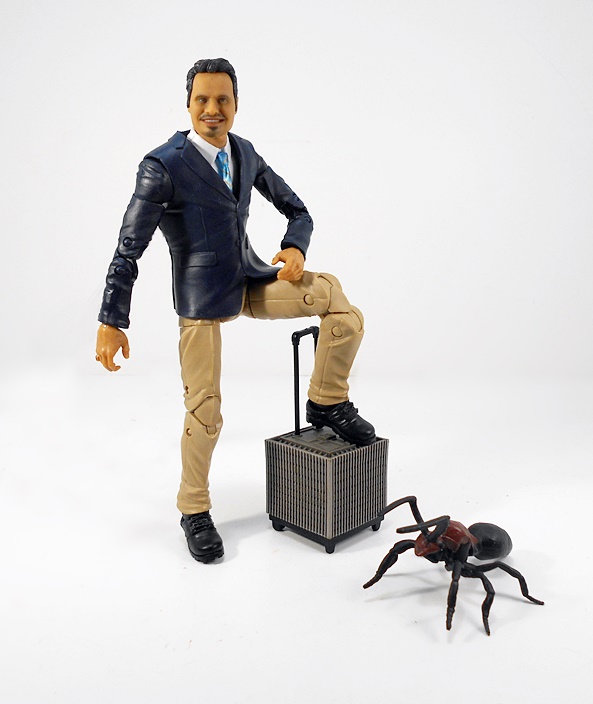 The coolest thing in the box is easily the shrunken down Pym Lab. I remember seeing the trailer and thinking that the shrunk down building was just a fun gag, and it turned out to be a major plot point for the whole flick. Anyway, this tiny building has an extending grab bar so it can be easily toted along. OK, let’s move on to Ghost. 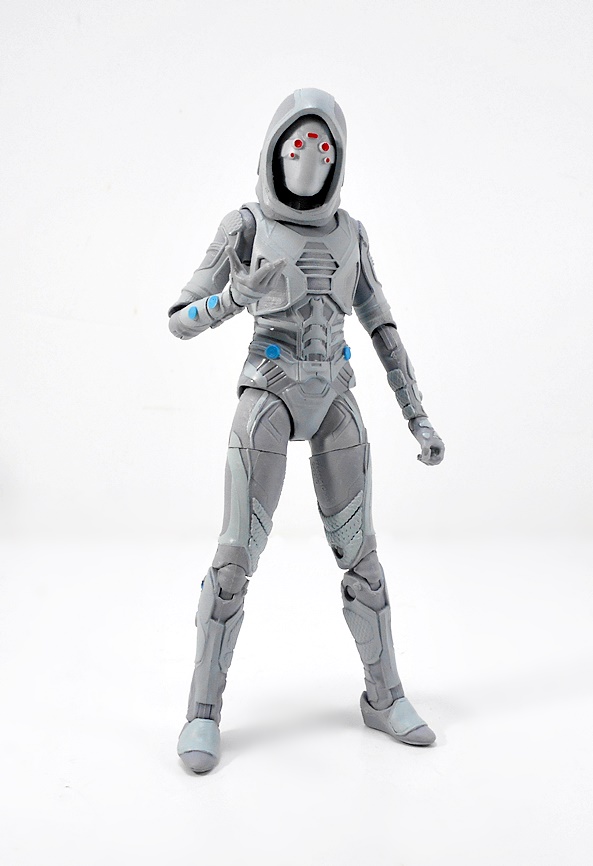 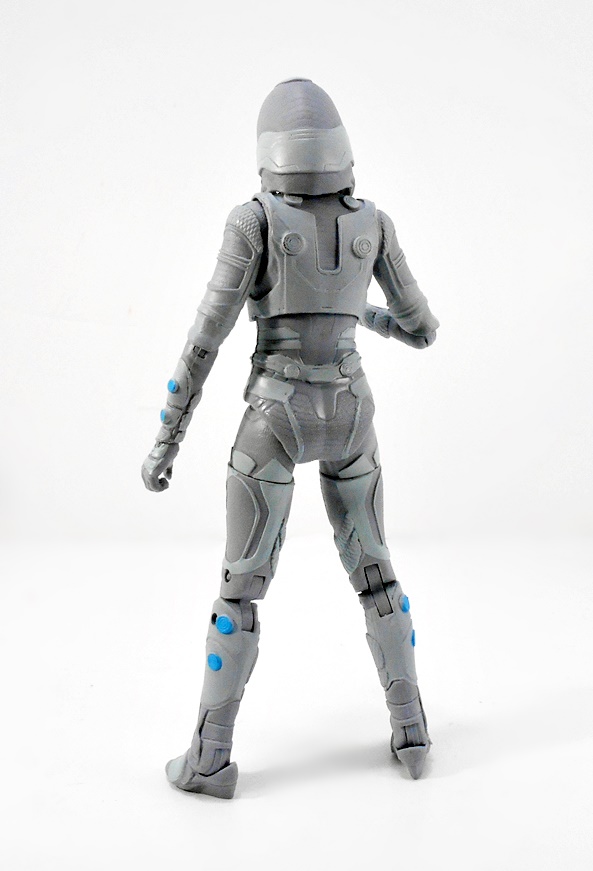 Honestly, Ghost was not a terribly compelling character to me, and I wouldn’t rank her up as one of the better villains in the MCU. Still, she wasn’t bad, and I do like the running trend of giving these villains a degree of empathy rather than make them all mustache twirling psychos. But laying that aside, I really did dig the design of the suit in the film, and I’m enjoying it even more here. It just makes for a great looking action figure. Ghost is cast in a matte gray plastic and sculpted with layered panels to give it some sensation of depth, as if there’s a sort of framework placed over a textured mesh undersuit. The detail is quite impressive for a figurei n this scale, and the bright blue paint hits really makes the figure pop nicely. I have to imagine that someone over at Hasbro is licking their chops over the possibility of charging me $20 for a translucent version of Ghost. Hell, make it $40 and bundle her with Kurt. Why the hell not? 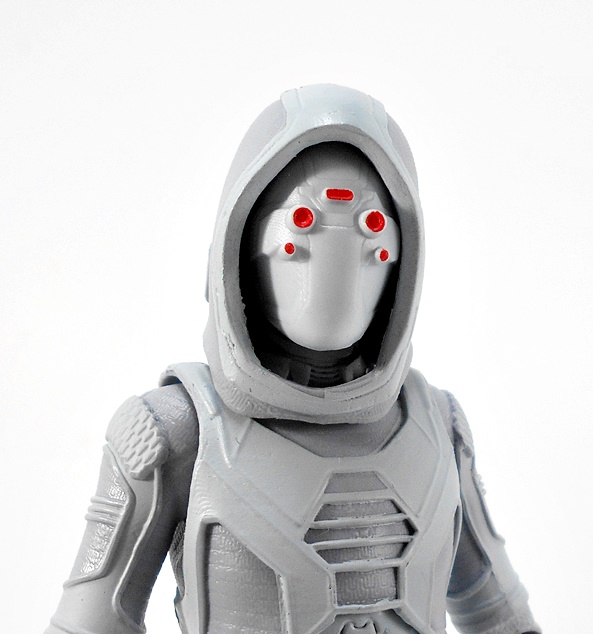 The masked head is a separate piece from the hood, allowing for it to articulate fairly well. The face mask is mostly featureless, except for the red “eyes” which pays homage to the comic version of Ghost. And like those blue points on the body, the red paint here stands out beautifully against the otherwise colorless figure. 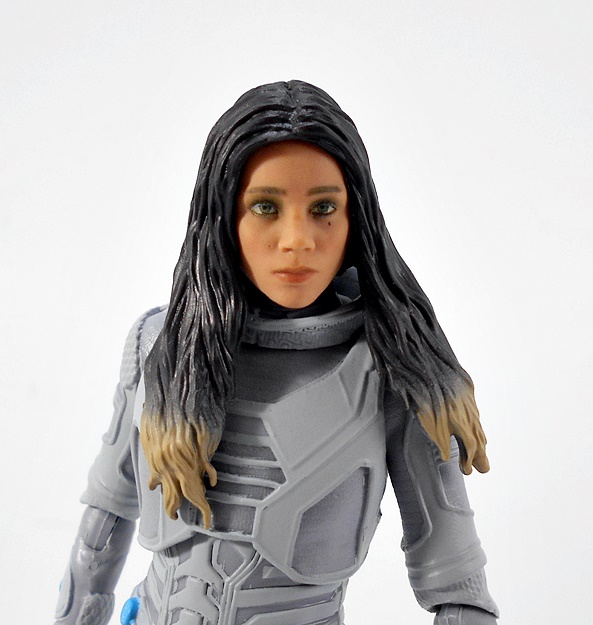 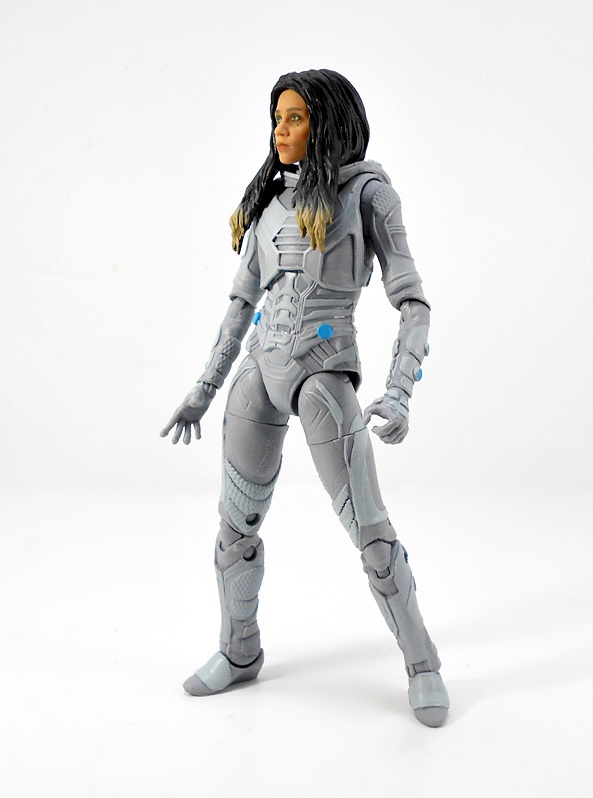 You also get the unmasked portrait of Ava Starr and a second hood piece, which is sculpted in the down position. This is a decent enough likeness to the actress, but the combination of her long sculpted hair and the hood piece limits her neck articulation. I think the paint on the ends of her hair is a little heavy handed too, but now I’m just nitpicking. 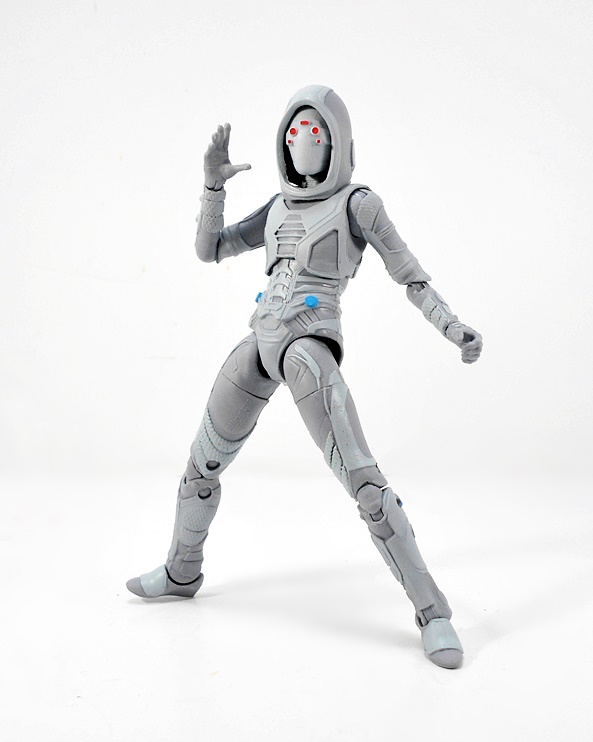 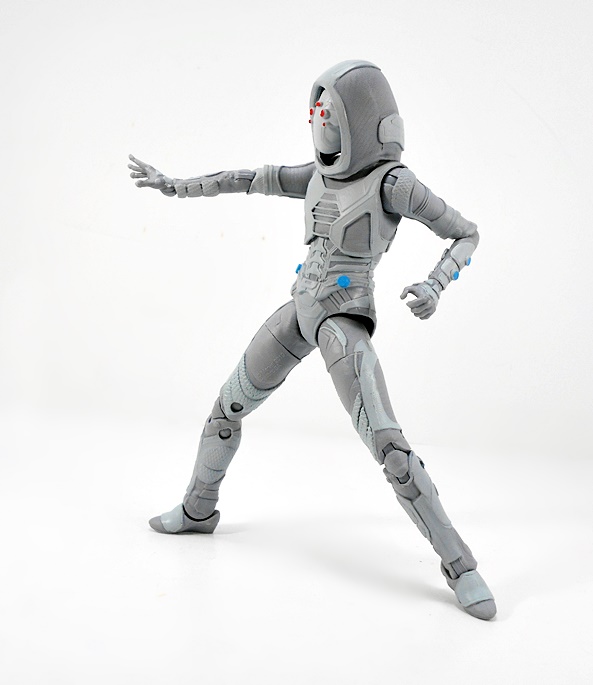 And Ghost’s articulation is right in line with what we usually see on the Legends gals. That means ball joints in the hips, swivels in the thighs, double-hinged knees, and both hinges and lateral rockers in the ankles. The arms have rotating hinges in the shoulders, elbows, and wrists. She has a ball joint under her chest and the neck is both ball jointed and hinged. 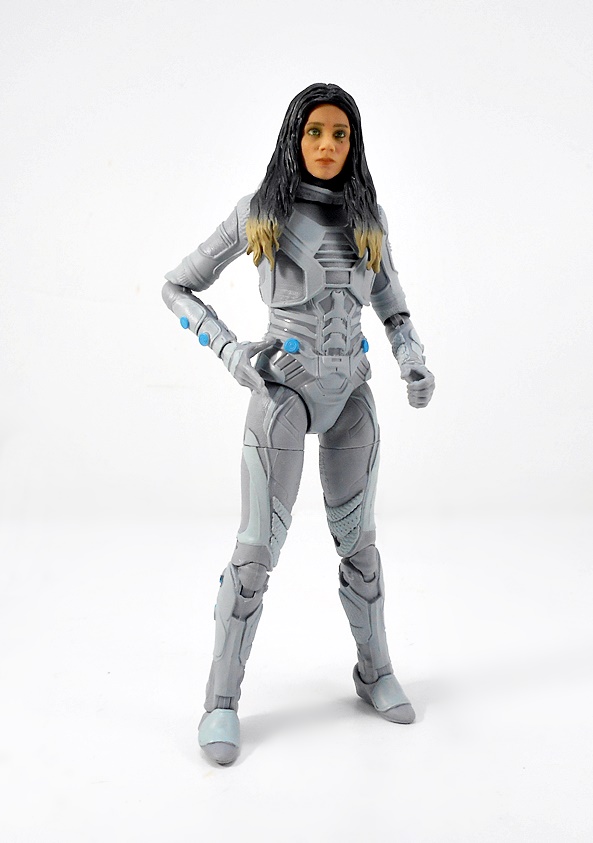 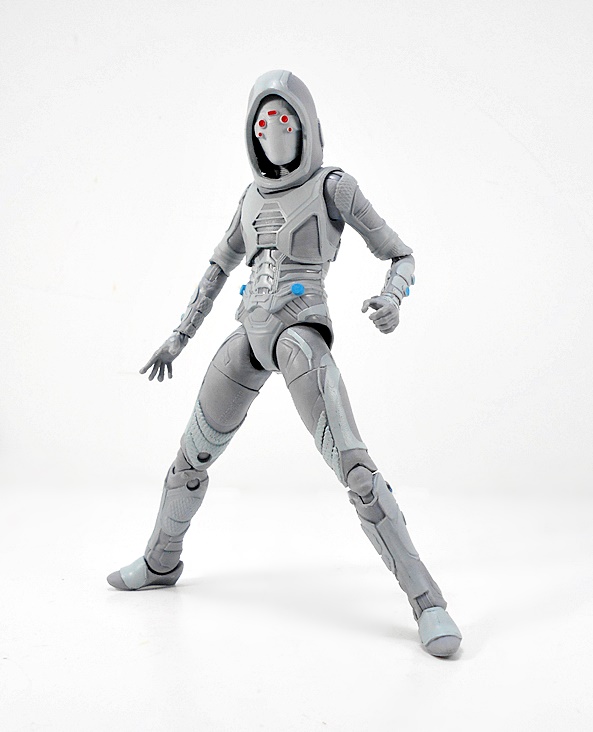 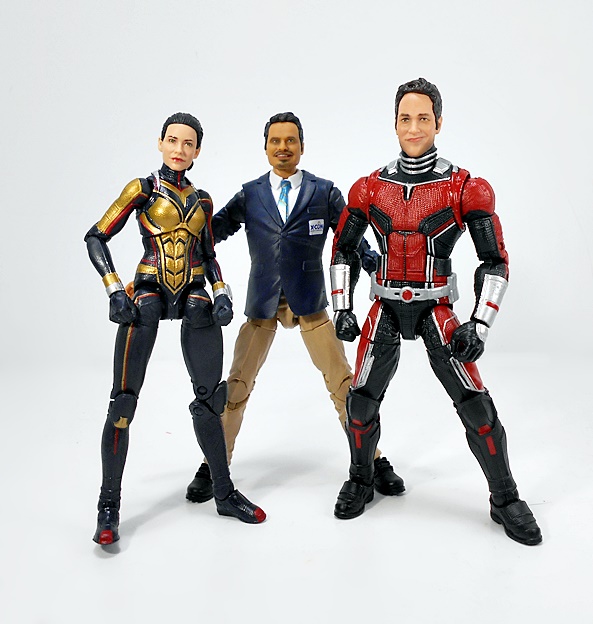 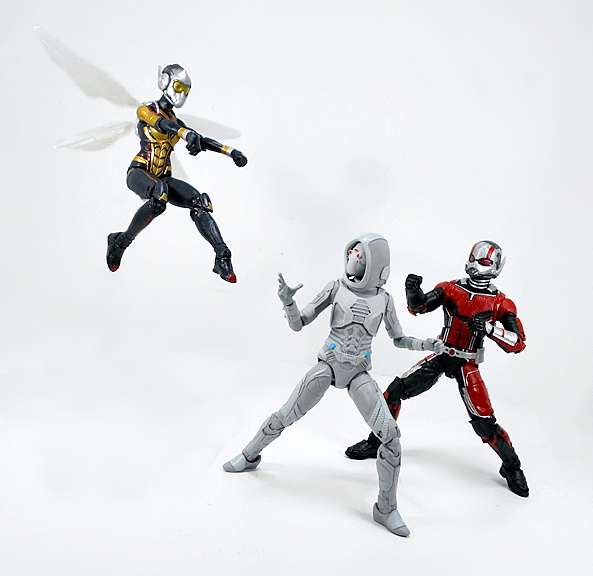 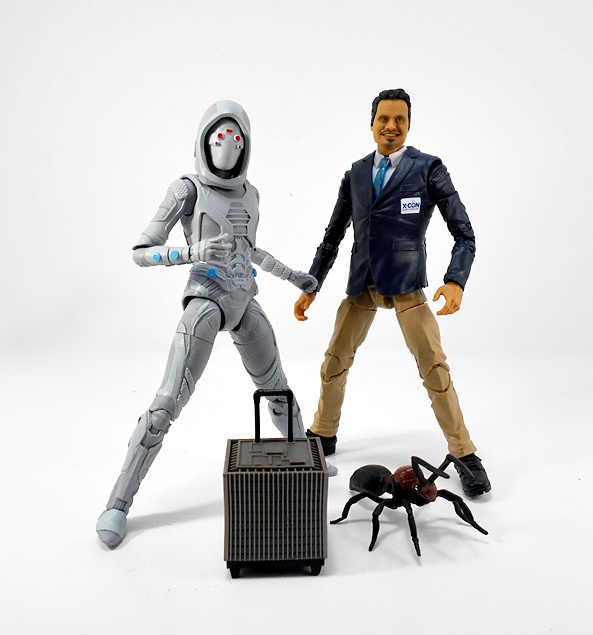 I came very close to taking a pass on this set, but a couple of price drops and my desire to add Ghost to my collection nudged me to pull the trigger. Her costume design makes for quite a stunning figure and I really think that the villains from all the movies should get the Legends treatment anyway. As for Luis? I really don’t mind getting him into my collection either. He may not be the most exciting figure around, but Luis was certainly a major character, and it always gives me a little chuckle to see just how far Hasbro will go when it comes to character selection. I think this set originally retailed for $40, but I picked up mine on sale for about $30. Will it reach the depths of that Ego and Star-Lord set? Only time will tell!