It’s been a real struggle for me to get back to three reviews a week. I mean, you can see how well it’s been working out for me. So, until I get there again, In an effort to get caught up, I’m going to be trying to bundle reviews a bit more often, especially when it’s appropriate. And when I’ve got two Transformers police cars from the same mold waiting to be opened, this seems like one of those appropriate times. Let’s check out Prowl and Barricade! 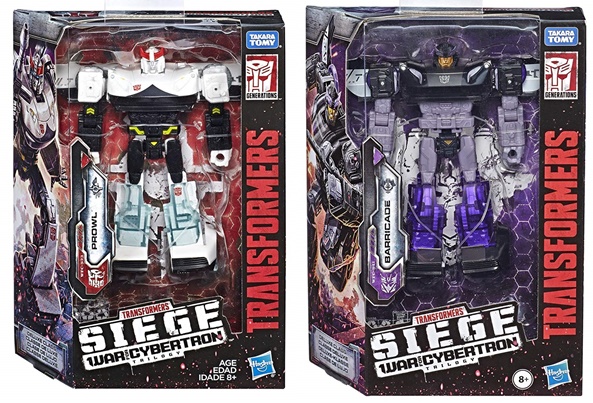 If you comb back through FFZ, you will find evidence of my undying love for Prowl. The original G1 toy was one of my first Transformers, it was my favorite Autobot mold, and whenever I played with my convertorobots, he stood prominently as Optimus Prime’s first lieutenant and all around right-hand-bot. Hell, even when I watched the Sunbow cartoon I would lament and stew over the fact that Prowl wasn’t in it more often. I’ve been patiently waiting for my boy here to get a proper toy update. After all, the Classics version has aged horribly and the Combiner Wars version was really never more than a place-holder for me. As for Barricade, well I’m not someone who’s anxious to see a lot of Bayverse Transformers shoe-horned into my regular Transformers line, but I will admit that seeing Barricade turn up in Siege has intrigued me a bit. He was one of the cool things I liked about the original film and doing him as a repaint of Prowl seemed like a no-brainer. So let’s start with the alt modes! 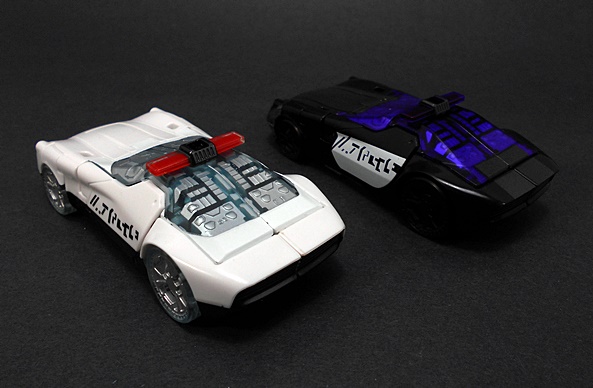 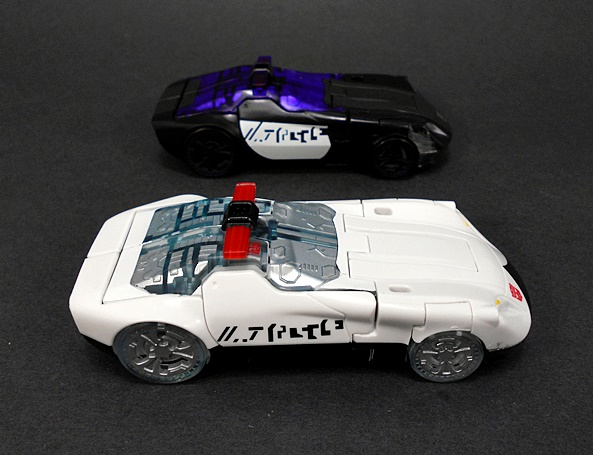 Obviously, Siege is focused on Cybertronian alt modes, so my hopes for a proper Datsun are quickly dashed. What we get instead is a Cybertronian interpretation of the Datsun and it looks remarkably like its Earth counterpart. The only big difference is the atrophied cabin, after all these aren’t supposed to be vehicles for meat-bags, and the translucent wheels for cruising down alien roads. There are also some exaggerated contours to give the body more of a futuristic flavor. And hey, I can get behind all of this just fine. Prowl’s white body and black trim certainly looks familiar and while the Cybertronian script on the sides is unintelligible to me, it mimics the police markings just fine. There’s even a light-bar and an off-set Autobot emblem on the front of the hood. I dig it.

As for Barricade, he retains a good deal of his coloring from the first film and I’ll be the first to say this deco looks great. A black-and-gray body with white doors and the same alien “police” script on them gives us a perfect Cybertronian nod to the Bayverse Decepticon. The translucent purple used for the faux canopy is gorgeous and the same plastic is used for the wheels as well. The snappy new deco is tied together with a Decepticon emblem stamped on the front of the hood. It’s a great looking car!

Each figure comes with a weapon, which can be plugged into the light-bar for those rolling highway battles. Prowl’s actually resembles his G1 gun quite a bit, while Barricade’s is a double-barreled weapon which can split into two pistols. Transforming these guys is a pretty straight-forward variation of the original toy. Sure, it’s a bit more complicated, but not too much. I was able to get these guys to robot mode and back without any instructions, so you know it can’t be that hard. So how’s about them robot modes?

Yeah, what we have is very similar to the Prowl I know and love. His proportions aren’t quite perfect, as he strikes me as having extra broad shoulders. It’s a similar style to Siege Sideswipe and it is not by any means a deal-breaker for me. Quite the contrary, I think these guys look fantastic. The jutting hood chest remains my all-time favorite Autobot design, complimented by the door wings. Conspicuously absent is any sign of shoulder-mounted guns, giving all the third-party companies out there a chance to make some money. The lower legs still form out of the hatchback, but in this case heel-spurs are added to fold out and grant stability. These guys aren’t quite as well polished when viewed from the back, but I’ve certainly seen worse.

As for the decos, they remain pretty faithful to their respective car coloring. Prowl adds some yellow paint accents on his lower chest as well as the sergeant stripes on his biceps, which is just a lovely touch. Barricade adds a new color to the mix, which is like a pale gray-lavender for his arms, upper legs, and torso. As with all Siege figures, there’s a lot of detail to the sculpts by way of panel lining, and Barricade shows these off much better because of the lighter color plastic.

If you’re looking for a G1-faithful portrait, Prowl’s head sculpt is just about perfect. I don’t think I would change a thing about it. The “helmet” is well defined and includes the red horns jutting out from the center ridge. His noble Autobot face features some snappy silver paint. I’d go so far as to rate this portrait right up there with the Masterpiece version, it really is that good!

For Barricade, I’m happy to say that Hasbro designed a brand new face because the f’ugly Bayverse bug-faces just don’t belong in this line, and I really like what they did with it. His facial features aren’t quite as sharp as Prowl’s, but he does look appropriately grim. The brown face is an interesting choice and I suppose it goes well with his darker deco. The “helmet” is similar to Prowl’s as it shares the central crest with protruding horns, in this case purple, but there’s enough differences to set it apart and make it distinctive. 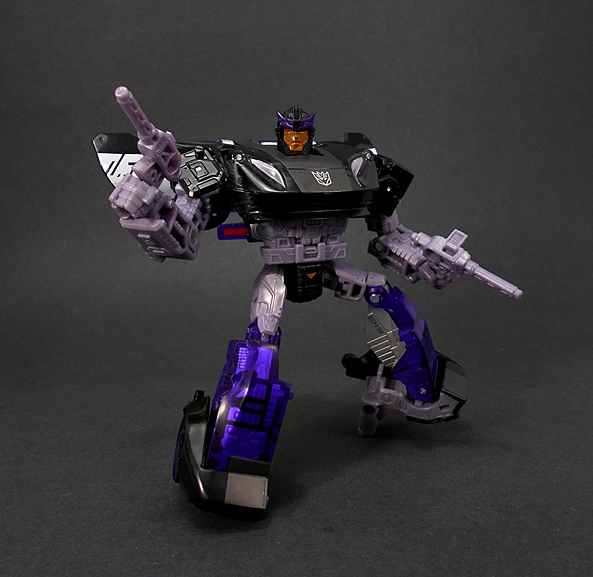 Obviously the guns we saw in their alt modes can be wielded in their hands. Once again, Prowl’s pays homage to the original G1 figure’s gun and is cast in white plastic. Barricade’s can be used as a single weapon or split into two pistols. 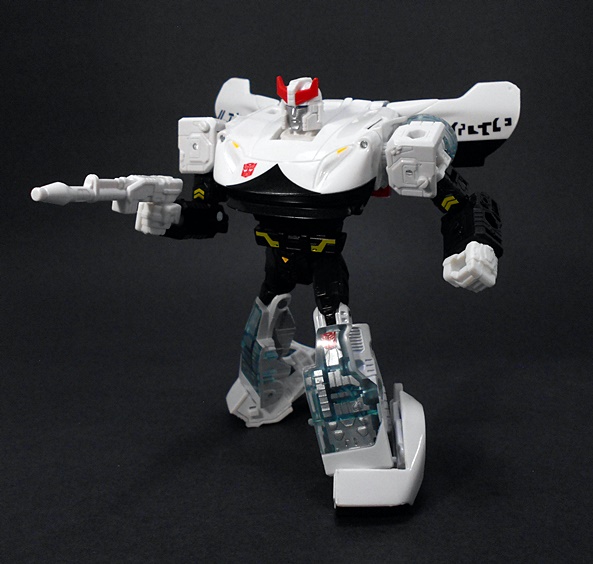 So far Siege has failed to truly disappoint me and that track record isn’t going to be upset today. Prowl and Barricade are excellent figures, and coming from me, that’s saying something because I hold my Prowl figures to high standards. Actually, I’m usually just happy enough to get them at all, but in this case Hasbro did the design proud in both robot and vehicle modes. These guys look great, are quick and easy to transform, and they are tons of fun to play around with. Of course, we haven’t seen the last of this mold, and Siege Smokescreen will be hitting my doorstep sometime next week. I probably could have waited and reviewed all three together, but I’ll just have to come back and give him his own look when I get the time.