We’re four episodes (five if you count today!) into The Mandalorian, the new Star Wars series on Disney+, and I’m happy to say that I’m enjoying it a whole hell of a lot. It’s refreshingly simple, well crafted, and the backdrop is rich with the Star Wars Universe. I already reviewed the Black Series figure of the titular character, and now I’m back to check out Cara Dune, a character that made her appearance the very same week that her figure was hitting my doorstep. Now that’s some pin-point timing on your distribution, Hasbro! Too bad you ain’t got none of them Baby Yoda’s to sell. What? Mattel is making that? WHAT?? It won’t be out until later next year? What the hell is going on over there, Disney? Don’t you and Hasbro like money anymore??? 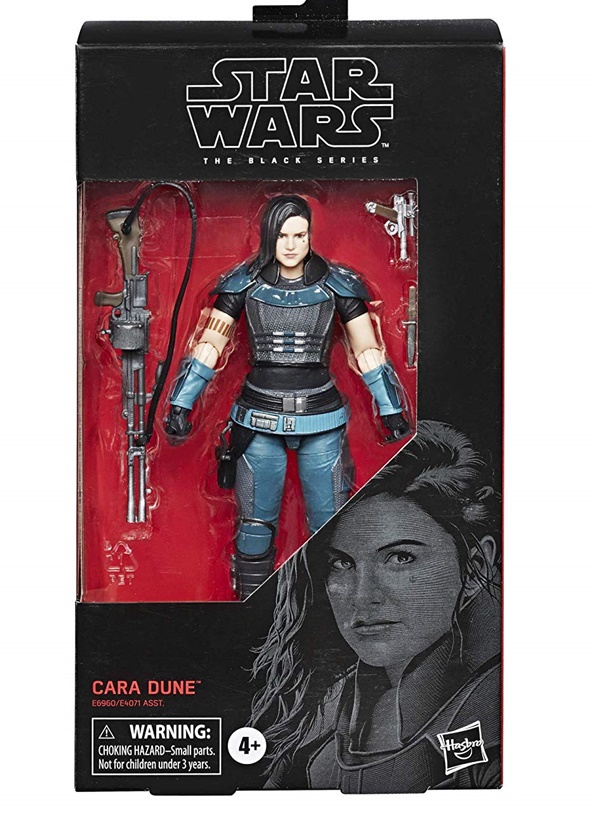 Setting aside the lack of Yoda Babies, we are introduced to Cara Dune in Chapter Four: Sanctuary, which plays out like an old episode of The A-Team. Or that episode of Enterprise where they have to defend a colony against Klingon raiders by teaching the locals how to fight. Here, The Mandalorian and his new associate, Cara, must defend a village from raiders who also happen to have a pet droidified AT-ST and they need to improvise. Despite an eye-rolling cliche clip of the villagers getting drilled with the use of quarter-staffs, it was most enjoyable and the script does a nice job fleshing out Cara’s character and actress, Gina Carano does an equally fine job bringing her to life. I’m presume we’ll be seeing more of her, but instead of speculating, let’s have a look at her figure. 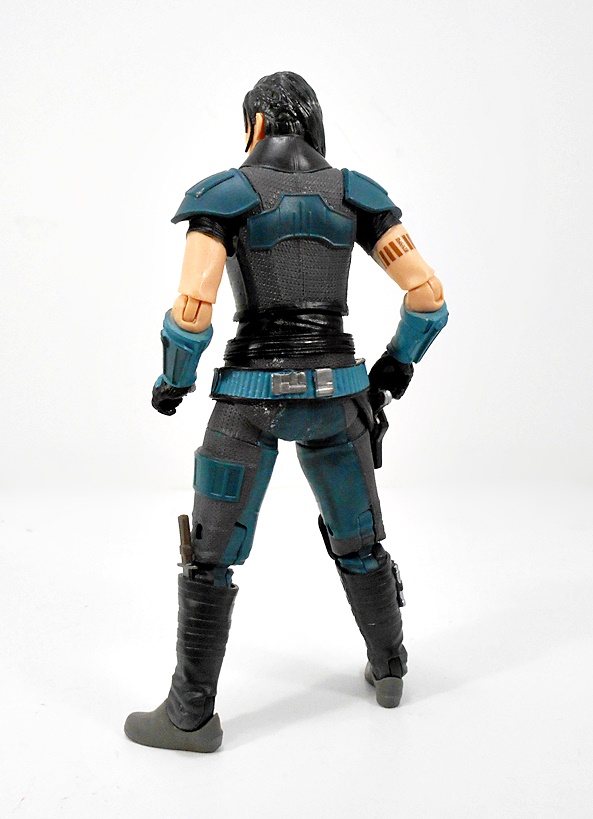 As a former Rebel fighter and all around roughian, Cara comes sporting a set of armored fatigues that look right at home in the Star Wars Universe. The ensemble consists of a chest-plate, shoulder armor, grieves on her forearms, and a single right knee-guard, because to hell with the left knee, right? The outfit is all part of the body sculpt, which makes some nice use of texture for the chest and back pieces, as well as the outer portions of the legs. She’s got a couple of sculpted gear belts, one of which supports a working holster on her right hip. Her boots have sculpted wraps leading up to her knees as well as some code cylinders strapped to her lower right leg. The blue, gray, and black deco is certainly distinctive, and there are plenty of silver paint hits to the buckles and gear. There’s also some very nice weathering on her armor, which looks good and is used sparingly. Finally, a tattooed segmented band encircles her right bicep. The sculpt and paint here are both excellent, and I also dig how the figure’s build matches Carno’s powerful stature.

And speaking of matching, the portrait here is a pretty solid likeness for the actress, but I don’t think it’s among their best. I think it’s very good from certain angles, but from others it loses me a little. But hey, if we’re grading the Black Series on a curve because of some truly lackluster portraits, I think this one still ranks in around a B+. Not as good as what we’re seeing from Hasbro’s Marvel Cinematic Universe figures from down the hall, but I’m not going to quibble about it. The hair is particularly well done, sculpted separately from the head and covering part of her right face, while strands fall down the other side between her cheek and ear. 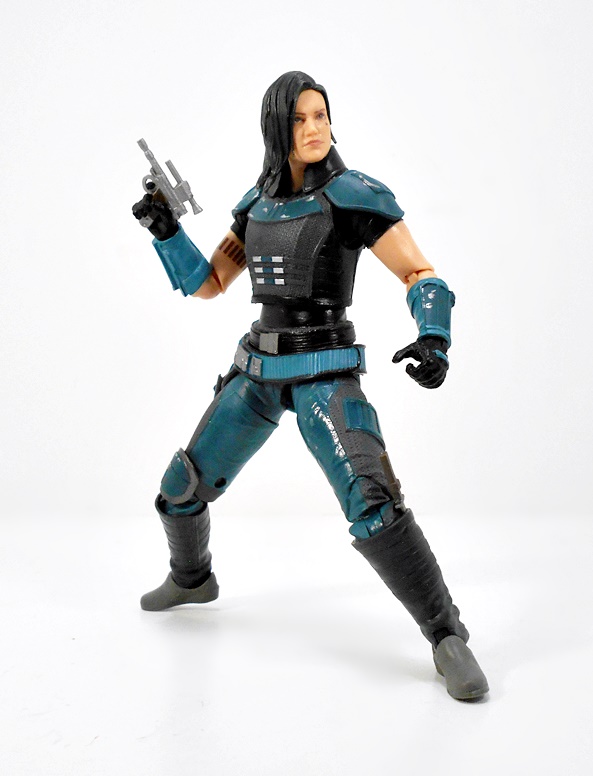 I’ve already mentioned the functional holster, which holds her blaster pistol, and includes a retaining strap that fastens with a peg and hole. We got to see this weapon up close and personal in her battle with The Mando and it features a lot of great detail in the sculpt as well as painted grips. The pistol strikes me as a little demure for her, but nevertheless it appears faithful to its on screen counterpart. She can hold it in either hand, but it works best in the right hand with the hooked trigger finger fitting through the trigger guard. 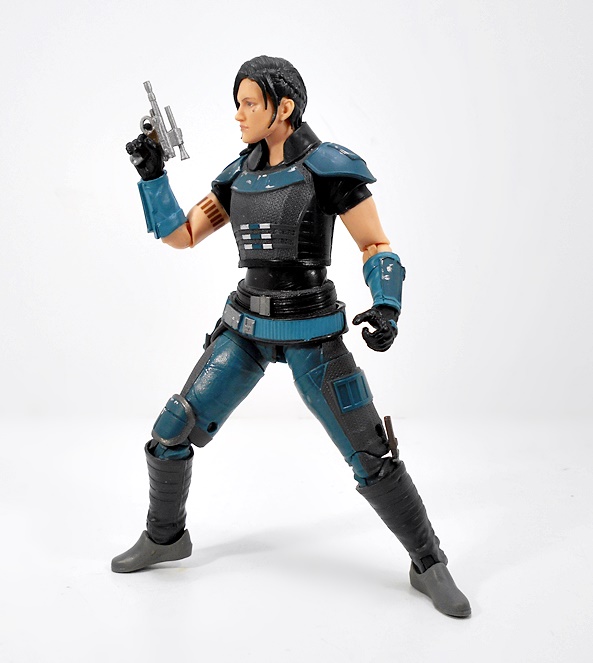 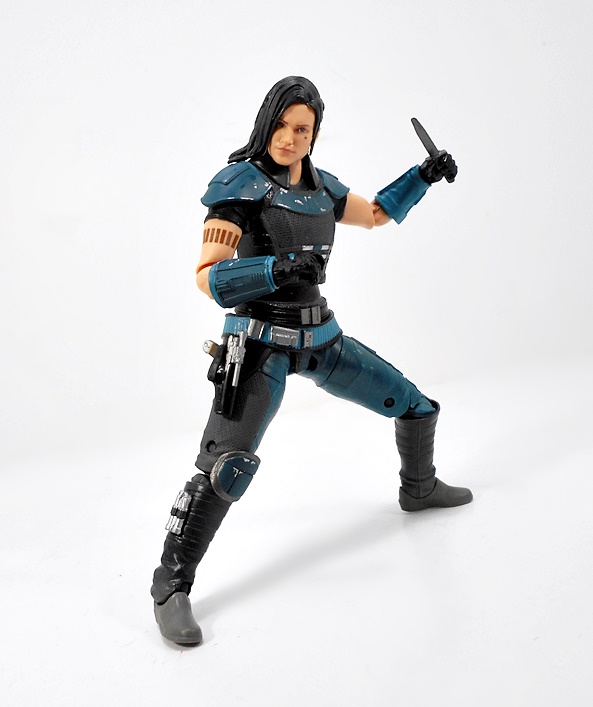 Next up, she comes with a little combat knife, which can be held in either hand. I struggled for a bit to figure out where this goes on her outfit before spotting a little slot on the side of her left boot. It’s a simple accessory, but still quite welcome. 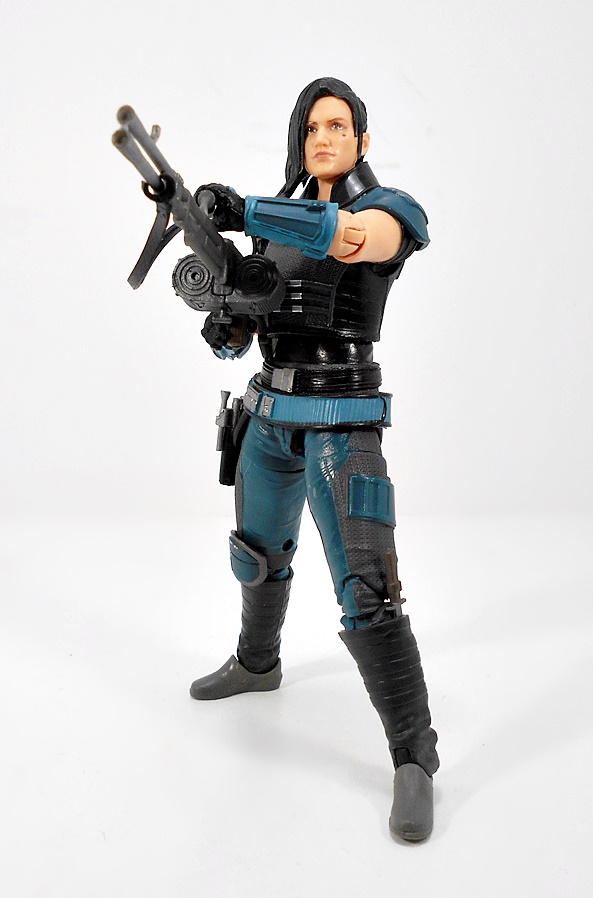 And finally, Cara comes with a weapon that seems more suited to her stature and that’s this heavy blaster rifle. This big boom-stick features a cool over-under double-barrel design, not to mention two big drums of whatever passes for ammo in the Star Wars Universe these days. Like the pistol, there’s some excellent detail work on this weapon, brown paint on the grip and stock, and it includes a grab bar on the top so that Cara can wield it with both hands.

It also includes a shoulder strap, so she can carry it on her back. Nice! 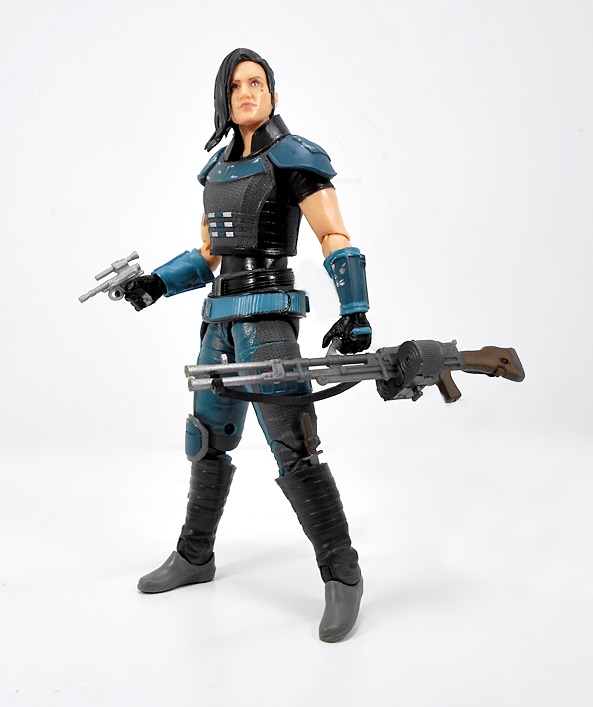 At a time when I’ve been considering slowing down on the 6-inch Black Series, Cara comes along and rekindles my interest in this line. Or perhaps it’s more accurate to say that’s the case for The Mandalorian in general. I don’t see myself buying a lot of figures from Rise of Skywalker, because I just don’t think I’m going to end up liking the film all that much. Hopefully time will prove me wrong. But The Mandalorian is another story entirely and I sincerely hope that Hasbro starts pumping out figures from this line at a quick pace. There’s already quite a few that I’d like to see from the first handful of episodes.