On the last Marvel Monday I checked out Squirrel Girl as part of the Marvel Legends Deluxe Riders series, and I commented on how I couldn’t believe Hasbro was taking the risk of bundling a character like Doreen Green in a $40 set. Surely they need to reserve these higher priced releases for more mainstream and important characters. But when faced with these questions Hasbro simply says, “Hold my beer” and bundles Cosmic Ghost Rider in the same assortment. 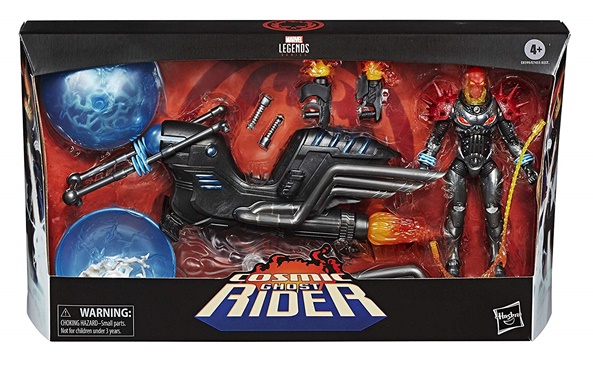 Now granted, there’s a world of difference between releasing Squirrel Girl on a scooter and Ghost Rider from Earth-666. That difference being that even if I had no idea who or what this figure represented, I’d still have picked it up because it looks all sorts of bad ass. Of course, it doesn’t hurt that this is Frank Castle back from Hell itself and infused with powers from both Mephisto and Galactus, and granted a bitchin’ space bike so he can go hunt down The Mad Titan, Thanos, and slay him to avenge the fallen Earth. Does anything get more bad ass than that? No. So why didn’t they put that on the package? Anyway, the set comes in a big window box that shows off the figure and the partially assembled bike. There’s not too much to slapping it together, but let’s start with the figure. 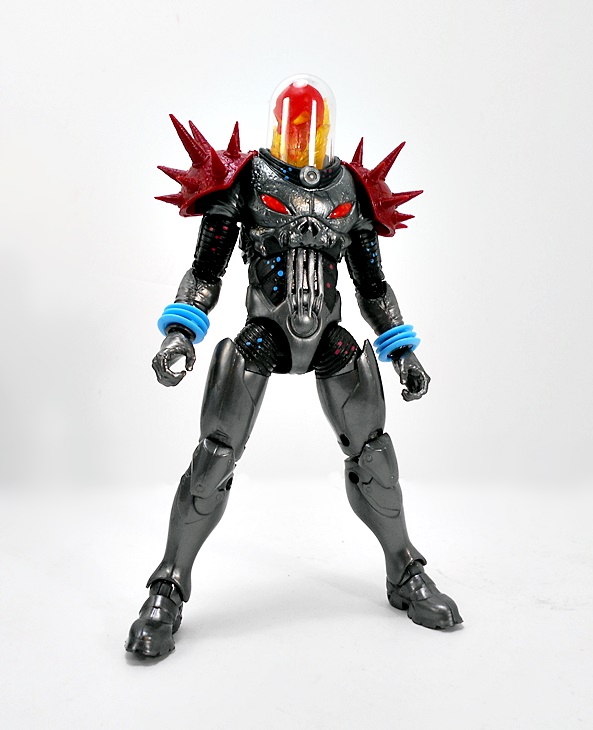 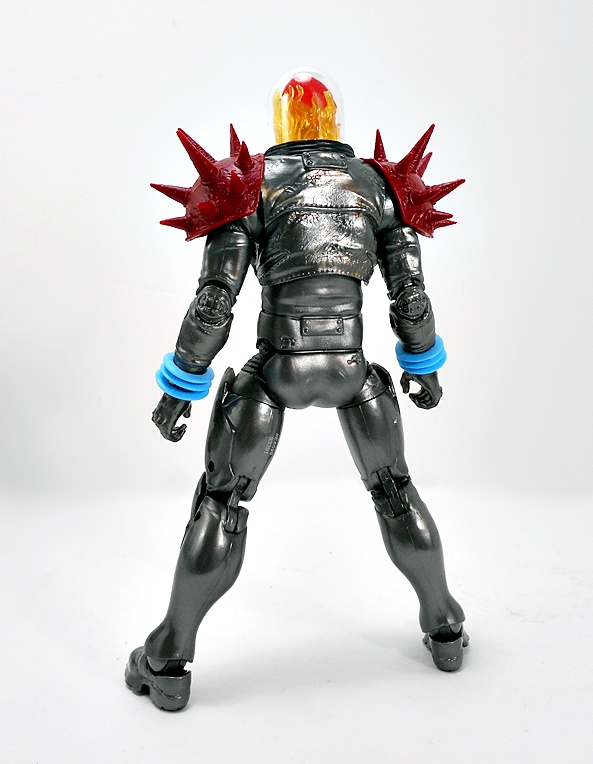 Holy shit, if I didn’t know better I’d swear this character design crawled out of a comic panel from the early 90’s. Frank’s new duds include a partially armored and twisted version of his skull-centric costume that we know from Earth-616. The skull itself is now sculpted into chest armor, emblazoned with two crimson red eyes and teeth like blades reaching down to his armored belt. His legs are also encased in armor, his shoulders sport a set of most deliciously ridiculous spiked red pauldrons, his wrists are encircled with space-age rings, and under it all is a black ribbed suit that’s speckled with red and blue Kirby-Crackle. You’ll no doubt note that Frank is sporting a rather awkward looking gap up in that crotch, and that’s no doubt to make him work on the bike. Hey, I’m cool with that. I doubt I’m ever going to pose him off the bike anyway. From behind, Frank is sporting the back half of a leather jacket, which makes no real sense to me. It just doesn’t jibe with the front at all. But it’s this kind of impossible ensemble that works when dealing with the reality-bending Cosmic Marvel. 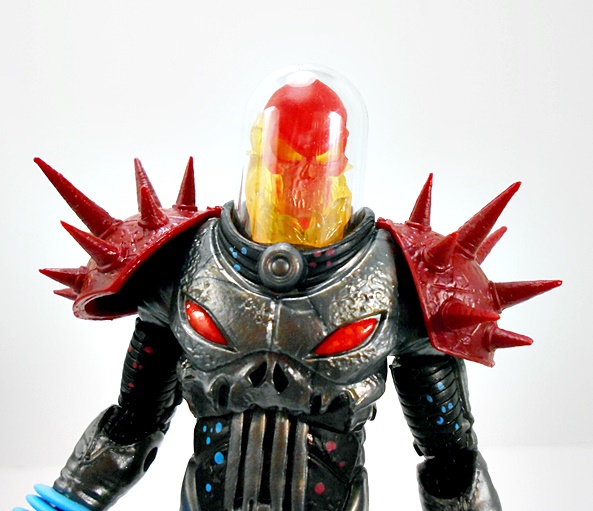 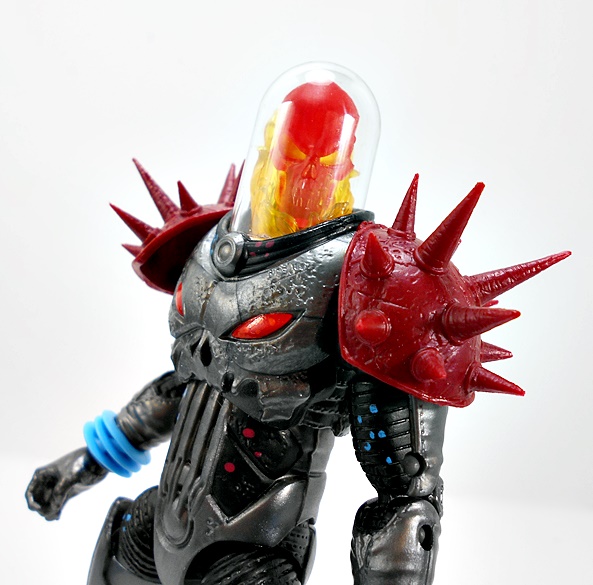 Frank’s noggin has been transformed into the familiar flaming skull of the Spirit of Vengeance, but this time the translucent red skull sits engulfed in yellow flames inside a clear dome. It looks amazing and I was happy to see that you can pop off the dome to rotate his head from side to side. 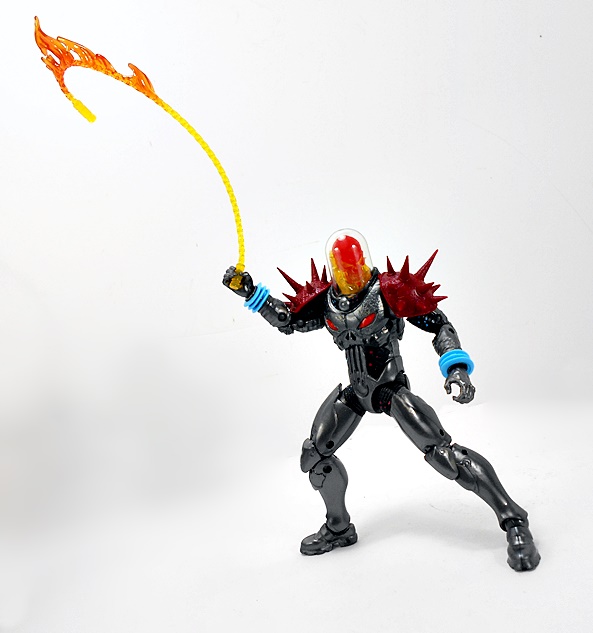 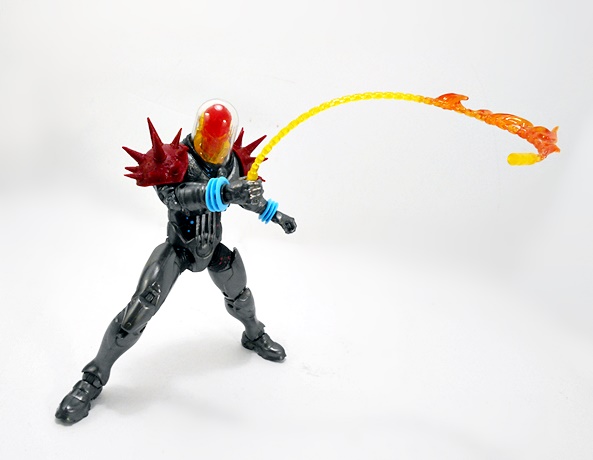 The Cosmic Rider comes with a few fun accessories, the first of which is his flaming chain whip. This piece is made out of bendy transparent yellow plastic with orange flame licking off the edges near the tip. Both ends are sculpted as handles giving some options for display. 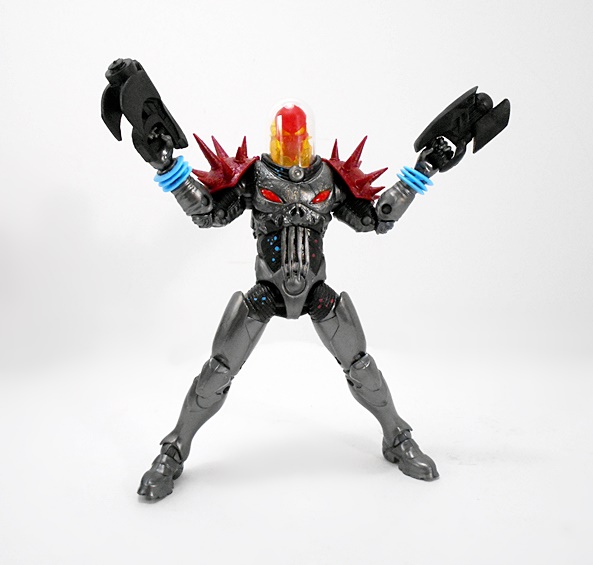 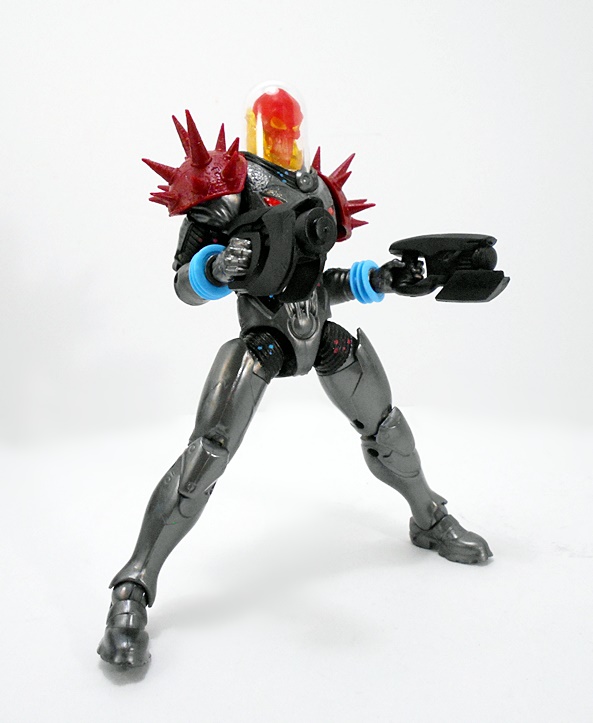 Next up, he comes with a pair of futuristic pistols and each one is a unique sculpt.  These big, chunky weapons are cast all in black plastic and aren’t overburdened with a lot of sculpted detail. They have rather distinctive designs and he looks damn fine wielding them akimbo. 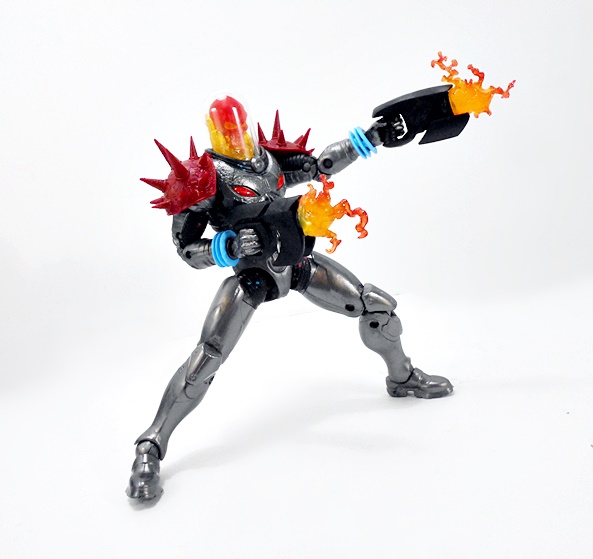 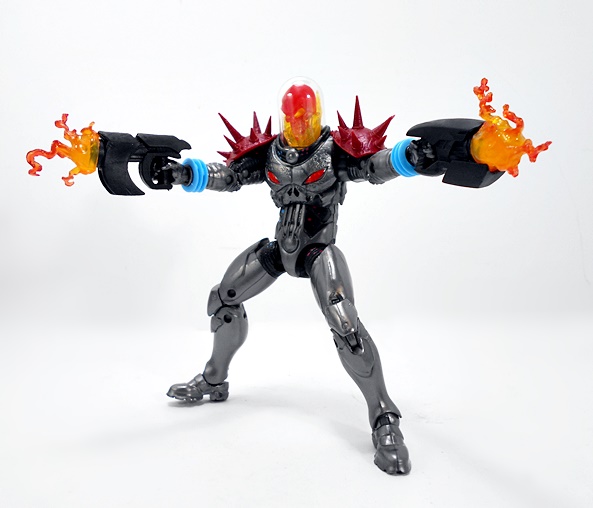 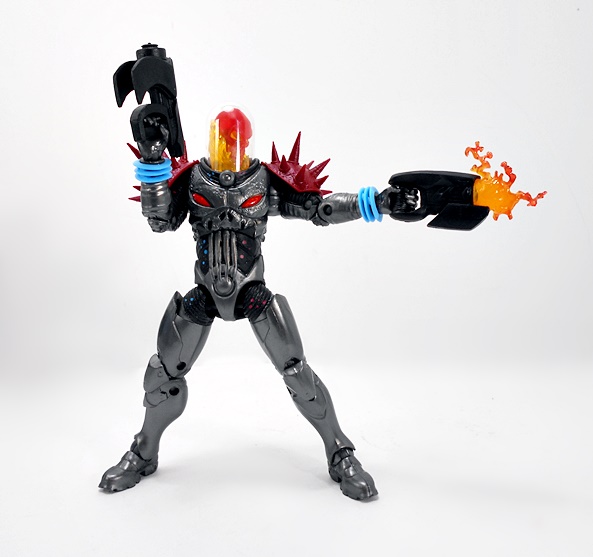 And they each come with firing effect parts, which plug into the ends of the barrels and look great! And that’s all the little accessories out of the way, let’s check out that bike! 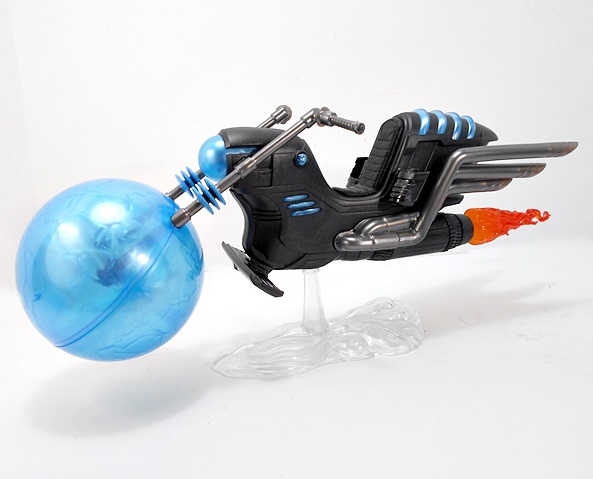 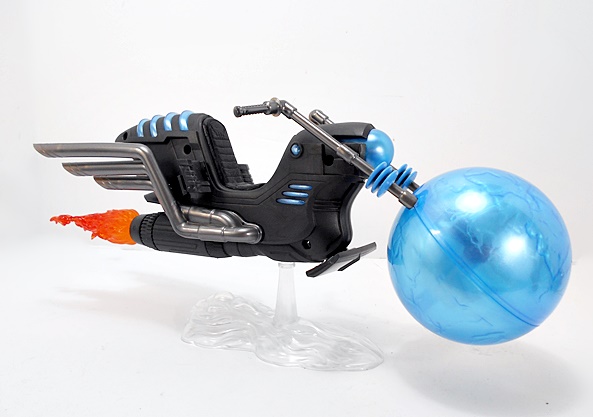 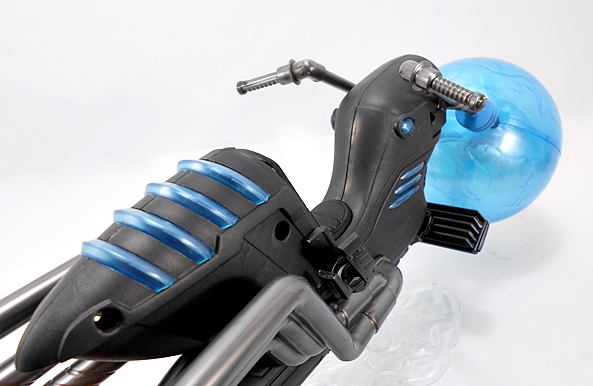 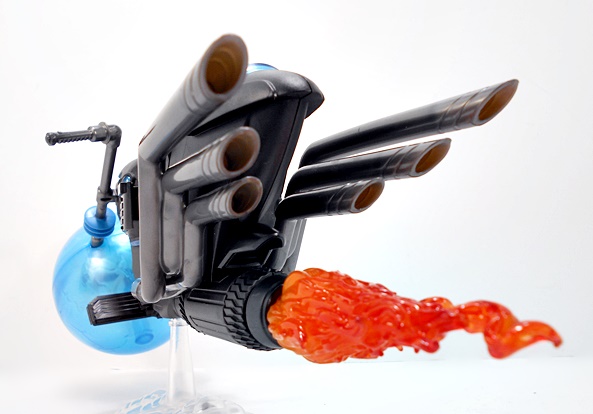 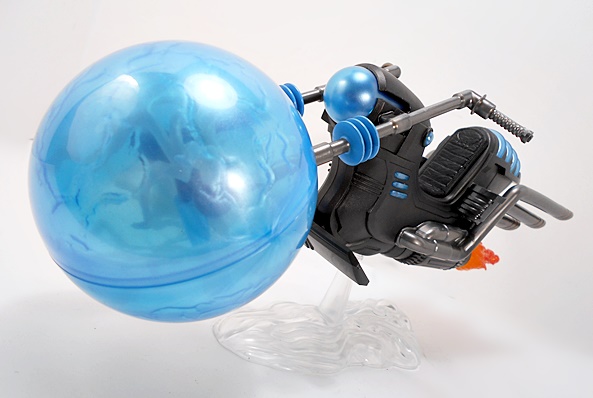 Wow, this thing is big, and I absolutely love the design! In place of the front wheel is a massive blue globe of energy, with white plastic tendrils of energy visible inside. I’ve simply got to find a little battery powered light for inside it! The chopper-style handlebars protrude from it and connect it to the bike’s sleek black body. The body includes a bulbous blue headlamp, some raised blue bands on the sides and behind the seat, floorboards for The Rider to rest his boots, and branching exhaust pipes sweeping off each side of the back. The back also features an exhaust port with a translucent red flame effect part erupting out of it. The entire bike rests easily on a transparent plastic base and it’s mounted on a ball joint, so you can position it at various angles for display. No doubt about it, Hasbro did a beautiful job recreating this bike! 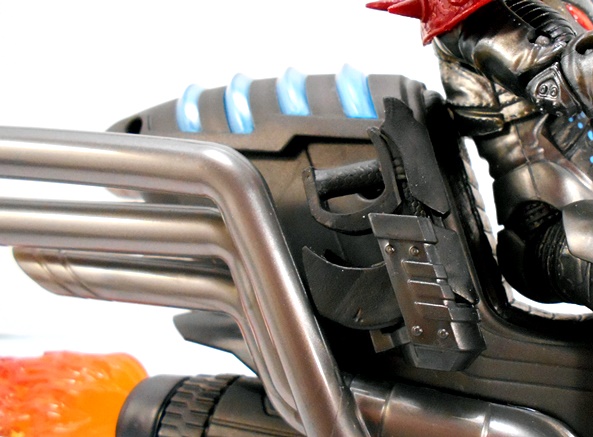 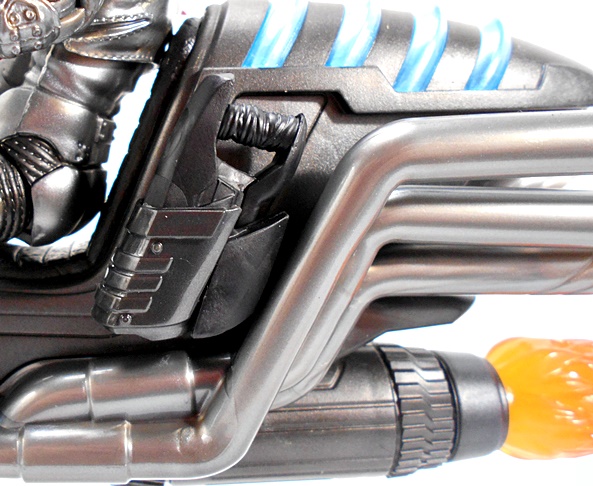 Apart from looking absolutely fantastic, there aren’t a whole lot of features on this Cosmic Ride. Although the sides do feature holsters for the two guns. I thought that was a cool bonus. 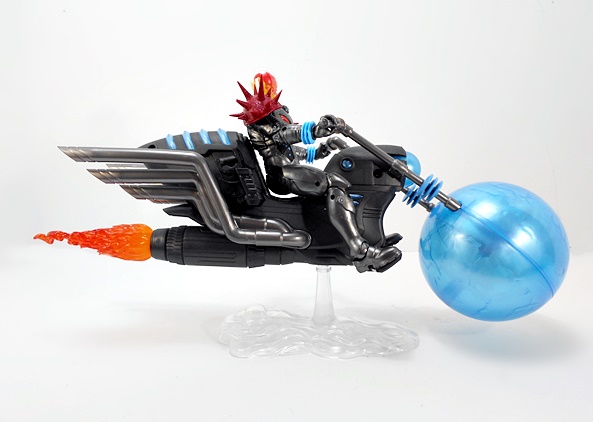 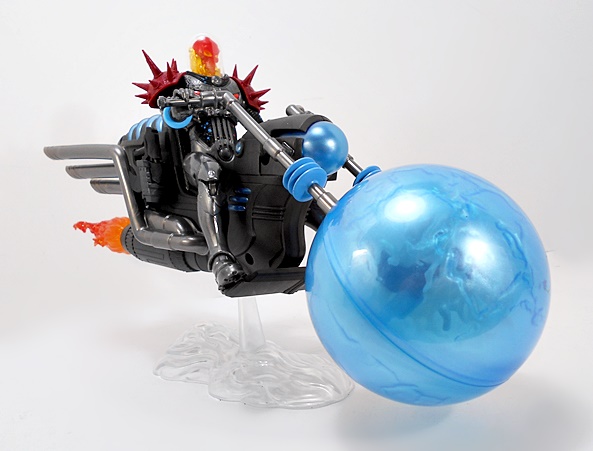 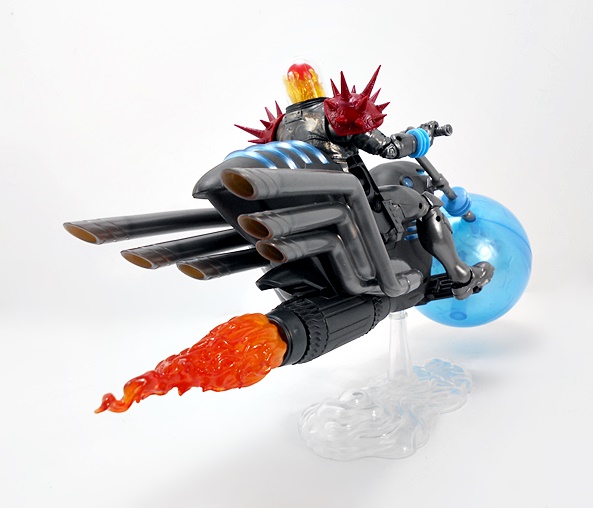 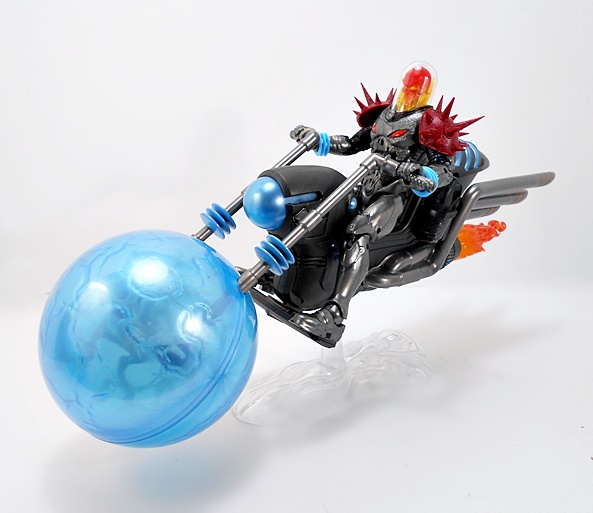 And while I had issues getting Doreen to ride her scooter properly, Frank Castle mounts this Cosmic Hog with absolute perfection. His grippy hands work perfectly for grasping the handlebars, that big gab between his legs lets him rest easy in the seat, and his boots stay put on the floorboards without even needing pegs to secure them. He looks so good and natural seated on his ride that I can’t imagine ever displaying him any other way. 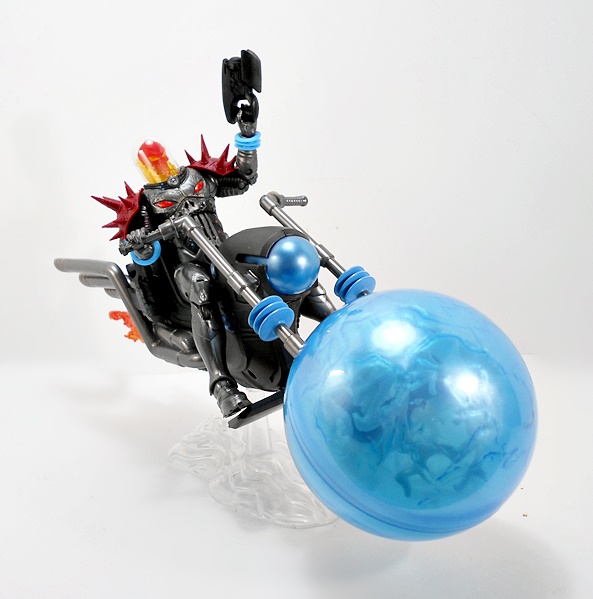 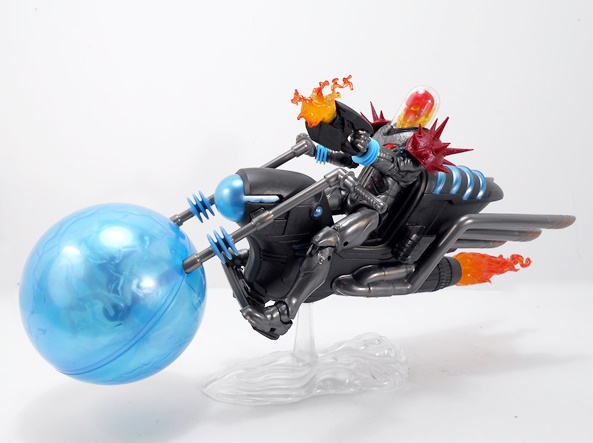 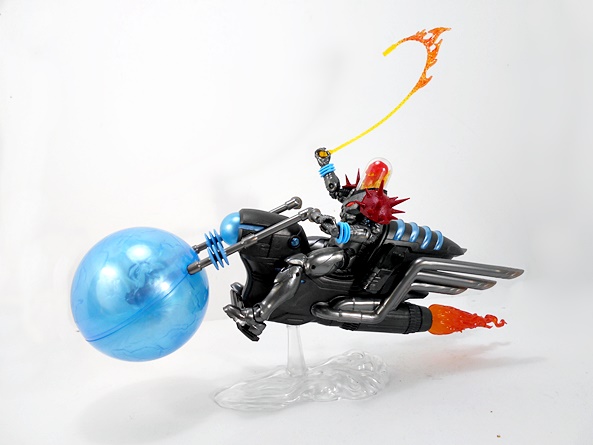 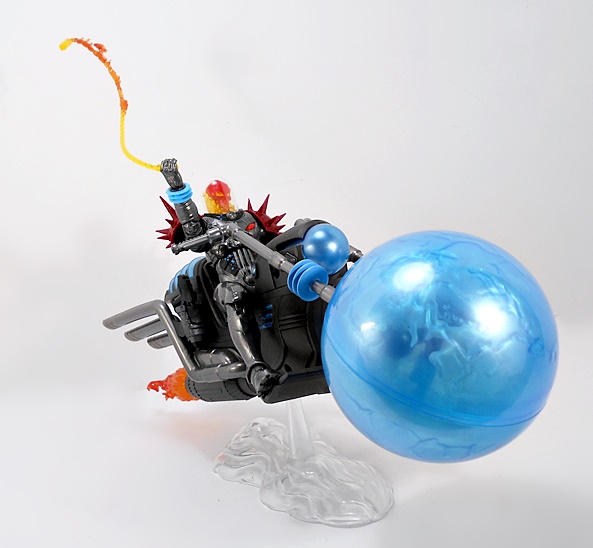 I was a little slow to warm up to the Deluxe Riders line. Hell, I still haven’t picked up the regular Ghost Rider and bike, but I’m damn glad I didn’t hesitate on this one. Everything about this set is just so fresh and original. The backstory is batshit crazy, the design of the bike is genius, and even Cosmic Ghost Rider’s crazy 90’s throwback design works so well when seated on it. What’s more with how big the bike is, this set actually feels like a damn bargain at forty bucks. Hasbro will never cease to amaze me with what they are willing to risk and put out when it comes to Marvel Legends. I truly believe that anything is possible, no character is too minor, no side story too crazy, and no toy is out of the question. And all I can say is keep magic like this coming, and I’ll keep buying. 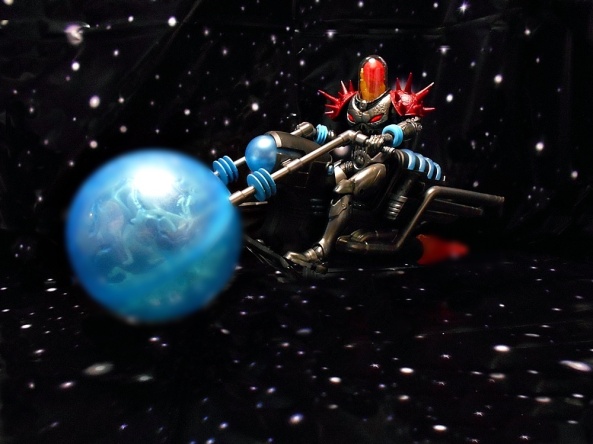 Don’t matter what planet they’re from.

All deserve to be punished!”