I rarely make New Year’s Resolutions, but I am going to do my best to make 2020 the year I (try really hard to) get caught up on my Sixth-Scale figure reviews. Sure I could say that about Mythic Legions or Marvel Legends, but this category actually seems doable. I have a few Hot Toys on my shelf still waiting their turn, a bunch on pre-order, but right now I’m most hopelessly behind on my TBLeague figures. A big part of the problem is that these are more affordable than Hot Toys and the sense of quality and value I get from these releases continues to be through the roof so I’ve been buying quite a few of them. And despite a common concern, I have yet to have any of the silicone bodies tear or break down on me so there’s been nothing to discourage me from keeping at it. At least not yet. And with that preamble out of the way, let’s check out Anck Su Namun, The Princess of Egypt!

TBLeague butters its bread by securing the largely overlooked (and conveniently inexpensive) licenses from a number of indie comic companies as well as the occasional concept figure. I would have guessed this one was a concept figure, if not for the ARH Comix. ARH published the wonderful Arhian The Headhuntress and one of my favorite comics of all time Arkhalla Queen of Vampires. But in this case I’ve never seen or heard about ARH publishing a comic with Anck. Was it her own book? Was she a supporting character in another? Even ARH’s website, which admittedly doesn’t seem to have been updated in over a year, holds no answers. But it doesn’t matter, I’m content calling her a concept version of a historical figure. Whatever the case, I happen to have a thing for Ancient Egypt and scantily clad ladies and this figure covers both of those areas of interest quite nicely. As always, the box is very high quality cardboard with a tri-fold lid that secures to the sides with magnets. The figure and accessories rest in a series of foam trays. The illustrations on the box let photos of the figure do the talking, and overall the presentation here never fails to impress me, especially considering the flimsy window boxes and sleeves that Hot Toys has been using lately. Happily there isn’t a lot of set up required here, so let’s get the Princess out of her sarcophagus and check her out! 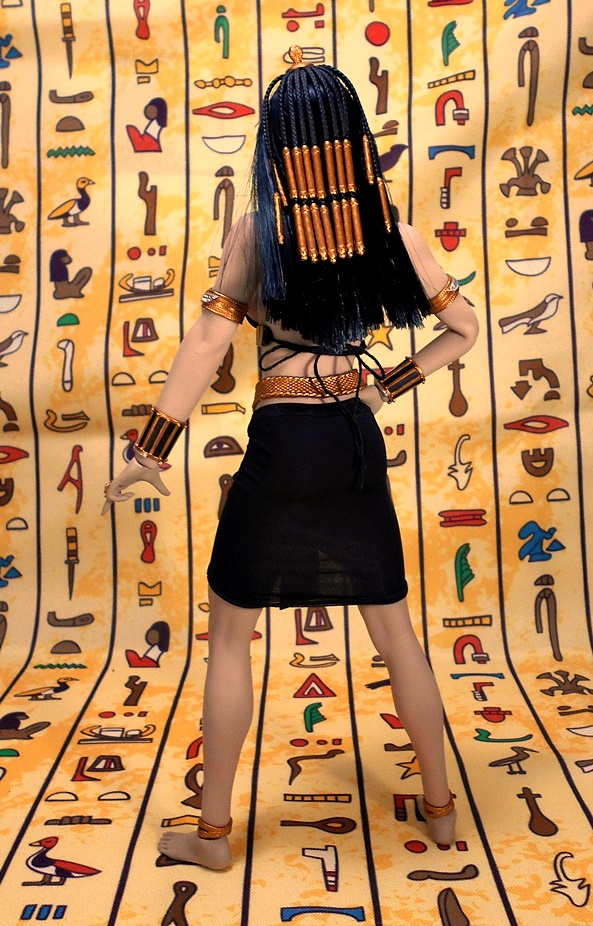 Now this is a Dynasty that I can get behind, and I sure don’t need any comic book tie-in to sell me on Anck because she’s a real knock out. Her outfit consists of a black cloth skirt, which is made from a light, stretchy material, and totally form fitting. There aren’t any slits up the sides so this skirt does tend to impede the range of motion in her hips. I can still get some fairly wide stances out of her, and she can sit just fine, but anything too extreme isn’t possible. On the upside, it really shows off her nice backside! Above the skirt she has a sculpted plastic belt and sash, all fashioned as one piece and painted gold with some black and silver trim. I’ve got to say the gold and silver paint they used on all of the costume pieces is so sumptuous! The belt itself has a weave pattern sculpted into it, while the sash has some raised hieroglyphs. There’s also a scarab disc in the center of her waist where the belt meets the sash. The sash hangs on her hips and stays put most of the time, but will occasionally ride up when I’m posing her. 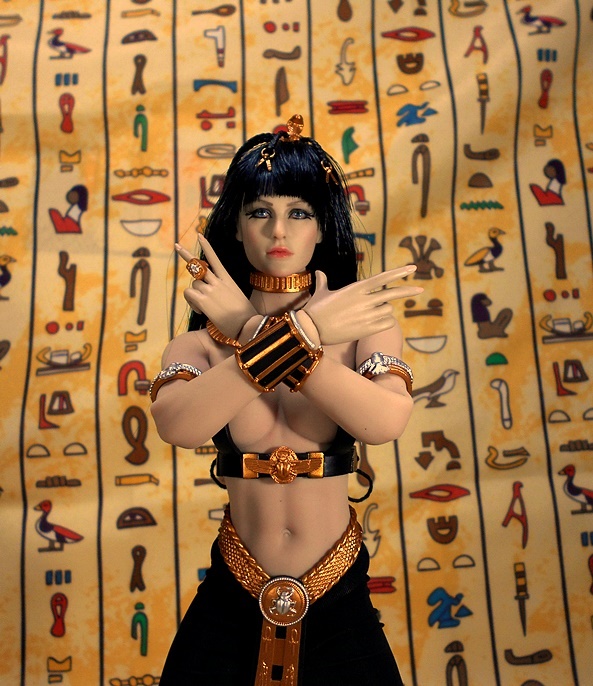 Traveling further up to her chest, I have absolutely no idea what to call this bra-rig-thing. It’s basically a black leather strap that goes under her chest with two other straps rising up with the Ancient Egyptian equivalent of pasties. This costume piece ties behind her back and it holds on amazingly well. In reality I can’t see this thing working, but here it’s almost like magic! The cross strap features a sculpted gold bird and scarab motif, while the pasties are sculpted to look like intricately detailed gold coins. Anck is also big on the accessorizing, and these points of flair include  golden anklets and wrist bracers, both sets of which are designed to conceal the seams on her wrists and ankles, two gold armbands with sculpted white birds, and she even has a removable ring on her left hand! Speaking of hands, she comes with a bunch of them, from gesturing hands to grippy ones designed to hold her weapons. She also comes with two pairs of feet, one set is flat for standing and the other with arches for when she’s sitting. 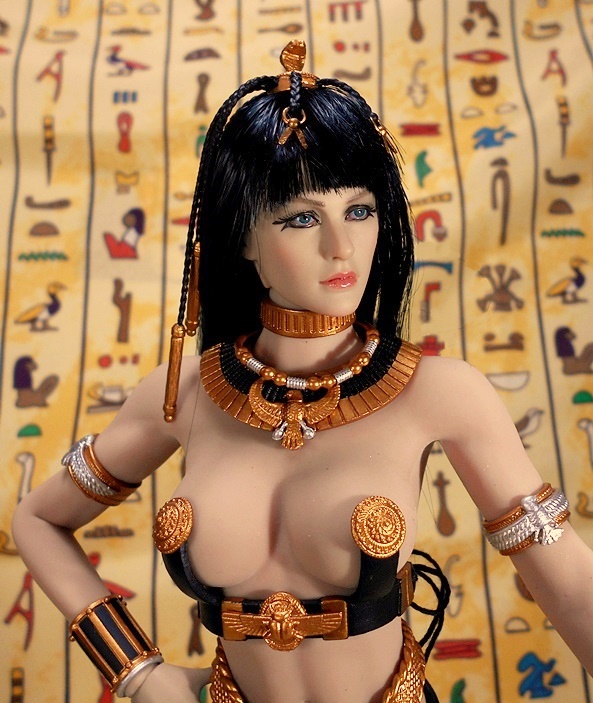 The portrait is very good and shows that TBLeauge is always working on upping their head-sculpts. The eyes are quite stunning with a nice level of realism to the paint and the Egyptian-style mascara is crisp and precise. The paint on the lips is also superb with just enough gloss to give them that slightly wet look. And still, the real showpiece here is her hair. She has a fairly typical coif of straight black hair, but layered on top of that is a cobra-headed headdress, which sports two braids coming down the front and ending in gold rings. Down the back is a full brace of braids all ending in golden rods. This ensemble is actually pegged straight into the top of the head and it looks fabulous! And like the rest of her body, Anck’s pretty neck is adorned with even more finery. She has a wide, segmented black and gold colar with a bird sculpted on the front. Above that she has a necklace of gold and silver beads, and above that she has a wide golden choker. 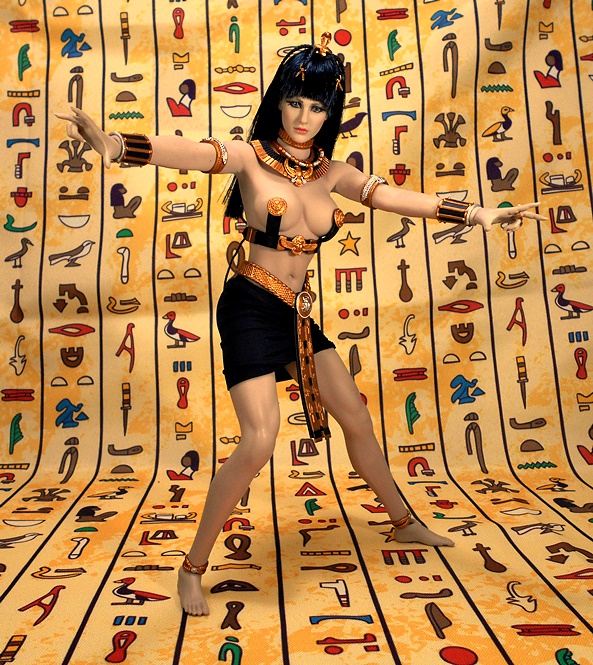 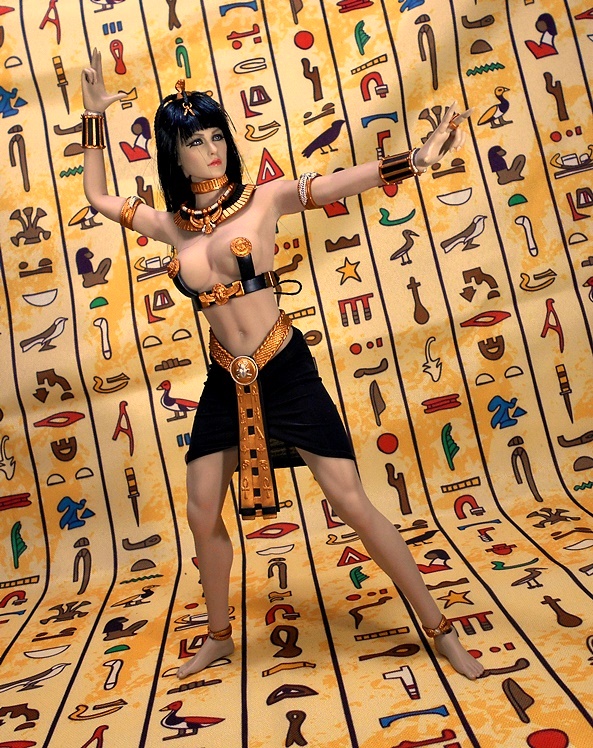 As always, the articulation on the Phicen Seamless Bodies goes above and beyond in replicating the movements of the human body. The silicone skin has a warm and even tone and feels eerily real, while the stainless steel skeleton beneath it offers up silky smooth movement and plenty of hidden surprises. TBLeague has started including instruction sheets with these figures showing you what the safe and acceptable movements are, and I find that they tend to be a little conservative in limiting what they allow. The truth is that if you’re careful these bodies are capable of a lot of extreme movements. On the flipside, it’s not a good idea to leave these figures in those kinds of poses for too long, so I tend to go with very traditional museum-style displays unless I’m planning on changing them up every couple of weeks or so. At the risk of jinxing myself, I’ve yet to have any of these bodies tear on me or degrade, and that’s with about 20 of them in my collection, the oldest being from several years ago. And with the body and costume covered, let’s move on to her accessories. 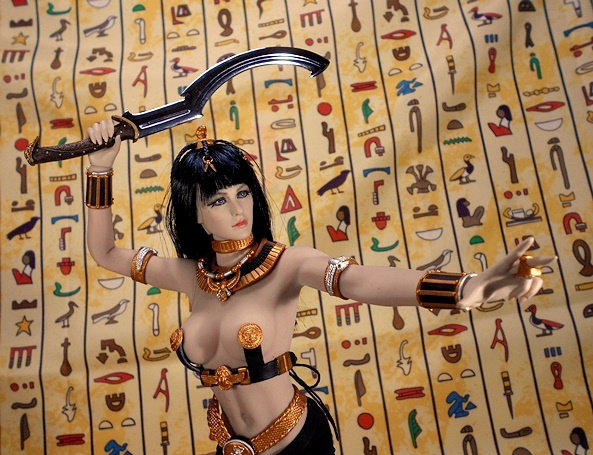 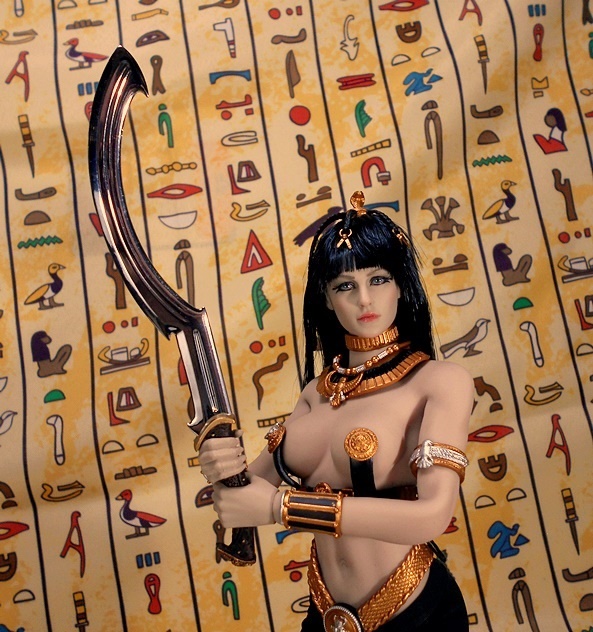 For starters, she comes with this wicked sickle-bladed sword. At first I thought it was going to be a repack of one that came with a previous release, but it’s completely new. The blade has a mirror finish and the sculpted grip features a gold painted guard and a scarab sculpted onto the pommel. She can comfortably wield it in either or both hands. 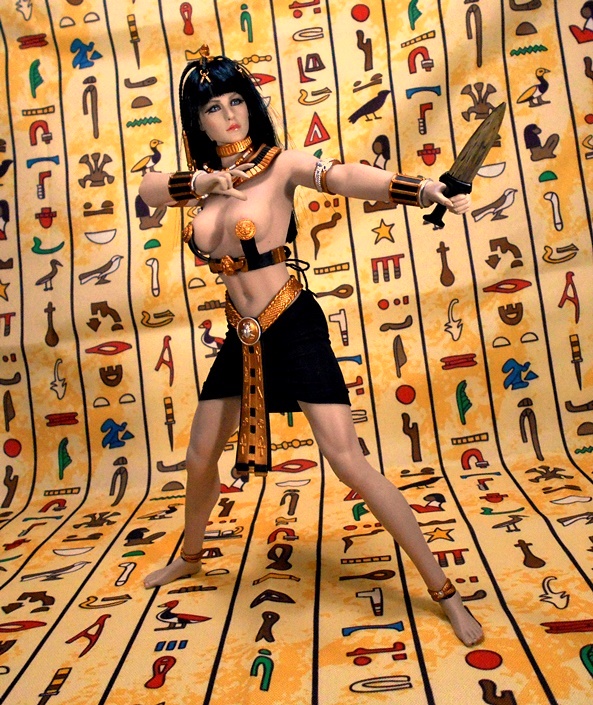 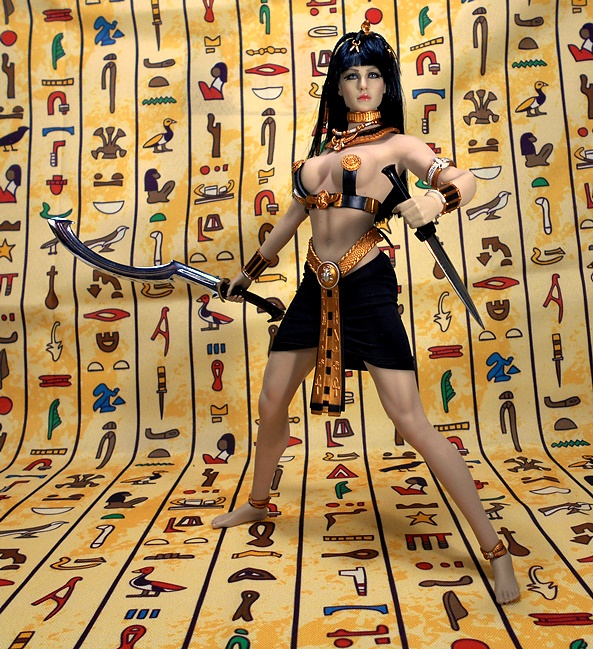 Next up, she has a dagger, which features a simple black grip and also a mirror finish on the blade. She doesn’t come with a sheath or scabbard for these blades, but the dagger looks pretty good tucked into her sash. I just have to remember to be careful tucking it in there because Phicen skin and sharp pointy things don’t usually get along too well.

And finally, Anck comes with a pair of Sai, which is a really weird pair of weapons to include with an Egyptian Princess, but she still looks bad ass when wielding them. Still, I doubt these are going to spend a lot of time out of the box. I’d rather go with the more-Egyptian themed weapons. And while that wraps up Anck’s weapons, we still have a display base and decorative piece to look at.

The display base is a raised circular platform sculpted to look like an ancient pillar. There are hieroglyphs sculpted into the sides and golden discs with raised scarabs encircling the base. It’s a fantastic looking piece and these always makes me wonder how TBLeague can throw in extras like this, while still keeping the costs well under $200. The only downside of these bases is that there’s no way to secure the figure, which makes me unlikely to ever display her standing on it for fear of her taking a shelf dive. I suppose you can use a stand and put it on top of it, but that tends to look unsightly. She does, however, look pretty fine sitting on it. 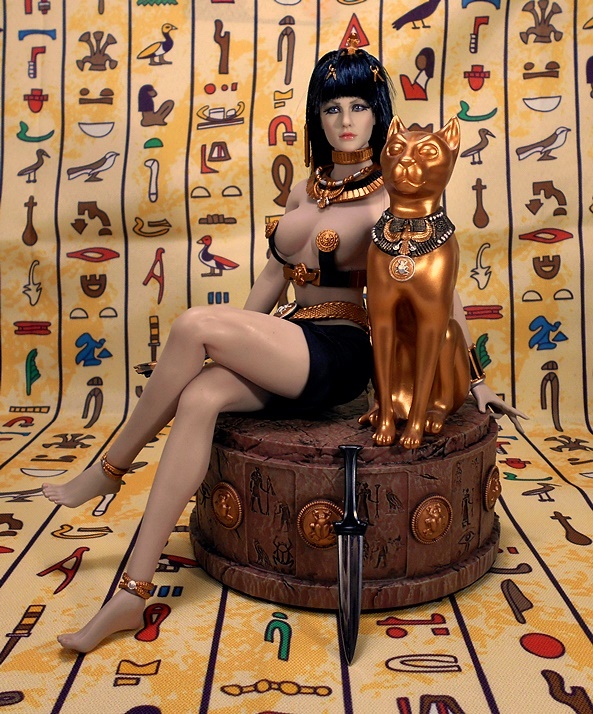 And finally Anck comes with a golden cat sculpture, which is both beautiful and quite hefty. Again, how do they pack this much stuff in while not approaching the prices of many other Sixth-Scale figures out there? I don’t know, but I’m not about to question it. 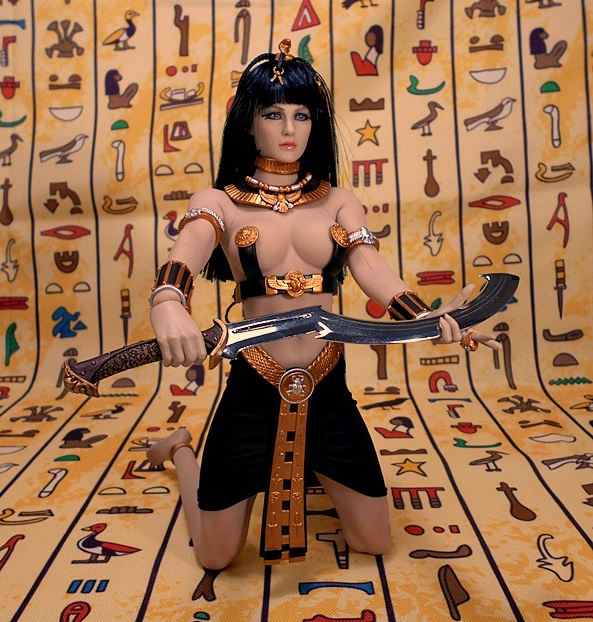 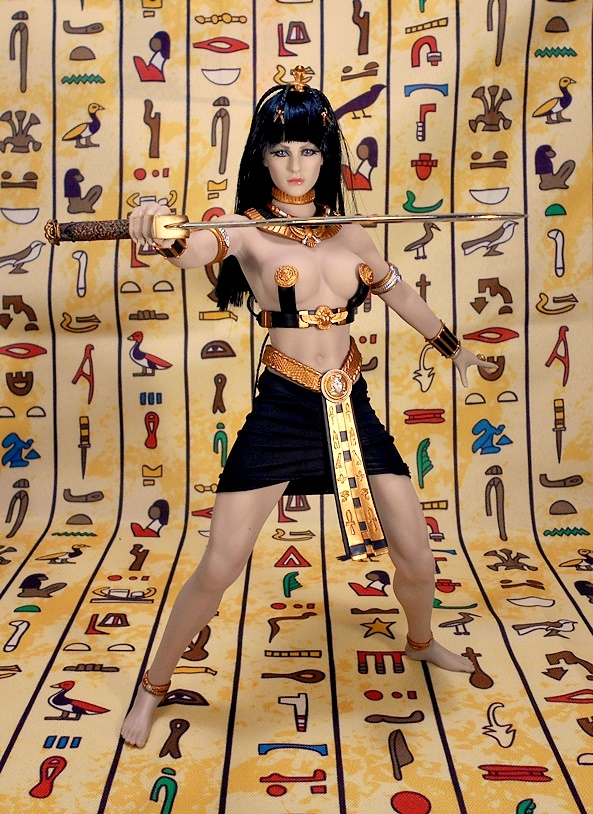 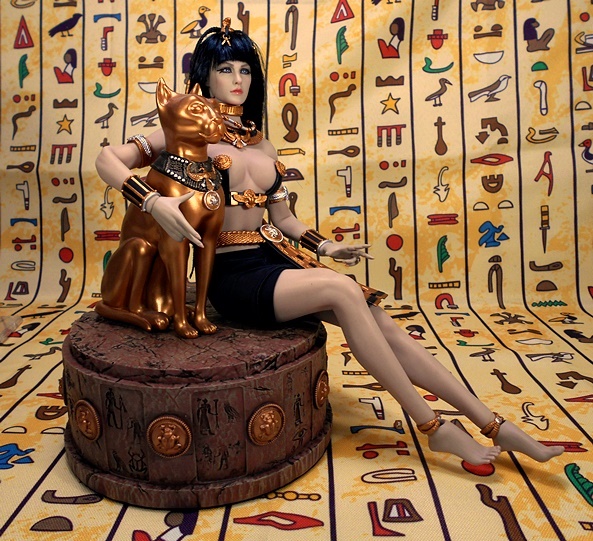 Anck Su Namun is yet another fantastic figure from TBLeague. The detail and craftsmanship on the costume and accessories just goes to show how much these guys care about producing visually stunning figures that pair so well with the Phicen bodies. What’s more she’s been so much fun to play around with. When I first started dabbling around with this line, I was so apprehensive about handling them, but the more experience I get, the more I realize that these figures have a lot to offer so long as you show a modicum of care when handling them. The Egyptian Princess set me back about $160 and while she’s still hanging around at some retailers, she’s also starting to creep up in price at places like Ebay. I’m happy to add her to my collection, and I was even happier to see that TBLeague followed her up with a Cleopatra figure. Hopefully I’ll get a chance to show her off here soon.