My work schedule continues to be crazy, folks, and I have Easter to thank for me chipping away a little time to get this week’s Marvel Monday posted on schedule. Now, I had originally planned to look at both Boom-Boom and the Wendigo Build-A-Figure today, but I had to scale back on that because of a time crunch. I’m hoping to get back to Wendigo before the end of the week, but we’ll see how that goes. In the meantime, It’s always exciting to be putting another wave behind me, and while Boom-Boom happens to be the last figure in this assortment that I’m opening, don’t read anything into that. The Fallen Angels series hit the spinner racks at a perfect time for me, (I was 15!) and I ate that shit up and was quite smitten with Tabitha. Naturally, I’m happy to be getting her in my Legends collection. 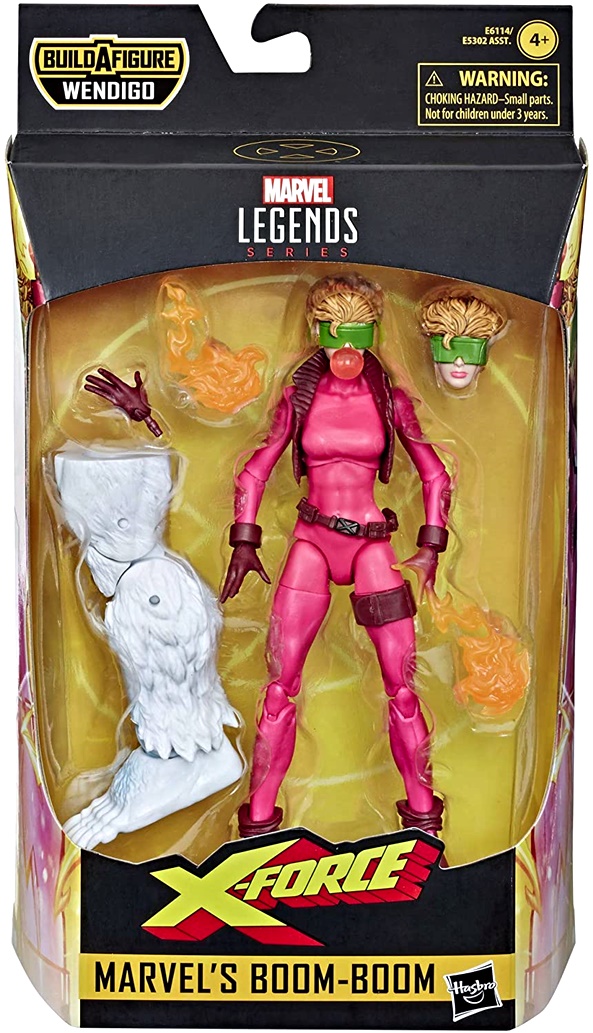 Here she is in the package, offering up the final piece I need to build my Wendigo, and sporting that lovely X-Force logo. I’m happy with the look they went with, although I’d be equally happy to get a different costume as a future release. Hey, with how prolific this line has been, anything is possible! Let’s blast her out of there and take a look. OK, Boomer? 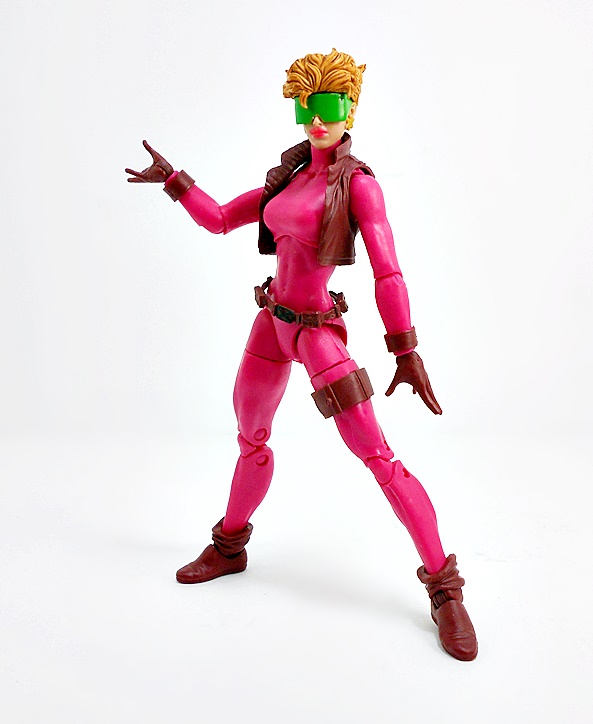 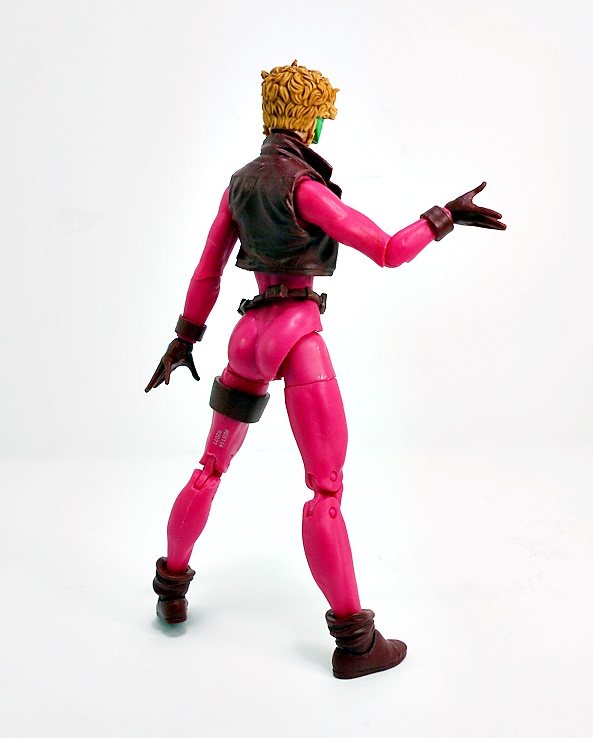 Boom-Boom is one of those figures that gets by with a colored buck and some added pieces. And while that might be an incentive for Hasbro to cheap out, this is another example of them going above and beyond. The buck is cast in mauve plastic to depict her featureless bodysuit and brown bits are added to complete the costume. Mauve and brown are not two colors I would think to put together, but they kind of work here. That’s why I leave character design to the pros.

The hands and feet are painted brown and pieces are added to the wrists and ankles to make them look like boots and gloves and it works great. A wide brown belt wraps around her left thigh, and while it is held on by friction, mine is happily stuck firmly in place. A thin brown belt hangs around her waist, speckled with some tiny pouches, and advertising the X-logo on the buckle. Finally, she has a brown half-vest with a segmented collar.

I’m not going to run down all the articulation, because there’s simply nothing new here. If you have some Legends ladies in your collection you should know what to expect. I will toss in my obligatory griping about the rotating hinges in the elbows. Those hinges lock in at 90-degrees of movement and that feels so damn limiting, especially when most of the Legends dudes get the double-hinged elbow treatment.

Boom-Boom features two heads and both sculpts are excellent. She has her large green visor covering her eyes and leaving only her nose and brightly painted lips visible. The sculpting for her curly hair is fantastic and highly detailed. There’s even a wayward curl or two falling over her visor. She also sports a nice pair of sculpted her some star-shaped earrings. If anything lets this portrait down a bit it’s the paint application on her lips. It looks like she applied her lipstick in a moving car… driving through a minefield… in the dark. 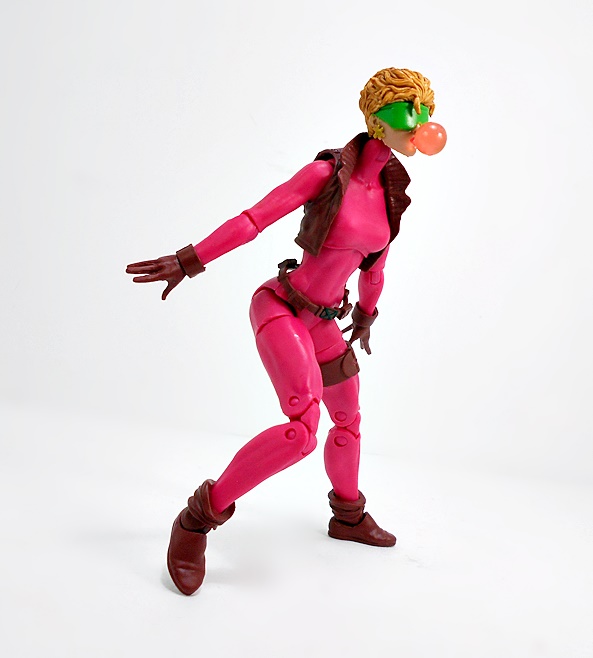 Tabitha joins the Jubilee School of Bubble Blowers, as her second head comes with a blown bubblegum bubble. The rest of the head sculpt is pretty much identical, but it’s nice to see that Hasbro was able to roll out that neat effect again so soon. This head has a few minor seam and mold flashing issues, which aren’t a big deal, but I mention it because it seems to be happening more and more lately. 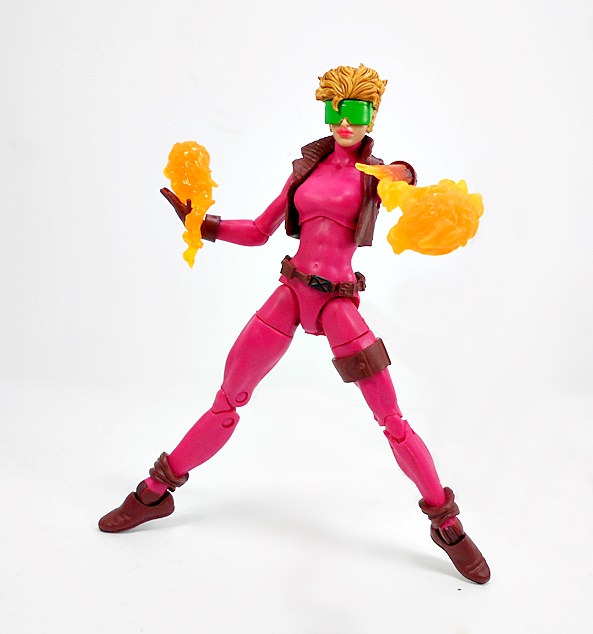 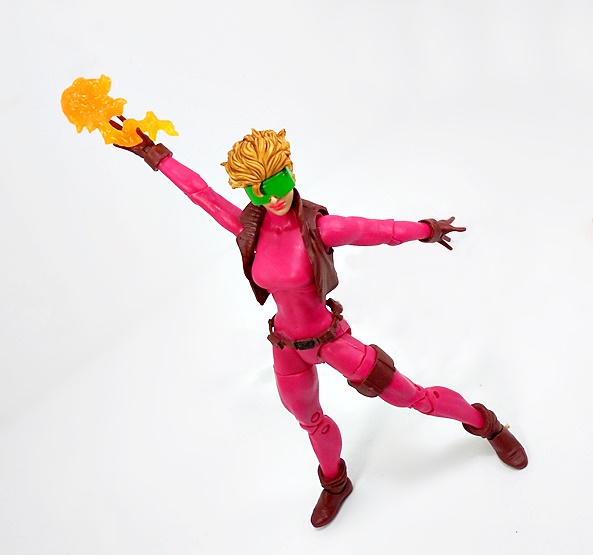 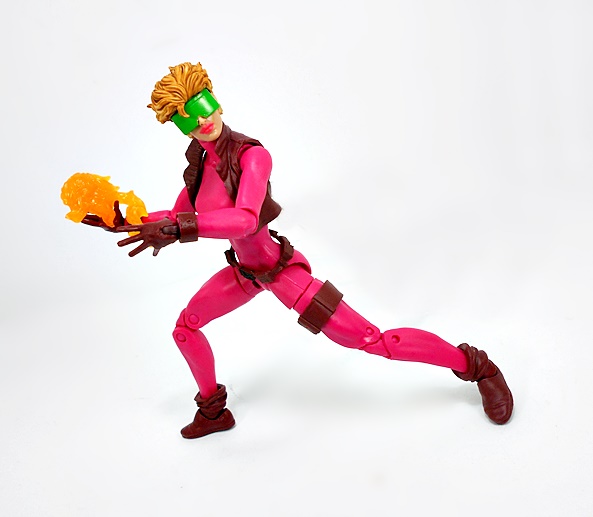 Of course, Boom-Boom sports one of the more useful mutant powers out there, the ability to create explosions, and we get a couple of effect parts to help communicate that. One is just a flaming ball of combustion, which she can hold in either hand. The other is a replacement left hand with the fireball effect built in. Both look great and I’ve had some fun fooling around with them. 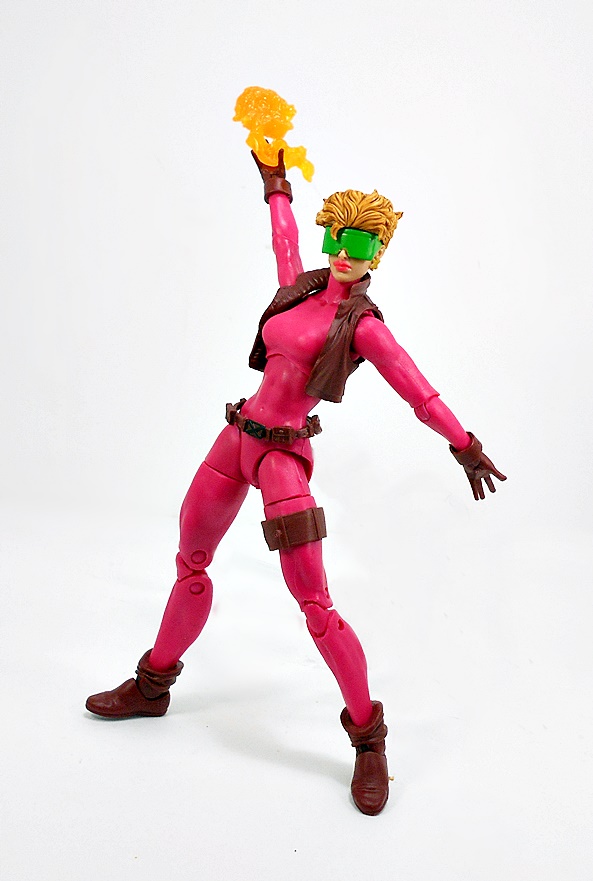 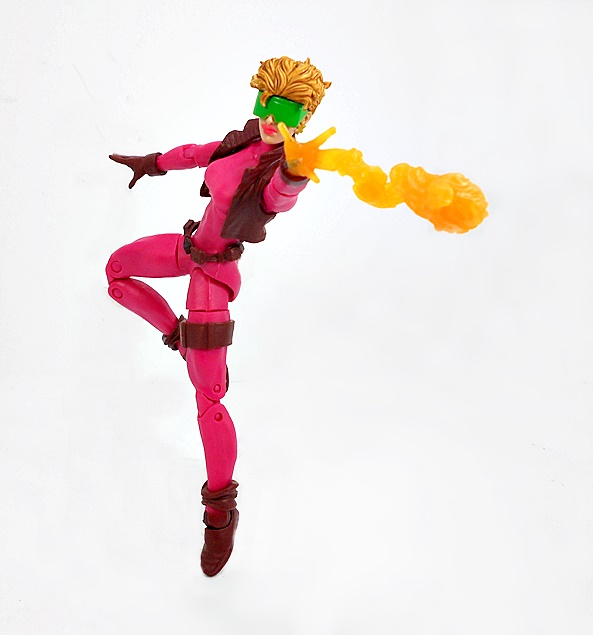 I’m not really tuned into the Marvel fanbase these days, so I’m not sure how much demand there was for Boom-Boom here, but I suspect most old-timers like me are going to be happy to have her. This is a release that once again shows how committed Hasbro is to the depth of character selection here and I’ll be honest, I can never have too many Mutants. Are there still characters that should probably be hitting the shelves before Boom-Boom? Yeah, most definitely, but I have no doubt Hasbro will get to everyone eventually. I’ll be back at some point this week to check out the Wendigo Build-A-Figure!