How about that comic industry, eh folks? Woof! With the Covid Virus closing comic shops, Diamond shutting down distribution indefinitely, and a lot of Marvel’s creators at war with their own customers on social media (well that last bit is nothing new), I’m not sure how this is going to come out. But that’s why I’m glad to have companies like Zenescope. Sure I used to buy their stuff at my (not so) Local Comic Shop, but these days I get most of it online and direct from the company. Same thing with Alterna, and I’d love to see other publishers work up similar online stores. At least it seems to me to be the way the industry is going. The only downside of smaller comic companies like Zenescope is the lack of merchandise. I like to be able to buy action figures and statues of my funny book stars and there hasn’t been a whole lot of that for Zenescope. Still, there was a temporary partnership with Phicen to make some Sixth-Scale figures, and now we’re getting the second in a series of Kickstarted Bishoujo-style statues. The first one was Sela Mathers, this time it’s Robyn Locksley! Next to her pal Liesel Van Helsing, Robyn has been my favorite character in Zenescope’s stable. She’s had some great limited series and even had an ongoing book for a while. From the golden early days of Pat Shand to the newer stuff by Chuck Dixon and Ben Meares her funny books seldom disappoint, and I was thrilled to see she was the subject of this new Bishoujo. 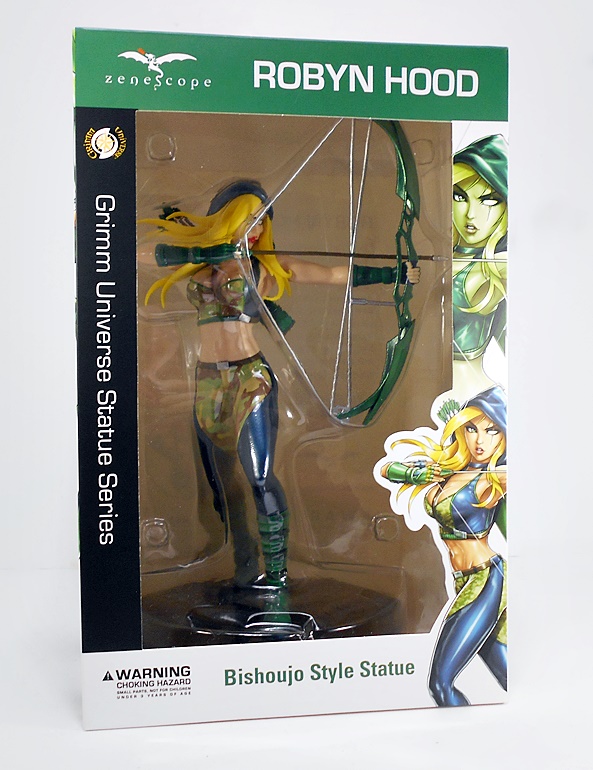 The box is similar to the Sela statue and obviously inspired by Kotobukiya’s Bishoujo line. The big difference is that there’s only one window here, on the front panel, so not as much light gets in to show off the goods. But chances are you aren’t eyeing this up in a store. And on the other hand, less windows made room for more character art, which we get on the front and side panels. The Grimm Universe logo is on the top panel, and the back panel gives us a blurb about Robyn as well as a teaser that Liesel is coming up next. Everything is collector friendly and there’s no assembly required. The statue is roughly 1/7th scale, which puts her right in line with Koto’s ladies and it’s cast in a similar sort of PVC plastic.

Out of the box, Robyn is looking mighty snappy and the pose really captures the character beautifully. Robyn is depicted in mid stride with her trusty compound bow drawn, as she targets an unseen adversary, probably one of The Cabal’s goons. The composition strikes a perfect balance between action and a measured pose and it offers a few choice angles for display.

The attention to detail in her costume is well executed and nearly all the details are part of the sculpt, including the reinforced bands on her high boots, the lines separating the leather and camouflage of her pants and top, and even the finger-less gloves. Even the cross strap that secures her quiver is sculpted separately from the figure. The quiver is a simple box with several arrows peeking out the top. I’ve always loved the design of Robyn’s bow and it’s recreated quite nicely here with all the sexy curves and complex network of pulleys and cables. If I had one nitpick, I wish they had used actual string for the bow because the plastic cables look rather chunky, especially in relation to the arrow shaft. Still, I could see why they wouldn’t want to go that way and if nothing else, making them plastic will certainly mean more durability.

The portrait is pretty faithful to the Bishoujo aesthetic with maybe a little bit of cupie doll thrown in. Robyn sports one green eye and her trademark scar is shown transecting her pupil-less left eye. It would have been cool if they did some kind of foil or gold leaf paint for her mystic eye, even if it was offered as a more limited exclusive. Oooh, they should have done that on the B&W one. That would have looked pretty rad. Either way, I think they did a great job on her facial details and I really dig the way her hair sculpt came out. Sela had some minor issues with mold flashing on the hair, but I’m not seeing any of that here. Of course her hair is capped off with her hood drawn up over her head, but not pulled so far forward that it obscures her face. 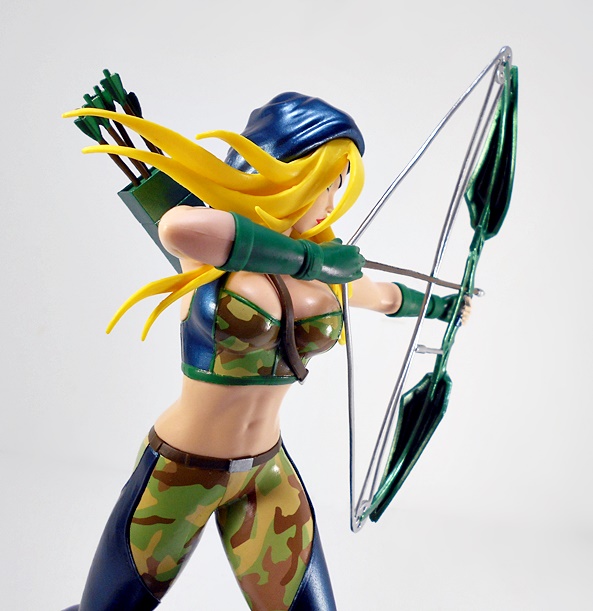 The paint and coloring here certainly gets the job done. I dig the use of metallic paint for the blue leather parts of her costume and the emerald green finish on the bow and quiver is quite striking. The camo portions of her outfit are painted neatly, although I would have preferred these had a matte finish. Add in the bright yellow coloring of the hair and ruby red lips, and you’ve got a deco that pops quite nicely. The skin tone isn’t as warm and soft as I’m used to seeing in Koto’s pieces, but it’s serviceable. I’ll also note that the applications are all crisp, with really no slop or uneven lines worth noting.

As with the Sela statue, the base here is just a black disk and I’m fine with that. It’s serviceable, but there’s nothing really else to say about it. 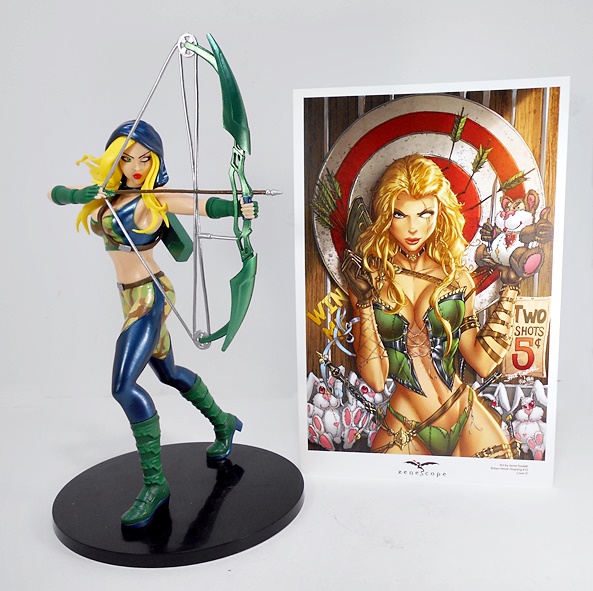 There were a whole slew of Add Ons and Stretch Goals that came as part of the Kickstarter. The project hit $92,000 so that means a lot of extra freebies were unlocked and I added some extra money to my pledge to get some other goodies. First off are these two beautiful art prints by two personal favorites of mine: Paul Green and Jamie Tyndall. I can never get enough of these two artists, and I’ll confess to having a ridiculous number of Tyndall’s framed art scattered through my home, a lot of which is signed. 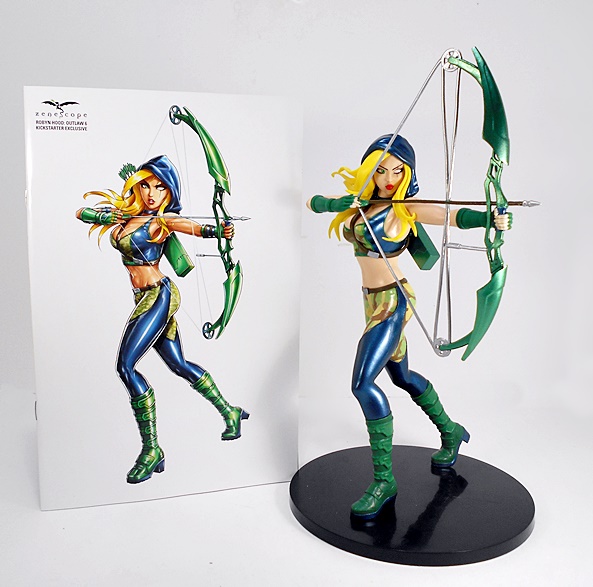 Next up, there were three Exclusive comic covers of Robyn Hood: Outlaw #6 in my box. The first is by Jason Cardy and it’s the art on which the statue is based. The second is a gorgeous piece of work by another one of my favs, Mike Krome, which was limited to 200 copies. Finally, the third is the line drawing of the same piece of art with an added background. I believe one of these was an Add On and the other two were Stretch Goals. 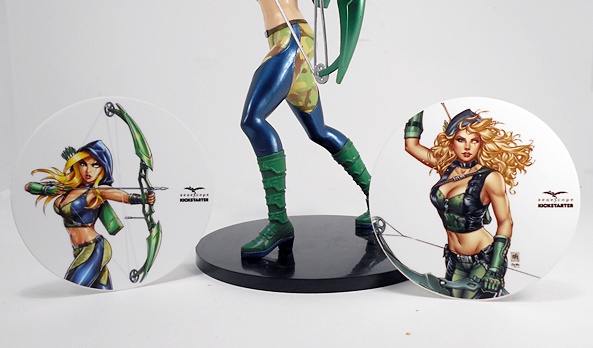 There were also two stickers in the box, based on the Jason Cardy and Mike Krome art from the previously mentioned comic covers. These were each Stretch Goal bonuses.

And finally, I got four metal cards. I adore these things, but I don’t buy a lot of them individually. I do, however accumulate them as bonuses or incentives. These are all beautiful, but I have to call particular attention to the one based off of Billy Tucci’s cover of Robyn Hood #1. I also have a CGC graded copy of that comic hanging on my wall.

The Kickstarter was originally scheduled to deliver in September of last year, so yeah… things ran about eight months late, as my box just arrived last week. But after backing my share of Kickstarters, I’ve come to expect that. And it’s easy to overlook delays when such a wonderful box of joy ultimately arrives on my doorstep. I’ll say the same thing I said when I reviewed the Sela statue… these are not in the same league as Koto’s statues, but there’s no shame in that. Koto’s work is top-tier and they’ve been doing it forever. And with that said, I’m quite pleased with the way Robyn came out. I got mine with Early Bird pricing for $70 and that’s more than fair. And I’m obviously not alone in that assessment, because this project was funded in under four hours. It makes me happy to know that with successes like that, the line will continue, and I anxiously await the campaign for Liesel Van Helsing!