I’m likely going to start knocking off another wave of Legends from my backlog next week. In the meantime, I got the two GamerVerse figures from the Demogoblin Wave in the mail a few days back and they were within arm’s reach so I decided to have a look at one of those today. Let’s go ahead and do the Mark III Spider-Armor! 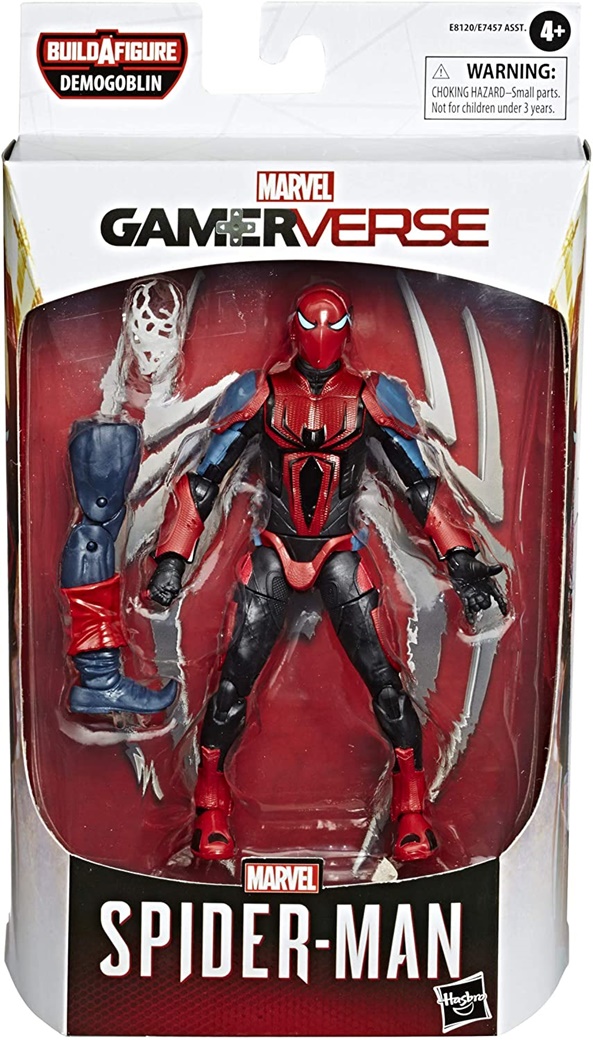 I’m assuming these are based on the PS4 Spider-Man game? Alas, my copy is still sealed on my shelf. I was pretty excited to play it at one point but then I watched my nephew playing an agonizing stretch as MJ in a stealth level and it was like getting doused in freezing water. Truth be told, if I was on lock-down like everyone else, I would probably have played it already, but all I got is loaded up with more work hours out of this whole pandemic mess. Ah well, I’m sure I’ll get to it eventually. I do know the game had a ton of unlockable suits because Spider-Man sure is known for his diverse catalog of costumes. Wait, what? Hey, whatever it takes to sell action figures, right? 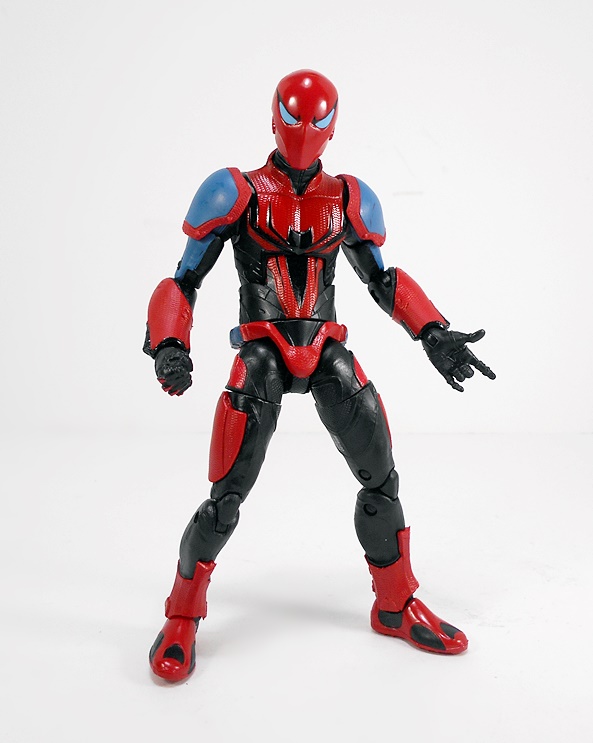 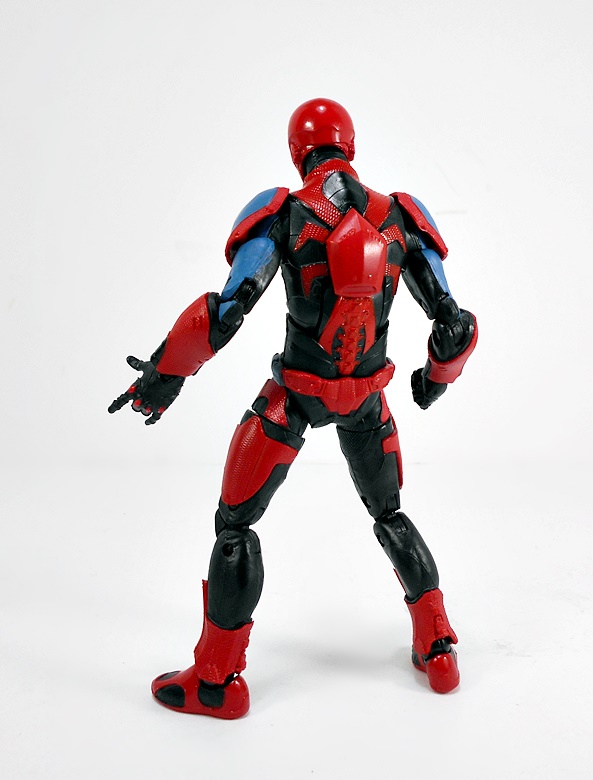 Because Spider-Man suits are just like Stark Armor now? I guess that ties in with the MCU. Sorta. Anywho, this is indeed an armored suit and all things considered, it’s a pretty damn cool looking figure. The Mark III Spider-Armor preserves a bit of traditional underlying Spidey suit and just adds some armored bits to it. I dig the texture in the red parts, particularly on the chest and arm bracers. The bracers look like they have two web-shooters on each one and the tiny red diamonds on the knuckles look great. Spider-Man comes with his right hand sculpted into a fist and a thwippy left hand. 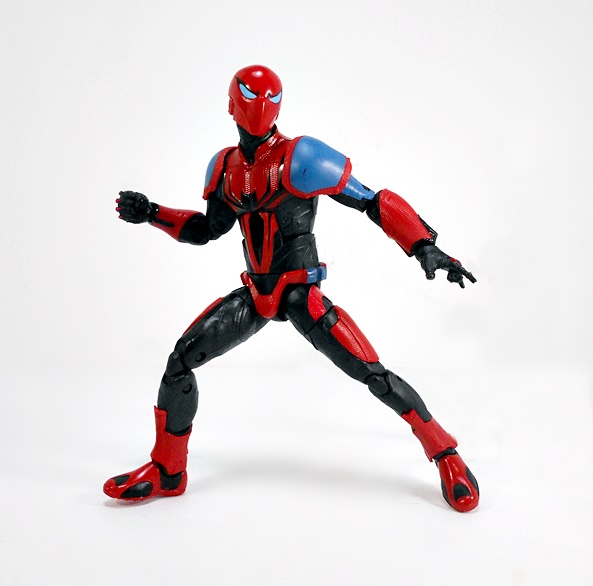 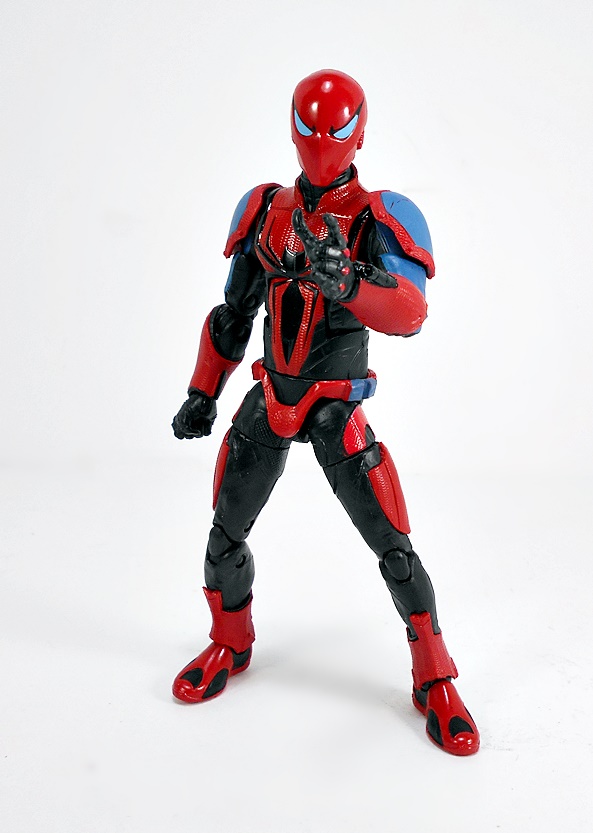 There are some subtle panel lines in the black areas, which give it an MCU vibe. The large shoulder pauldrons are an interesting choice, and I’m not sure I like the blue there and on the biceps. I feel like they should have gone either all red and black or all blue and black. Plus, the blue paint on mine has some scratches, which don’t look all that great. I do, however, think the spider emblem on the chest looks fabulous. 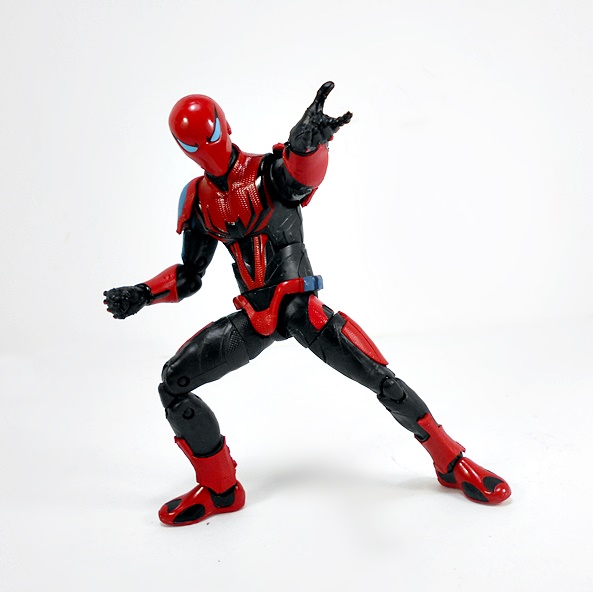 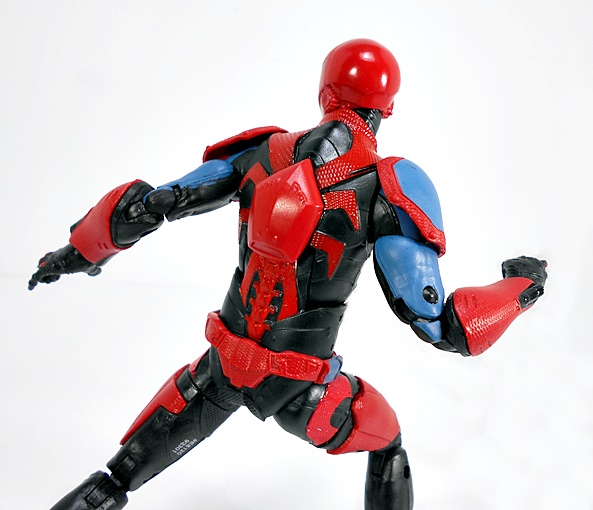 From the back, the Spider-Armor features a partial segmented spine, like we sometimes see in the Stark armors. He also has a little backpack, which looks like a jetpack? That’s weird. Maybe it’s also used for launching Spider-Drones. 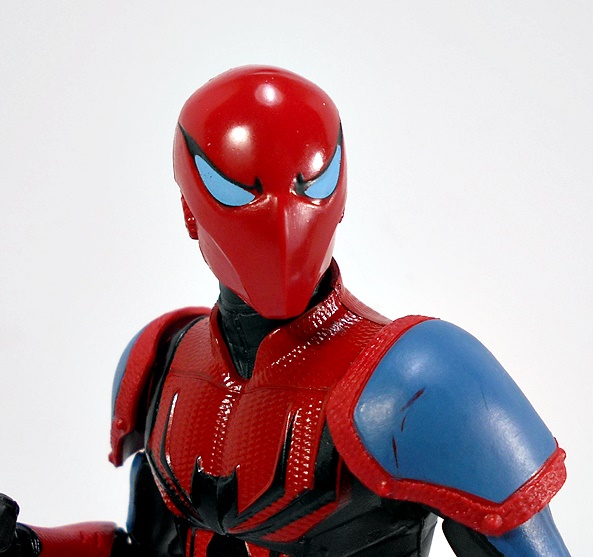 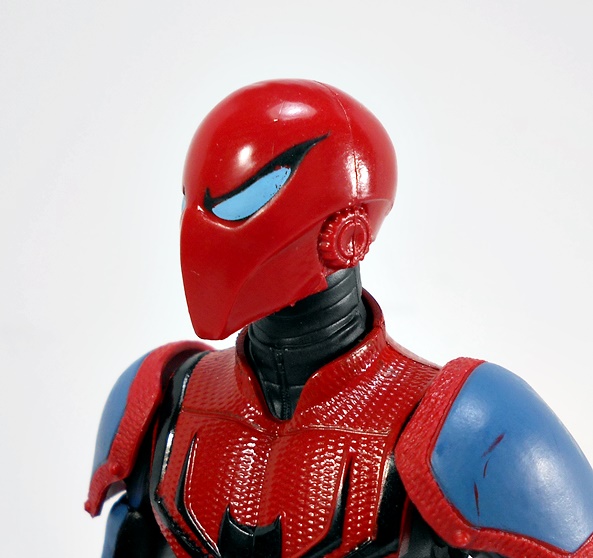 The head is the most Stark-like feature of the whole suit. It’s smooth, with gears for neck bolts and the neck is segmented. It lacks the usual Stark armor mouth, but you do get a pair of stylized eyes, which look pretty bad-ass. 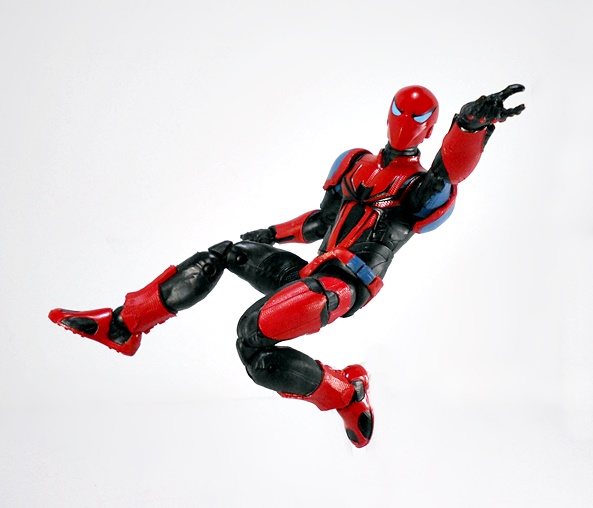 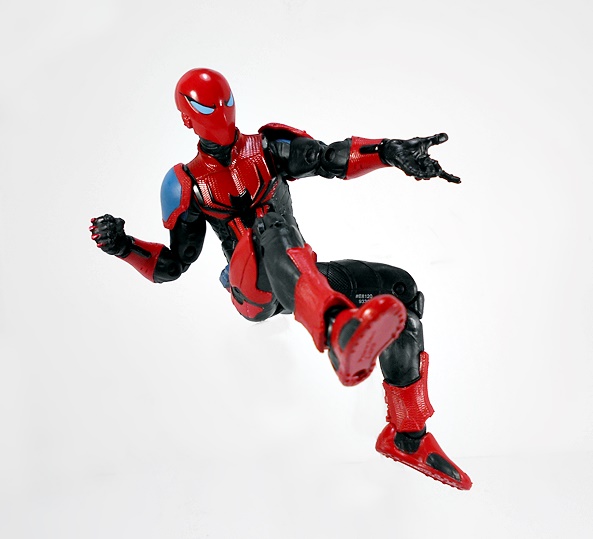 The articulation is standard stuff, meaning he’s very poseable. We don’t get the shoulder crunches we usually see in the regular Spider-Man figures, but I guess that armor has to limit agility, right? Instead, the arms get by with rotating hinges in the shoulders and wrists, swivels in the biceps, and double-hinges in the elbows. The shoulder armor will overlap the shoulders to allow for some mobility there. The legs have ball joints in the hips, double-hinges in the knees, and swivels in the thighs. The ankles have both hinges and lateral rockers. There’s a waist swivel, an ab-crunch hinge under the chest, and the neck is both hinged and ball jointed. 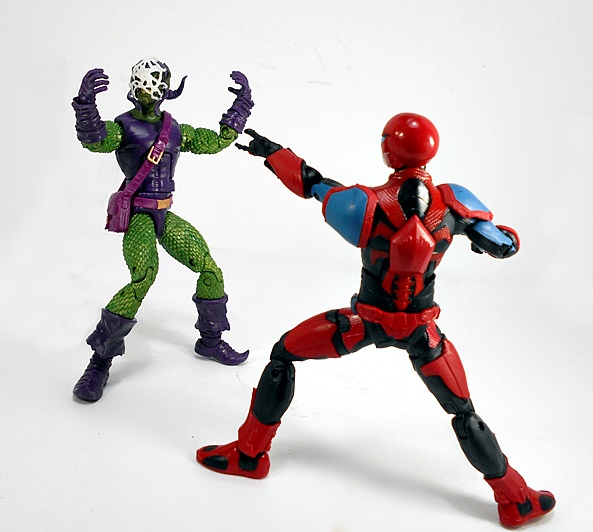 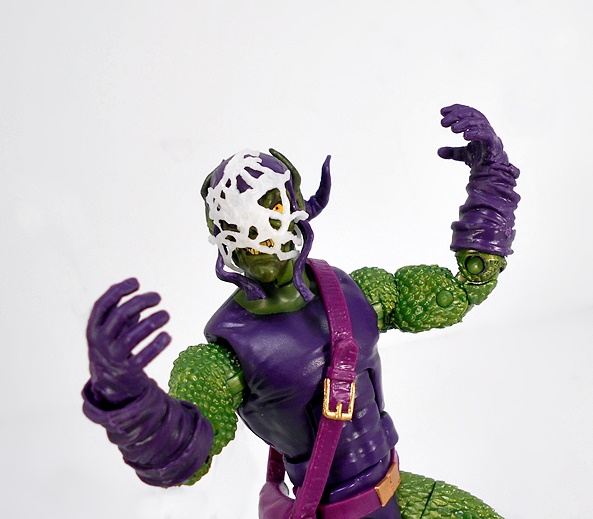 There are no extra hands included, but hey… Web effect! Oh, long I’ve been asking Hasbro to start doing web effects! It seems like such a no-brainer! This one is meant to cover an opponent’s face and it fits quite well. 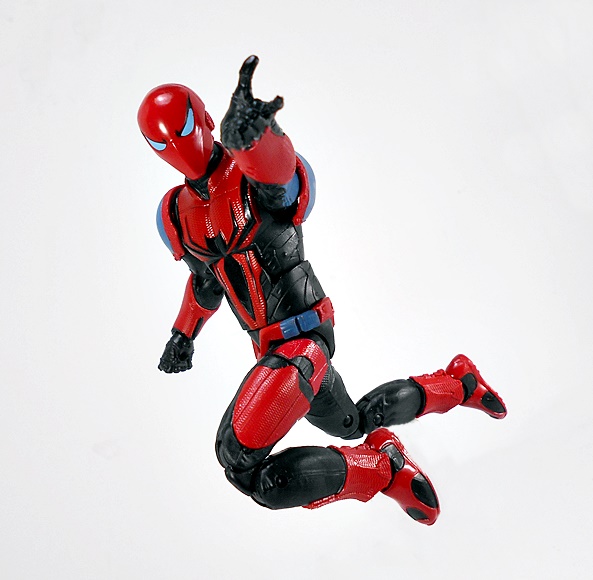 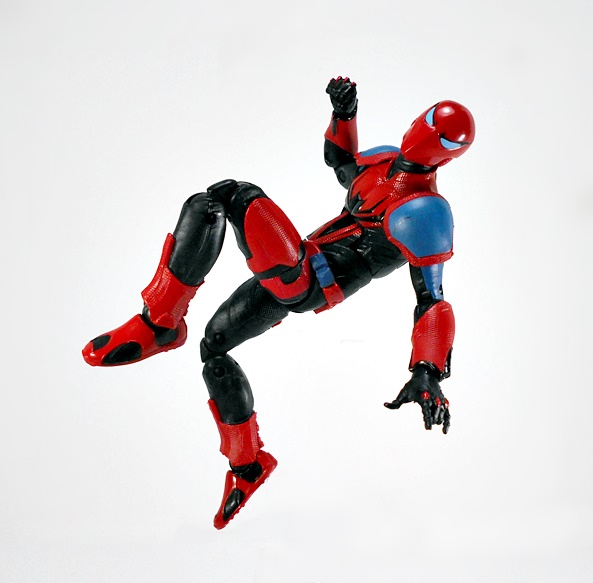 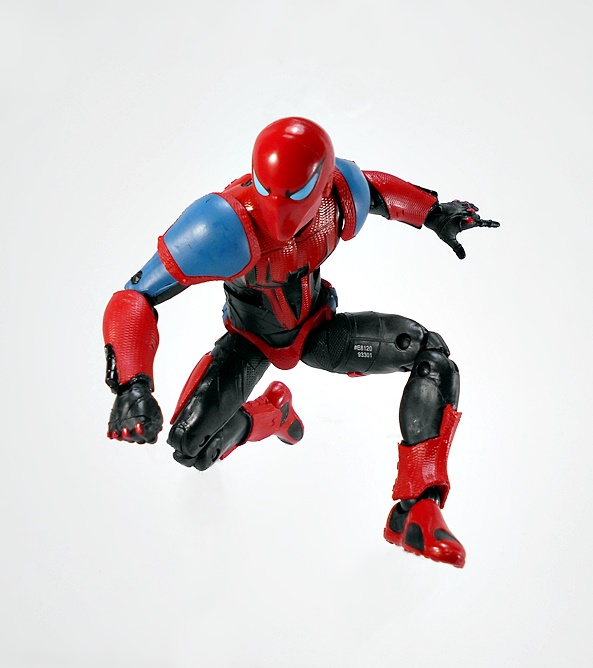 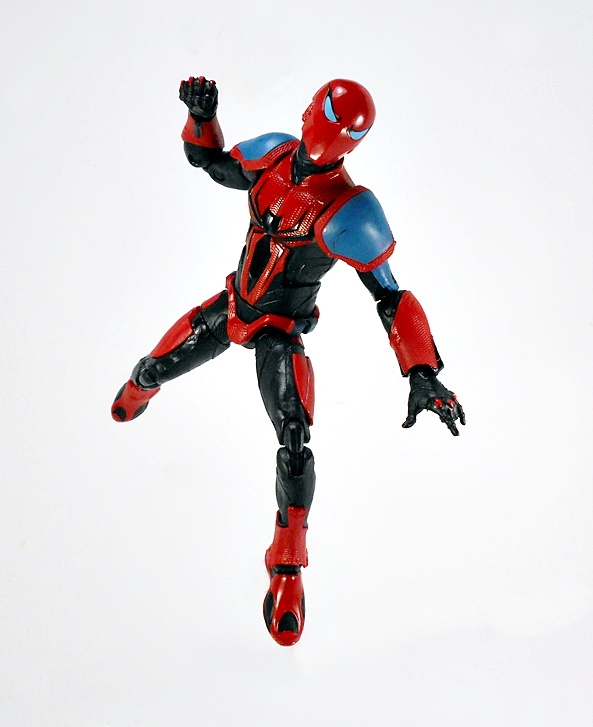 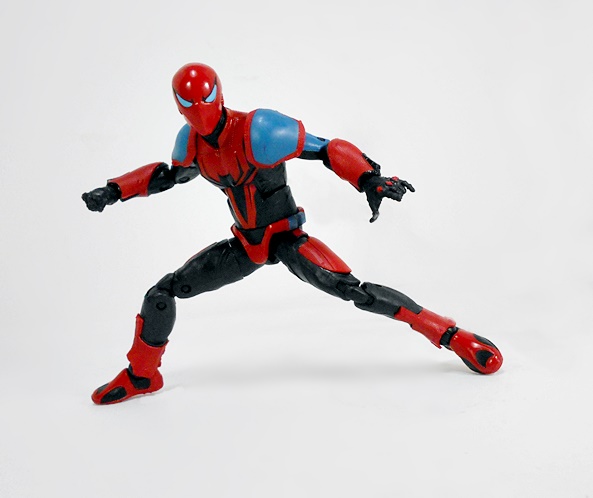 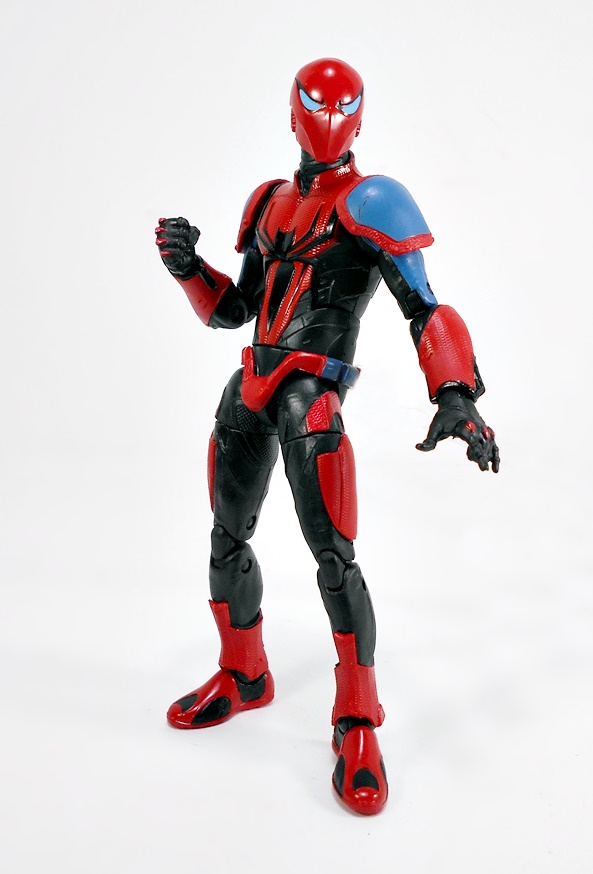 I was originally going to pass on this figure, as I wasn’t too keen on the concept, and I could probably live without building the Demogoblin. Luckily, it turned up for dirt cheap online and now that he’s in hand, I’m actually surprised how much I dig this figure. I’m still not a fan of taking the whole Stark Spidey suit thing to the extreme. We don’t need a Spider-Man House Party Protocol. But  as a concept figure I think this works great. Hell, I guess it even works as an extrapolation of the MCU Spider-Man. Either way, I’ll admit that it won me over in the end. Next week I’ll see if the same is true for the Velocity Suit Spider-Man.