Well, this feels good. Not only did I make it back for three reviews in one week, it’s the second week in a row that I achieved this time management miracle! Plus, I’m tossing out a little homage to the old DC Friday content I used to churn out on a regular basis. It’s been a ball buster of a week and I felt like a little statue therapy today, so I’ve decided to open up another one of the Cover Girls of the DC Universe! And it’s Catwoman! Meow!

This release is from the most recent and third series of cold-cast porcelain Cover Girl statues, based on the art of Joelle Jones. I was away from these gals for a while, but a few months back I picked up the Mera statue and now I’m back with Selina Kyle. Although I still maintain that these two acquisitions were anomalies and I’m I’m not back to seriously collecting this line. I just don’t have the space for them. Anywho, Catwoman comes in a fully enclosed box with plenty of shots of the statue. And while she conforms to the same (roughly 9-inch scale) of the other ladies, the box here is a lot more compact because of the nature of the pose. Inside, she comes sandwiched between two styrofoam trays and the only assembly required is pegging the figure into the base via tow metal posts. 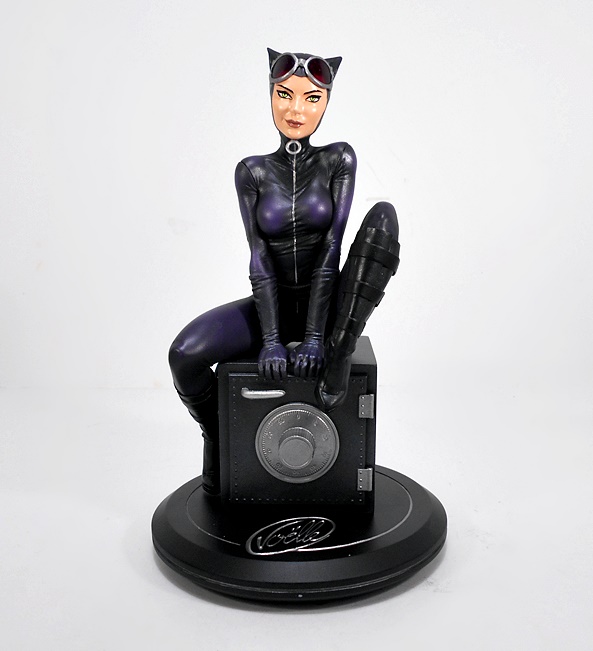 Straight away I’ll say that I love the composition for this piece. The vast majority of the Cover Girls have been fairly conservative, and very vertical, museum style poses. There’s nothing wrong with that. I love it. They all look great when displayed together. But if it weren’t for this release trying something different, I probably wouldn’t have taken notice and ultimately purchased her. Here, Selina sits atop a safe in a very cat-like pose, her hands resting in front of her and one leg drawn up on top of the safe. Overall, the pose is very reminiscent to me of the one Diamond recently did for their Marvel Gallery Black Cat. I don’t know which one came first, but this one instantly reminded me of her Marvel counterpart. 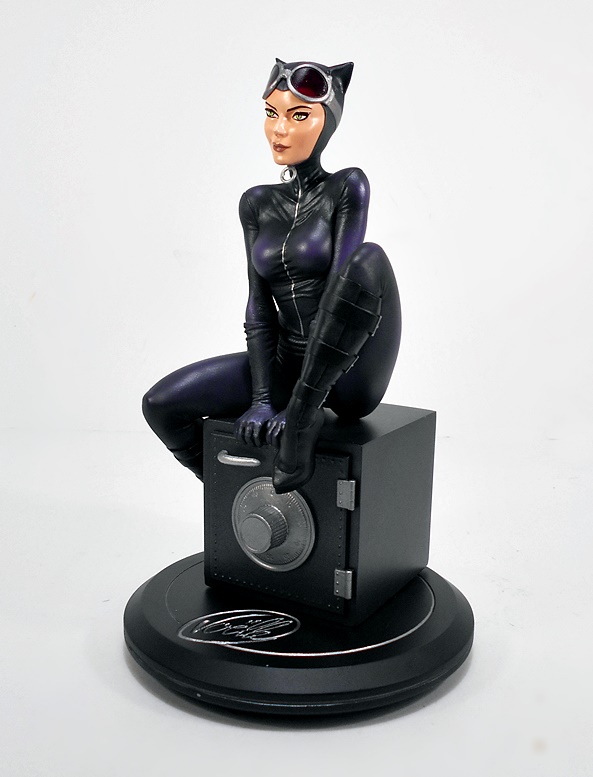 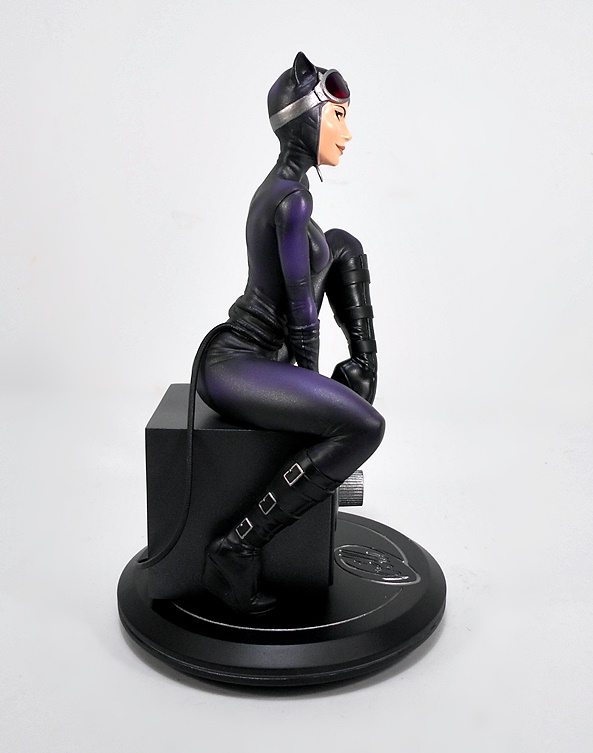 I love the simple look they went for with her costume. The skin tight catsuit features only some sculpted wrinkles and stitch lines in the way of details. Well, that and the silver ring zipper, which is surprisingly zipped all the way up to her chin. Yup, you’ll have to look elsewhere for your kitty cleavage fix. Her knee-high boots are each sculpted with three buckling straps and chunky high heeled wedges. Finally, her whip is sculpted coiled around her waist and snaking down the back of the safe like a kitty cat tail. The paintwork on the costume is also quite lovely with a mix of black and purple to depict the light reflecting off of it. Additionally, the zipper and boot buckles are all sharply painted with a crisp silver. 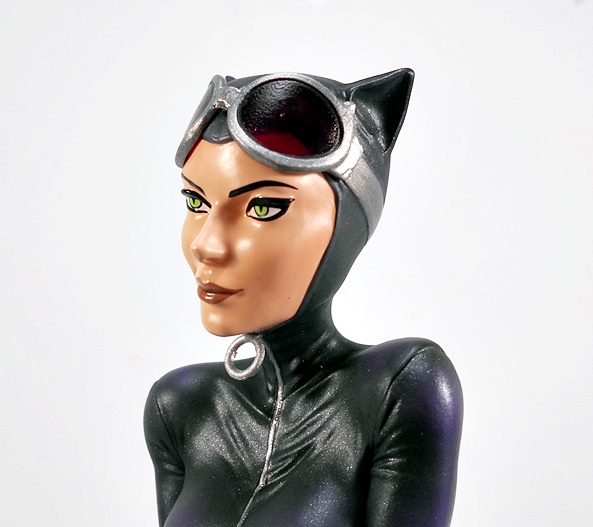 The portrait is just full of character. Selina stares ahead with her perfect green eyes and a cocky smirk on her lips. Her face is framed by the sculpted snug hood and her goggles are worn up on her forehead. The goggle rims and strap are painted silver to match the zipper on the costume and the lenses in the goggles are tinted red plastic. The headgear is topped off by two perfect little cat ears. I’ve got zero things to nitpick with the portrait. I was really sold on it based off the solicitation photos and I think this is one of those somewhat uncommon examples where the production piece came out just as good. 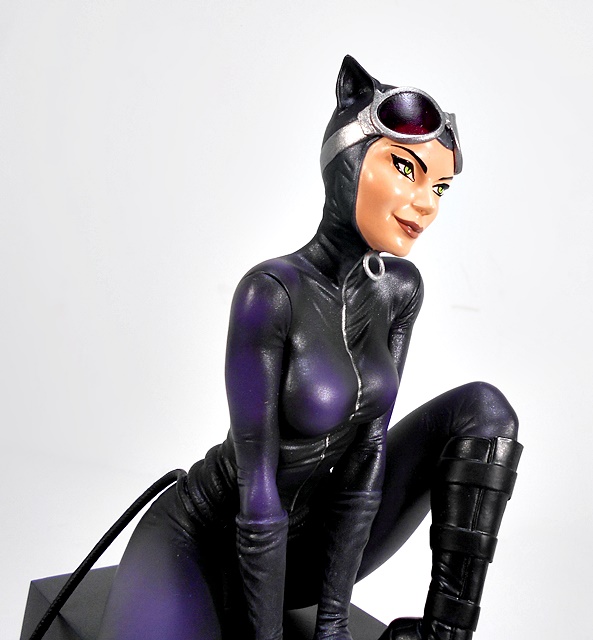 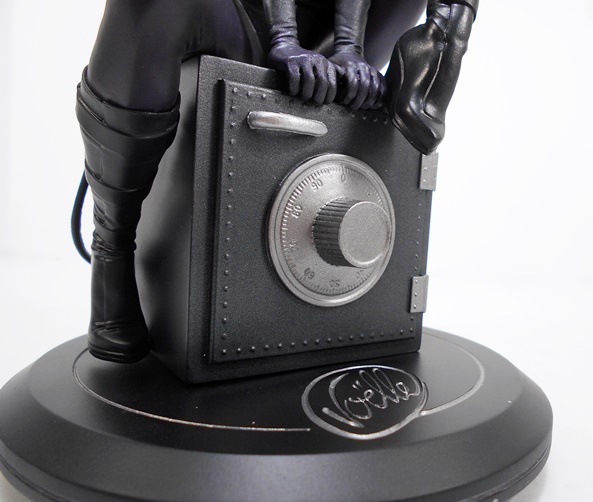 The safe is an extremely simple piece. It’s got a black matte metal finish to it and a raised door on the front. The door features two sculpted hinges, rivets running around the edges, a handle, and a giant combination dial the front. Diamond went a step further with their Black Cat piece, by having the safe door open, but I think this works just fine. The safe is detailed enough to look good, but it doesn’t upstage the figure itself. One of the odd things about this piece is that the base is sculpted with Joelle Jone’s signature. I don’t think any of the Cover Girls statues has done this in the past, and it further makes this statue feel like a stand-alone release to me.

DC Collectibles is still limiting these pieces, this time to 5,000 each. They are hand-numbered on the bottom of the base. I purchased mine quite a while after it was released, but still got a fairly low number, #468.

Catwoman tends to be something of a focus in my collection, so this may have been an inevitable purchase. Truth be told, I like the Cover Girls series a lot, but I truly have no place left to display these gals and I’m not keen on getting to the point where I’m cycling statues in and out of display because I have too many. Yeah, I already do that with my Gallery Statues from Diamond, but those are just so damn good for the money, sometimes I can’t resist them. Nonetheless, I think it was the distinctive composition mixed with the alluring portrait that made me bite on this one. I believe the MSRP on these pieces are up around $125, but they tend to list closer to the $100 mark. I think I paid $75 for this one as part of a holiday sale. Yup, she really has been waiting around to be opened for a while. But I will say that she was money well spent.

One comment on “Cover Girls of the DC Universe (Series 3): Catwoman by DC Collectibles”