It’s a new week and that means a new Marvel Monday, so I’m continuing to dip into the relatively new Demogoblin Wave of Marvel Legends. Last week I had a look at the Mark III Spider-Armor from the PS4 Spider-Man game, and since we got one more figure from the game in this assortment, I decided to open this one up next. Today we’re checking out the Velocity Suit!

Other than the snazzy white GamerVerse boxes, I’ll confess to not being all that excited about these figures. The prospect of giving Peter Parker 1,000 different suits like Tony Stark’s armor just doesn’t appeal to me, but I guess it makes sense as an incentive gimmick in a video game. Plus, having a bunch of different suits to make action figures out of probably had Hasbro licking their collective chops. Speaking of which, the Spider-Man game remains sealed on my shelf, because I just haven’t had the time to play it. And yes, I do see the irony in that since the majority of the country is under lock-down vacay, while I am just working more hours. Nonetheless, I wound up liking the Spider-Armor well enough, so here’s hoping I can find something to love here as well. 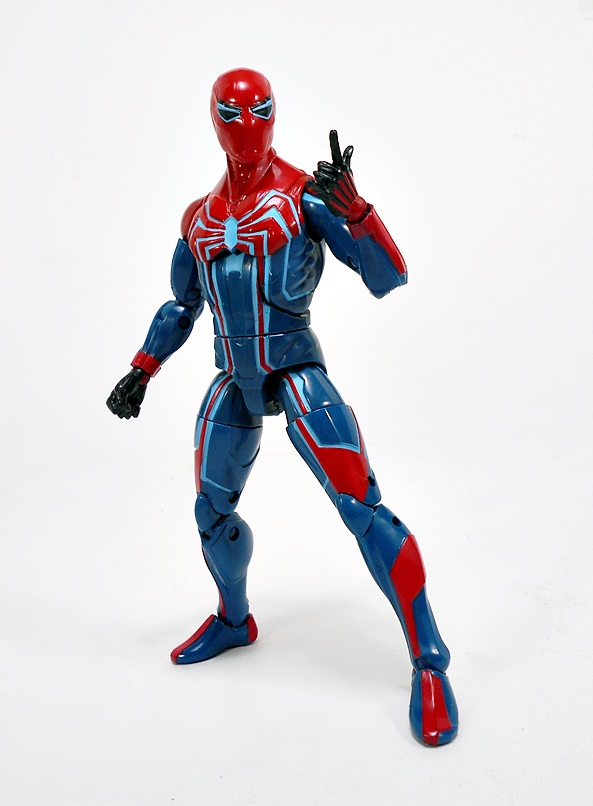 As the name suggests, the Velocity Suit gives Peter a speed boost. The figure doesn’t make use of any texturing, instead giving the suit a smooth and slick surface all around. That combined with the high gloss finish makes this one look as much, if not more, like armor than the previous figure. Maybe they were going with the idea that smooth means less friction and that leads to speed. Or more likely they didn’t put that much thought into it. The deco consists of a red and dark blue base, which is fairly familiar, but adds some light blue lines and integrate the spider emblem into their design. Virtually all these light blue painted lines on the suit are part of the sculpt, which is cool. Based on how they’re executed on the figure, I’m going to assume these channels glow on the suit in the game. Whatever the case, I have to confess that the high gloss paint looks great and goes a long way to sell me on a figure I don’t really care about. 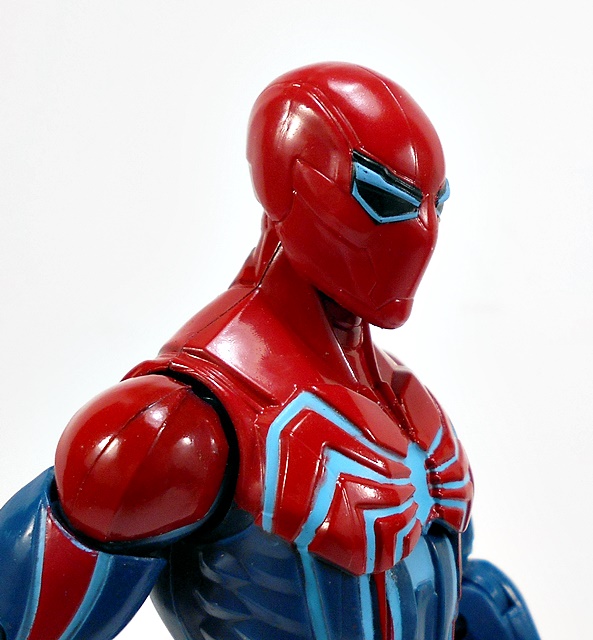 The head sculpt strikes me as being very Stark-like in design, perhaps even more so than the last figure. There are even some faint panel lines that seem to form a mouth, although they are very subtle. The eyes feature more of the light blue piping around them. What else can I say, other than to admit it looks good. 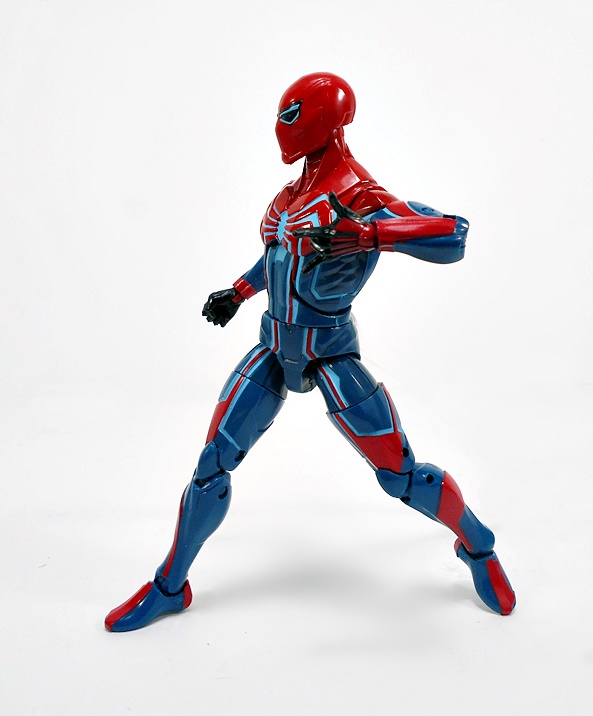 As with the Mk III Spider-Armor, the articulation here lacks the shoulder crunches we see on most Legends Spider-Man figures, and that makes the figure feel a little more stiff than I’m used to my Spider-Man figures to be. But the rest of the articulation is there, making him fun to fiddle about with. Here too, we only get the hands that are attached to the figure, one right fist and one left thwippy hand. The only other noteworthy thing about the articulation is that the ab crunch doesn’t seem to have as wide a range as usual. I don’t know why, all the points are there, but this one looks a little stiff when posing. 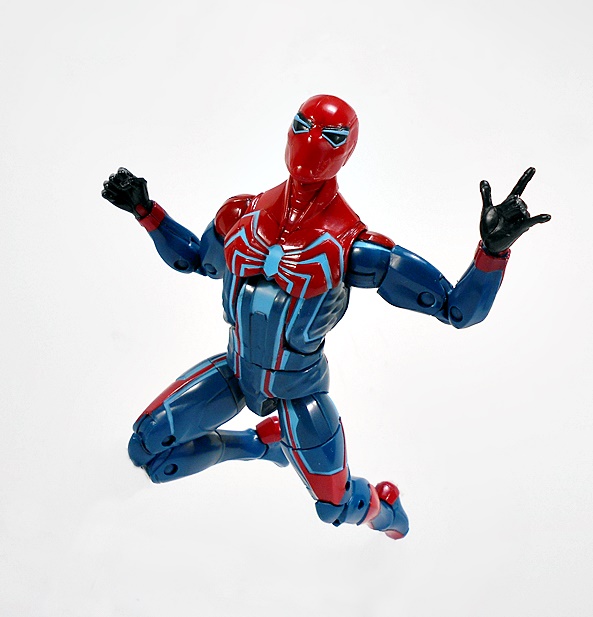 I don’t imagine that it’s a coincidence that Hasbro chose these somewhat uninspired Spidey figures to be the first to get web effects included. The Mk III armor came with webbing to cover an adversary’s face. This one comes with a loop of webbing to tie up a foe and it’s pretty great. I usually keep effect parts bagged with the figures they came with, but I think I’ll be keeping these on hand to use with future Spidey figure shoots. 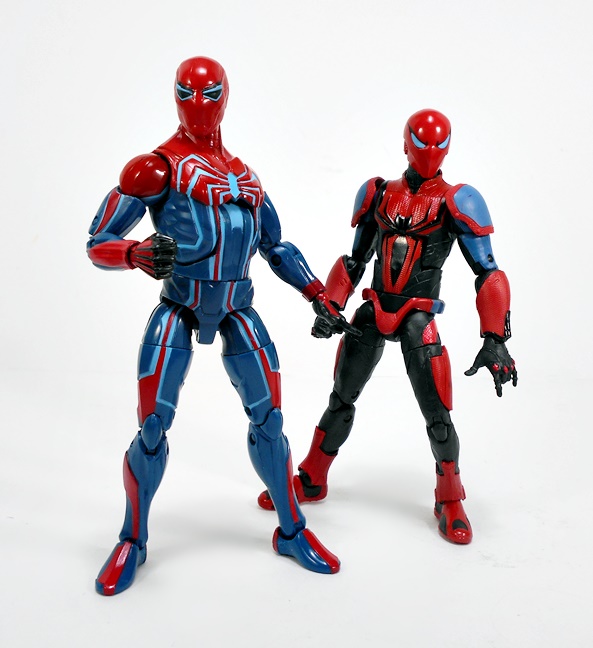 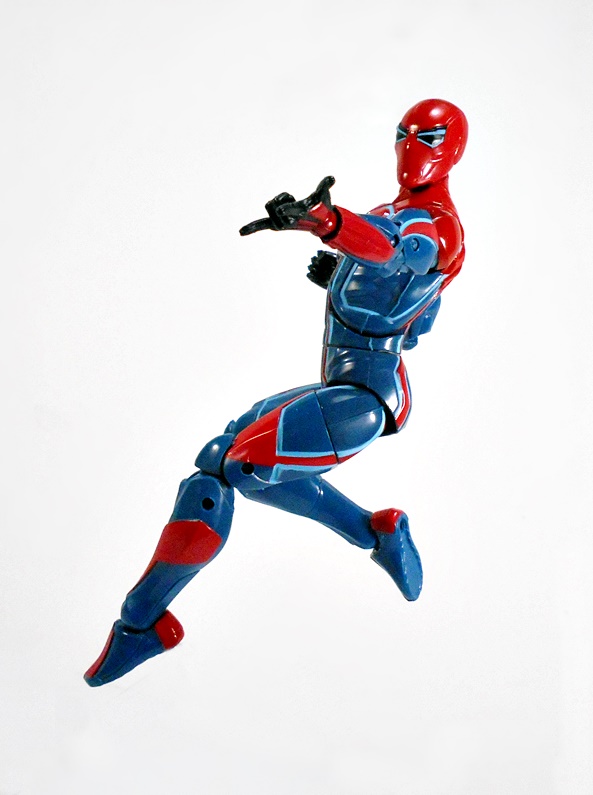 Conceptually, I just don’t give a crap about this figure. The idea of a go-faster suit for Spider-Man is just kind of stupid to me. Nonetheless, I can’t deny that it’s an attractive figure. The sculpted lines and the brilliant new-car finish really makes the red and blue pop splendidly. In the end, I bought these for the effect parts and BAF parts, and because I got them super cheap, but both this one and the MK III Armor managed to win me over in the end. I’ll certainly find a place for them on my Spider-Verse shelf, but they’ll probably be towards the back.