Why do I love collecting ThunderCats so much? It probably has to do with it being one of the few 80’s toy properties where I watched the cartoon religiously but never had any of the toys. I guess maybe I’m making up for lost time? And here comes Super7 to help me stoke that plastic furnace of thunder kitty love! I should just start a new recurring feature called Mint on Card by Super7, because I have been picking up a lot of their ReAction figures lately, and these remain the only figures I buy with the intent of leaving them carded. I realize that Mint on Card reviews aren’t terribly exciting. And believe me, if they weren’t so expensive, I’d be grabbing doubles of these figures to open, but at $18-20 a pop, that’s not going to happen unless they go on clearance somewhere. Anywho, Super7 has been hard at work keeping the ThunderCats Classics line they acquired from Mattel going, but they’ve also given us this little snack to tide us over in the form of ReAction ThunderCats! 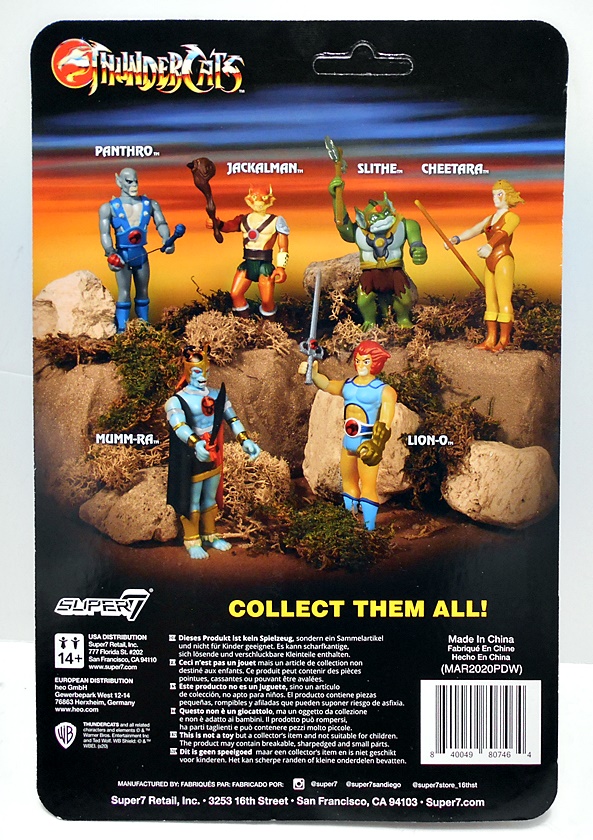 For the uninitiated, the ReAction line takes various properties and converts them into retro-style figures similar to Kenner’s Star Wars line. This practice had varying degrees of success in the hands of Funko, but now that Super7 has taken over, the results have been a lot more even. The first wave of ThunderCats consists of six figures and it’s a satisfying mix of both Cats and Mutants. The assortment includes Panthro, Jackalman, Slithe, Cheetara, Mumm-Ra in his powered up form, and Lion-O. It’s a solid assortment, unless you happen to be a Tygra fanboy, and then you’re shit out of luck until the next wave. As always, these figures feature five points of articulation each and come carded on beautiful retro-style packaging, which is decidedly not collector friendly. The back of the cards all feature the same Collect Them All photo of all the figures in the wave. Let’s start out with a look at the Cats! 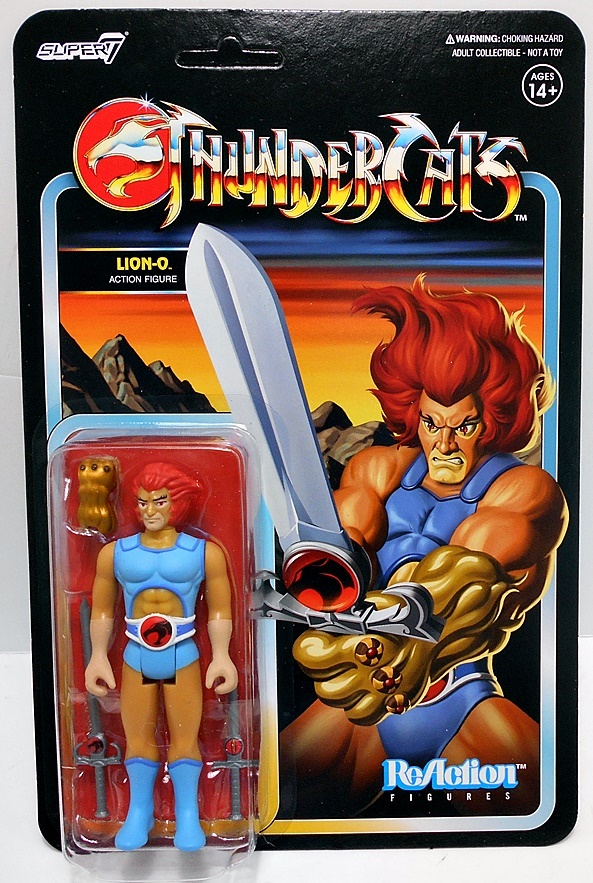 You can’t have a first wave of ThunderCats without Lion-O, The Lord of the ThunderCats! Also, I think Cheetara was a fine choice, because she often gets pushed to later releases so it’s nice to see her out front and center. And Panthro is the third to round out this trio. So, assuming we’re going to get single carded releases of the Thunder Kittens, this wave splits the team of heroic kitties right down the middle, leaving WilyKit, WilyKat, and Tygra for the second assortment. What about Snarf? Honestly, I would have expected him to be included with Lion-O as an accessory, but it’s probably not out of the question to get him as a single carded release. We’ve seen ReAction figures as small as Gizmo from Gremlins released in the past. But before getting into the figures, let me take a moment to gush all over these cardbacks, because they are indeed gorgeous.

I think Funko’s biggest misstep with ReAction was saving money by using a single generic card for each series. It was a missed opportunity to exploit the potential of the whole retro-carded formula. Super7 recognized the value in collecting these figures as showpieces, making the card itself almost as important as the figure. As a result, the art for each of the characters is unique, dynamic, and exciting with the characters spilling out over the borders of the cards as if they’re coming right at you. Almost like these ThunderCats are loose! Lion-O strikes his iconic pose, Panthro looks like he’s ready to put the beat down on some dirty Mutants, and Cheetara is just looking sexy as all hell. Meow! All of the cards feature the beautiful ThunderCats logo emblazoned across the top and the Kenner-style ReAction logo in the bottom right hand corner. My only complaint here is that Super7 really should have credited the artist on the back of the card. It just feels like that’s a major part of what makes these so collectible. 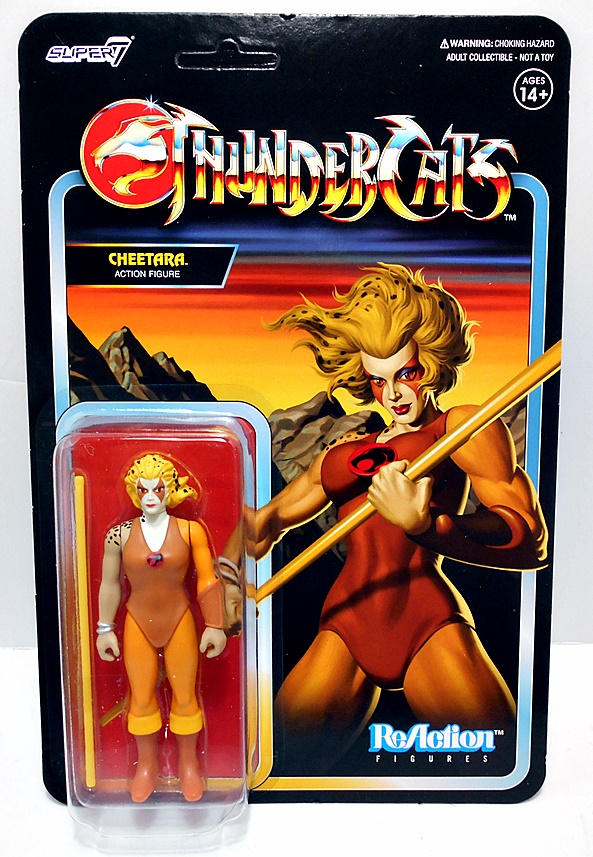 The figures are fitted into trays inside the bubbles ensuring they’re accessories stay put and the Cats are always in the optimal position for display, which is a huge win over Super7’s Teenage Muntant Ninja Turtles ReAction (I’ll have a look at those here soon!) where they just are just rattling around in their bubbles. Sure, the later is more accurate for the vintage vibe they’re going for, but I’m willing to embrace the anachronism for a better display item. The sculpting on these figures is sharp and the paint is bright and clean. Of the three, I think Lion-O and Cheetara are the best at representing their characters. That’s not to say Panthro is bad, but I think he lost a little too much of his buff physique when being adapted to this format. These look like they’re the result of a lot more love and care than Funko ever injected into their ReAction figures, and the quality seems to be leaps and bounds better too. The accessories are pretty much what I would expect, with the ‘Cats possessing their iconic weapons. Panthro has his nun-chucks, connected with a piece of black string. Lion-O comes with both versions of the Sword of Omens, one retracted and one extended, as well as his Claw Shield. The swords are cast in gray plastic with the Eye of Thundara painted on the hilts. Cheetara’s staff is obviously the least interesting of the arsenal. Let’s move on to Mumm-Ra and the Evil Mutants!

As with the Cats, I think Super7 made some good character choices here as well. Mumm-Ra was a no brainer, but I would have been happier with either this or his decrepit mummy form. Slithe is the Leader of the Evil Mutants, so he was a natural choice. As for Jackalman? Well, honestly they could have gone with him or Monkian and I would have been fine. Poor Vultureman never seems to get any love. Ah well, maybe in the next Wave.

The card art for the baddies is (mostly) every bit as good as what we got for the Cats. I’m not ashamed to admit that Mumm-Ra scared the ever-living shit out of me when I was a kid, and this character art captures that freakish terror perfectly. From his beady red eyes, to his grasping claw and his shredded bandages, I can practically hear his demented blathering. Slithe has that bloated and confused look that he often shows, although they didn’t quite get his one popped eye right for the card. Finally, Jackalman looks good, but his jaw looks like it’s kind of sloffing off. But seriously, I’m nitpicking. This art is just fantastic. 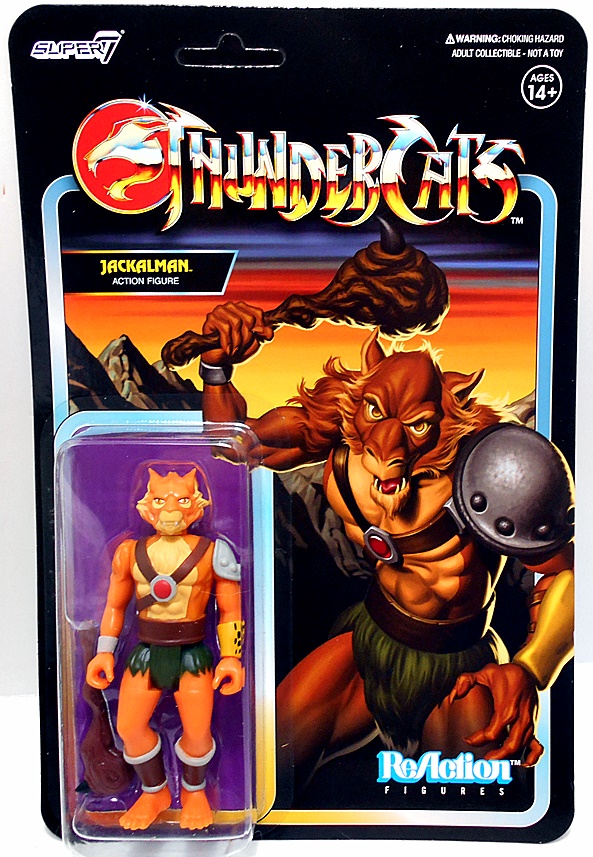 As for the figures, they’re pretty great too. I was particularly interested to see how they would do Mumm-Ra’s cape and bandages, and they went with sculpted bandages and a vinyl cape, and I wholeheartedly approve. Slithe is particularly cool because they gave him his short and squat body type and his tail can be seen tucked between his legs too. As for Jackalman, well his little noggin is a work of art. As with the Cats, the coloring on these figures is superb. They’re bright and beautiful with some sharp lines and careful applications. As for accessories, Mumm-Ra comes with his sword and a dagger, Slithe comes with his axe, which is mostly hidden behind his back, and Jackalman comes with his spiked club.

By now the ThunderCats have been released in just about every scale and style I can imagine. From the more animated faithful figures made by Ban Dai and Mattel to the vintage Masters of the Universe style of Funko’s Savage World, and now we have the old Kenner style. I like these a lot, and I think the characters translated pretty well, but I can imagine that they aren’t going to be everyone’s cup of tea. The biggest advantage to these little fellows would be allowing vehicles to be smaller and less costly, but I’m not sure if that’s part of Super7’s plans. Still, a 3 3/4-inch scale ReAaction Thundertank would be damn cool, not to mention a little playset based around Mumm-Ra’s tomb. Anything like that would certainly get me to spring for a second set of these to open and play with. In the meantime, I’ll just be anxiously awaiting a second wave. How about Tygra, WilyKIt, WilyKat, Shriveled Mumm-Ra, Monkian, and Vulture Man. Yeah, that would do nicely!

2 comments on “ReAction ThunderCats (Wave One) by Super7”