If the last couple weeks were any indication, Hasbro may have seriously underestimated the demand for the new GI JOE Classified figures. The first wave seems to have flown off the shelves, at least in my area, and the new wave of Target Exclusive Special Mission: Cobra Island figures sold out instantly online and are selling out in stores even before the issued Street Date of 8/14, which is today! Of course, it doesn’t help when one of those figures is a Cobra troop builder, and that’s who I’m checking out today!

You can never be too sure what you’re going to get with this line’s design, but I’m happy to say that Cobra’s mainstay trooper offers a welcome nod toward the traditional and iconic. The packaging is similar to what we’ve been seeing all along, with some fantastic artwork and the Cobra Island logo added to the front of the box. And look at all the stuff they packed in there! The tray is positively bursting with goodies! The rest of this assortment includes Beachhead, another version of Roadblock, and Baroness with a motorcycle. I’ve been shit out of luck with the rest of them, but I’m thankful for a buddy of mine who found a couple of these and shipped me one at cost. 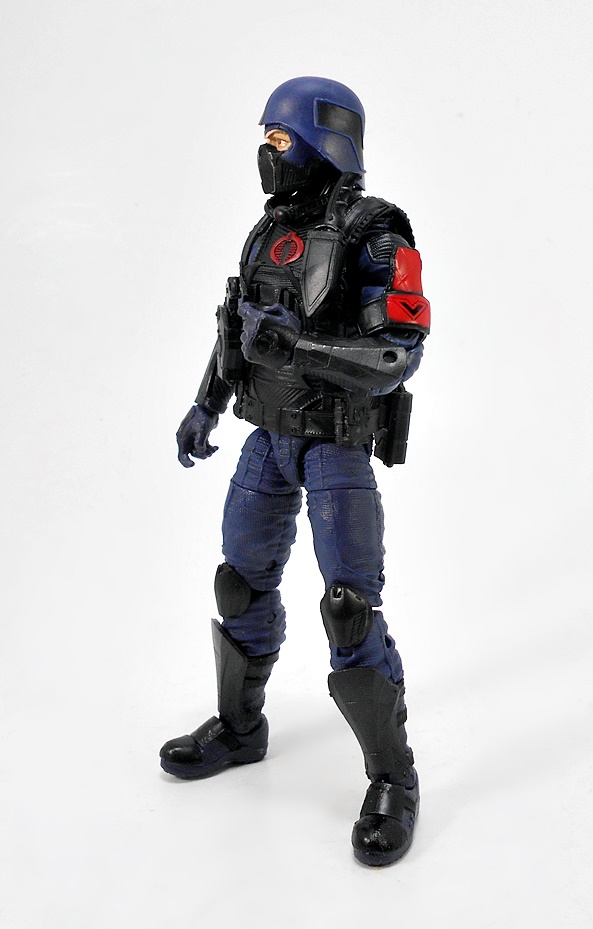 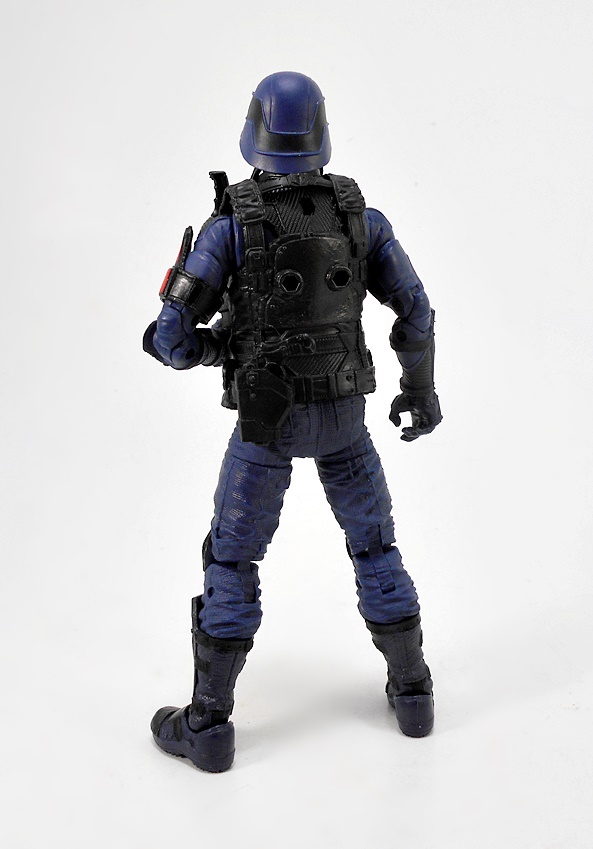 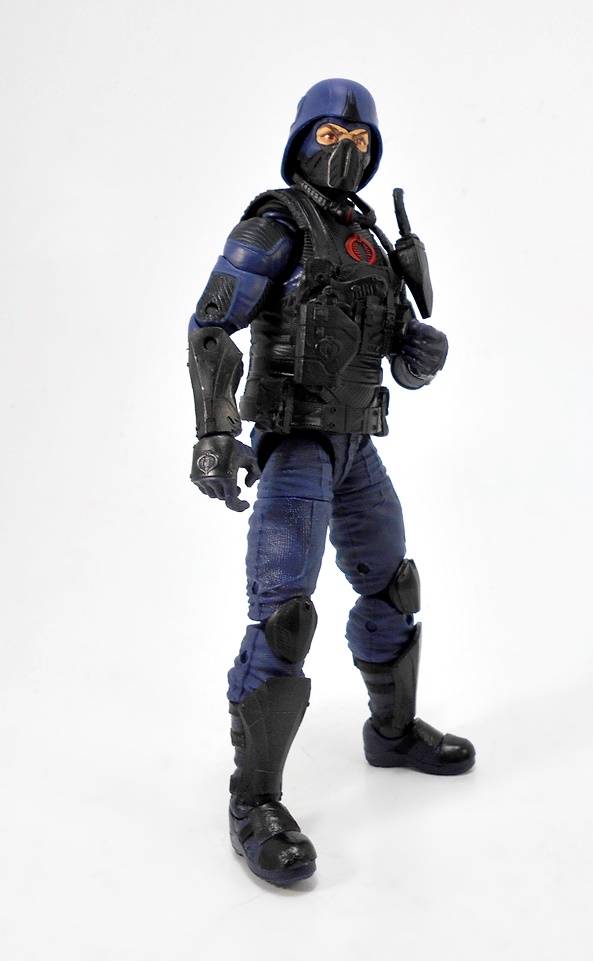 I’m happy to say that this figure hits all the points that I’m looking for in a traditional Cobra grunt. Indeed, he eschews a lot of the solider-on-parade look of some of the early Cobra Trooper designs and adopts more of a down-and-dirty urban warfare look that I dig a lot. He has a very traditional blue uniform, which is reinforced by sculpted black pads on his upper arms, black bracers on his forearms, black kneepads, and high black boots. His upper chest has a sculpted black panel with a bold and embossed red Cobra emblem, and the rest of his torso is covered by a highly detailed flak jacket. Some nice touches include the additional Cobra emblems embossed on the backs of his gloves… they really branded the hell out of this guy! There’s also an optional red armband to give him a little more color. I really can’t say enough good things about how this overall design turned out. He just looks like a force to be reckoned with.

The head sculpt is that of a determined killer. Just look at those eyes! He looks like a real nasty piece of work. He’s wearing a balaclava to cover everything but his eyes and those rather cross eyebrows, and the usual black Cobra facemask has been upgraded to what looks like some kind of breather unit with some great sculpting. The helmet is removable, but it fits quite well and doesn’t keep popping off when I’m posing him. Without the helmet on, I’m getting a major Mortal Kombat vibe off of him, and I’m not sure that’s a bad thing.

He also has a pair of what I presume are night vision goggles, which can be worn down around his neck when not in use. This eyewear transforms him into pure nightmare fuel. Seriously, I find this bug-eyed look absolutely terrifying. 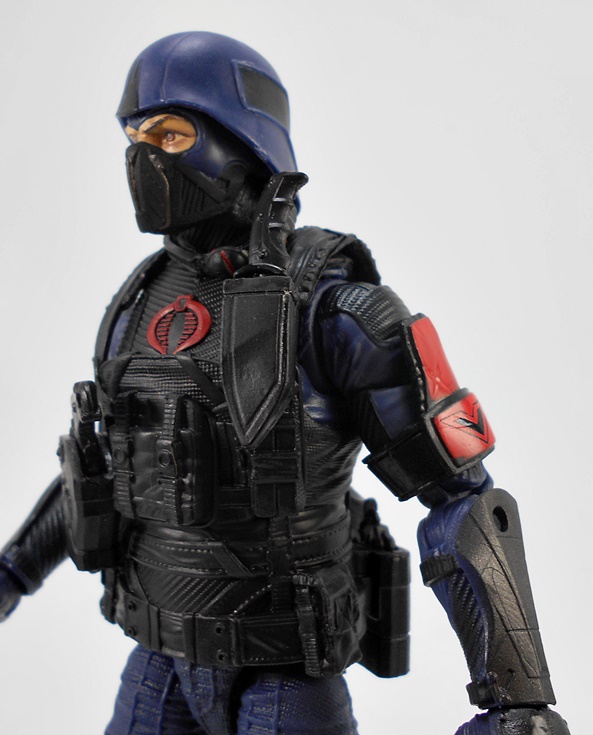 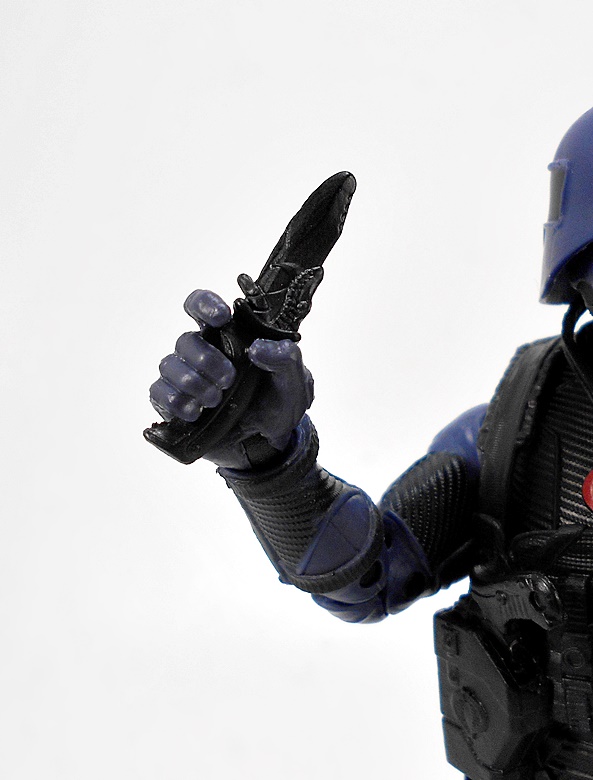 The Cobra Trooper comes with a lot of weapons, and I’m delighted to say that he can wear his entire arsenal on his person. Let’s start wiht his flak jacket! There’s a sheath attached to the left shoulder strap to hold his rather odd little combat knife. The accessory is molded in black plastic, has a curved grip that fits his hands well, and if you look really close you can possibly make out the serpent head at the base of the blade with its mouth open to make the blade appear to be protruding from his maw. The blade itself is stubby and has no point. It almost looks like one of those ancient flint knives you see in museums. This is not the type of cutlery I would have expected a Cobra Trooper to be carrying, but it is certainly unique. 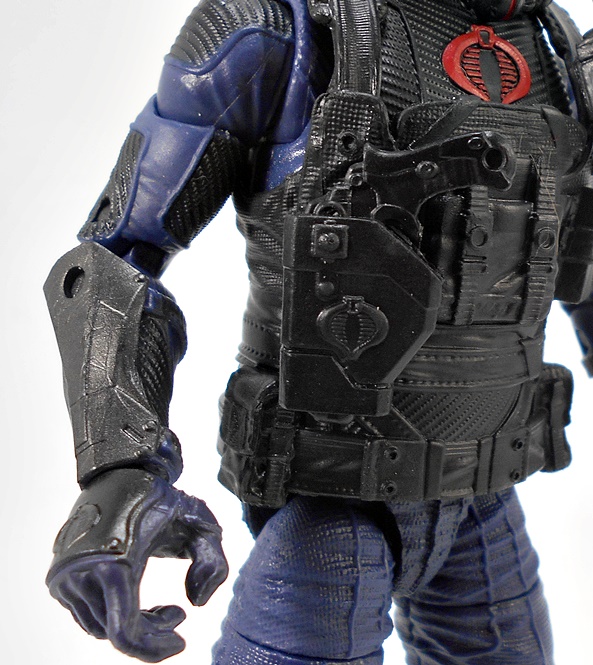 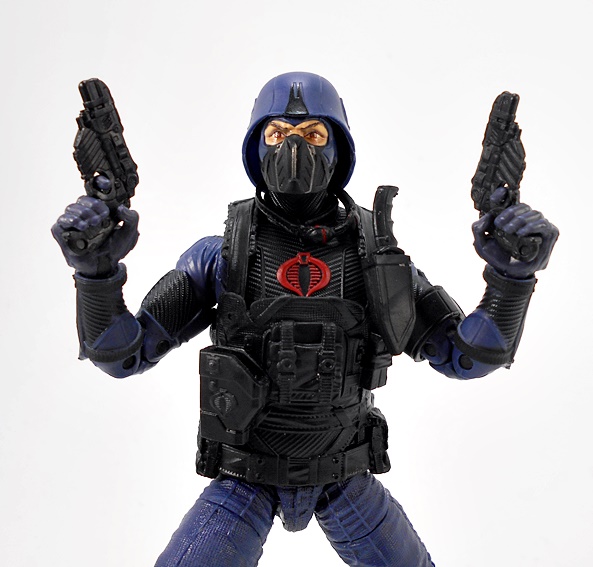 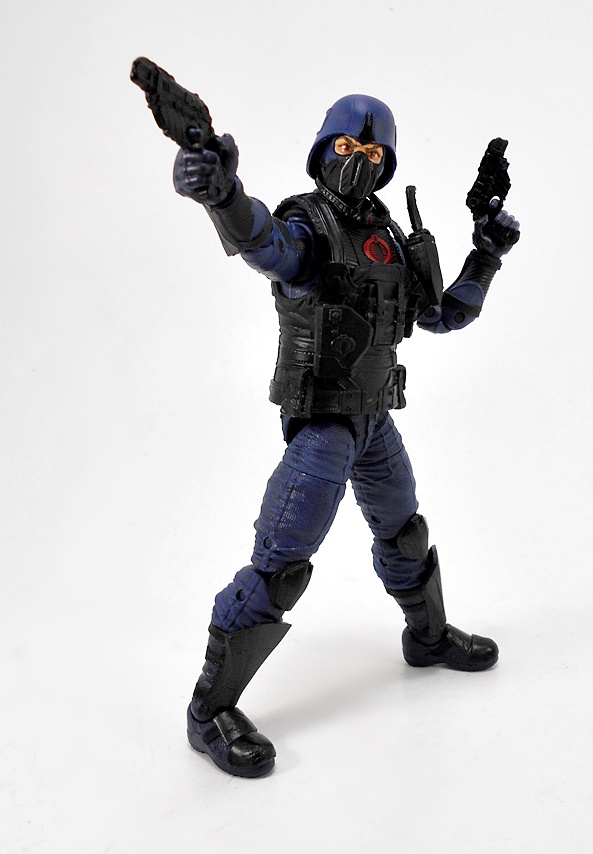 Next up, the Trooper comes with a set of matched pistols, one of which is stored in the holster to the front, right side of his flakjacket, while the other is attached to the bottom left side of the back of the jacket. The front holster is actually branded with yet another raised Cobra emblem. These pistols follow the decidedly sci-fi designs that we’ve been seeing in most of the Classified weapons, but I think these are pretty cool looking.

Moving on to the bigger guns, the Cobra Trooper features holes on his back that his other guns can peg into. First off, he has this pretty sweet looking carbine. Yeah, once again it’s got a futuristic flavor to it, but in all fairness modern Assault Carbines are getting so crazy looking nowadays, I could probably believe this is a real weapon. 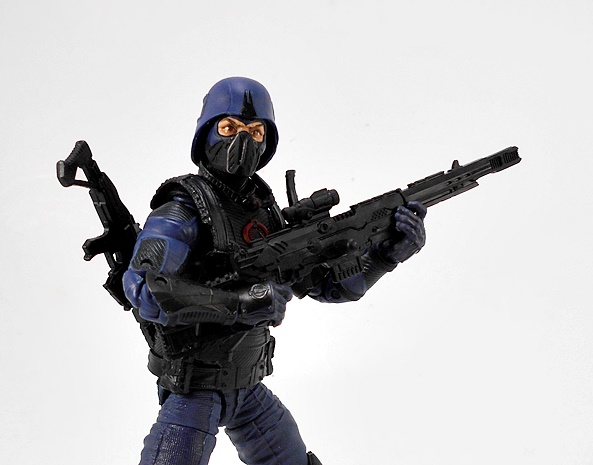 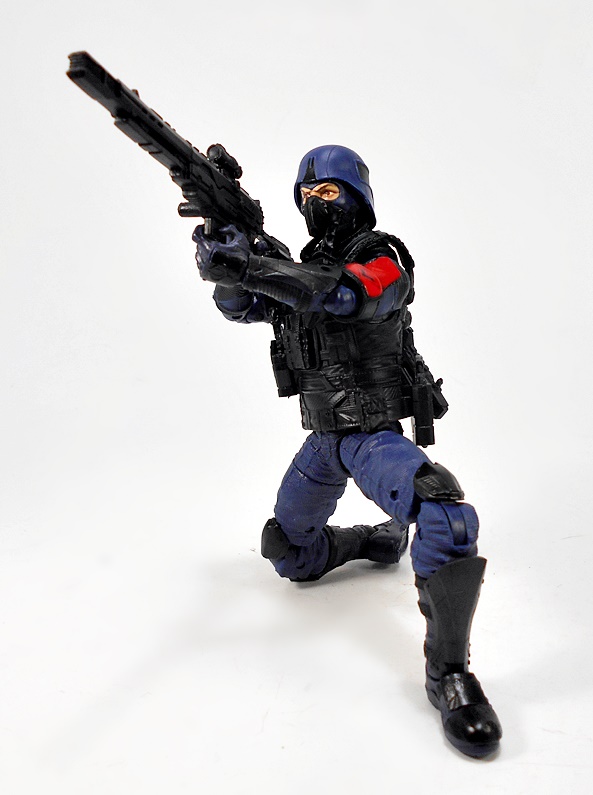 And finally, he has this rather large rifle for when he needs to make a bigger, bolder statement.  Once again, it’s definitely fictional, but not outside of the realm of possibility. This one has a scope, a short magazine, and the peg that holds it into his back can double as a grab bar. The weapons in this line have been a bit of a mixed bag, so I’m happy to say this Trooper’s are excellent. The detail invested into them is top notch and I’m glad their molded in black plastic to give them that sense of realism. 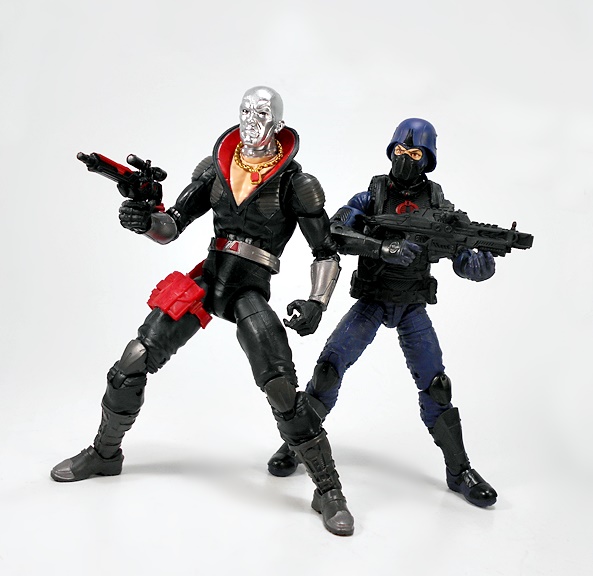 There’s no other way to say it, Hasbro absolutely killed it with this figure. The overall design makes him look like a rough and ready combatant to be reckoned with. He’s a foe to be taken seriously, rather than the bumbling oafs that were peppered over most episodes of the Sunbow cartoon. And besides looking great, Hasbro loaded him up with some pretty cool weapons and a place for him to carry every last one of them. What’s not to love? Well, how about the difficulty acquiring one, let alone actually troop building them. I got shut out of the pre-orders immediately, and just got very VERY lucky to have a buddy looking out for me. I figure that I need at least two more of these Troopers, but honestly, if I ever do actually see him on the pegs, I”m pretty sure I’ll buy every one I come across. Hasbro is really missing out if they don’t decide to offer some kind of troop building deal on their Pulse store. Sure, this one is a Target Exclusive, but I’m sure they can work around that pretty easily. So listen up, Hasbro. You bundle four of these guys for $100, and I’ll order me up a set. Unless you don’t want my money.