What’s this? Marvel Monday again! It feels like the weeks are just flying by. I think I’m a little more than halfway through this Black Widow-themed assortment of Marvel Legends. Today I’m going to let it ride with the comic-book figures and have a look at Blue and Yellow Deadpool! Oh no, wait. It’s Spymaster. My bad! 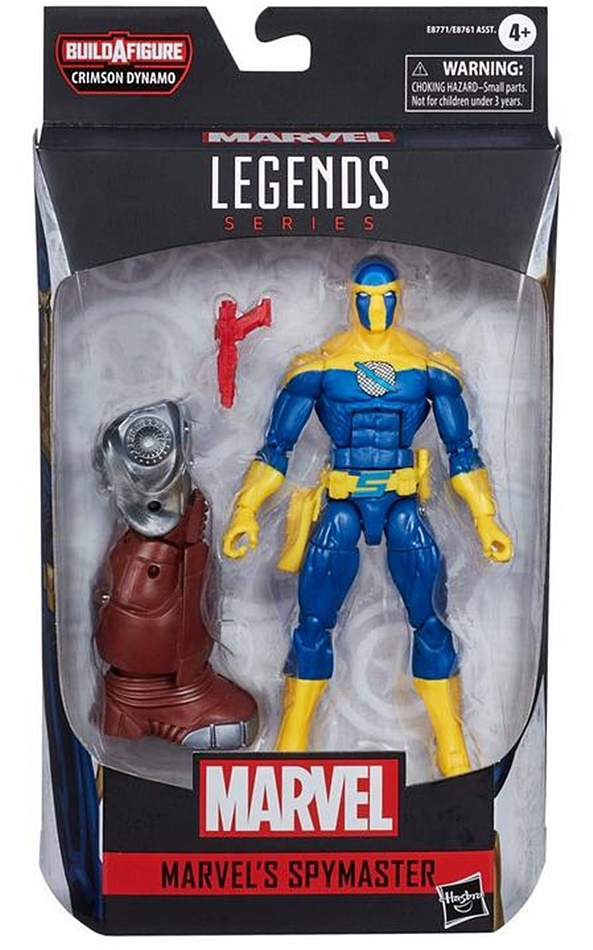 Yes, fans can now breathe a sigh of relief because Spymaster has hit the modern Legends line. And if you didn’t read that with a sarcastic tone, try it again. Me? Well, I dig deep cuts like this one, and with all the Iron Man figures I have, it’s always nice to toss in another one of his advesaries. Why is he in this wave? I dunno, maybe because Taskmaster trained him? It’s like a six degrees of separation kinda thing. Anyway, Hasbro backed off the artsy red and black color scheme for this package, probably because it wasn’t going to work with the character’s distinctive color scheme. 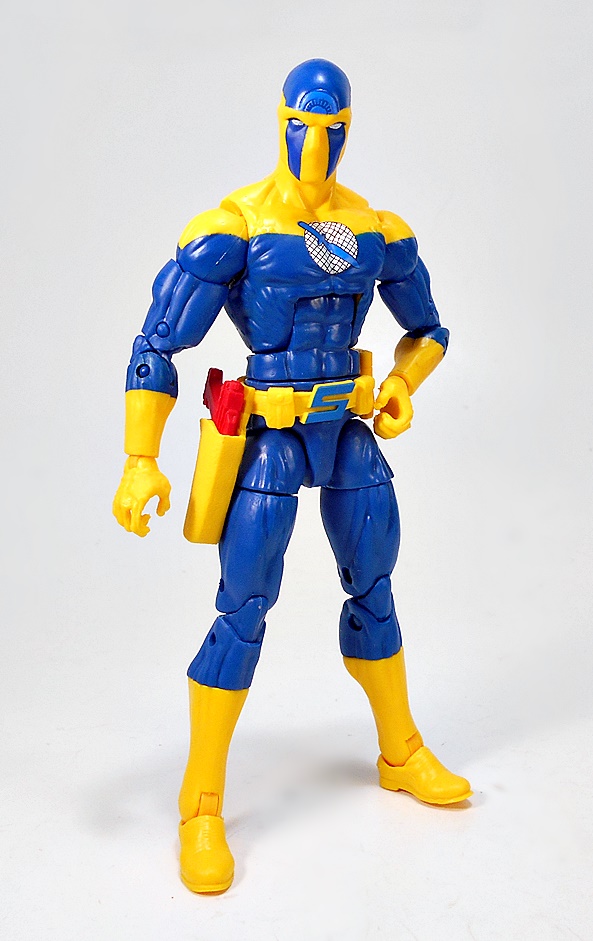 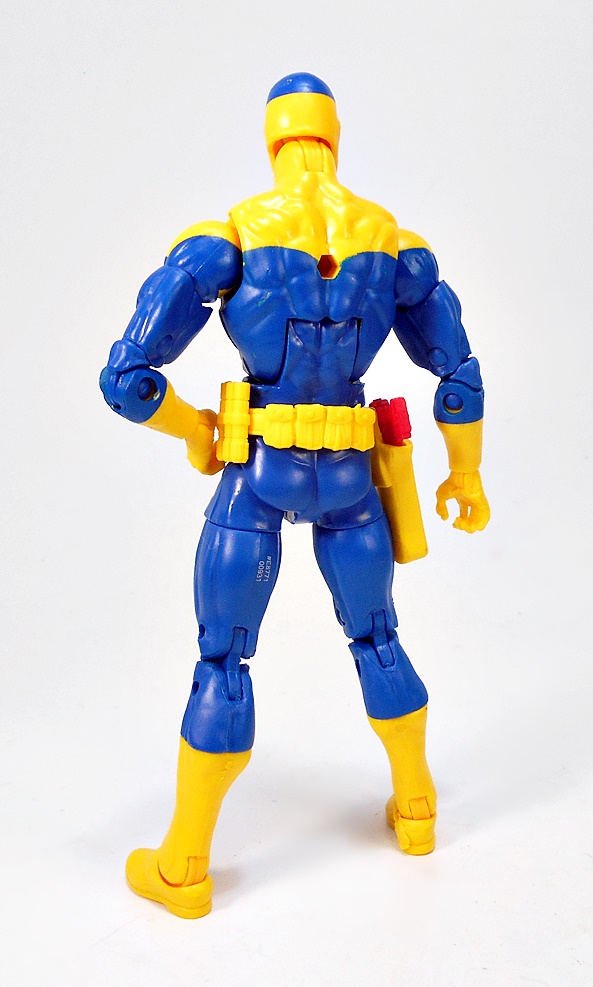 Now to be fair, this is not my first choice for costume. I would have much preferred his silver and black suit. But with that having been said I actually dig the flashy cheese of this look. How you get any spying done dressed like this, I don’t rightly know, but hey… you be you, Spymaster! As I’m sure you can tell, this is one of them budget figures that gets by on a lot of paint and very little fresh sculpting. But the paint lines are clean, there’s really no bleeding, and the vibrant yellow looks great alongside the darker blue. The only other detail is the chest logo, a dagger against a checkered backdrop, which is razor sharp. 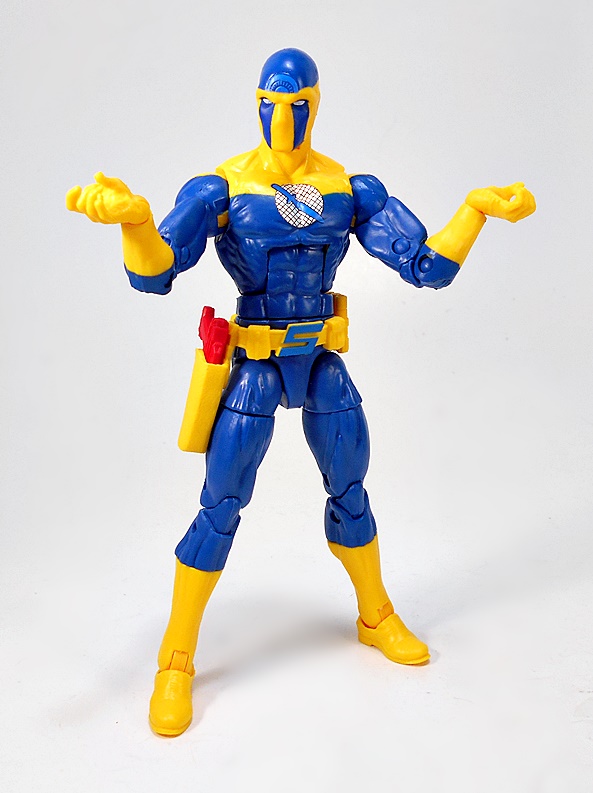 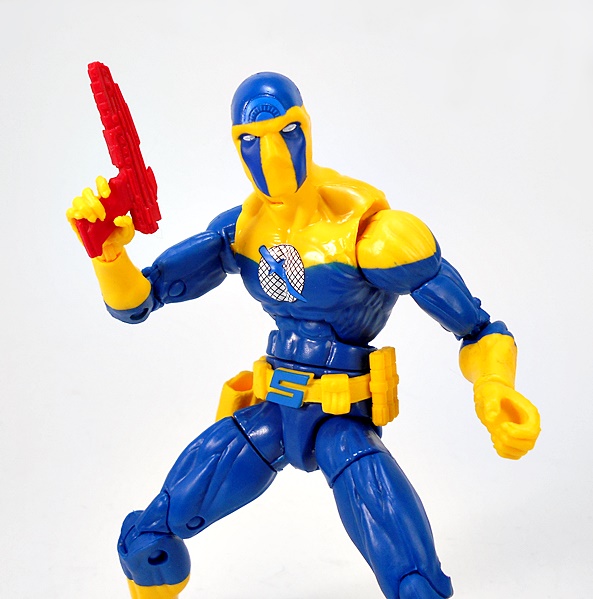 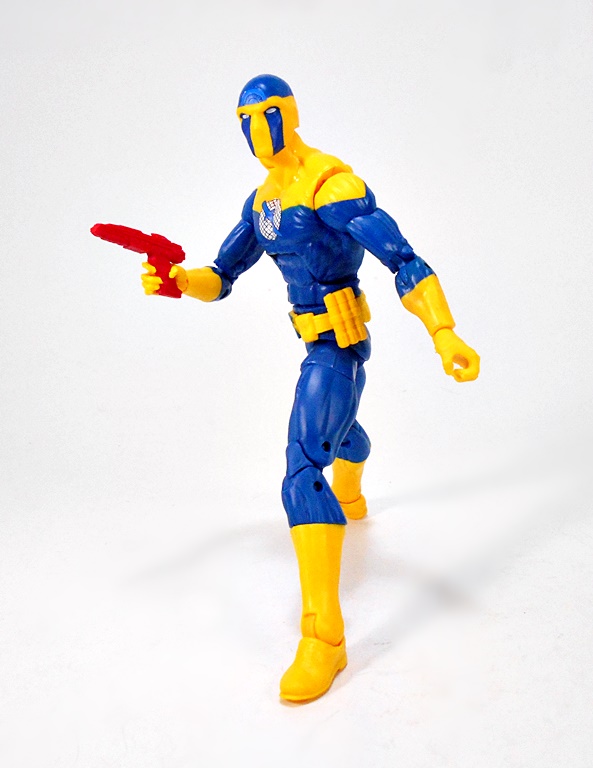 From the neck down the only new sculpting we get here is the yellow utility belt, which includes some sculpted pouches, a flash “S” logo as a buckle, and functional holster for Spymaster’s sidearm. The firearm is molded in red plastic, because that’s exactly the color this suit is missing! I feel like I’ve seen this pistol before, but I can’t quite place who had it last. It’s a very futuristic design, but I seem to recall his gun being a little chunkier. But what the hell, I think it suits him pretty well. 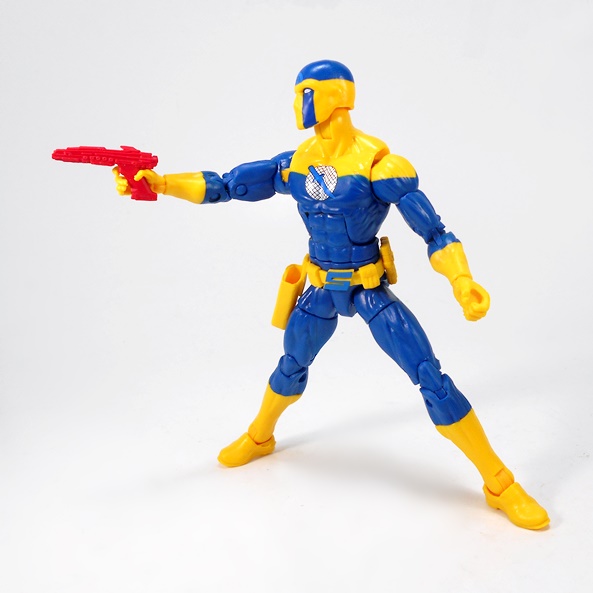 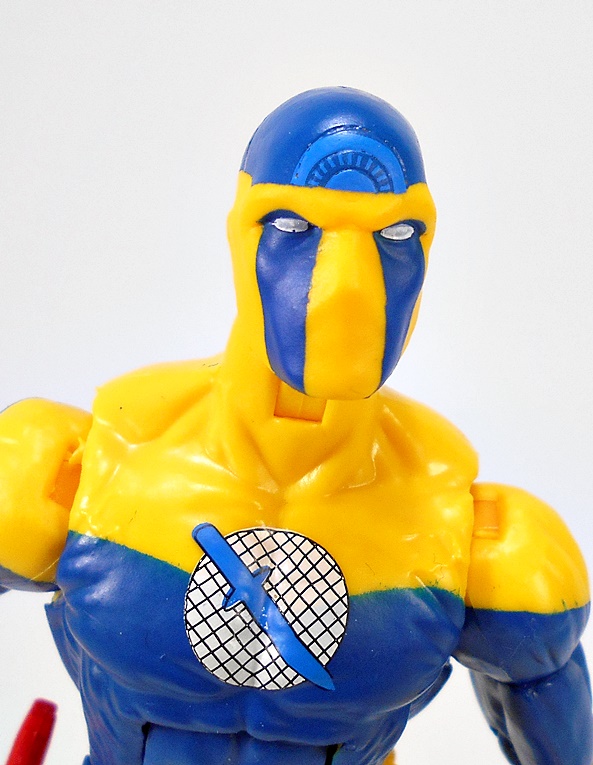 The head sculpt is new, with a disnctive arch sculpted into the forehead. There are some vague facial features sculpted into the mask as well as a rather prominent brow. The eyes are without pupils, and as with the rest of the figure the paint here is vibrant and sharp. 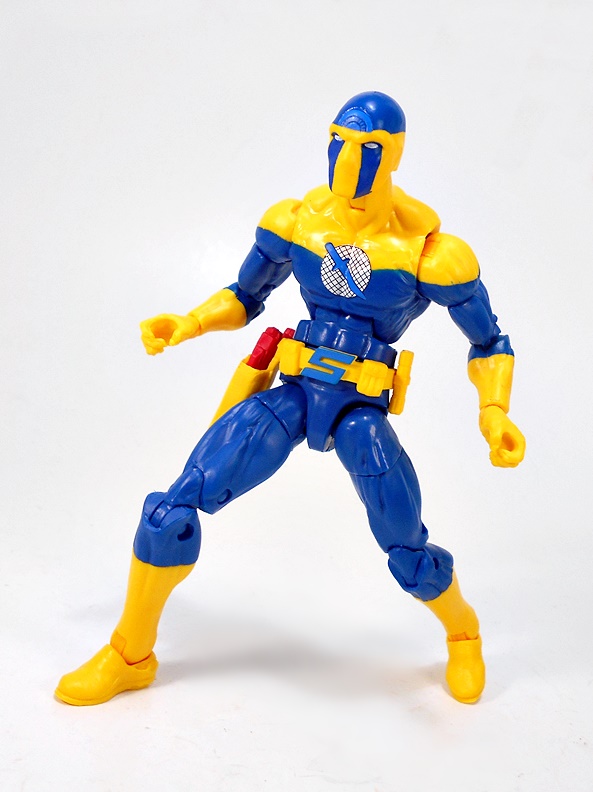 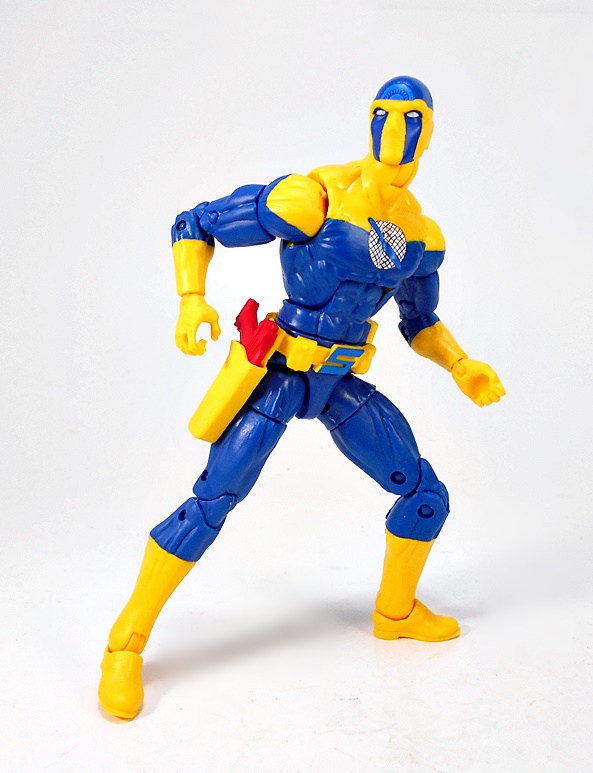 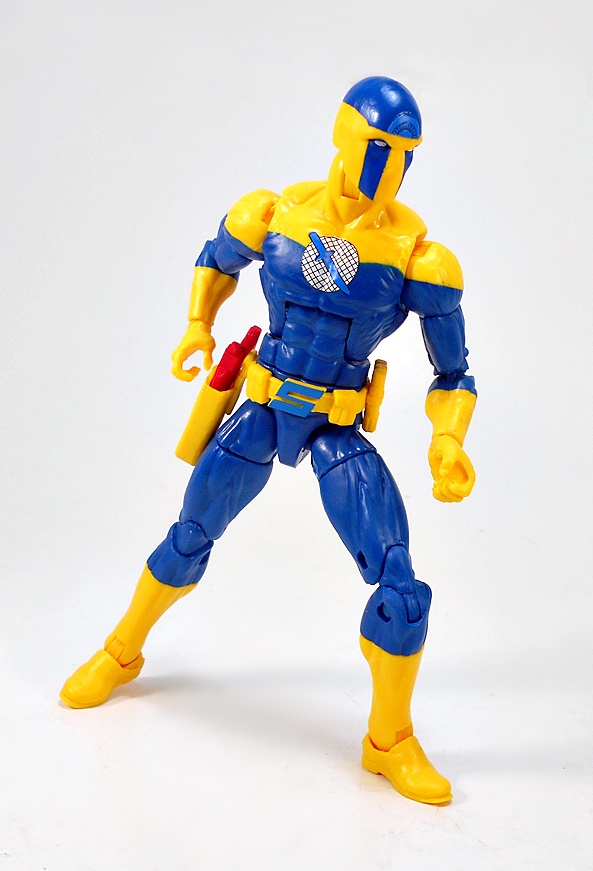 Spymaster’s articulation makes for a fun figure and features all the usual points I’m used to seeing in my Legends figures. The legs are ball jointed at the hips, have double-hinged knees, and swivels at the thighs and tops of the boots. The ankles have both hinges and lateral rockers to keep him stable even in those wide stances. The arms have rotating hinges in the shoulders and wrists, the elbows are double-hinged, and he has swivels in the biceps. The torso swivels at the waist, has an ab-crunch hinge, and the neck has both a ball joint and hinge. 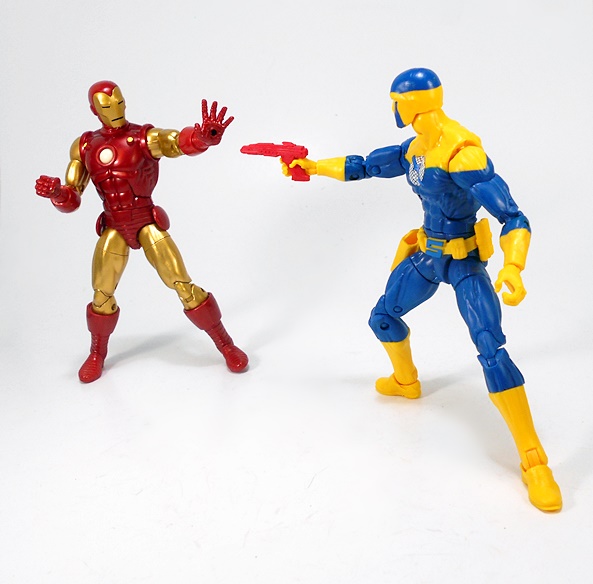 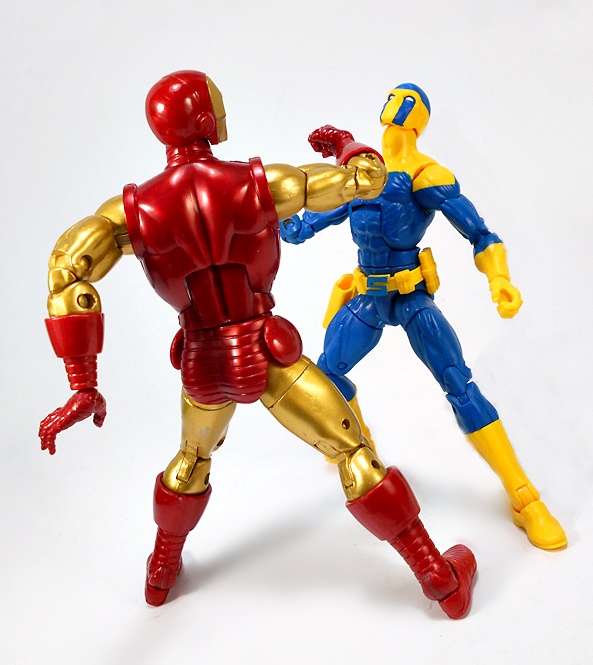 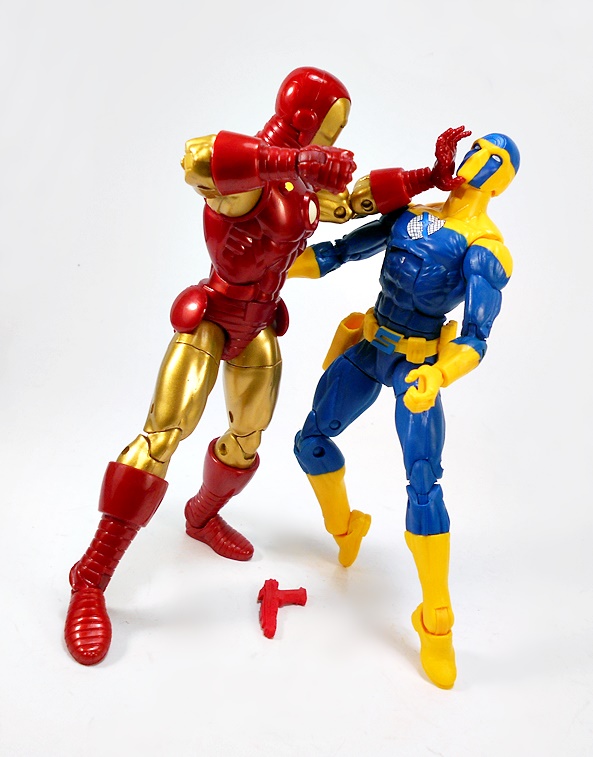 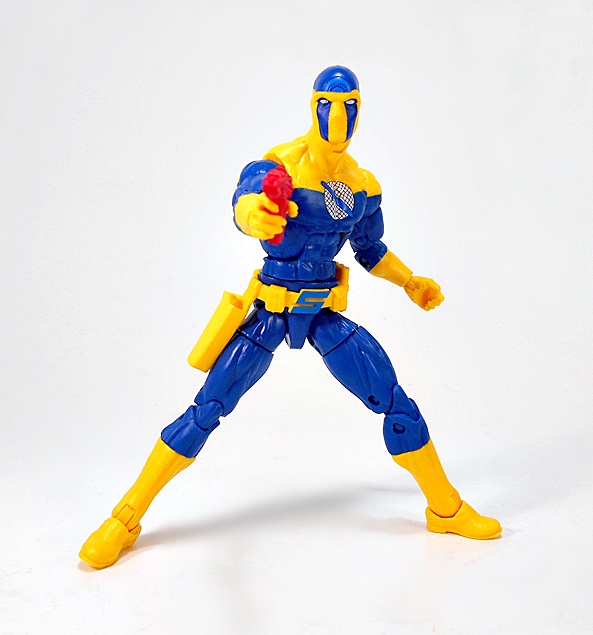 I’ve seen more than a little bit of hate for this figure, but you won’t get any of it from me. Spymaster has a cool history and a look that just screams comic book costume. The only reason I say that I wish Hasbro went for the silver and black costume is because I can’t imagine them ever doing this character again. And that’s it for the comic-based figures in this wave. Just two more to go, and they’re both from the Black Widow movie, and I’ll dig into one of those next week!