Well, it was a bit of a reach but I managed to get through an entire wave of double-features! And that brings me to the final packaged figure in this Age of Apocalypse themed assortment… Dark Beast! So let’s have a look at him and then we’ll put together the Suger Man Build-A-Figure and put this awesome assortment to bed!

Here’s one final shot of the packaging with that wonderful David Nakayama character art on the side panels. Dark Beast is a big boi and so despite Sugar Man being made up of an unprecedented number of pieces, Beast still doesn’t come with a BAF part. He does, however come with Sugar Man’s hammer. OK, I guess that’s kind of a BAF part. 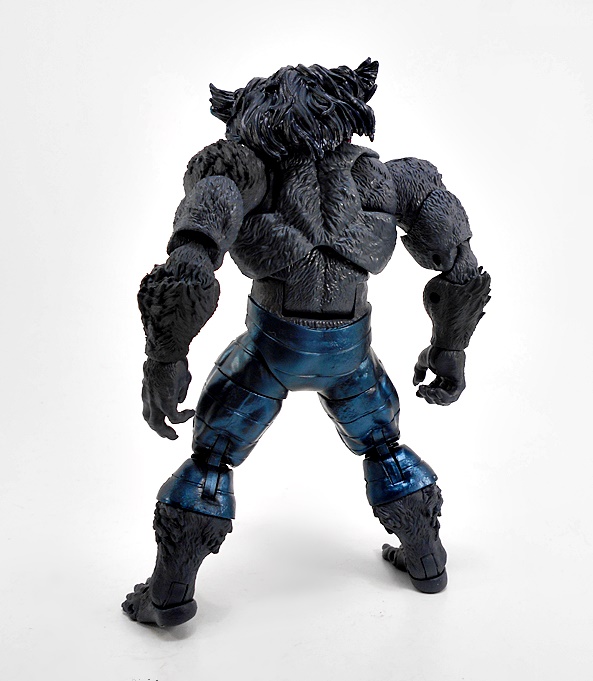 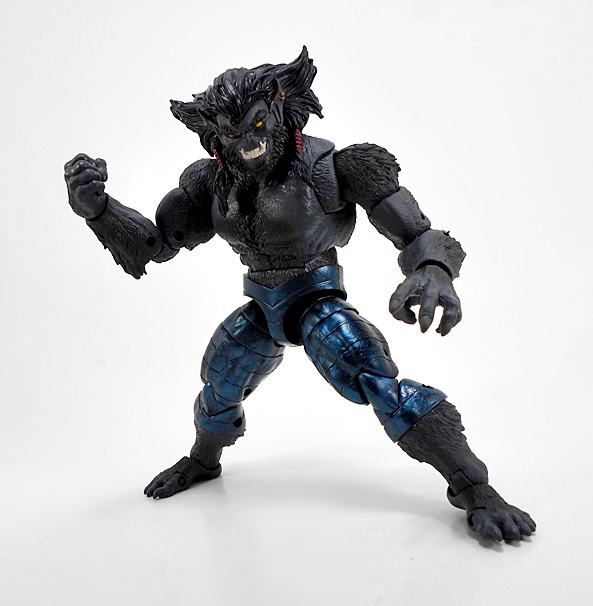 Beast is probably my favorite alternate-timeline character from Age of Apocalypse. Missing out on Xavier’s kind teachings, he lives up to his name by leading horrific experiments in the name of Apocalypse! He’s almost the complete opposite of the McCoy we all know and love, possessing all of his intelligence and none of his ethics and nobility, and that makes him all the more terrifying to me. If you were expecting a straight repaint of the Beast body from the Caliban Wave, prepare to be a little surprised, as this figure represents Beast after he got rejuvenated by Mr. Sinister and given some new legs. So the pelvis and the legs down to the swivel cut below the knees are segmented cybernetic legs and the rest of the body is borrowed from the previous Beast. You even get the extra hands too! The coloring is all around fantastic. Beast’s body is dark gray with a black wash to bring out some of that wonderfully sculpted hair and texture. Meanwhile the legs have a deep metallic blue sheen. 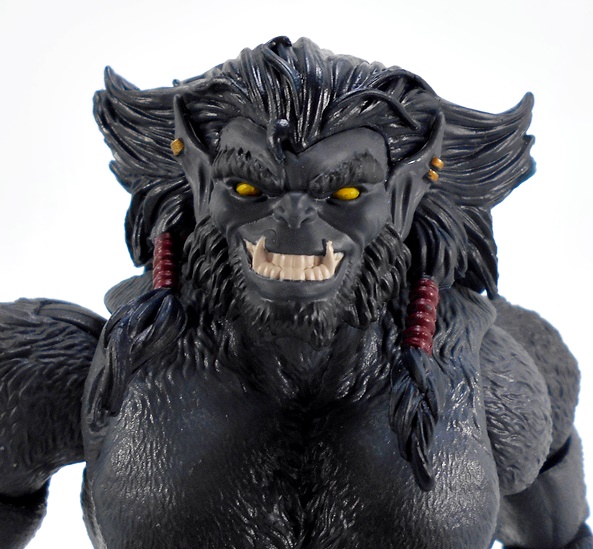 The other dramatic difference here is the new head sculpt, which is both awesome and bad-ass. He looks to be every bit of the bastard that he is. Complete with a sadistic grin, and a coif that would make Logan proud! He also has braided bands on his hair and some rings in his pointed ears, which frame his face and make him look a lot more savage. This head sculpt alone has rocketed Dark Beast up to my favorite figure in this wave. Sorry, Weapon-X and Jean, you guy shave been overthrown. At least you got to bask in the glory of being my favorites for a week. 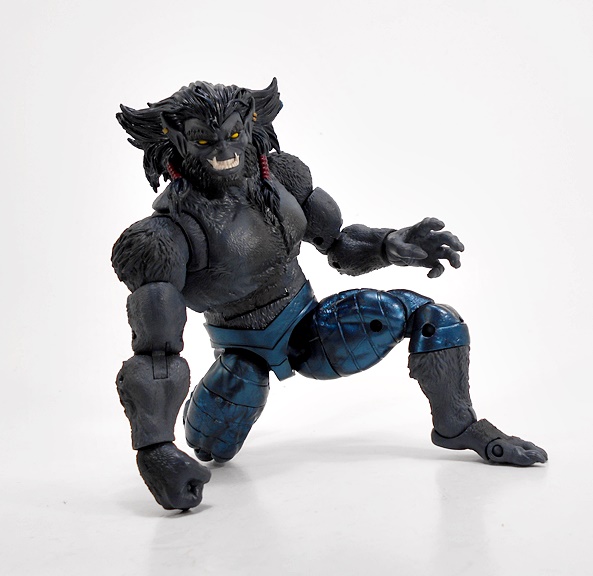 Despite some new parts in the legs, the articulation here is identical to the previous Beast, so I won’t go into details, other than to point out that with the shoulder crunches and the hinges in the feet, he’s one of the most articulated figures we’ve seen in Legends since the Toy Biz days. He’s just loads of fun to play around with and the extra fist and flat hand-stand hand add a lot of possibilities. And with all seven of the packaged figures out of the way, that brings us to this guy…

That’s it. That’s the review. They should have sent a poet, because I have no words… but I’ll try. It’s no secret that I love the Build-A-Figures, and there have been some truly spectacular ones going all the way back to Terrax. But they don’t often get character designs this imaginative to work with. I honestly don’t know what’s more impressive, the amazing work that Hasbro put into Sugar Man, or the fact that he exists at all. If you ever had cause to doubt that Hasbro was committed to this line… like if the 10,000 figures a year they release (minor exaggeration) isn’t enough proof, something like this should do it. Sugar Man is horrible, twisted, and almost certainly too demented-looking to grace the modern Big Box toy aisles. And yet here he is! In terms of construction, this is the most complex and atypical BAF we’ve seen in the modern line. As such it reminds me a lot of Toy BIz’s M.O.D.O.K. BAF. Sure, I could take this opportunity to ponder on why we got Sugar Man before M.O.D.O.K., but then I don’t want to question any aspect that went into the decision to make this guy. In terms of pure weirdness, if you’re going to top Sugar Man, Hasbro, you have to do an Egg Fu BAF. YOU HAVE TO!!!

Sugar Man’s hunched body is mostly obscured by his giant head. Indeed, from the front he just looks like a giant head on legs. The legs are puny by comparison, and while they’re fully articulated in every normal way, I didn’t find a lot of that articulation too value added. I was able to tweak them to help him stand, but that was about it. Other than his blue trousers, the only other element to his costume is a black belt and black suspenders. The belt has some crude silver buckles, and there are some colorful novelty buttons sculpted onto the right suspender. There’s also a loop for him to store his hammer. It’s tough to get it in and out of there, but I still think it’s a nice touch. Sugar Man’s four arms feature four unique hands. One is pointing, one is grasping, one is balled into a fist, and one is designed to hold the hammer. Each of these connect to the torso with rotating hinges, allowing for all the usual articulation in each appendage.

As for the portrait? I mean holy hell what can I say about this nightmare? His giant mouth is lined with jagged teeth and comes equipped with a lewd tongue that snakes out and looks absolutely disgusting. He’s got a broad nose, bushy eyebrows, two squinting red eyes and a bushy tuft of hair on the top. Hasbro did an absolutely fantastic job modeling this nasty piece of work in 3D plastic.

As already mentioned, Sugar Man comes with his Hammer, which is a Mjolnir looking implement with SUGAR sculpted into one side. He can hold it well in his lower right hand, but the bicep swivel isn’t up to the task of supporting its weight so it tends to flop if I don’t have the arm positioned right. 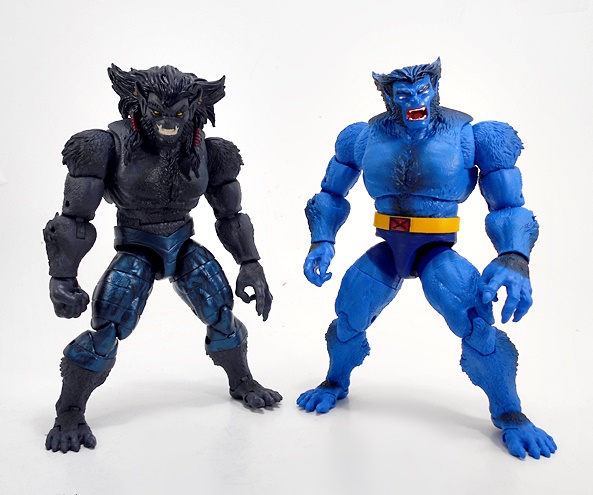 Wow, this wave was a treat and a half. Hasbro introduced some great new characters as well as alternate versions of some we got before. It’s been a while since I purchased an entire wave of Marvel Legends in one shot instead of hunting them down individually, but that’s exactly what I did here. I was just really eager to get my hands on all of these figures and put together the BAF, so it was nice to not have to hunt for a change. And this is the last regular Legends figures that I’m going to feature on Marvel Monday for a little while. Rather than dig into another wave, I’m going to check out some boxed sets and exclusives for the next few weeks.