The love that GI JOE has been getting these days is causing my heart to swell, and I’ve been doing my part to support the return of the Real American Hero in every way possible. Case in point, I probably have five or six AWE Strikers in storage and yet I simply could not resist picking up another one when I saw it on the shelf. I was also surprised to see that I had never reviewed any of the pass releases here, so this one got pushed to the head of the line. 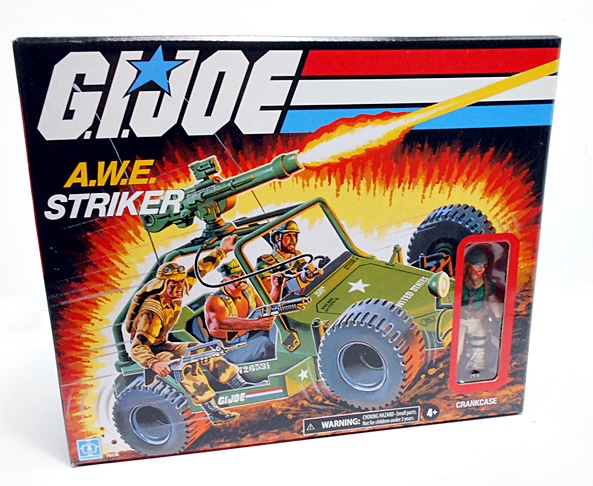 The original Real American Hero line had some of my favorite package art, and that’s really saying something, because the 80’s had a ton of toy lines with great looking packages. But the GI JOE stuff felt so iconic to me, even back then, and the action scenes on the front of the boxes and cards always made me want to play with the toys. This 2020 release of the AWE Striker mimics the original 1985 box quite well. From the artwork and window for the figure on the front to the filecard on the back, Hasbro nailed it. 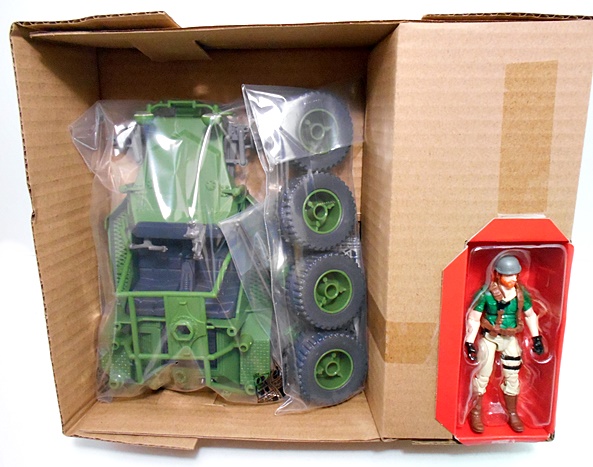 The box even feels like it’s made out of the heavier corrugate stock they used to use as opposed to the flimsy cardboard employed now. My only complaint is that Crankcase’s filecard is multi-lingual and rather abbreviated. Inside the box, the vehicle comes wrapped in plastic and in need of some assembly and it even includes a sticker sheet! But before I put it together, let’s have a look at the figure. 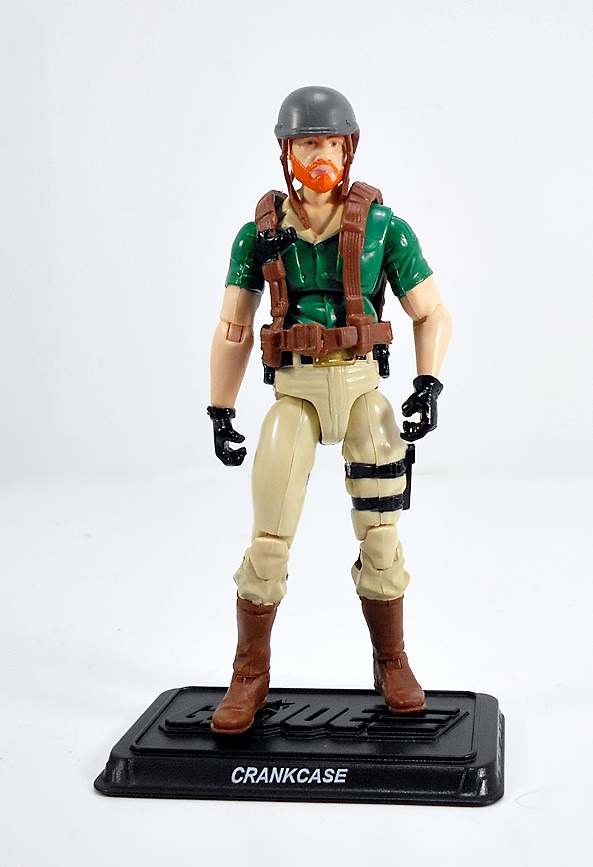 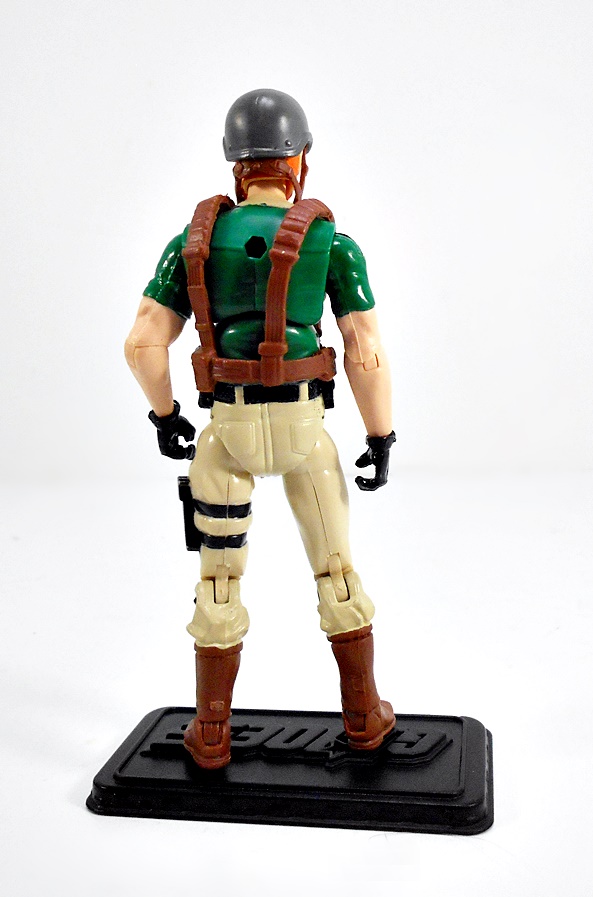 Crankcase is styled to fit right in with the modern JOES introduced in the 25th Anniversary Collection, meaning that they are a bit bigger than the vintage JOEs and a little better proportioned. I’m thrilled they went this way because I don’t think they plan on releasing a lot of figures in the Retro line and so these toys can just slide right into my existing collection. Heck, Crankcase even comes with the same style of personalized stand that we got with those 25th Anniversary figures! I’m happy to say that this new figure’s design sticks close with the ’85 version of Crankcase. He has the same green top, with sleeves rolled up, black gloves, khaki trousers, and brown boots. He also has brown web gear, which is removable, although the gun sculpted in the holster is not. And that’s the only shame about this figure: He doesn’t come with any weapons. 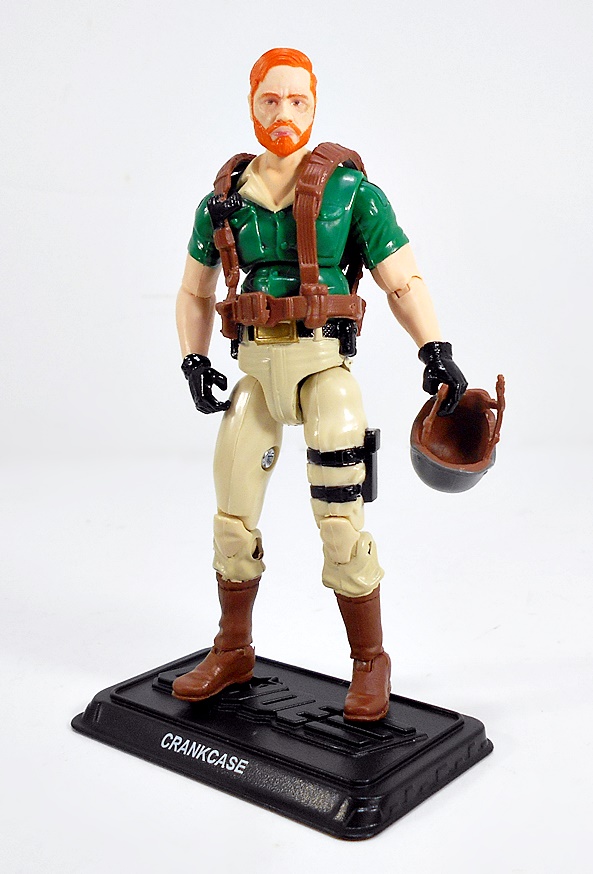 He does have a removable helmet and an excellent head sculpt. The detail is great and his orange hair color matches that of his predecessor. The only big difference is this version has a beard, where I’m pretty sure ’85 Crankcase just had a mustache. OK, let’s move on to the AWE Striker…

The required assembly is quite simple. You just have to snap on the roll cage, attach the wheels, and pop on the cannon, antennae, and a hose. Then slap on the stickers and she’s good to go! It’s hard for me to think of a more versatile and fun vehicle for the JOEs. Oh, there were plenty of vehicles that I liked more, but you’d be hard pressed to pick a better all-purpose way to get your JOEs into trouble. 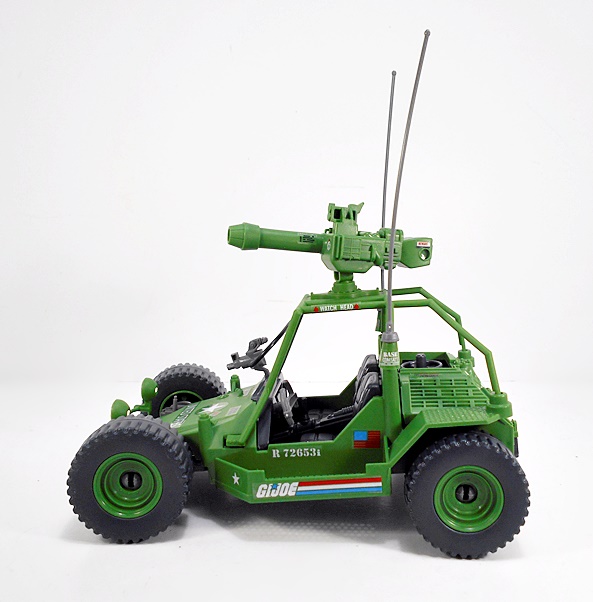 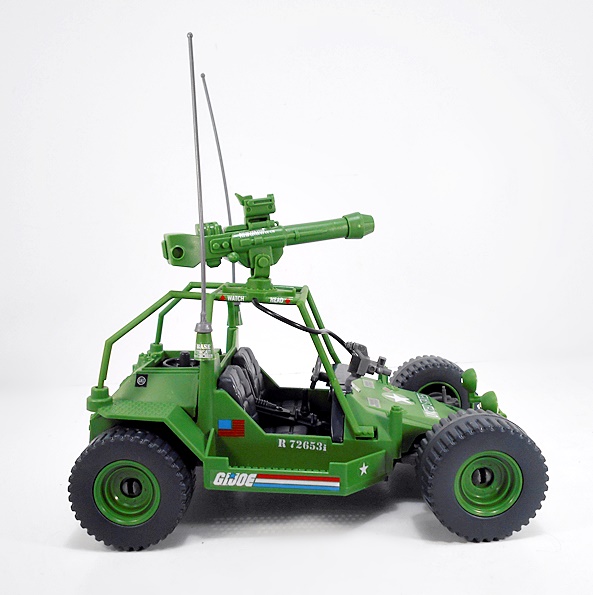 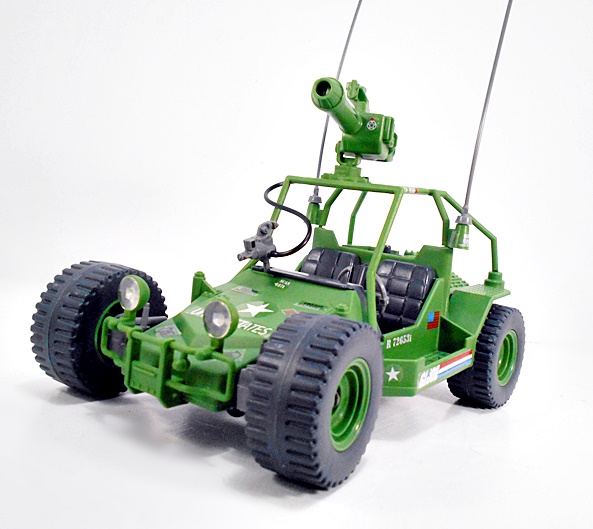 It’s been a long time since I played with the original toy, but this one looks like the spitting image of what I remembered. Is it the same mold? That I couldn’t tell you, but it is date stamped 1985 on the undercarriage. I can say that it looks nearly identical to the 25th Anniversary release, with the most notable change being the color of the seats. [Sadly, I don’t have easy access to that vehicle right now, but I do plan on digging it out of storage in the near future and I will update with comparison shots when I do!] Either way, I cannot overstate how impressed I am with the detail on this vehicle. For what is a rather small and inexpensive toy, the designers went absolutely crazy making sure every little bit was crafted with a sense of purpose and realism. 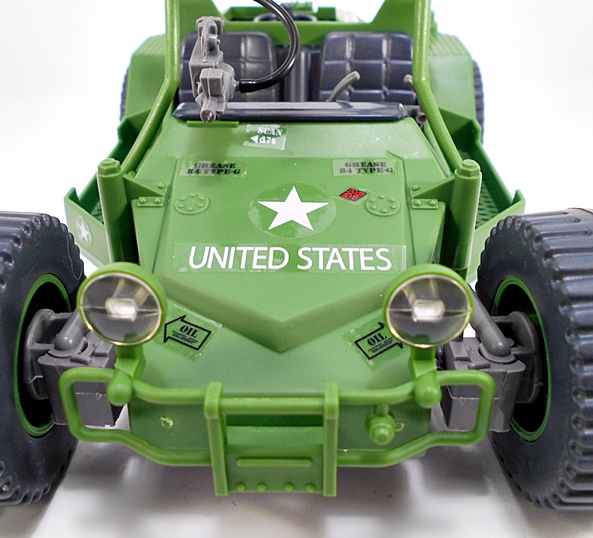 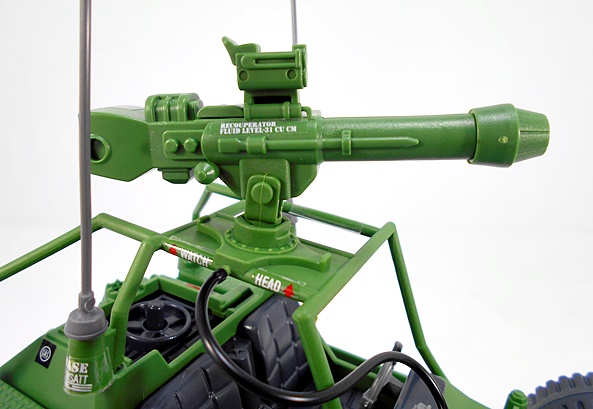 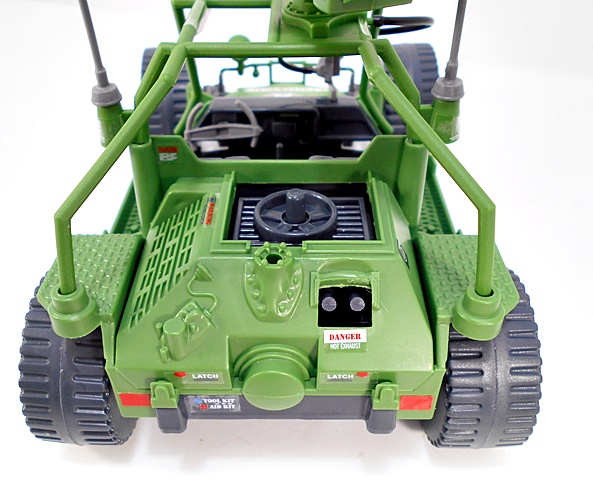 For starters, the AWE Striker has a working suspension, which you can test just by pushing down on the chassis. The front wheels do turn, as does the steering wheel, but they are not linked together. The front ramming bar has two headlamps with clear plastic on the fronts, there are mesh running boards on the sides for JOEs to ride on, and the engine cover can be removed to show a very detailed engine under it. That’s a nice touch if you want to have your JOEs performing maintenance or have it blown off by a direct hit from a Cobra weapon.

The cabin has sculpted padding in the seats, a static shifter, and the passenger side has a targeting camera which connects to the cannon on top with a hose. The cannon cannot only rotate, but also pivot up and down a bit, and I can’t say enough how happy I am that Hasbro resisted putting a giant missile into this weapon. Indeed, there are no play gimmicks, no bells or whistles, no lights, just pure 100% fun!

The AWE Striker set me back $24.99 at Walmart and I think that’s a great value. The craftsmanship on display here is top notch and with a figure included, you’ve got everything you need to go on some adventures in the backyard. You’re even better off if you can dig out three 25th Anniversary figures and load this puppy up! Sadly, this vehicle sold out damn fast on Walmart’s site and my store hasn’t restocked. I was smart enough to pick up two of the HISS Tanks (review coming soon!), but I really wish I had grabbed one more of these as well!