Happy Happy Halloween, folks! Well, for tomorrow anyway! This year, I was patient enough to put something away until October so I could have a special review for the occasion. And what better item than this celebration of the twisted novelty company, Silver Shamrock from Halloween III!! It’s well known that this flick did not get a lot of love when it was released, and that’s understandable, as it was an attempt to reboot The Shape’s own franchise into an anthology series, writing him out of it. As a teenage horror hound, I was obsessed with this movie when I first caught it on cable, because it was so damn dark, demented, and batshit crazy. It’s got stolen ancient ruins, an evil corporation, killer cyborgs, and Celtic magic amplified through modern technology! It plays out like part mystery-suspense thriller and part horror film, with a dash of sci-fi thrown in for good measure. And as much as I love Michael Myers, I still enjoy Season of the Witch more than probably two-thirds of the Halloween sequels. Of course fast forward to today and the movie has grown into its own and developed a decent cult following, but that’s a given because if it didn’t we wouldn’t be talking about Halloween III merch 38 years later. And who else to bring it to us but NECA. I’m still kicking myself for not picking up their Tom Atkins Night of the Creeps figure to stand in as Dr. Dan Challis and display with these guys. Maybe I can still pick it up on Ebay. HOW MUCH!?! Well, f’ck me!!!

NECA loves to wow collectors with presentation without going too over the top, and the packaging here does indeed wow me. This set really does feel like something that could have been offered as a special Convention Exclusive. The box has an illustrated sleeve with the film’s logo on the front and the Silver Shamrock logo on the back. There are also illustrations of The Big Three masks on the side panels. Otherwise what we get here is understated and all in black. 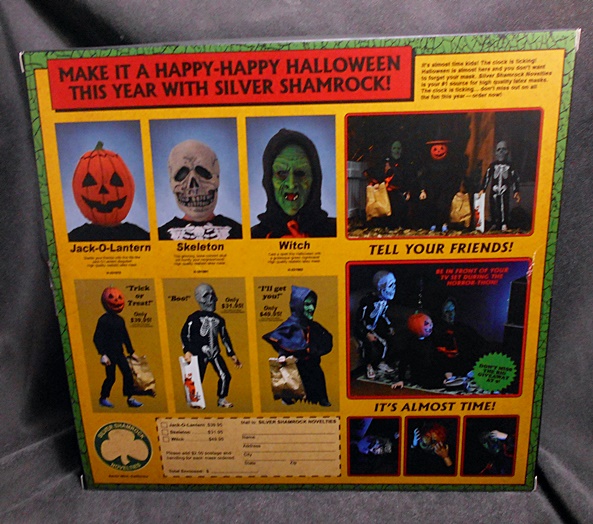 Pull off the sleeve to reveal the box inside and you get an advertisement for Silver Shamrock masks on the back, reenacted with the figures and accessories. This looks exactly like something you would find in the pages of Fangoria magazine back in the day. There’s even an order form to clip out! The front has a window that shows you the Trick-or-Treaters, each wearing one of The Big Three masks, and their accessories all laid out. I’m not sure whether NECA considers these part of their Retro-MEGO-Inspired line, as they are fully articulated bodies wearing softgoods clothing. but the packaging and wealth of extras make these feel more like their Ultimates series to me. I guess it doesn’t really matter either way. Let’s open this thing up and we’ll start with a look at The Witch!

The Witch is the most unique of the three as he’s wearing a sort of satanic gown. The body is covered in a black robe with a jagged cut at the bottom and cuffs of the sleeves. There’s a smock-like piece that covers from his neck down to his waist. This garment has orange borders and some orange ribbons tied just below his neck. The hood is sculpted in plastic, to show that it’s part of the mask, although it could be removed if you wanted to. The tailoring on the costume is very well done and it fits the figure well. The gown is a little snug, but I can still get some decent movement out of the figure beneath it. The ribbons are a bit much, and I may wind up retying them and snipping them down a bit. I really appreciate the work NECA put into sculpting the shoes, as each figure has different style shoes as a sort of reminder that these are kids wearing Halloween costumes.

As with all of the masks in this set, The Witch is a real work of art… warts and all! The sculpt and paint are everything I expect from NECA’s craftsmanship and attention to detail. I especially like the paint around the eyes that show a bit of the kid’s face and eyes behind the mask. Yeah, technically the hood part of the mask was actually fabric in the film, but I think they went the right direction going with plastic as it’s just easier to manage. Besides, it blends pretty well with the cloth outfit. 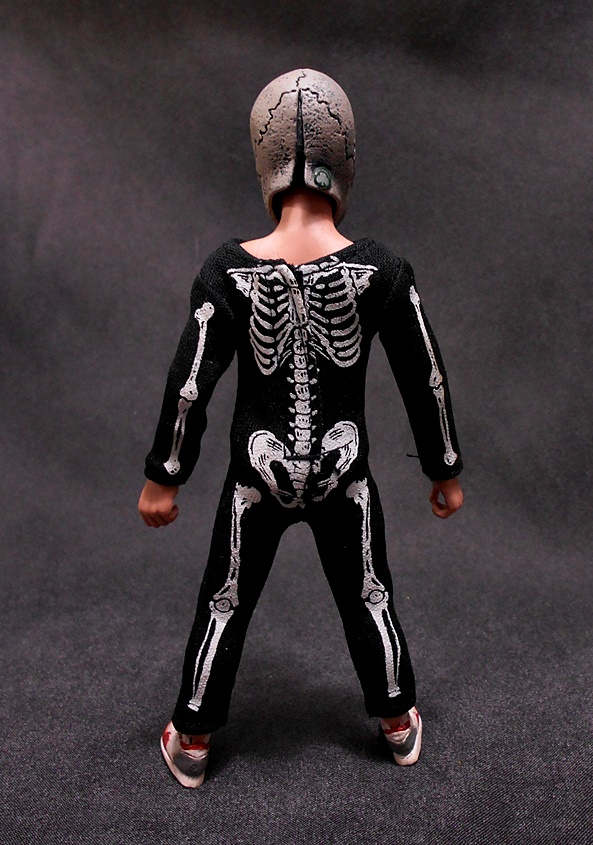 Next up is The Skeleton, wearing a black jumpsuit with a skeleton printed on it and a pair of sneakers! This little guy looks great! This figure really emphasizes what a great idea it was to go for softgoods outfits, as the effect really does look like a kid wearing a costume.  There are a few loose threads here and there, but otherwise the tailoring on the costume is excellent and the printed bones look especially nice. 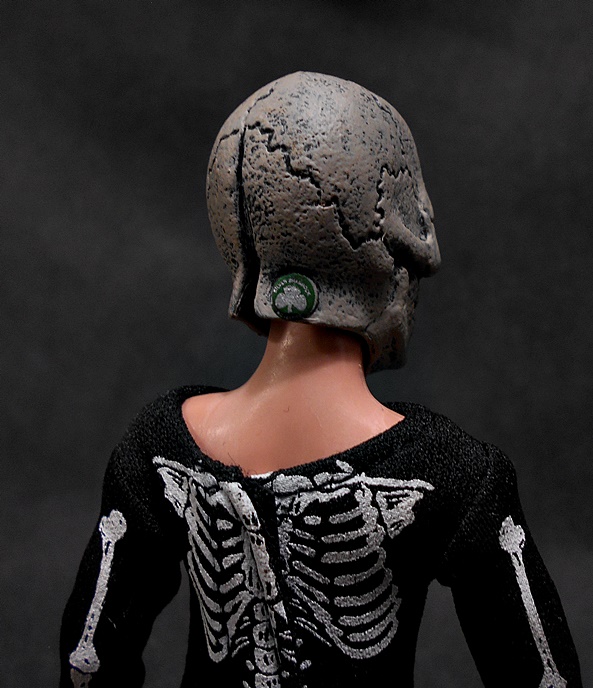 The Skeleton mask is a beautiful sculpt with some crazy attention to detail. The cracks and fissures and pitting just goes to show you that Silver Shamrock made some great looking masks. I especially like the slit in the back allowing for it to be put on over the head. All three masks have the deadly Silver Shamrock tag, made with the shavings of ancient Celtic magic stone baked right in! It’s perfect for transmitting those child-killing techno-druid-magic signals! GOD I LOVE THIS MOVIE!!! I can’t help but admire how NECA was able to get such tiny printing on that tag and still have it be readable. If I were to make a little gripe, it would be that I’m pretty sure when Dr. Challis is captured and has the mask on him you could see his eyes through the holes, but here you can’t.

And last up is the Jack O’Lantern (or is that Jack O’Lantern Witch?) and he’s always been my favorite of the three masks. I would have killed to own a replica of this one when I was a teenager. Of course, now I’m grown up and they are available, but I’ve yet to pull the trigger. Maybe someday! This costume is basically the Skeleton jumpsuit without the skeleton printed on it, but once again we get a different pair of shoes  Yeah, of all three costumes, this is kind of the laziest, but at least the kid added a hat for good measure. 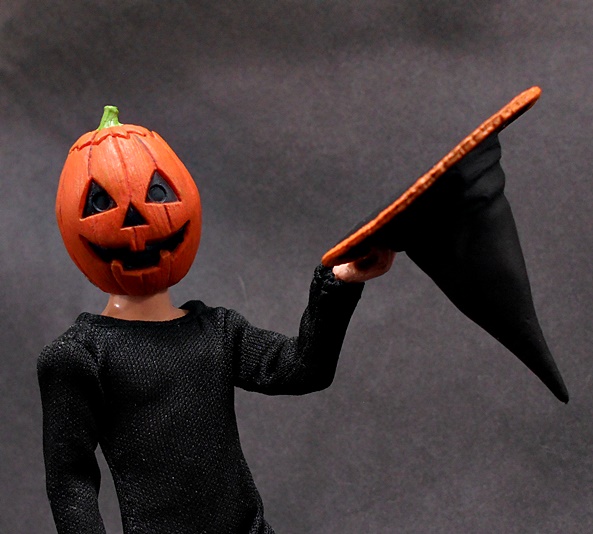 Yup, the Silver Shamrock mask was just the pumpkin, but later in the movie we saw an enterprising young trick-or-treater add the witch hat, so you can go either way since the hat is removable and simply pegs into the stem on top of the mask. From behind we can see the Silver Shamrock tag, but what’s this? They cheaped out and didn’t add the slit in the back like they did on the Skeleton mask? Nope, they got it right. That slit wasn’t on this mask in the movie. I do wish they had included the pirate hat that we saw one kid wearing on top of this mask in the flick, but now I’m just getting greedy. 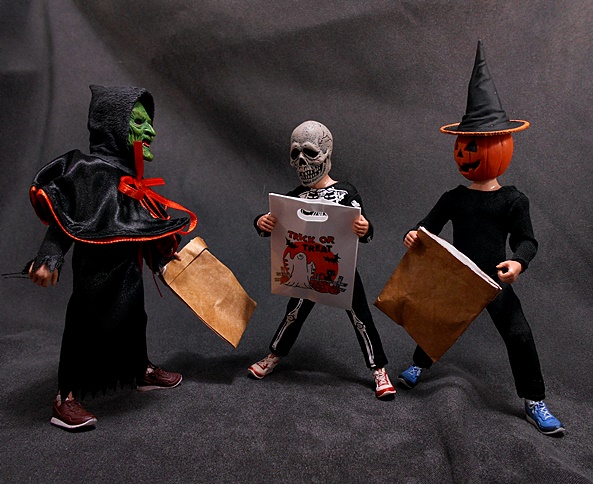 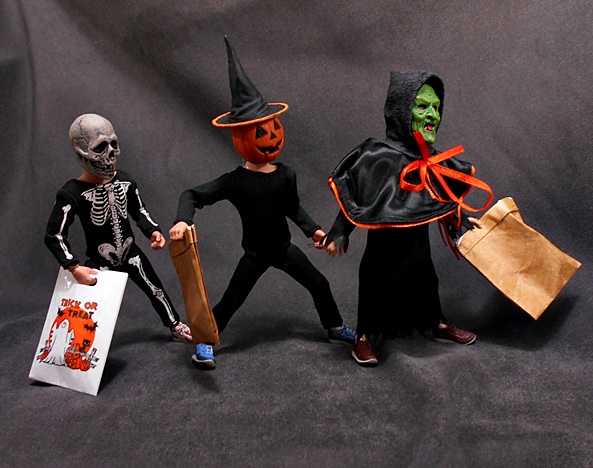 Each of the figures comes with their own Trick-Or-Treat bag. If we’re going by the Ad on the back of the box, Skeleton gets a fancy printed one, while the other two just get paper bags. The printed one is laminated, while the other two feel like real paper bags. It helps to crinkle them up a bit to make them look more authentic. With a little patience, they can hold them fairly well. Of course, this year, Halloween is more about tricks than treats, because when the kids gather around their TV’s to watch The Big Giveaway with their masks on, their little heads collapse into nests of snakes and bugs! Naturally, NECA included alternate heads to depict this horror! 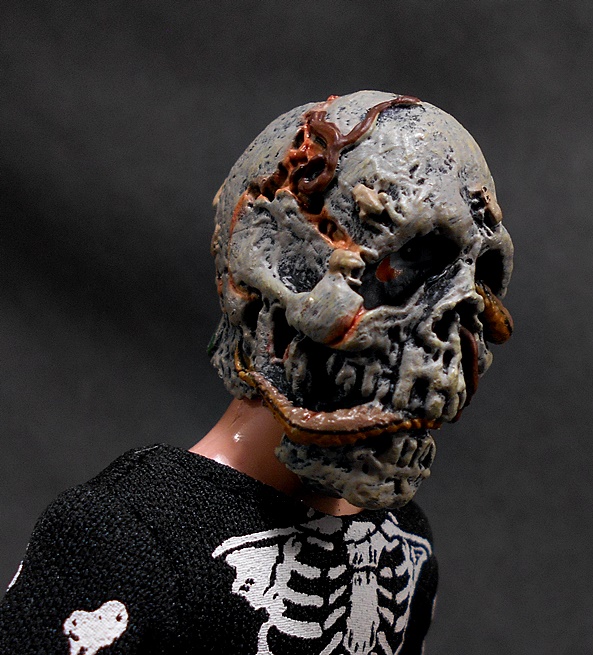 JESUS CHRIST!!! If these aren’t pushing the limits for toys… Oh, that’s right I mean Adult Collectibles! The masks all show evidence of deteriorating with strategically placed snakes coming out of mouths and eyeholes. What’s really creepy with these is if you look close enough you can see the kids eyes behind at least one of the eyeholes. It’s grizzly stuff!

NECA also included a television with a lenticular sticker on the screen that alternates between The Magic Pumpkin and the Silver Shamrock logo. If you have a keen eye, you can see that this is a repaint of the television included with their Nightmare on Elm Street accessory set from the “Welcome to Prime Time, Bitch!” scene. I never did pick that set up, because we didn’t have any figures of the victims to display with it, but either way, this was a clever bit of recycling on NECA’s part and it’s a great looking piece. Each figure also comes with a second pair of hands made to grasp at their heads in pain as they die horribly. FUN! 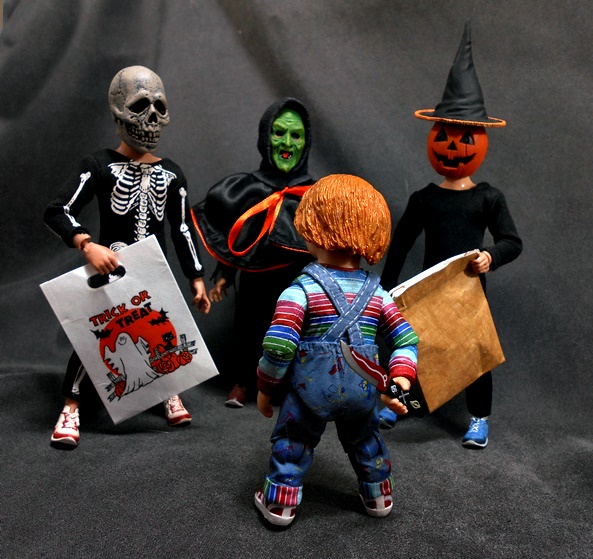 If you can’t tell, I really love this set, and I appreciate NECA for giving us stuff like this. Again, we’re talking about a cult movie from nearly four decades ago, and here we are getting action figures from it. NECA is one of the very few companies out there doing this on a grand scale. I personally haven’t seen this set in a Target or a Walmart (maybe it was a little too much for them), but the point is that a lot of their similar products are hitting big box retailers and that’s a wonderful thing. With that having been said, it gives me a heavy heart that I’ve been unintentionally neglecting NECA reviews around these parts. This is my first NECA review since early July, and I was shocked to see that I’ve only had three NECA reviews this entire year. It’s not that I’m not buying the figures, but with only three reviews a week and so much to look at, NECA has sadly been overlooked lately. I’ve got to fix that, and start giving them their due!