For decades, Hasbro has skirted their obligations to Bumblebee’s true heritage by not making his alt mode into a VW Bug again. Sure, some of that came from his change into a Camaro in those shitty movies, but even before that, it seemed like Volkswagen wasn’t interested in licensing to them, or maybe Hasbro wasn’t interested in paying out. Either way, we had to wait for the Takara Masterpiece figure to see Bumblebee once again strut his stuff as a Classic VW Bug. But all that’s behind us, as the last movie made him a VW Bug again, and I guess that’s something good to come out of that mess of a film franchise. Maybe that paved the way back to the figure I’m opening today. Jeez, when did Transformers toys become so complicated? Anywho, I can hardly believe that it was all the way back in June of last year when I reviewed Earthrise Cliffjumper. Damn, it feels like it was only a few weeks ago. I remember doing a lot of nitpicking, but ultimately being pleased with that figure. I also remember imagining how they were going to rework him into Bumblebee. Well, they did. And we’re going to look at it. Today. Let’s go! 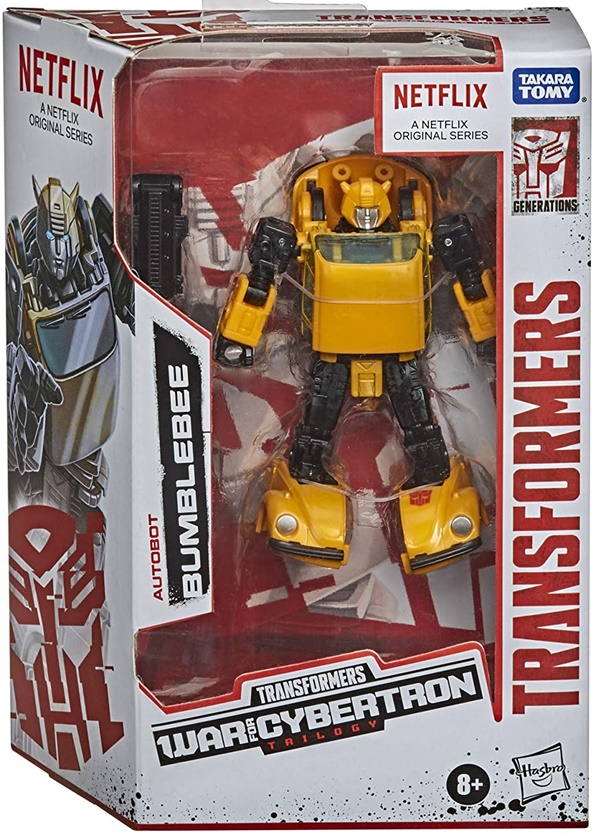 Bumblebee is part of the Netflix Series tie-in, which is calling itself the War For Cybertron Trilogy and these figures come in white boxes. Yeah, it’s kind of weird to get Bumblebee in this mongrel off-shot, sub-series, but whatever. Once I throw out the package, this figure will fit right into the Earthrise or Kingdom series. And after a few generous pours of my friend Jameson, I won’t even know (or care about) the difference. Speaking of alcohol… I’ve tried watching the Netflix series, but I couldn’t make it through the first season, despite really wanting to like it. I decided to embark on the second season armed with a bottle of liquid courage, but all it did was make extra sad and depressed. The animated models look great, but the grimdark atmosphere is kind of stifling and I’m not a big fan of how they choose to portray some of the characters. But none of that makes this figure any less welcome and I’ve ranted on long enough. Let’s look at the damn toy! Like Cliffjumper, Bumblebee is packaged in the Deluxe assortment class, but he is much smaller than your average Deluxe. We’ll start with his alt mode! 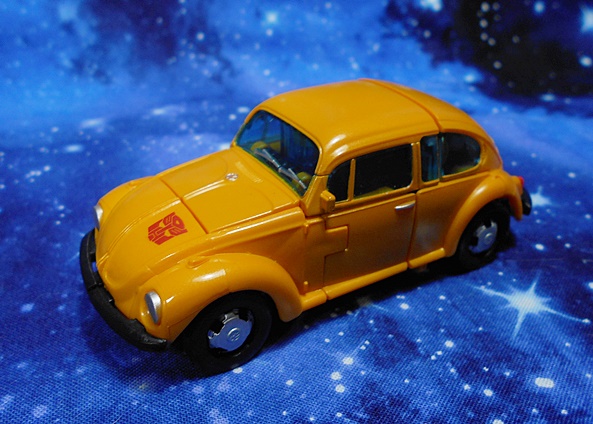 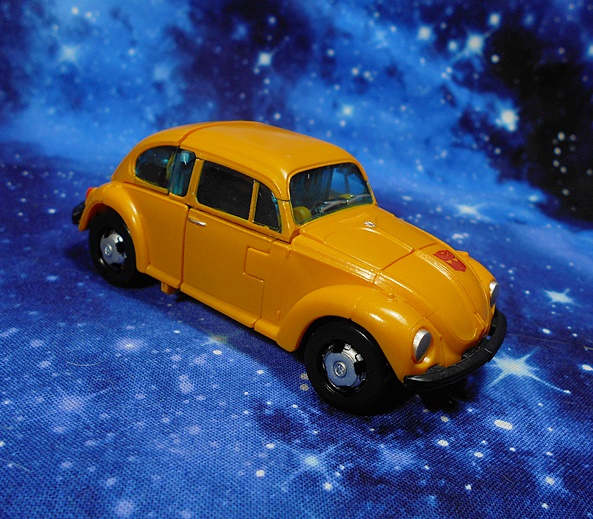 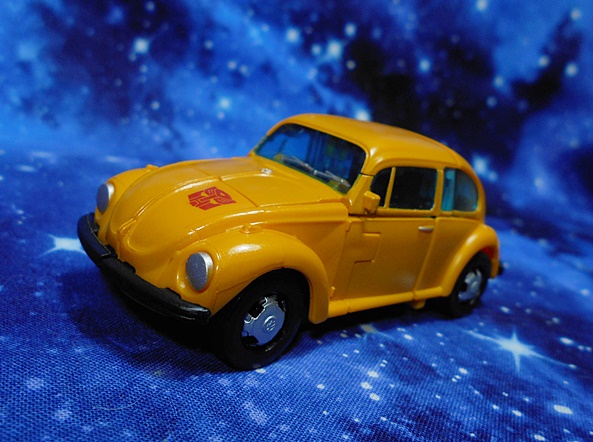 OH, MY BEAUTIFUL DIESEL-POWERED DEUTCH BEAUTY!!! With no practice in a long while, I was worried Hasbro might not be able to pull off a VW Bug as an alt mode again. I mean, even the G1 original toy wasn’t a proper Beetle, but rather a Super-Deformed version. This Bug looks like it might be a little longer in the hood area than is accurate, but I’m no expert and either way it’s not bad looking at all. Indeed, I absolutely love it! The car mode locks together quite nicely and while there are some unsightly seams where the panels link up, it’s nothing that I’m not used to by now. The chonky curves are gorgeous and it is indeed licensed as there’s a Volkswagen insignia sculpted onto the hood right in front of the windshield. There are lots of great little details in the scul;t, like the vents over the engine compartment in the rear, as well as additional air vents behind the rear side windows. I can even make out the handle on the front of the hood. Great Primus, it’s so awesome to see the little guy’s alt mode return to his roots.

The Bug makes use of a rather deep yellow in terms of plastic and paint. The painted areas match the plastic quite well, and even has a bit of a metallic sheen to it. I love that, because sometimes the yellow plastic Hasbro uses tends to look cheap, but not here! The yellow also looks great next to the blue-tinted transparent windows. Some other paint flourishes include silver paint on the wheels, the headlamps, and even the windshield wipers and door pulls. The tires are black and so are the front and rear bumpers. And finally, you get a little red on the tail lights and an Autobot insignia stamped offset on the hood. What? You want me to complain about something? Fine! I wish they had detailed his license plate instead of just leaving it blank. Happy? 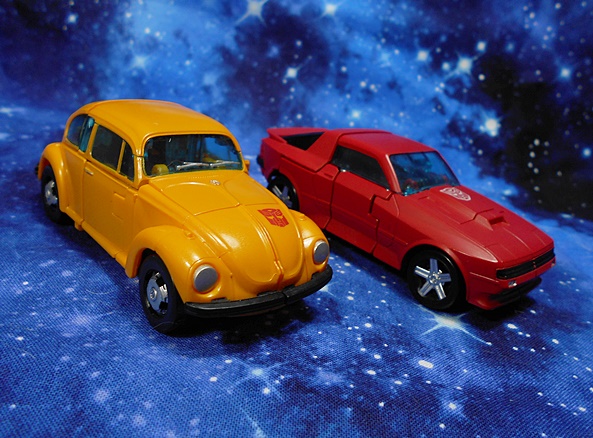 Bumblebee comes with the exact same giant bazooka as Cliffjumper, which means it can be broken down into parts to convert Bumblebee for water travel. This entails using the bipod for skis under the front wheels, using the tubes as pontoons, and the back piece as a stabilizer on the undercarriage. I liked this feature on Cliffjumper a lot, and I still like it here. On the other hand, Bumblebee lacks the port on top that Cliffjumper had to properly weaponize his alt mode, but that’s not a big deal for me. So, the alt mode gets a big thumbs up, let’s see how the robot mode turned out. 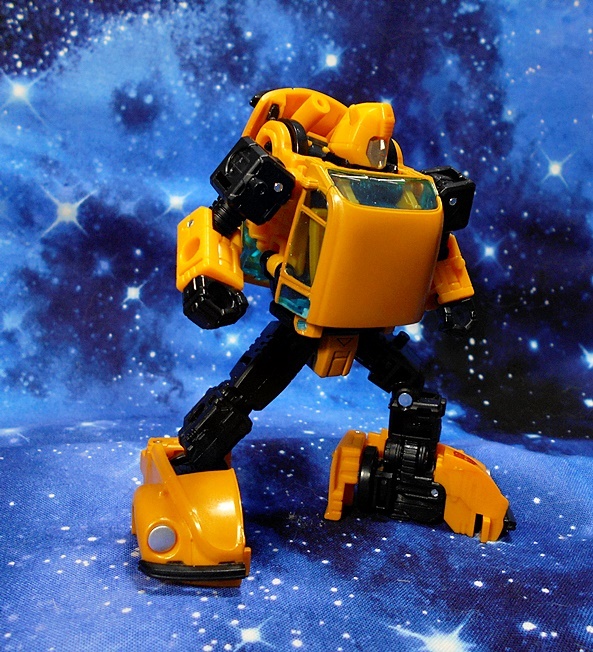 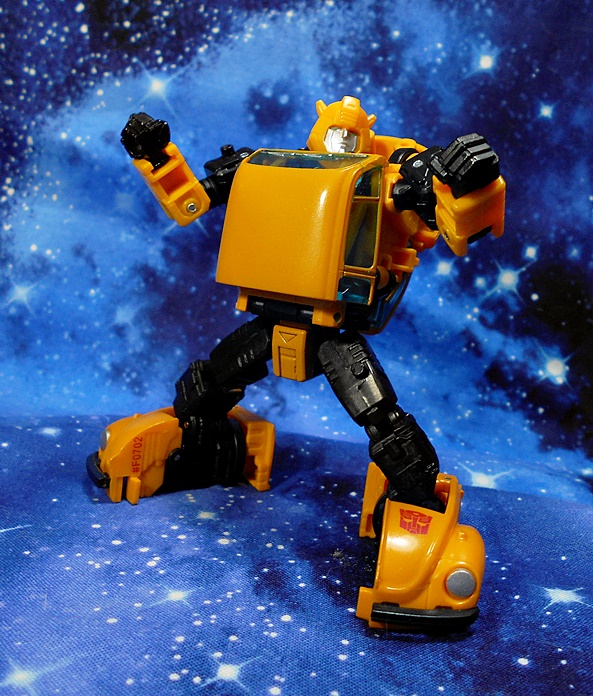 Not bad at all! Bumblebee transforms the same as Cliffjumper, which means you do have to take the back part of the car off in order to convert him. If that bothered you with Cliffjumper, it’ll likely do the same here. I’m not a huge fan of it, as I think it’s a cheat, but I’m willing to let it slide here because I really do love the resulting bot mode. Bumblebee sports a rather broad slab of chest, but I don’t think it works against the figure. His feet are still kind of big, but they don’t feel as bad as the giant clodhoppers that we saw on Cliffjumper. I remember calling out those cylindrical parts of the arms on Cliffjumper and saying how they look out of place on him, and that’s because they were always meant for Bumblebee here. Sure, he wears the back half of the car mode on his back, but as far as backpacks go, it’s not that bad at all. Indeed, I think it fills him out nicely.

The head sculpt is certainly on point! It would have been a shame to come all this way and not get the portrait right, but Bumblebee’s noggin turned out great. I would have liked the eye paint to be a little more blue and vibrant, but otherwise, I’ve got nothing but praise. From the horns on his rounded “helmet” to the silver paint on his face, Hasbro captured the character exactly as I always picture him.

I already pointed out that Bumblebee comes with Cliffjumper’s bazooka, and while it’s a damn cool weapon it feels out of place for this little guy. Fortunately, it can be broken down into smaller bite sized chunks. As smaller pistols, I think they work much better for Bumblebee. And if you absolutely don’t like the backpack and still want to use all the parts, it can be removed and turned into a shield, but I’ve never been a fan of that sort of thing. 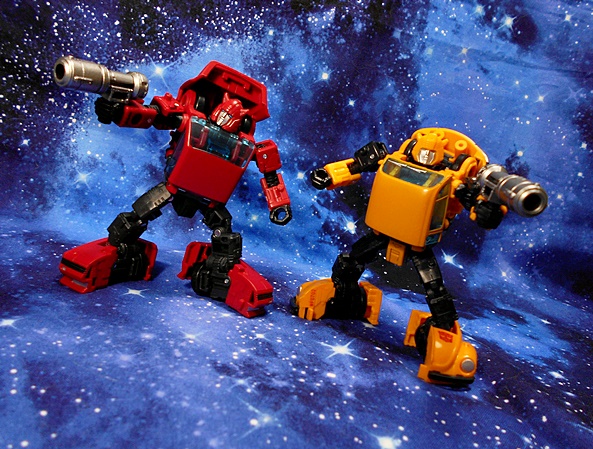 Maybe it’s the booze making me all emotional, but this tiny scrapper posing as a Deluxe Class figure has made me so damn happy. It feels like such a momentous release, finally returning Bumblebee to his roots and doing it with style. Both the alt and robot modes kick ass, and it’s doubly impressive that Bumblebee and Cliffjumper manage to be so distinctive while still sharing all the same engineering and internal parts. Even in the context of mammoth releases like Scorponok and Omega Supreme, this little fella stands out as one of my favorite Transformers releases of late. And holy shit, that’s saying a lot because Hasbro has been successfully beating the Transformers drum consistently and without fail. And by Primus, it’s a great time to be a Transformers fan!

One comment on “Transformers (Netflix Series): Bumblebee by Hasbro”