Oh man, Zorro has been around for a long time! Born in the pulp stories of the early 20th Century, his legend has lived on in film and television ever since. I don’t know how he rates nowadays, but Zorro was still a big deal when I was a kid. Granted, I was only two years old when Frank Langella donned the cape in The Mask of Zorro, but I remember years later my dad making popcorn and my brother and I watching it with him and having a great time. I also remember my brother having a really cool 12-inch action figure of Zorro, that he got while we were living in France. I used to beg him to play with it all the time, but he was having none of it. The best I got was to fight his Zorro with my 12-inch Kenner Indiana Jones figure. Whip vs Whip! Maybe it wasn’t so fair because Indy did have the gun. Anywho… Zorro had a bigger budget theatrical outing in 1998, and while I wasn’t a huge fan of that version of The Mask of Zorro, it was still good fun. On the other hand, I absolutely loved the swashbuckling cheese-fest that was the 1990 TV Series and it remains a guilty pleasure to this day! Needless to say, I was beside myself with glee when Boss Fight Studios announced that Zorro would be joining their new Hero HACKS line of 4-inch figures. The initial offerings include a single carded figure and a boxed set featuring Zorro and his horse, Tornado. Today I’m opening the single figure!

Zorro comes packaged in the same style as BFS’s Vitruvian HACKS, and that’s a very good thing indeed. The package offers the best of both worlds, with a colorful card and a collector friendly blister, so you can take him out and play with him and return him to the package for an awesome display piece. The landscape orientation of the cardback is quite distinctive and I love the artwork on the front. To the left of the character art, there’s a sizable bubble that shows off the figure and his extra goodies. As a side note, one of those extra goodies is a branded Hero HACKS figure stand, and as was the case with Flash Gordon, the pegs don’t fit the feet very well, so I had to make due with a generic stand for this review. Let’s check him out! 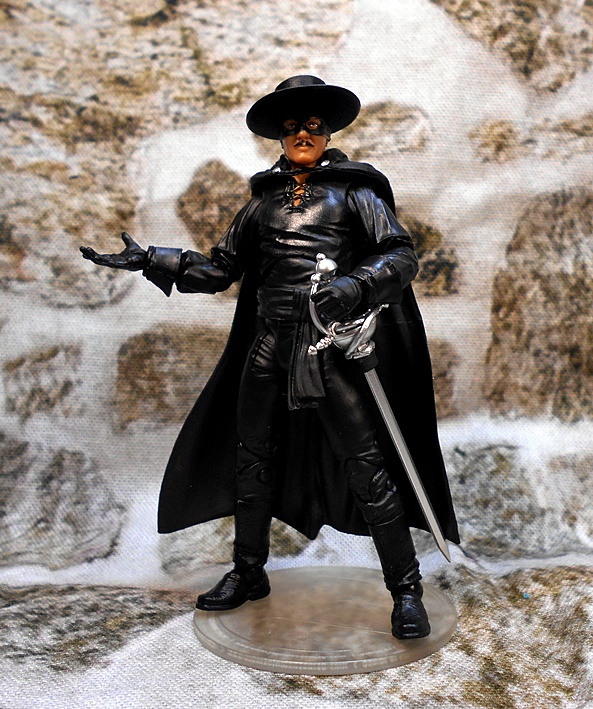 Presented in 4-inches of poseable plastic, Zorro looks as iconic as ever. The body features an all black outfit with sculpted rumples and wrinkles, high boots, and swashbuckling gauntlets. There’s a sculpted sash tied around his waist, and they did a particularly nice job sculpting and painting the laces at the collar of his tunic. The plastic cape fits around the figure’s neck and also has a peg that secures it into a hole in the back, along with two silver buttons on each side of the neck to offer a splash of color. Finally, there’s a loop hanging off his waist so that he can wear his sword, but more on that in a bit. For a figure that does not feature a lot of color or even a lot of overt detail, Zorro looks absolutely amazing. 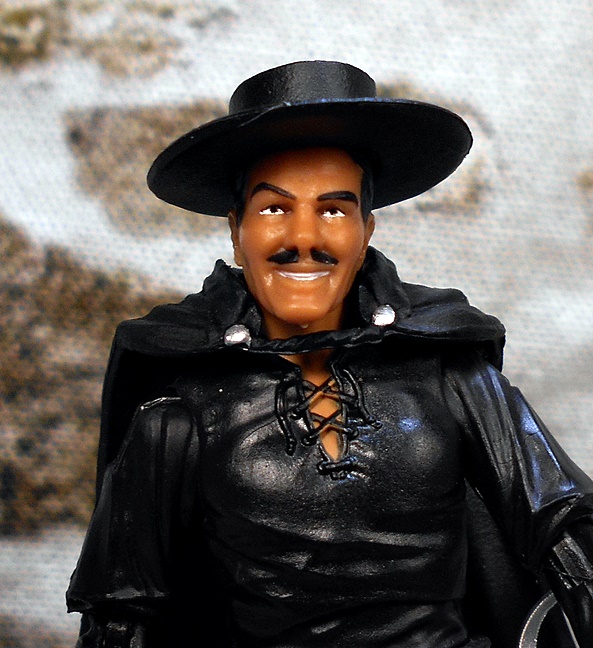 You get two head sculpts with the figure, one masked with an all-business expression, and one unmasked with a beaming smile. The broad brimmed hat is sculpted separately from the head and fits securely on either one. Both portraits are excellent with some nice detail in the mustache. I didn’t see a lot of value in the multiple heads included with the Hero HACKS Flash Gordon, but here I think the decision to include two was a fantastic one. 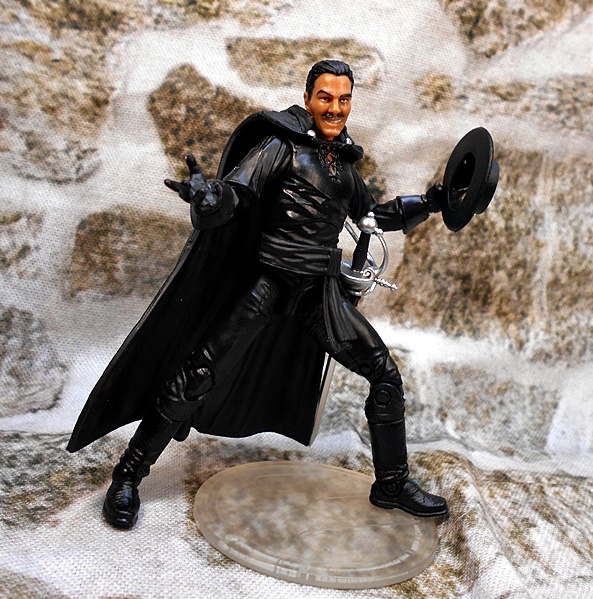 The articulation right in line with previous HACKS figures, which means a whole lot of hinged pegs holding the figure together. There’s a lot of fun to be had here, with some great range of motion in the legs and the shoulders. The elbows, on the other hand, only give about a 90-degree angle and that’s it, and I would have liked some swivels in the upper legs, but still overall not bad at all. The cape isn’t too restrictive, but it can be easily removed if Zorro needs to fight unencumbered. He also comes with two sets of hands, one pair for holding accessories, and one pair of open hands, which can be rather expressive. 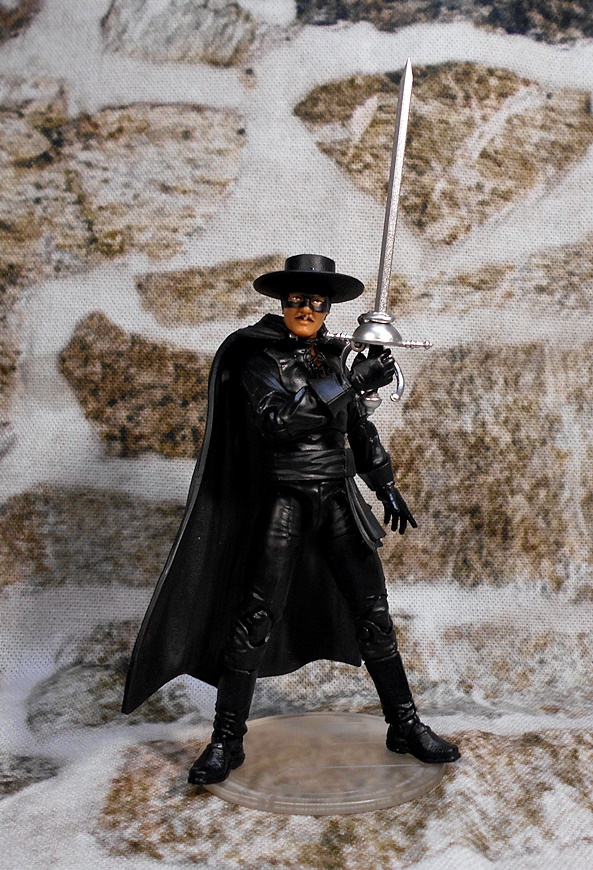 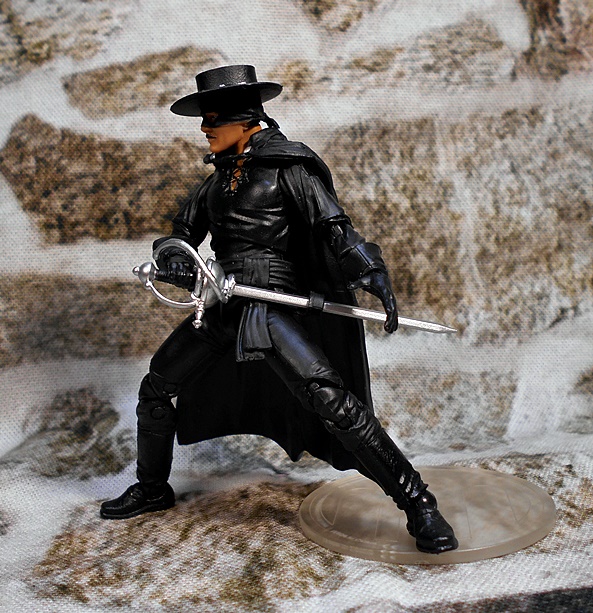 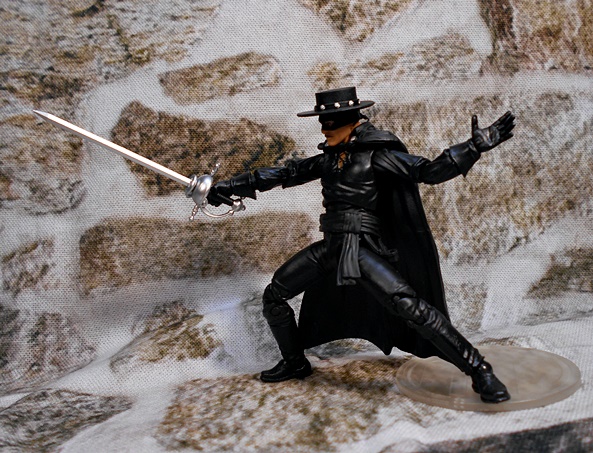 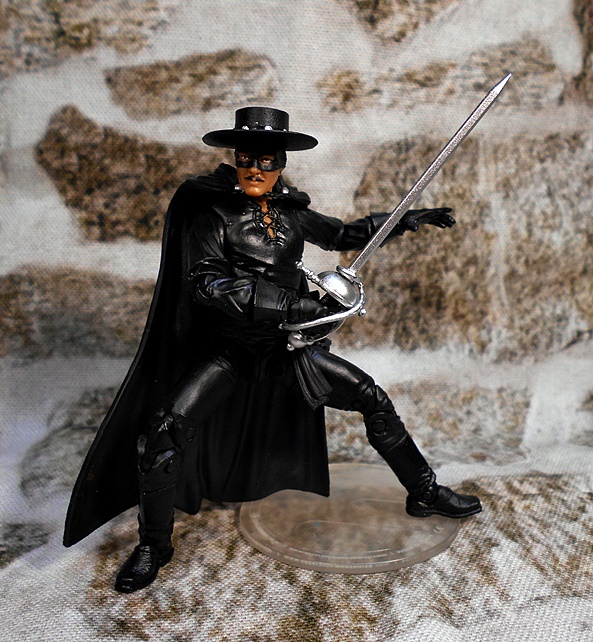 Zorro comes with his two trademark weapons: A sword and bullwhip. The rapier is an absolutely beautiful accessory. Yes, the hilt is a tad oversized, but it’s easily forgiven considering the complexity of the guard. I don’t think I’ve ever seen a sword of this type attempted in such a small scale and I have to say that BFS nailed it. The sword looks great both carried on Zorro’s hip or being wielded in either hand. In addition to the sexy curves of the hilt, the blade is stout enough to not be too bendy, and the silver paint on the guard and blade contrasts nicely with the black grips. One word of caution is the crossguard can bend a bit when worn against the cape, something I didn’t notice at first. Fortunately, I was able to straighten it out without any problems, but I’m not sure how many times that will work before it crimps and falls off. But, now that I know to be careful with it, it shouldn’t be a problem! 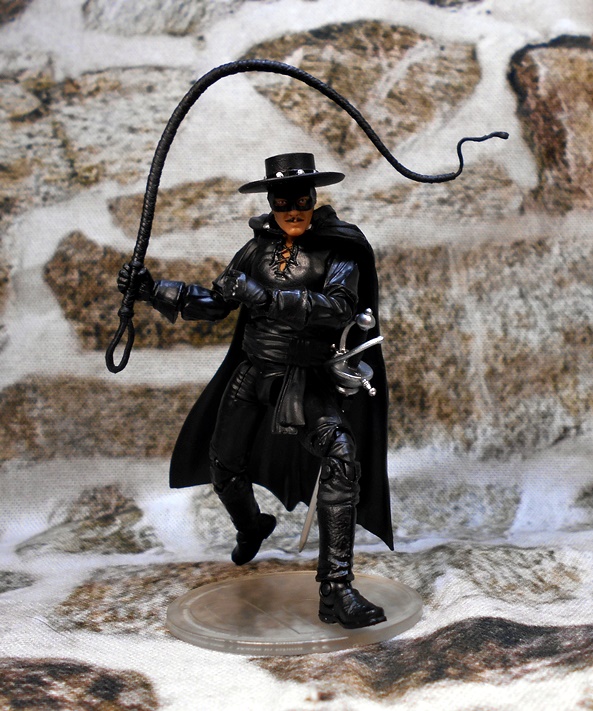 The bullwhip is fashioned from soft rubbery plastic, which will hold it’s intended form, but is also totally flexible. It features a detailed, braided sculpt with a loop at the grip and a frayed tip. It’s soft enough that it can be coiled, but it won’t stay like that on its own and Zorro can’t really hold it when it’s coiled up. For that reason, I would have loved to get a second version of the whip that was coiled and perhaps could peg onto his belt. 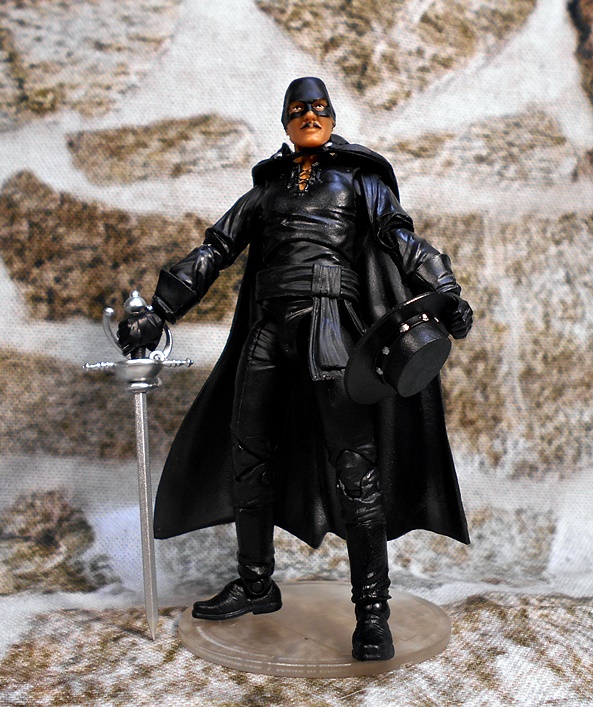 Hey, ya know what? I freaking LOVE this figure! I think it’s fab that Boss Fight took the opportunity of Zorro’s anniversary to get us some figures and boy did they deliver. The only downside here is there’s no one for him to fight. And quite frankly I doubt it’s in BFS’s plans to get us some Spanish soldiers. But that’s OK, as a stand alone figure he’s absolutely amazing. And playing around with this guy has just whetted my appetite for the boxed figure and horse. Chances are I’ll be opening that one for a review in the very near future!