With lots of Siege figures left for me to open, I’m trying to juggle these older reviews alongside the new Earthrise figures. Today I’m going back to one of my favorite characters from the G1 cartoon, Ratchet. It’s always a treat to get updates to Ratchet and Ironhide, because as a kid I was robbed of proper figures because their G1 toys were so damned weird. I was actually pleased with the CHUG versions when they came out, which just goes to show you how thirsty I was. I mean, Woof! Those haven’t aged well. Obviously Ratchet here is just a repaint/slight remold of Ironhide, which I reviewed a little while back, so some of this may feel like I’m covering old ground, but let’s take a look!

In kind of a dick move, Hasbro decided to make Ratchet a Walgreen’s Exclusive. Now, in fairness, he was pretty easy for me to find, so I probably shouldn’t complain, but I’m sure there are people out there who had problems because of the exclusivity. Bottom line, Hasbro… don’t be making important characters like my boy Ratchet an exclusive. Save that shit for Barricade. He was a cool figure, but not essential, IMHO. Anyway, despite being an exclusive, there’s no sticker or other indicator of that fact on the box. Naturally he comes packaged in robot mode, but let’s start out with his alt mode.

In vehicle mode, I expected Ratchet to be a straight-up repaint, but Hasbro actually did some reworking on his front bumper, as well as the area above and behind the tinted blue windshield, which is a welcome surprise. It’s not quite an ambulance light-bar, but it’s painted to resemble one. Maybe the Cybertronian equivalent, eh? The back panels are still kind of ugly and hollow, because they’re the bottoms of Ratchet’s feet, although if I try hard enough I can imagine that they’re supposed to be exhaust vents. Still, I’d rather it looked like he could open up to carry wounded Autobots. As for the rest of the vehicle, the white plastic looks good with the painted red panels, and the wheels are slightly more gray than white, which mixes things up a bit. The silver paint on the bumper head headlights looks good, as does the crisp Autobot insignia just under the windshield. You also get some brushed weathering near the back. It’s not an entirely different vehicle than Ironhide, but the subtle changes and the new paint job certainly sets it apart. 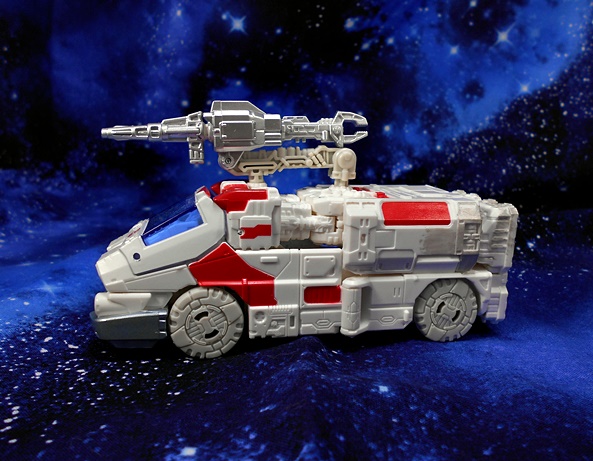 Hasbro also set Ratchet up with some new accessories, which can be used on Ratchet’s auto mode. He’s got a wrench-claw on an articulated arm, and a smaller gun, which can be part of the claw or mounted separately as a weapon. I dig both of these a lot, as it allows Ratchet to effect repairs while in his alt mode and laying down covering fire at the same time. I suppose the claw could also be used to grab hold of Autobots and drag them off the battlefield to safety.

As mostly a repaint, Ratchet transforms exactly the same as Ironhide. There is one nice surprise, however! The side panels don’t fall off like they do with my Ironhide EVERY SINGLE TIME I TRANSFORM HIM!!! Either way, Ratchet has a fantastic looking robot mode that’s well proportioned and just chunky enough to scratch my G1 itch. It’s not a dead-ringer for the original Sunbow character design, but it hits just enough points to make it work for me. Structurally, the only differences between him and his Autobot brother is the slight reconfiguration in the shoulders and the front bumper that rests behind his head. From behind he’s got a lot of hollow compartments, but he still manages to look rugged and sturdy. The deco doesn’t change much from his vehicle mode. It’s still mostly white with some red here and there.

The new head sculpt looks great, particularly with his rounded “helmet” and those big wings over his eyes. I like the features in his face, but I wish the face was painted silver to make it stand out a little more. There’s no light-piping in the blue eyes, but they still stand out remarkably well. 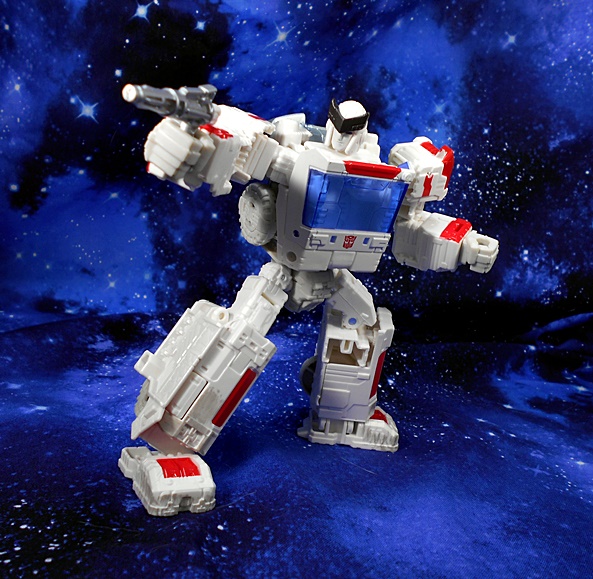 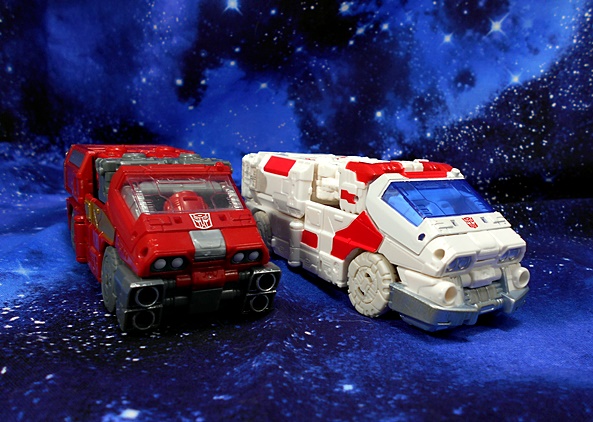 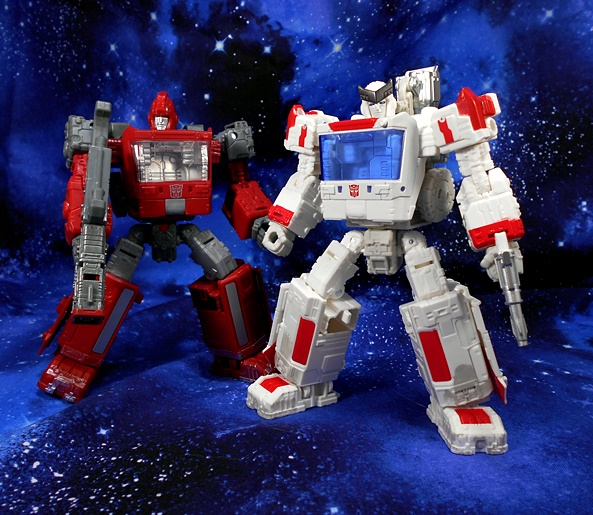 Ironhide was a great figure, so it should come as no surprise that Ratchet toes the line and also turned out fantastic. With display and storage space being what it is these days, I’m not that keen on buying a lot of repaints anymore, but with some of these old G1 guys, I have to make an exception. And with that having been said, we’re not done with this mold yet. It also got repainted into Crosshairs, and I wound up buying him too, so we will revisit the Ironhide/Ratchet mold again in the not too distant future.

Folks, I’m really trying to get back to a regular three-post rotation for content each week, but it hasn’t been easy. I almost had it last week, but stuff came up and I just didn’t have the time. Maybe this week will be different. In the meantime, it’s another Monday, and that means time to open another Marvel Legends. And today I am once again forgoing random chance and taking a look at a figure that was just pitched at my porch by an Amazon delivery driver. It’s the Walgreens Exclusive Emma Frost!

No, that’s no mistake. I had to go to Amazon to get this figure, which is unusual because my Walgreens has been pretty good at getting their exclusives on the shelves. I’m not sure if I missed this one, or just didn’t get lucky, but when I saw her turn up on Amazon at a sort of reasonable price, I gave up on my luck changing and jumped at the chance. Hasbro’s last crack at Frost wasn’t exactly a 10 out of 10, but I still would have been happy to have found her at a price that wouldn’t have prohibited me eating for a week. 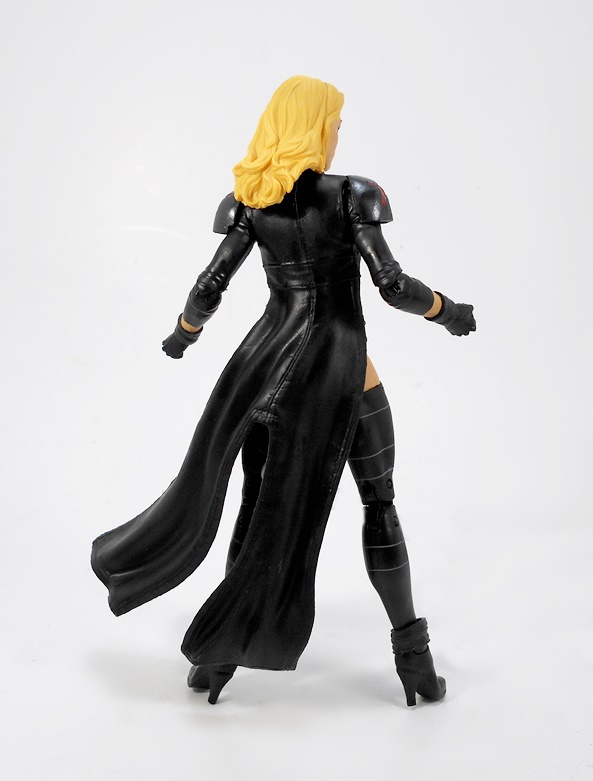 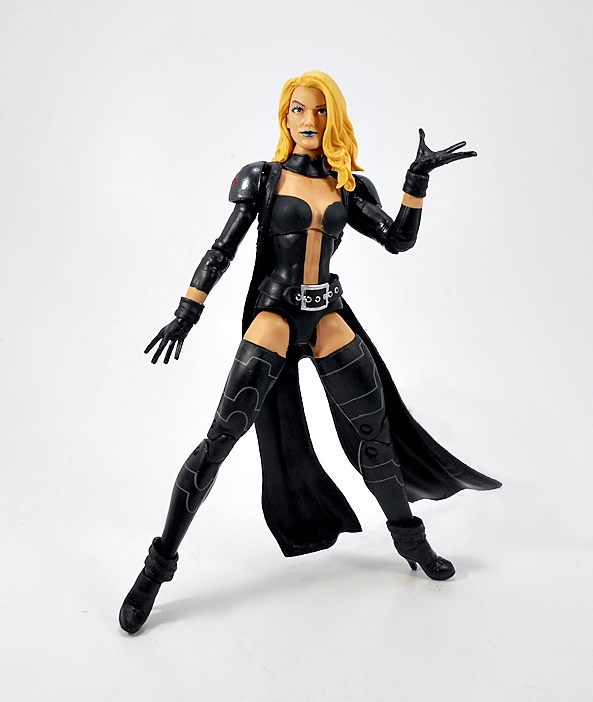 And yes, this new release is sort of a consolation prize, because she isn’t Emma in her traditional white costume. Don’t get me wrong, I’m a big fan of Dark Reign, and I can’t deny the appeal of the black costume, but seeing as how this is currently my only Emma Frost on my Legends shelf, it’s not the iconic look I would have preferred. In terms of sculpting, this is one of those figures that relies heavily on paint to create the costume. Her black one-piece is all paint, with skin-tone recreating the split down the middle. Likewise, her sleeves are painted to be cropped short, and even her thigh-high stockings are painted with some gray lines running across them. She has high-heels, which I’m sure we’ve seen before, and there are separate pieces that hang around her wrists and ankles to create the illusion of the tops of her boots and gloves.

From the neck down the only other new stuff we get is a wide belt, a pair of shoulder armor, and her jacket-cape-thingy. I do really dig the slight billowing effect of her cape, and the sculpted stitch lines are a great touch. She also features red branded X’s on her shoulders, which I don’t really remember from the art, but I like them all the same. With that having been said, everything looks pretty good, although there’s fair amount of black paint spray around her chest. At least the silver buckle and eyelets on her belt are neatly painted. 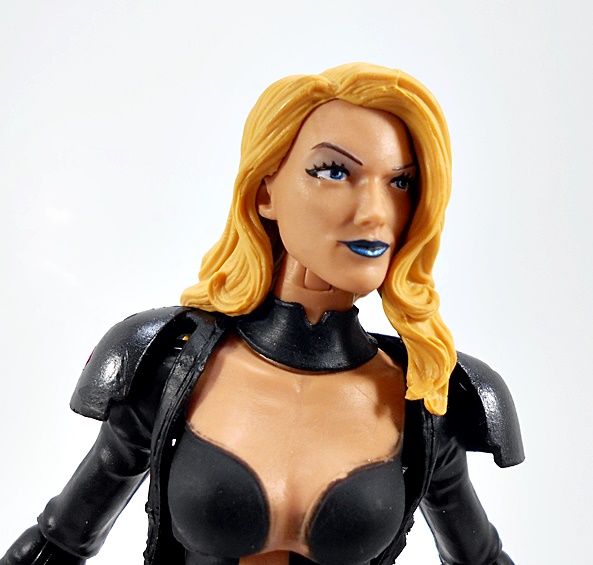 The head sculpt here is absolutely fantastic. She’s very pretty and the paintwork is a heck of a lot more crisp and clean than some of those lines on her costume. The metallic blue lipstick is a nice touch too. The blonde hair is sculpted as a separate piece of plastic, which gives it that lovely degree of depth. It partially hides her right ear and the left side of her face.

The articulation here follows the usual Legends gal pattern. The arms have rotating hinges in the shoulders and elbows. The wrists are on rotating pins, allowing you to swap the hands between fists and the open magic-casting hands we’ve seen plenty of times before. The legs have ball jointed hips, double-hinges in the knees, swivels at the tops of her stockings, and ankles with both hinges and lateral rockers. And yes, it is a royal paint in the butt to get her to stand with those heels, but hey who needs practical when they look that good, eh? Finally, Emma has a ball joint under her chest and a hinged ball joint in her neck.

And in case you thought I forgot, Emma does come with a second head sculpt featuring her shorter cropped hair and metallic red lipstick. It’s every bit as good as the other head, possibly even a tad better, but you know what? It’s also like a big F*CK YOU to me, because now I have a perfectly iconic Emma Frost head without an iconic body to put it on.

Does it sound like I’m a little angry at this figure? Eh, I’m really not. It’s a great looking figure and certainly not a bad addition to my Legends line-up, but it isn’t the Emma Frost I wanted. Hell, I don’t even have any Dark X-Men to display her with on the shelf. Hey, Hasbro! There’s a great idea for an Amazon Exclusive. Do a Dark X-Men six-pack like you did with A-Force and Alpha-Flight to go along with this Emma. Hell, most of them would just be repaints anyway, and dopes like me will buy it. Anyway, Consolation Prize Emma set me back $28 on Amazon with that lovely free Prime shipping. So, yeah, I had to pay a premium for her, but at least I didn’t get too beaten up. Now if only Danni Moonstar would drop a couple of bucks, I’d bite the bullet and pick her up as well.