What the hell is this? A review of a PS4 game? Yeah, you may think that the subject of today’s review is a weird item to mix in among my usual toy talk, but you’d be wrong. I’m not here to talk much about the game, but rather the Vintage-GI JOE-style action figure of BJ Blaskowicz that comes bundled in with this collector’s edition of the game. I count the original Wolfenstein 3D as one of the most influential games of its time, and there’s been a sad lack of merchandise for it. Probably because of the whole Nazi thing. But BJ and I have together blasted our way through countless miles of corridors and it’s about damn time that I have an action figure based on him.

Holy hell, this box is huge! When it comes to video games, I don’t tend to buy a lot of crazy Limited Editions because their odd sizes messes up the feng shui of my game shelves. Yeah, I really am that OCD. Obviously this one had to be upscaled to accomodate the sixth-scale figure inside. The game itself also comes in a steelbook, so I can actually fit it on my shelf. But the overall package looks like a gigantic PS4 game box. But that’s just a sleeve that lifts off to reveal the inner box.

And it’s here where the presentation just oozes charm because it is so delightfully meta. This is supposed to be an action figure from the in-game universe, where the Nazis are in power and instead of GI JOE, they have the ELITE HANS line of action figures, and this figure is marketed as Terror Billy, because our hero is a villain to them. Bethesda even produced their own in-universe toy commercial, which is pretty spectacular and makes me wish they actually produced all those other figures. Anyway, the box has a decidedly vintage feel to it, complete with some faux weathering and a window to show off Billy. The side panels include a fake Collect Them All line up on one side and Billy’s inventory of weapons on the other side. Inside the box, BJ comes in a large molded plastic tray with his weapons and jacket laid out beside him. 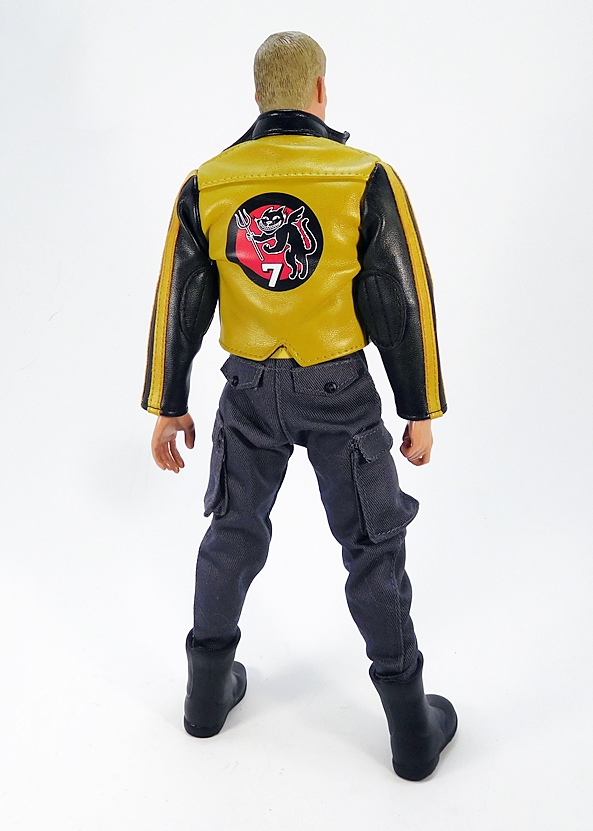 First off, I have to say for a collectible pack-in they did a really nice job on this figure. It’s just the right mix of retro feel, while still being a quality figure. The underlying body features some very workable articulation with only the lack of any kind of arm or leg swivels to restrict what he can do. And the absence of bicep swivels really hurts. It’s a shame that I’m not going to get a lot of cool poses out of him, but he’s still a lot of fun to mess around with and feels a lot like an old GI JOE. 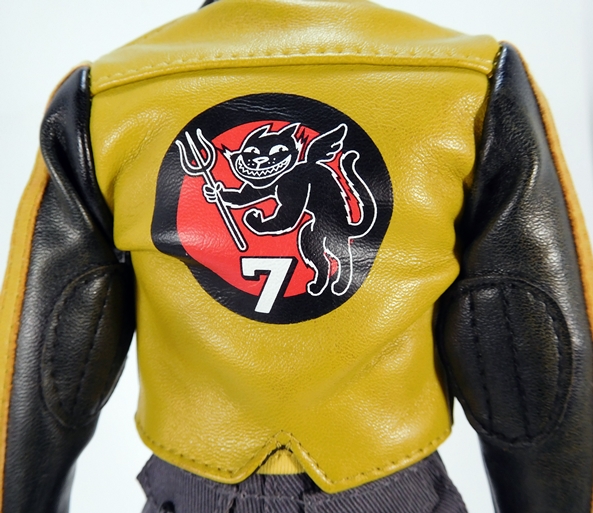 BJ’s outfit features a yellow and black leather-like jacket with elbow patches, a working zipper and some cool art on the back. The stitching is all nice and neat and it fits the figure quite well. Under that you get a yellow short-sleeved t-shirt with Ranger Airborne on the front. The cargo-style pants feature stitched pockets and buttons, and the boots are soft plastic sculpted with laces.

The head sculpt is excellent for what this is. It looks a little GI JOE like, but it’s also a nice representation of BJ’s likeness in the game. Oddly enough, the one they show in the commercial has a scar, whereas the figure in hand does not.

BJ also comes with his brown bomber jacket, and oh boy was this a bitch to get on him. It’s a tight fit around the shoulders and his hands were really tough to get through the sleeves. In the end, I was able to do it, but it really works against the arm articulation because it’s so snug. The jacket features a fur collar, stitched pocket, buttons down the front, and a velcro strip to close the front flap. Unfortunately, I don’t think the jacket looks all that great on him. While I appreciate the fur in the collar, the faux-leather pattern isn’t terribly convincing and it just looks stiff. It’s kind of a shame, because this is his more iconic look, but then it’s pretty amazing that Bethesda included an extra jacket in with this figure, so I’m willing to be pretty forgiving. 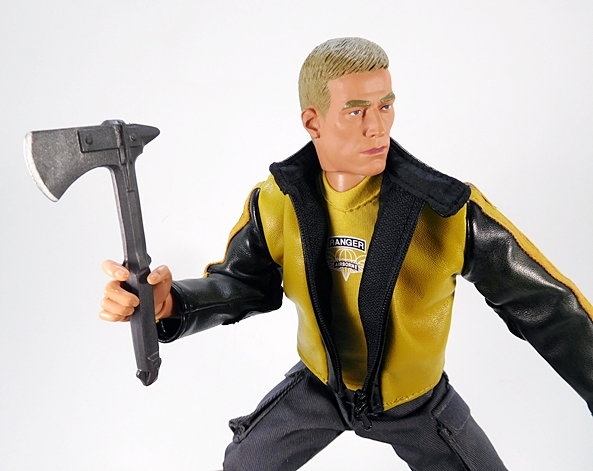 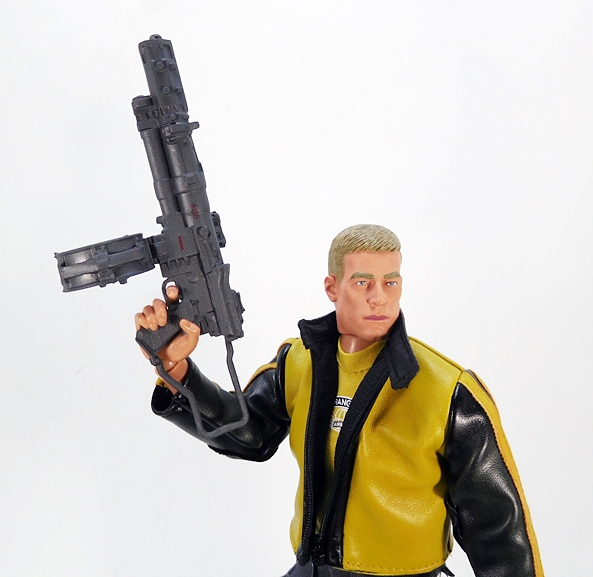 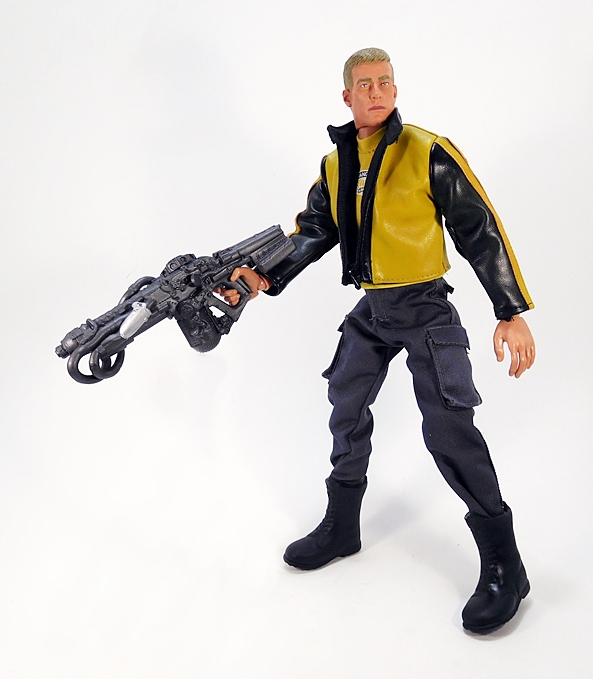 Finally, the figure comes with five weapons, four are guns from the game (the Dieselkraftwerk, Schockhammer X, Laserkraftwerk, and Maschinenpistole), plus you also get the axe which he uses for silent take-downs and melee finishes. These are all sculpted in solid pieces of plastic, and while the sculpts are pretty soft, they have some nice detail in them. BJ’s right hand is designed to hold them pretty well, but because there’s no swivel articulation in the arm, you can’t really get him to do much with them. It also would have been nice to give him a gun-holding left hand, since dual-wielding is an option in the game. 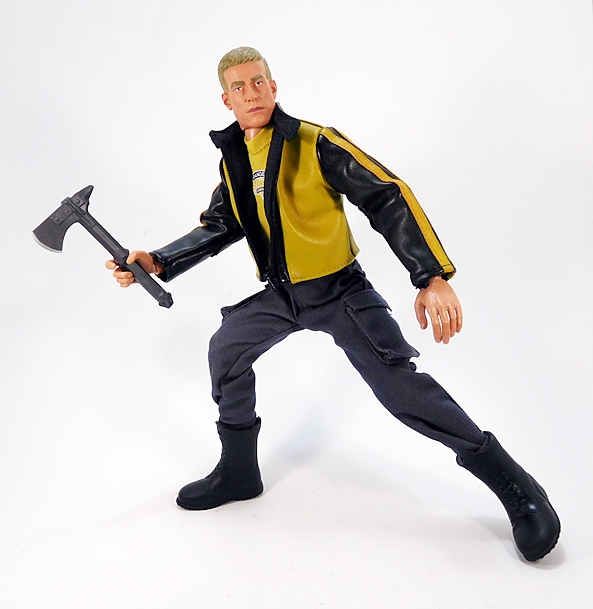 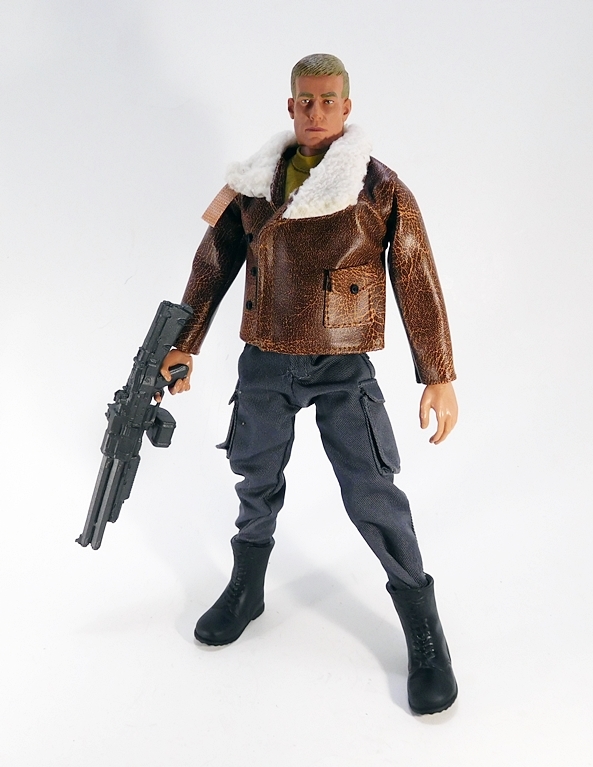 I don’t know how much this set cost originally. I happened to find it while digging through a dying Best Buy. It was on a clearance shelf for $39.99, which was worth it for the price of the game alone. BJ has spent most of his career as a non-character, but The New Order and The New Colossus instilled more character into him than most video game heroes, so it’s nice to finally have a figure of him in my collection. Sure, I would have rather someone like NECA grabbed this license and gave us a full line-up, but this works just fine as a consolation prize. More often than not premiums like this just tend to be statues, and those are nice, but this really feels like some serious thought went into it. The figure will appeal more to collectors with a nostalgia for the old 12-inch GI JOE’s, and I to be honest, the real draw here is just displaying the figure in its box.