It’s been a while since I last looked at any of the WildCATS figures by Playmates, but feel free to go back and look at what I’ve already reviewed HERE. I’m going to do my best to post the rest of my collection throughout the next week or so. Keep in mind, these figures are based on the short-lived thirteen episode cartoon and not so much on the comic, so that’s the context in which I’ll be discussing them. Today we’re checking out Warblade and Grifter. I really wish I had in-package shots to show you, because these figures look magnificent on their original cardbacks. The cards are big, colorful and sport some amazing comic style character art.  Unfortunately, most of my WildCATS figures came to me in a big lot of loose figures. If you check out the link above with the older reviews, you can see some of the other figure packaging to get an idea. It’s not a highly collected line, so I often consider going back and picking up a carded set. I don’t usually do that, but it just goes to show you how much I love the presentation on these figures.

Warblade is the part-human noob of the bunch, as he was recruited to the team in the first episode of the toon. It was kind of similar to what the X-Men series did with Jubilee, but Warblade assimilated pretty quickly and before the end of the episode he was rattling off his teammates’ names and kicking arse like he’d already been around the block more than a couple of times. Being green wasn’t an element of his character that extended onward and VooDoo more or less remained the sympathetic and grounded teammate who kids could better relate to. 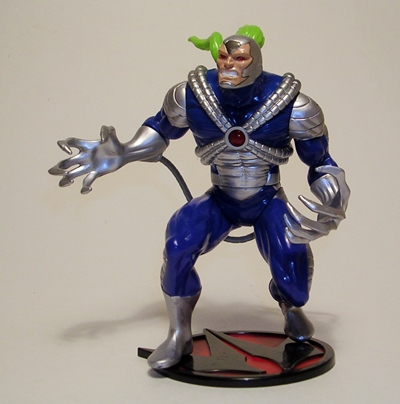 Warblade has never been one of my favorite characters, mainly because his character design is just batshit crazy in only the way the 90’s knew how to do it. Maybe it’s the neon green ponytail or the red eyes or his ape like posture, but he’s a far cry from his human computer genius counterpart. I seriously love most of the character designs in this series, but Warblade is the one exception to that rule. Nonetheless, his suit is a pleasing blue and silver and Playmates did a great job sculpting the cables that crisscross his chest and then feed out to his arms from the back. 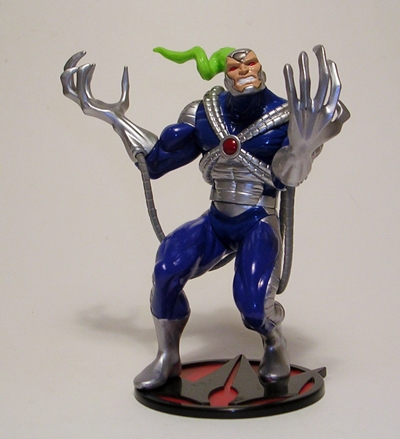 Warblade’s signature power is in his arms, which he can elongate, and he can morph his hands into claws or metal blades. These powers carried over pretty well to the figure, which uses pop off hands as accessories. There’s a set of claws, a large blade, and a normal hand. The rubbery cables plug into a socket in whichever arms you care to attach. In addition to the extra arm attachments, Warblade comes with a Halo Industries walkie-talkie and a figure stand.

There are seven points of articulation on Warblade. His head turns, his arms and legs rotate at the shoulders and hips, and you can swivel his forearms where they detach. It’s standard articulation for ten years ago, but pretty stale now, plus Warblade’s hunched pre-posed sculpt doesn’t help a whole lot either. You can get some decent poses out of him, although given the lack of knee articulation, I would have preferred him a bit more upright. Ok, enough about Warblade, let’s move on to my man man, Grifter… 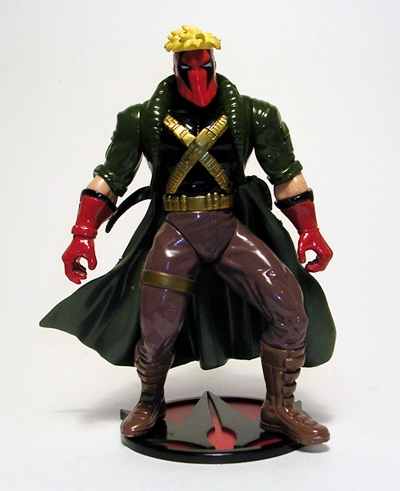 At the other end of the spectrum, Grifter is my favorite member of the WildCATS team and my favorite figure in this enitre line. As the human, gun-toting, smart mouth with a shady past, he’s designed to be the team’s bad-ass and this figure does the character justice. The sculpt is spot-on, from his tuft of blonde hair that crops up past his mask, to the billowing trenchcoat and even the little details on his belts. The paint apps are excellent and the black and red on his mask and gauntlets really make the figure pop. This is what a comic book/cartoon figure is supposed to look like, folks. He’s glossy and very toyish and there’s just something about him that really clicks with me.

Grifter has eight points of articulation. His head turns and his arms and legs rotate at the shoulders and hips. He also has swivel cuts in the forearms and in the waist. Once again, it’s not a lot, and while he is somewhat pre-posed, it isn’t as bad as Warblade or some of the other WildCATS figures.

Grifter comes with no less than three weapons, which include a a Kherubim blaster, a shotgun and a blaster pistol. Sadly, the pistol wasn’t included with my loose figure, but I can’t say as I miss it. Considering Grifter was always depicted in the cartoon wielding two of the Kherubim blasters, I’d rather have just had an extra one of those and one day I will likely buy a second figure just to get it. He also comes with the same figure stand and walkie-talkie as Warblade.

As I mentioned before, the WildCATS figures aren’t exactly highly sought after collectibles these days. If you’re in the market you should be able to find these guys carded on Ebay for under $15 a piece, and just as often you can usually find three or four of them in a lot for less. I can probably live without having an unopened Warblade, but sooner or later I will pick up a carded Grifter to hang on my wall.