Why is it that Hasbro can’t give us a full set of proper Dinobots in any of the modern continuities? In Energon we got that crappy Grimlock and Swoop combiner. Prior to that we got those terrible Walmart Universe two-packs. Now, in Animated we got Snarl, Swoop and Grimlock, but no Slag or Sludge. Well, that sad fact has nothing to do with the particular figure we’re looking at today, Deluxe Class Snarl from Animated, but alas I’m not terribly fond of this figure, so I thought I might as well start with a bitch-fest and keep it going.

You get the standard Deluxe carded package with Snarl carded in his dino mode. First problem: He’s a Deluxe. I don’t think the Dinobots should ever be produced smaller than the Voyager Class. Maybe Swoop… maybe. Now, keep in mind, I’m not saying I’d want to see this figure produced larger, but I think if they started off as a Voyager, it would have been a better designed figure. I guess it makes sense that Grimlock is the leader so he’s bigger, but Snarl is just waaaay too small to be a proper Dinobot in my eyes. At the very least, he should have been a much beefier Deluxe.

Apart from his size, I actually don’t have a lot of issues with Snarl’s dino mode. Yeah, the top of his head is obviously peeping out the middle of his back, but that doesn’t bother me all that much. At least you can’t see his face. This dino is that crazy mix of angles and contours that matches Grimlock fairly well. His legs have some decent movement too making him a pretty fun little Dino. He has a silly little spring loaded flame-armor gimmick that pops out of his shoulders, but it’s not much to write home about. The coloring is pretty good. As with Grimlock, Snarl’s deco mostly makes use of gray colored plastic with a fair amount of black thrown in. The gray is notably darker than Grimlocks, but it’s close enough. You also get some of that lovely gold paint.

I am rather torn on the dino head. The translucent red horns are cool, but I don’t like the beak. It looks like he’s been dipping his nose into the… wait for it… JAM! There it is. The huge exposed screwhead in the side of the face doesn’t help and the gray paint on the crest that surrounds his face was pretty scuffed up right out of the package. And then there’s the robot mode… 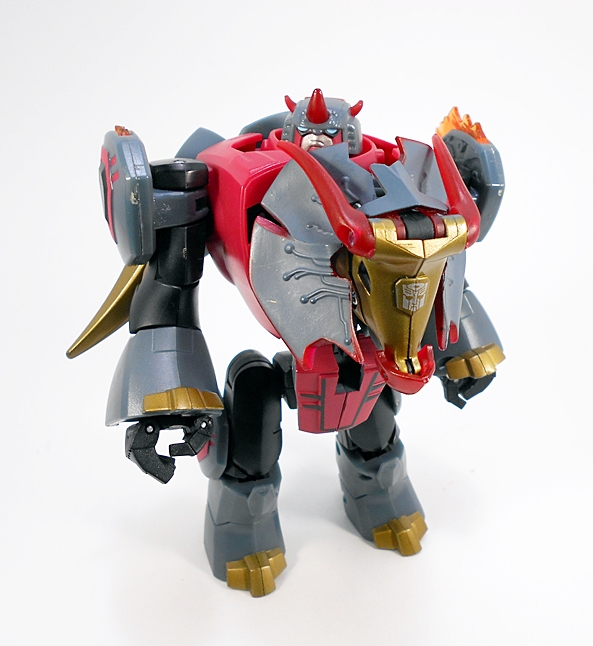 Ugh. Where to begin. Well, I’ll start by throwing out a compliment. This bot mode matches the Animated aesthetic quite nicely. As for the rest? Well, let’s start with his size. Putting aside what I said about Dinobots shouldn’t be Deluxes in my eyes, this guy is even short for a Deluxe. He makes up for his height a bit with his stocky frame, but still… he’s shorter than Bumblebee for crying out loud! I do like the fact that his dino head forms his chest, that’s very Beast Wars-y of them, but it sticks out really far and totally obscures his face if you’re looking dead on at him. I wouldn’t want to walk around with that albatross hanging off the front of me. 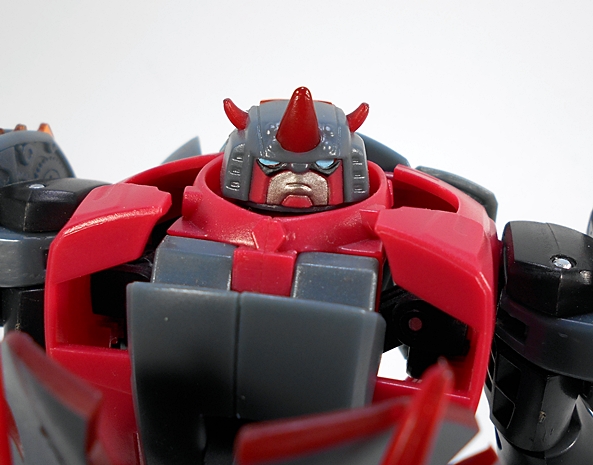 His head sculpt has personality in spades, I love it, but I literally had to fold down his whole dino-head-chest, just to get a shot of it. It’s also sunken in the center of that raised ring. It feels like you should be able to grab the head and pull it up, but nope. That’s the only position and as far out as it comes.

The articulation is decent enough, but his stocky build gets in the way of a lot of pose-ability. There’s not a lot of range of motion in those elbows and no lateral movement in the shoulders. He can get a pretty wide stance thanks to the ball joints in his hips, but the hips themselves always come un-tabbed when I’m playing with him, and that gets annoying.

Snarl comes with an energon club, which is basically just an elongated blob of translucent orange plastic. I actually kind of like it, because it’s a futuristic energy-based weapon based on basically the most primitive weapon design you can imagine. For some reason that just makes me smile. Afterall, he’s a Dinobot, so his weapons should be based on cave man weapons, right? 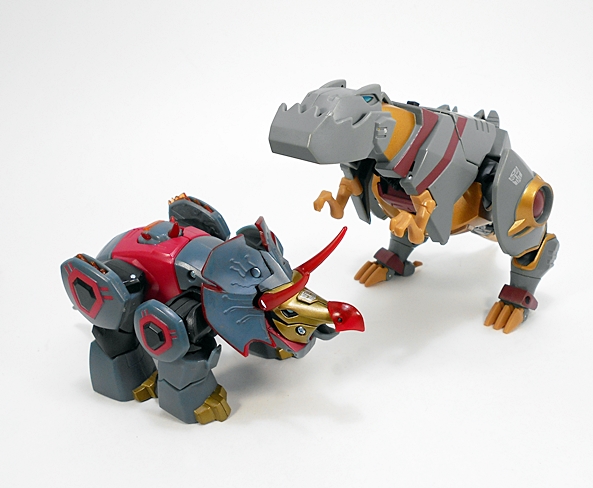 Am I being too hard on this little guy? Am I missing out in the fun and whimsical spirit of TF: Animated? Maybe. Overall, I think Animated Grimlock turned out so well, Hasbro missed an opportunity to follow through on the others in a similar manner. I don’t hate this figure. I’ve certainly spent ten bucks in worse ways. But he just has a bunch of nagging issues that keep him from being solid. I suppose there’s still a chance for more Dinobots in the Generations line, and yeah we still have those Dinobot Power Core Combiners coming, but it’s just not the same. Maybe I’m just going to have to hunt down the original G1 Dinobot toys again and get my satisfaction that way.