Given the mileage they get out of their molds, it was pretty inevitable that once Character Options released the first classic Sonic Screwdriver that more would follow. The first release was based off of The Third Doctor’s trusty device, and now CO has followed suit with the Fourth Doctor’s version. Let’s see what we got…

The packaging is the same design used for the Third Doctor’s screwdriver with a different printed insert to suit the Fourth Doctor and a new lenticular collectible card. The back panel has a blurb about the screwdriver and the Doctor himself. There’s no “Try Me” feature or anything and the batteries actually come mounted in the tray beside the toy. Yes, you will need a small phillips head screwdriver to put the batteries in the scewdriver. I believe that’s called irony. While we’re on the subject, you’ll also need a good pair of scissors or a razor blade to get into the ironclad clamshell of a package. 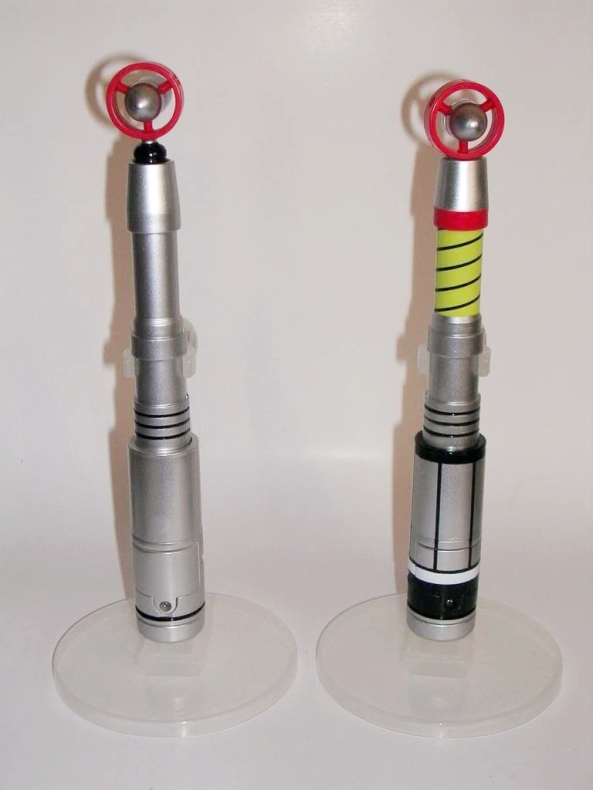 As you’ve probably already guessed, this Sonic Screwdriver is just a very minor resculpt of the Third Doctor’s issue. In fact the only difference in the sculpt is the elongted bit on the back of the head and the fact that the head sits a little higher in the shaft. Again, the head of the screwdriver is made of soft bendy rubber to prevent it from snapping off. As a result what really separates this one from the previous release is the color scheme. The yellow spiral stripe is gone as is the simulated duct tape wrapped around the bottom of the shaft. What you get is a mostly silver piece with some black accents and the red on the instrument’s head. While the Third Doctor’s version is certainly pretty screen accurate, I’m guessing this one will be the more desireable for lacking the yellow striping. The sounds are activated by pulling down on the shaft and the sound chip is identical to the Third Doctor version. Pull it down a little bit to hear the first sound and pull it down all the way to hear the one with more of a warble to it. 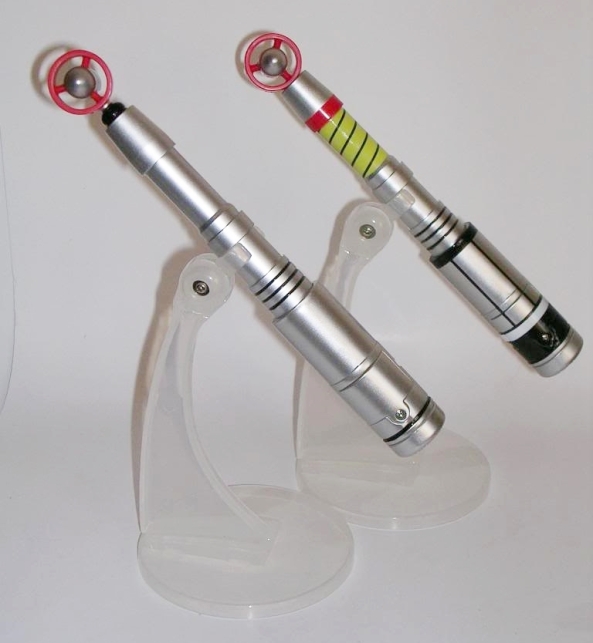 The Fourth Doctor’s Sonic Screwdriver retails for around $25. As with the first release, I think $20 would have been a more reasonable price, but I’m not going to complain. I’ve wanted one of these for a long, long time, and it sure beats paying the $200+ dollars for the metal prop versions that some companies have put out. I tend to be a bigger Jon Pertwee fan than Tom Baker (although I love them both) and yet I still prefer this Sonic Screwdriver over the one used by Pertwee’s Doctor. Sure, if you have the first release, this one is really redundant, but hey, if you’re a Who fan, you really should own both anyway.