Get your blankets and milky ba-ba’s kids, because before I get to today’s review… it’s story time! About 15 years ago, I was a video game junkie. I mean, I was seriously obsessed. I found myself at Gamestop or EB Games every single Tuesday picking up whatever the newest releases were. Racing, RPG, Action, Shooter, it didn’t matter… I bought and played them all. Games consumed most of my life and my money and I even spent most of my time at work paying myself to talk about them on Forums (own your own business, kids, I highly recommend it!). Remember that ridiculous Steel Battalion game and controller? I was the sad, sorry sod that bought that! Fast forward to today. I own a 360 and a PS3. I still have my original Xbox and my PS2 hooked up, along with my Dreamcast. I still own hundreds of games. But it’s rare that I pick up a controller on any day other than my day off, and sometimes it’s because I feel obligated to. I don’t know what happened. Maybe my life became so saturated by gaming that I lost interest. Maybe the premature death of the Dreamcast (still my favorite console ever) broke my little gamer heart. That’s why sometimes I light some candles, bust out the Dreamcast, pour a lot of booze and sob like a sad, drunk baby while playing Crazy Taxi and Cannon Spike. 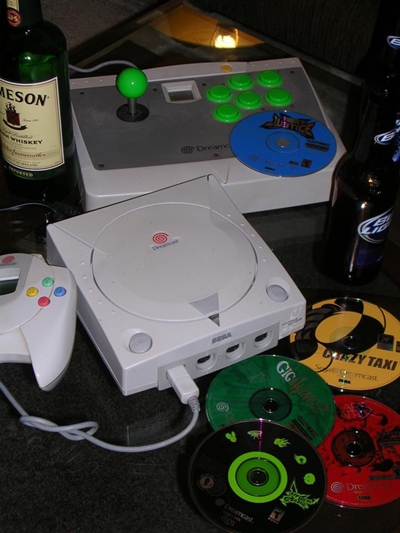 But it’s always nice to know that when a game like Bioshock Infinite comes along, I can fall in love with gaming again. I played the game through in two marathon sessions, and immediately jumped back in to play it again. I took a day to absorb it all and then jumped back in for a third time to really go Achievement hunting. It’s been a long time since any game (or at least any game that didn’t have Elder Scrolls on the cover) captivated me as much as this one. And hey, it never hurts when there’s a toy tie-in, because we’re not here to look at video games, we’re here to look at toys. As is often the case, NECA stepped in to deliver that video game-action figure tie in. I’m going to start out today with a look at a Boy of Silence and then tomorrow we’ll check out Elizabeth. 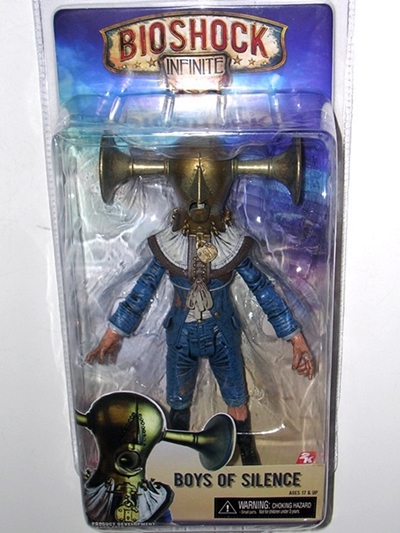 NECA does a great compromise between retail-friendly and collector-friendly packaging. The figure comes sealed in a clamshell with a printed insert. To get this guy out, you’re going to have to do some cutting, but if you want to have the best of both worlds, you can razor along the back of the package and get the figure out and return it without anyone being the wiser. I used to do this, but with space concerns being what they are, I’ve come to terms with the fact that most packages need to be pitched. I’m not terribly upset by it, as the package is nice looking and functional, but nothing I feel bad about destroying. I also can’t deny how much I love the choking rush of plastic fumes you get from slicing into a NECA package. Glorious! 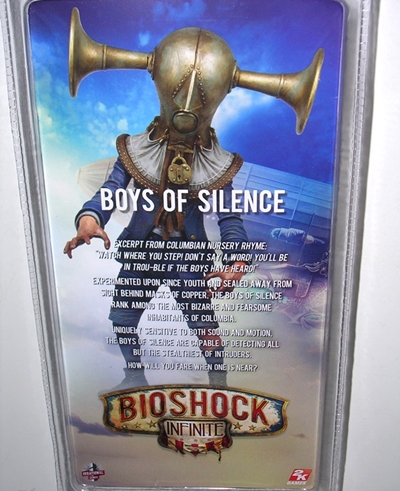 The back of the insert has a shot of the character and a little blurb about them, including one of the Columbian nursery rhymes. I heard the one about Songbird in the game, but I never heard this one in my travels through Columbia. As much as I adore Bioshock Infinite, I’ll confess that The Boys of Silence were kind of disappointing in the actual game. Spoilers! The production team seemed to be building them up a lot prior to BI’s release and seeing as how they were one of the only two initial figures released, I expected them to have a huge presence in the game. In reality, you don’t see them until you’re in the home stretch, and you only encounter a half dozen of them or so. I will grant you, one of them creates the game’s best (and only) “Oh crap, I just pooped the sofa” moment, which I’m not ashamed to say got me again on my second play through. 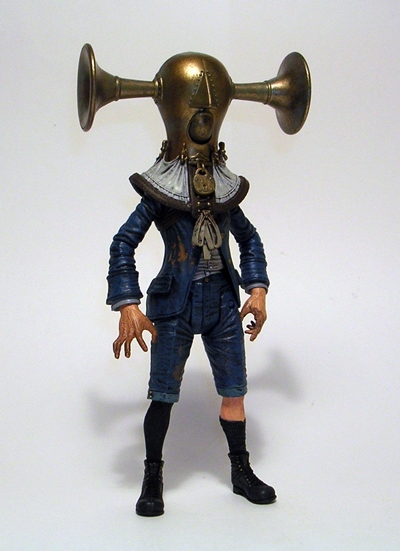 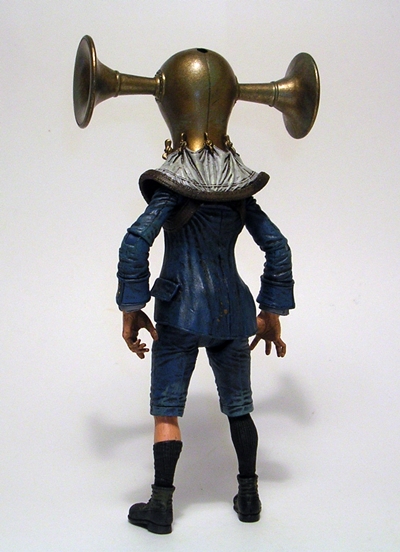 Ok, so he’s out of the package and I gotta say NECA worked their usual magic when sculpting this creepy bastard. He’s got the remnants of what looks like a colonial school outfit, maybe? Whatever the case, the detail is crazy. The wrinkling of his coat and pants looks amazing, and the coat is sculpted from separate, soft plastic to give the figure’s sculpt some nice depth. Even the little things like the laces in his shoes look fantastic. One of his socks is pulled down a bit, but this bastard doesn’t give a crap becaue he’s got a fricking Tuba locked around his head. Yes, in case you didn’t notice, his head is enclosed in the ghastly trumpet-looking contraption and features all the little rivets and a sculpted cowl that runs around the neck. The coolest touch here is the old-timey padlock, which is sculpted separately and jingles around on the hook. 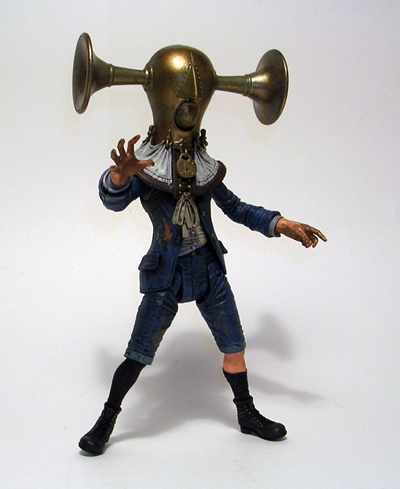 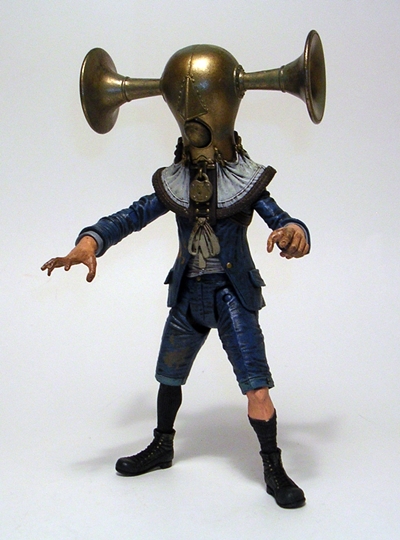 The paintwork compliments the sculpt very nicely. All the little buttons are painted, as are the eyelets for his shoelaces. There’s a fair amount of weathering and muddy paint applied to his outfit and his hands are filthy. What’s particularly cool is the finish on the helmet, which replicates antique brass quite nicely, right down to the tarnish. 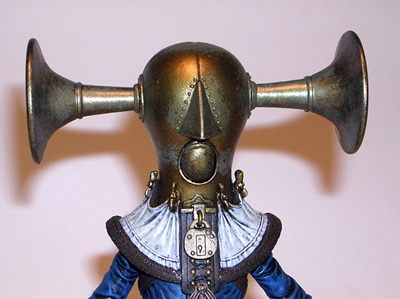 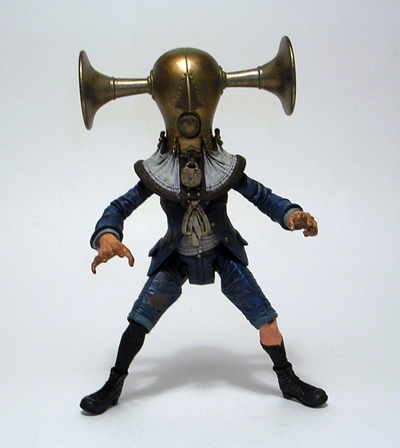 I wasn’t sure what to expect with articulation. In the end, the Boy of Silence has a lot more than I imagined he would. His neck is on a ball joint, which does not allow for a lot of movement, but he can turn a little bit to the left and right and a little up and down. His arms have ball joints in the shoulders, elbows, and wrists, although the wrists might as well just be swivels because the sculpted sleeves work against them. His legs feature a T-crotch with lateral hinges as well. It’s similar to the funky joints NECA used for Duke Nukem, but hey it works. Lastly, he has ball joints in the knees and ankles, and a swivel at the waist. Oh yeah, his mouth can open a little bit too, and yes it reminds me of Beaker from The Muppets. 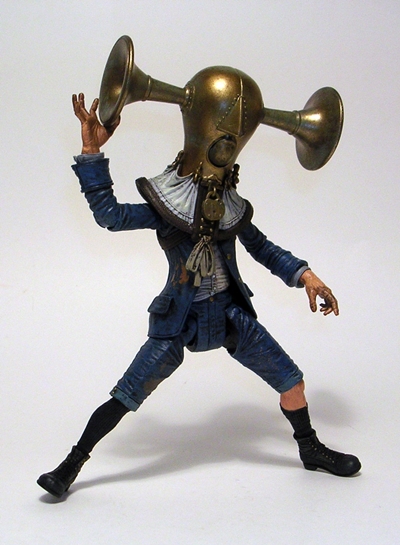 I paid $15 for this figure online and that seems about right, as NECA continues to deliver a lot of workmanship for a decent value (that’ll be a continuing theme here for the next couple of weeks, because it just so happens that I have a lot of NECA figures coming in to look at). I don’t know that The Boy of Silence is a “must own” figure, but NECA certainly fashioned him with as much love as if he were the main character of the game, and I really respect that. No, he wasn’t my first pick for a figure from Bioshock Infinite, but he does represent a nice example of the game’s outlandish and creepy design in figure form.

3 comments on “Bioshock Infinite: Boys of Silence by NECA”