I love Skiff Guards. If you haven’t read my chronicles of love for these delightful alien desert pirates then I will direct you to HERE and HERE and even HERE. These characters got some great attention in the Vintage Collection line and it’s nice to see that they’re still getting some love in the Star Wars Black series. Today we’re looking at Vizam who I presume is the guy firing the gun from Jabba’s Sail Barge and I’m pretty sure this is the first time he’s being released as a figure. While I have a number of figures in the 3 ¾” scale Black series, most of them I picked up on the cheap. Vizam here is the first one that I actually sought out to purchase simply because I cannot resist the Skiff Guards.

There’s the packaging. Last Friday I said my piece about the abysmal art design on Hasbro’s current packages and I don’t want to dwell on it any more. I suppose the bland, black cardbacks are more appropriate for Star Wars than they are Marvel. Even the copy about the character on the back is so bland and sterile that it feels like Hasbro just doesn’t care about presentation anymore. They might as well just print, “this is some dude from Star Wars. Buy it.” Either way, the package here is nothing more than a purely utilitarian vehicle to get the figure to the collector. The only real redeeming feature here is that the unobscured bubble does indeed give you a great look at the figure you’re buying.

Vizam is a Nikto, which I always used to think was a name and not a race mainly because the more familiar Skiff Guard figure that appeared first in the Kenner line was called Nikto and still was right up to his Vintage Collection release from a year or so ago. As a result, Vizam uses a repaint of the same head used on Vintage Collection Nikto. It’s a great head sculpt and the fresh paint makes it work as a different character, so I’ve got no gripes about the recycled noggin. The headgear is brand new and it’s still removable too! 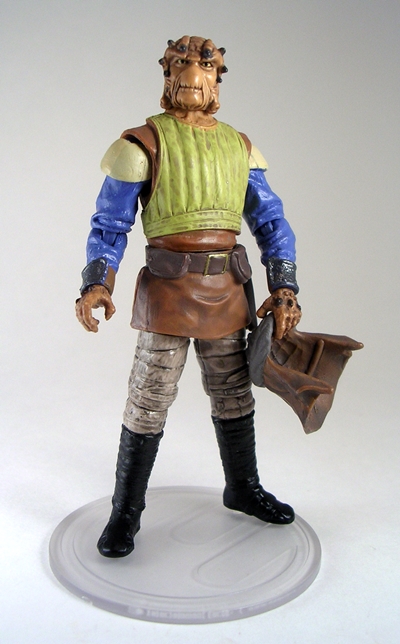 The rest of the figure represents the usual ragtag style of outfit that is all the fashion amongst the Skiff Guards these days. I kind of get the feeling that on their day off, these dudes walk around the Sarlacc Pit to scavenge for clothes that the beast has coughed up. Vizam has a little bit more color than most of his cohorts thanks to his blue sleeves, which contrast rather sharply with his brown tunic and his quilted tan chest armor. There are some nicely detailed pouches on his belt and he has a functional holster for his little holdout blaster. Both the sculpt and paintwork are excellent here. Sure, the hinges in the shoulders and knees aren’t painted, but other than that the figure looks so good that I’m inclined to believe Vizam started life as a Vintage Collection release before getting bumped to be repackaged into the Black Series.

Articulation here is right in line with what we got on the Vintage Collection guards. There are ball joints in the neck, shoulders, elbows, knees, and ankles. There is a swivel in the waist and again at the wrists. The only real disappointment here is the antiquated T-crotch, which prevents any kind of wide stances.

In addition to his pistol and headgear, Vizam comes with the cannon that he mounted to the rail of Jabba’s Sail Barge to take pot shots at our heroes. It’s a really nice sculpt, but it’s cast in some very unfortunately soft plastic. Also, the mounting arm connects to the gun with a ball joint that wants to pop out every time you work the articulation. The arm does have a clip, which is compatible with the railings on the Vintage/POTF2 Skiff vehicle, which is an incredible nice touch. 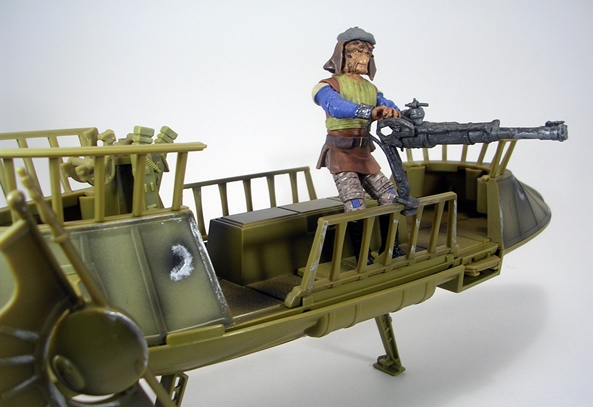 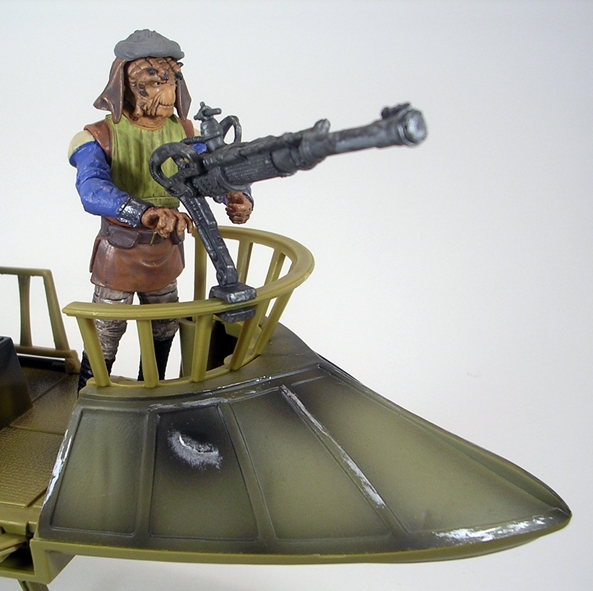 It’s a little big, but then the Skiff is a tad undersized for the figures anyway. I still think it works well enough. 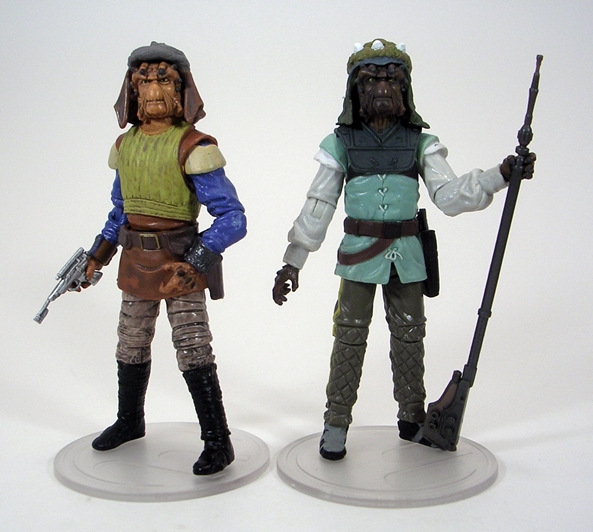 And so, the 3 ¾” Black Series continues to be all over the map in terms of quality. I’ve been disappointed by more than my share of these figures, but just when I’m about to quit on the line altogether I get a figure like Padme Amidala or Vizam here, which gives me renewed hope and makes me hang on a little longer. Granted, I’m totally biased in favor of this guy because I do love me my Skiff Guards so damn much, but I still think Vizam is a fantastic all around figure and a great addition to my the crew of my Tattooine Skiff.