The last time I visited with the Infinite Series, I took a look at Grim Reaper so it seems only fair that this time I check out Eric’s brother, Simon Williams, aka Wonder Man and as luck would have it, he just so happens to be part of the new wave of figures. I’m sure I mentioned last time how much I love Eric and Simon’s backstory. When it comes to origin stories, I tend to find the tragic ones a lot more interesting and that’s a big part of what draws me to Wonder Man, a character born out of desperation, manipulation and bad choices.

Here’s the packaging and since I’m tired of talking about how much it sucks, I’ll take this opportunity to put the figure into some context. Wonder Man’s first 3 3/4” Hasbro outing came back in the Marvel Universe line. This version of the character is his powered up and unstable form, which was also quite beautifully showcased in a story arc on Avenger’s Earth’s Mightiest Heroes. I’ll also note here that I’ll probably be skipping the rest of this wave as the rest of the assortment are repacks of the Marvel Universe Guardians of the Galaxy set from a year or so back. If you don’t have those figures, I highly recommend getting them, but chances are you may still be able to do better on price by tracking down and buying the boxed set. I still think packing that Rocket and Groot together as one $10 carded figure is kind of cheap on Hasbro’s part, but whatevs.

Getting back to Wonder Man, this figure appears to use the same mold from the Marvel Universe version only this time he’s cast in translucent purple and blue plastics to simulate his ionic energy form. The only paint apps here are his eyes and the W-ish stripe that runs across his chest, back, and shoulders. I know some people go absolutely apeshit over translucent plastic figures and toys. I’m not one of them, but I have to admit that the effect here works well and the figure looks quite striking. I am, unfortunately missing the original Wonder Man release from my Marvel Universe collection, so I can’t give you a side-by-side comparison.

Translucent plastic sometimes has it’s downsides, but there’s none of that here. The sculpted detail in the head is pretty damn sharp and I can make out all the details from the original mold. The joints are also sturdy and the figure is highly poseable. How poseable? Let’s run down those points… The arms are ball jointed at the shoulders, hinged at the elbows, and have swivels in the biceps and wrists. The legs are ball jointed at the hips and ankles, and double-hinged at the knees. Simon has a ball joint in the torso and another at the neck. It’s basically most of what you expect to find in a modern MU buck, minus some swivels in the legs. 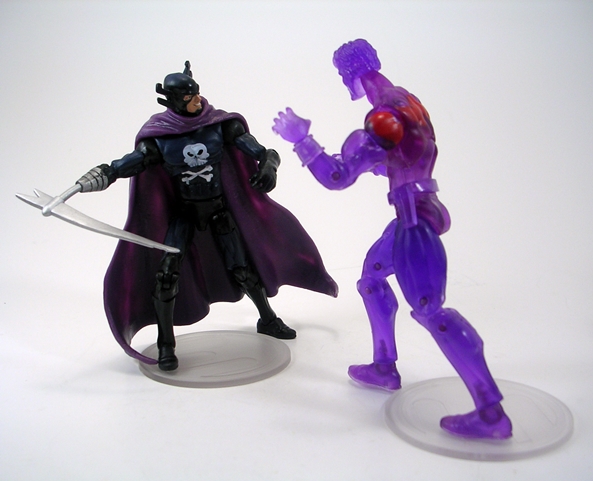 And that’s pretty much all there is to say about this guy. I’m not usually one to go for these kinds of… ah… repaints? But in this case I really like what Hasbro did here. The translucent effect looks fantastic on the figure and it suits the character quite well. I’m also very pleased I was able to get him at a decent price without having to buy the entire wave with three figures I already own. And I’ll give a shout out to Nerd Rage Toys for that! It’s a retailer that is quickly becoming my go-to source for Hasbro 3 3/4″ figures. I also think it was smart to get a version of Wonder Man on the pegs soon after Grim Reaper and without doing a straight repack too! I don’t know that this is an essential figure, but I’m mighty glad to have it in my collection.