One of the biggest disappointments out there right now in the toy aisles for me is Hasbro’s total failure at getting their 3 3/4” Rebels figures out to the pegs. I’ve yet to see one in the wild and, while that’s not uncommon in my area, the fact that the figures are still selling for around $25-30 each on Amazon leads me to believe that the distribution problem is universal. And so, I fall back upon LEGO to get me my Rebels toy fix. Way back in September, I looked at LEGO’s Phantom and this time I’m going to check out Ezra’s Speeder Bike set. 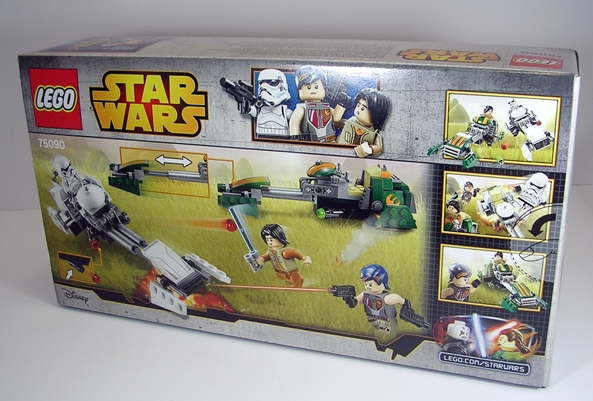 There’s not much to say about the box, except the deco is pretty cool. I like the use of the Stormtrooper helmet in the corner a lot more than a giant Darth Maul or Yoda head. It’s going to be hard to get used to new Stormtrooper helmets when Episode VII comes out. Anyway, the box let’s you see exactly what you’re going to be building. Inside there are two baggies of bricks, one small sticker sheet, and one instruction booklet. There are 253 pieces total and when you’re done you get two Speeder Bikes and three Minifigs. As always, let’s start with the Minifigs! 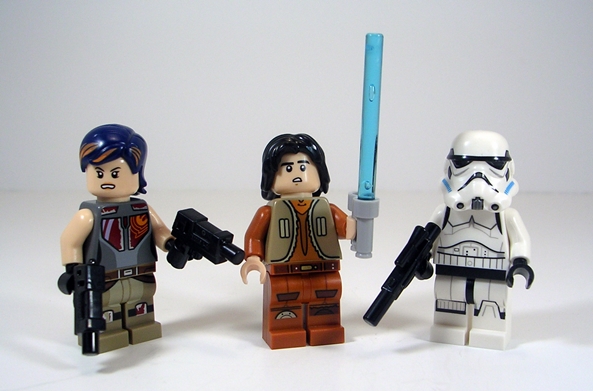 The Minifigs include Ezra Bridger (Yeah, I seriously typed Brooks first. I obviously have cheap whiskey on my mind!), Sabine Wren, and a Stormtrooper. Ezra is unfortunately the same Minifig that came with The Phantom only without the Imperial Pilot Helmet, so I don’t have much use for him. I’m not going to complain, though, since the set is called Ezra’s Speeder Bike, I knew what I was getting into. He comes with a lightsaber and a wrench. Sabine seems like an odd choice for this set, but she’s a great figure and I’m glad to get her. On the downside, the fact that she doesn’t come with her Mandalorian helmet is unforgivable and an obvious ploy to get you to buy another set where it will most certainly be included. She comes with two blaster pistols. The Stormtrooper is another great figure. The sculpt on the helmet is fantastic, even though he looks more like a regular trooper than the stylized ones that appear in the cartoon. The printing on him looks great and he comes with an E-11 Blaster. Ezra and Sabrine each have double printed faces and the Stormtrooper a single. 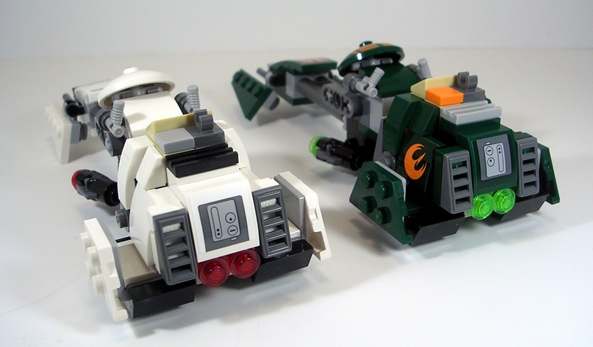 The Speeder Bikes are great builds and they’re actually a bit bigger and more complex than I was expecting. They are, however, identical builds so if you aren’t a fan of redundancy in your LEGO sets, this one might disappoint from that aspect. The only differences between the two bikes are the color of the bricks and some extra stickers on Ezra’s bike. Some of the play features include articulated front stabilizers, a clip to hold a weapon behind he seat, two firing launchers slung under each bike, and the front stabilizer assembly can extend outward. Both decos are plenty cool and if you want I suppose you could easily use the Stormtrooper and his bike with your regular Star Wars LEGO sets.

For a $20 set, this one feels like a pretty good value. Three Minifigs and two vehicles is certainly nothing to complain about and I had a good time building everything, even with the redundancy. The bikes are excellent and all the Minifigs are quite good. Still, I take serious issue with Sabine’s helmet not being included. I consider it a necessary part of her outfit and the omission smacks of serious money-grabbing tactics on LEGO’s behalf, although currently I haven’t seen any of the Rebels sets that includes her with the helmet, which kind of makes the situation suck all the more. Either we have to buy another set to get it, or we aren’t getting it at all. Ah, but I can’t stay mad at you LEGO and with Hasbro dropping the ball on getting their toys to retail, I intend to pick up more of these Rebels sets.