Early last month I checked out Series 2 of Funko’s Universal Monsters ReAction figures and was mighty impressed. I also waxed nostalgic about the original 1970’s REMCO figures that were also based off these movies and how this was one of those instances where Funko hit the whole nostalgia and retro concept right square in the bulls-eye. The Series 2 figures had great sculpts, awesome cards, and unlike a lot of their ReAction lines, they worked brilliantly at what they set out to do. I started with Series 2 because all of those characters were also released as part of REMCO’s original line, whereas only two of the four monsters in this first series were included in that vintage line: Gillman and Frankenstein’s monster. I like that they took the opportunity to expand and the additional characters, The Invisible Man and The Bride of Frankenstein, are pretty good choices, I think.

Once again, the cards for these figures are excellent. Funko took B&W stills direct from the movies. I even like these designs better than the original REMCO cards. Maybe that’s blasphemy, but I think these do a better job of capturing the flavor of the individual films. James Whale directed three out of the four of these films and I think his talents are best displayed by the magnificent lighting in the shot of Elsa Lanchester as The Bride. I also think it’s rather clever that they used that profile shot of her while the figure also had to have its head turned in the package because of the tall hair sculpt. The shot used for Frankenstein’s monster is perhaps not quite so stunning, but still a fantastic image for the card and oozes atmosphere.

Moving on to the second pair of cards, The Invisible Man was always among my least favorite of these films. I never really considered Dr. Jack Griffin to be a proper Universal Monster, but the film still works for the genre, especially since Whale directed it along with so many of the others, and I still welcome the addition of the figure into this fold. And that brings us to the wonderful Creature From The Black Lagoon. It’s one of my favorites of this entire genre and I think both the movie and the Gillman costume both hold up remarkably well to this day, especially the underwater shots. As good as Series 2 was, and as many great characters as they packed into these two waves, Gillman was the one that had me most excited. Especially since I absolutely loved that old REMCO figure. Time to open these figures up, but fear not, I’ll be using a razor and a degree of care so I can save the cards. Let’s start with The Monster and his Bride! 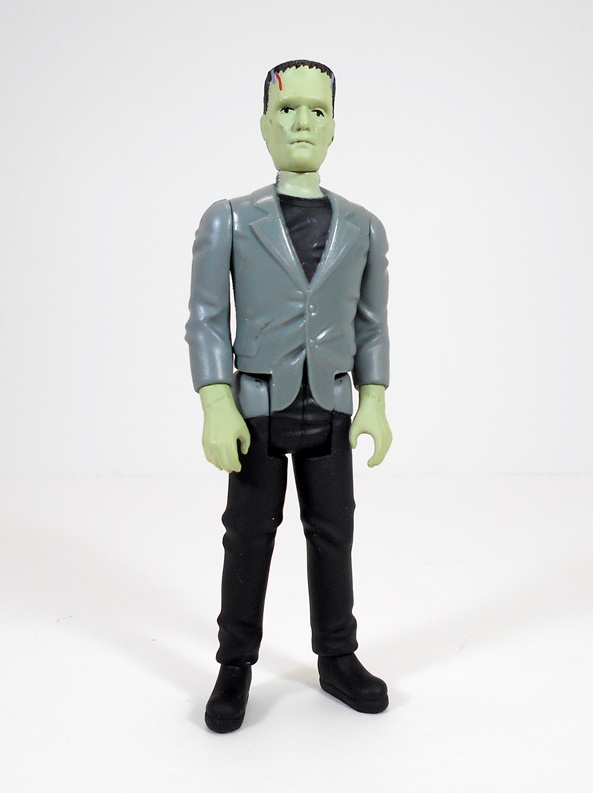 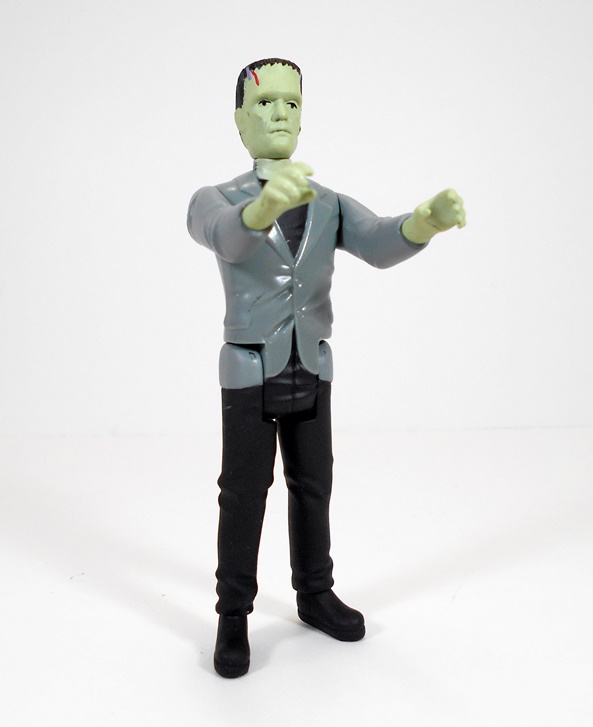 Frankenstein’s monster is a really nice sculpt and packed with some cool detail for a retro-style figure. The bolts in his neck are there, albeit they are a little hard to see. He does have a little paint applied to the scar at the top of his hairline. There are stitching marks around his wrists and his shoes even feature little lifts. You get the usual little sculpted wrinkles in his jacket and trousers. Is it a great likeness to Karloff in the makeup? Nah, not really. Karloff isn’t even credited anywhere on the card, but it’s an iconic enough look that it works fine for the figure. My one complaint would be that his clothes are way too clean and tidy. Some sculpted tears and weathering would have gone a long way. Still, this guy is a solid figure! 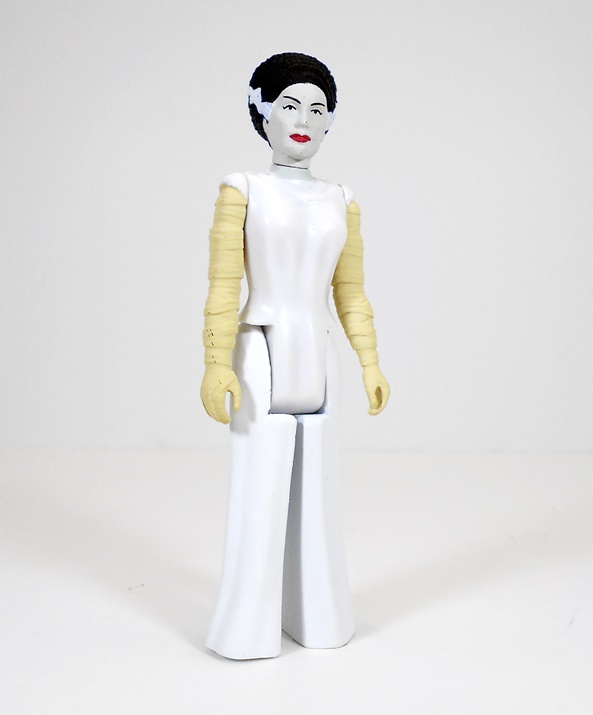 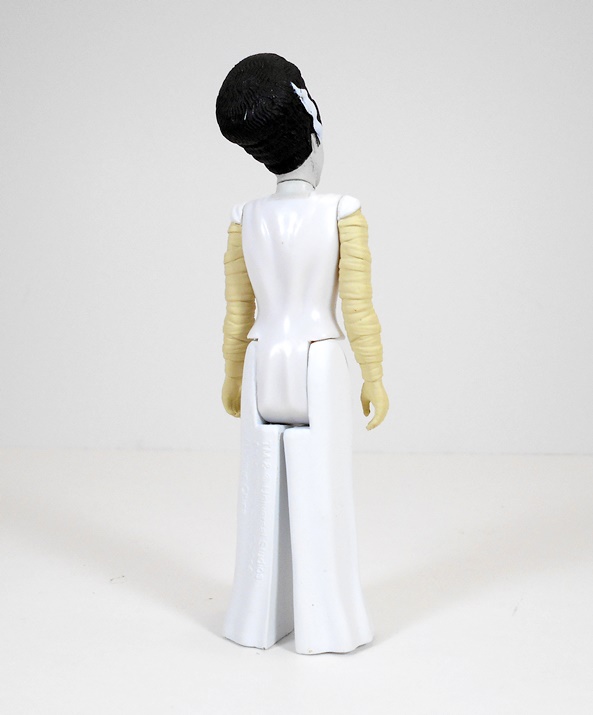 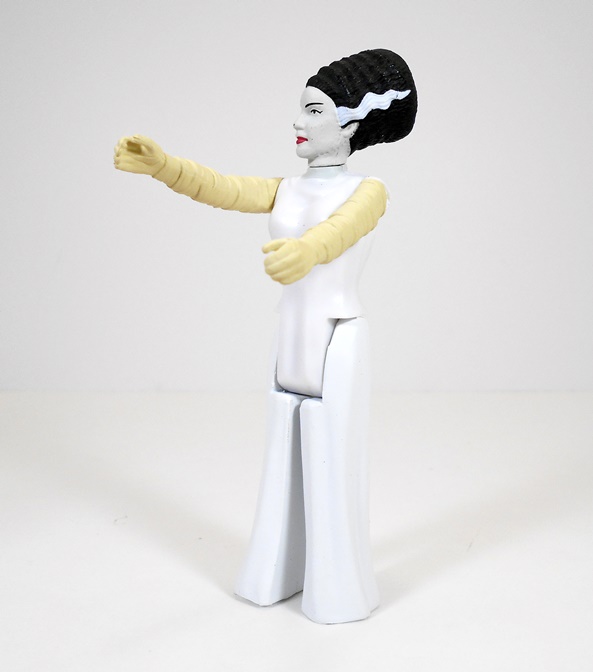 The Monster’s Bride is also a really nice effort and a treat, since she never got a slot in REMCO’s line. I guess the female figures got slighted back then too. There’s very little detail on her torso and the lower half of her gown. Technically, she doesn’t even have feet, just a split down the middle of the skirt, similar to what Kenner did with their robed figures like Obi-Wan or Anakin Skywalker. Her arms, however, do have some great sculpted bandages and their yellowed color helps to break up all the white from the rest of her outfit. The head sculpt on this figure is really good for a vintage-style head, but the likeness isn’t really there, despite the fact that they credited the actress’ likeness on the back of the card. Lanchester had far more pronounced eyes. That having been said, the hair sculpt is fantastic and for a more generic version of the character, I think the head works brilliantly.

Moving on to The Invisible Man, this was obviously a figure where likeness wasn’t an issue because Dr. Griffin’s head is all bandaged up. That having been said, the attention to detail in the bandages is excellent. If you look closely, the pattern of the wrappings even mimic how they looked on actor Claude Rains. The rest of the figure consists of a sculpted smoking jacket, which looks good, but doesn’t really attempt to recreate the complex checkered pattern on the one worn in the film. Going in, I wasn’t sure I was going to like this figure all that much, but I think Funko did a pretty solid job on him. 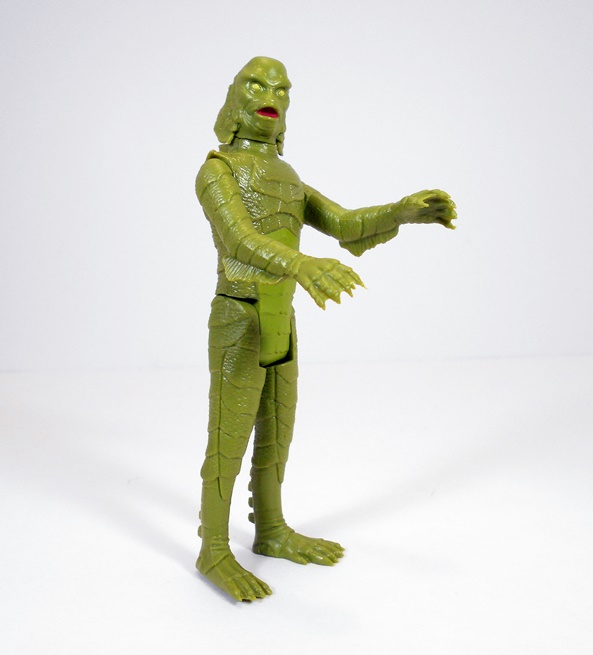 Last up is Gillman and I gotta say, Funko did an amazing job with the sculpt on this guy. The texturing, the fins, the segmented plates of his chest are all lovingly recreated as is the frightening head of the fish-man itself. There are sculpted wrinkles at the ankles that look like they were going for a figure based on the actor in the suit, rather than the real creature. Intentional or not, it’s kind of meta and I dig that a lot. With the sculpt being so good on this figure, I kind of hate to knock it, but I think the paint could have been better. There’s are very few paint apps to speak of at all and here’s a case where I think the coloring on the REMCO figure worked better for me. But don’t worry, Gillman, you’re still a great figure.

As with Series 2, these figures retail for around $10 each, but I was able to do a little better on some. They’re readily available at all sorts of e-tailers and there are even some variants out there if that sort of thing is your bag. I once likened the ReAction line as potentially being the Atari 2600 E.T. cartridge of the action figure world and Funko does indeed seem to be unleashing a torrent of these figures that very well may one day be filling a landfill out west somewhere. Obviously, I’m not here to say that all their efforts are without merit. Indeed, you’ll be seeing ReAction figures featured again here on FFZ and probably sooner than later. For now, all I’ll say is that if nothing else great comes out of the somewhat obnoxious flood of Funko ReAction figures, I’ll still consider these Universal Monsters figures as well worth the effort. These don’t feel like they were “phoned in” to turn a quick buck. Everything from the card art to the character selection to the figures themselves feel like a love letter to the old REMCO line and all the terrible Marty McFly and Pulp Fiction figures can’t wash that away.