It seems like forever since I last dipped into my stack of Figmas or Figuarts, so I’m remedying that today by opening a figure that is long past due. Even way back in August of last year, when I featured Figma Kirito, I had poor Asuna waiting to be opened and I guess she just got buried by other receivings, and further buried by a lot of unfinished business with Figuarts Sailor Moon. I’ll get to it eventually!!! In this case, however, it’s kind of ironic that it took me so long to opener her, because when I missed out on the original release, I came pretty close to paying an awful lot of money for this figure. Luckily, I procrastinated and like Kirito she got a re-release at a far more reasonable price.

I always love the Figma presentation. It’s a window box that shows the figure and accessories quite nicely. It’s compact, relatively understated and just feels so simple and elegant. The fact that it’s collector friendly is a must, because there are so many accessories and extras to keep track of. You also get shots of the character on the side panels, which is great for easy reference because I keep my Figma boxes lined up on a bookcase shelf. Obviously most of the copy on the box is in Japanese, but you do get a little bit of English. SAO is pretty far up there on my list of favorite anime series, so even though it took me a while to get to her, finally getting this figure on my shelf is a pretty big deal for me.

I loved Asuna in SAO’s first arc, not so much later when they turned her into a damsel in distress and all she had to do was sit in a cage and get terrorized for most of the series. Original Asuna was refreshingly strong and skilled and her Knights of Blood costume is my favorite design in the series even though I’m not sure I can put my finger on exactly why. I guess there’s something about that immaculate white outfit with the striking red and orange trim, and the smattering of cruciform emblems that just looks so damn good. The ensemble is rounded off with some really nice silver paint on her chest and belt. I can’t think of anyone besides Max Factory who could have recreated this outfit so brilliantly in a figure in this scale. The contrast of colors and the various layers make for an absolutely gorgeous figure. 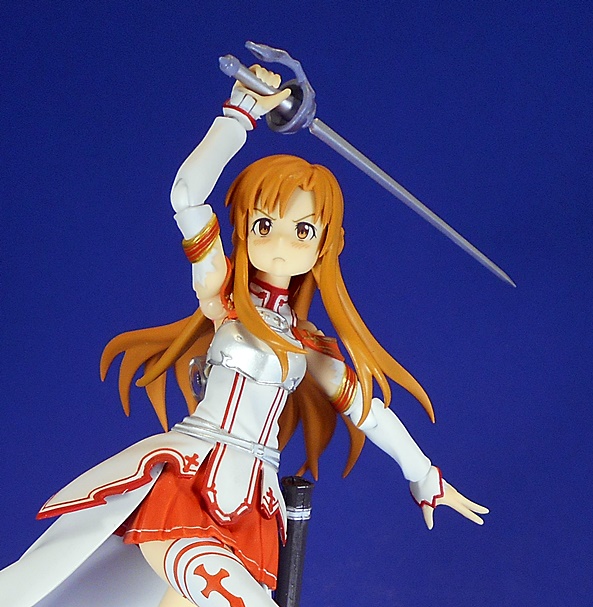 Asuna comes with a total of three portraits, although the amount of variety here is a little deceptive. The figure is boxed with a happy face and the other two are her angry and determined fighting faces. They’re very similar only one has the eyes looking off to the side and the other has a little flushed color in her cheeks. As always, changing these faces is as easy as removing the front hair piece and doing a quick pop and swap. She has four bendy strands of hair that fall down, two in front of her shoulders and two behind.

The rest of her hair cascades down her back on a ball joint and herein lies my one and only nitpick about the figure. The hair has to be angled pretty far back to make room for the stand’s back peg. That’s fine for action poses, but for simple standing poses, it’s not always what I’m going for. Now, in fairness, they did include an adapter piece to help, but it’s still limiting in what it will do. Yes, it’s possible to get Asuna to stand without being attached to the arm and base, but it’s not easy. Between her skirt and all that hair, she tends to be a little back-heavy. But if that’s the worst thing I can come up with, this figure is still doing pretty fine by me.

Of course, being a Figma Asuna comes with a bunch of extra hands. The figure is boxed with a pair of relaxed hands, but you also get a pair of splayed hands, fists, regular sword holding hands, and a pair of angled sword holding hands for thrusting. The hands swap out really easily, but I had to be extra careful not to lose the tiny cuffs that just float between the arm and hand. Once you take the hands off, there’s nothing holding them on. 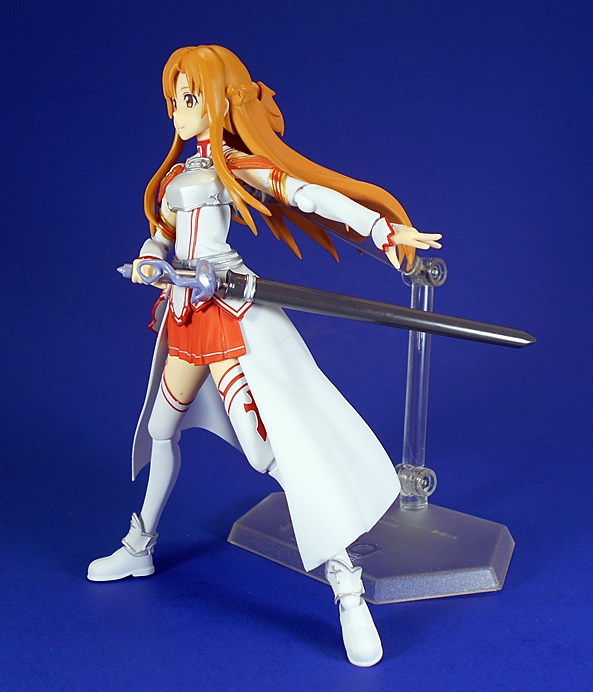 And speaking of swords, Asuna comes with two. You get Lambent Light in its red scabbard and what I assume is Wind Fleuret, although the hilt doesn’t exactly match what I remember seeing in the anime. Then again, it’s been a while. As with Kirito, these blades are extremely fragile, probably more so in this case, but they look great and fit into the scabbards well enough so that they aren’t difficult to remove. The scabbards peg into a keyhole on the side of her skirt. It’s really hard to decide which of the blades I like more on the figure. Chances are I’ll go with Lambent Light just because the scabbard adds a little extra pop to the color scheme.

Lastly, you get an effect part, which is much better than the cumbersome ones that came with Kirito. Yeah, I’m not generally a huge fan of effect parts, but I could actually see myself swapping this one out on display every now and again, whereas Kirito’s just stay in the box. 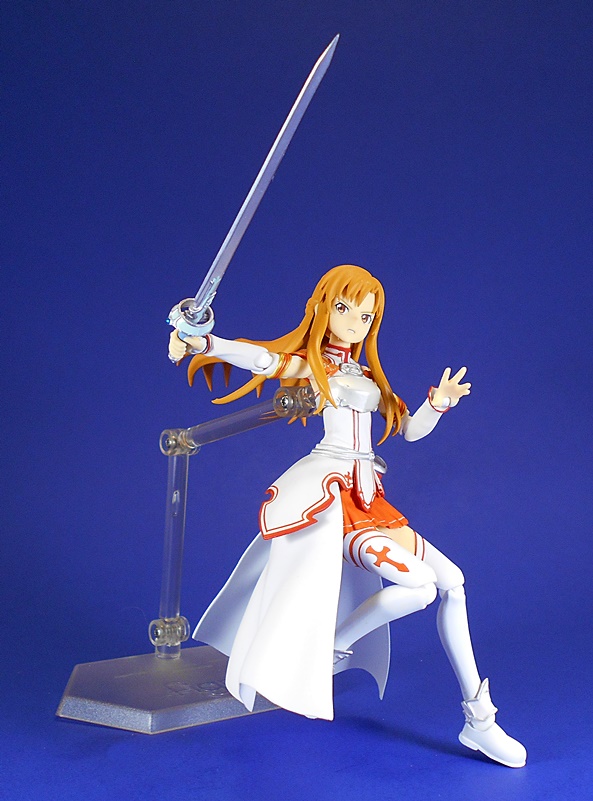 The articulation here is exactly what I’ve come to expect from Figmas and is obviously excellent. The joints are all solid and have a great range of motion. The skirt does impede her lower half a little more in some cases, but there are few poses that I tried to do that I couldn’t achieve. And with the extra hands and expressions, the sky really is the limit. New Figmas reside on my desk for a while so that I can keep picking them up and playing with them and Asuna will be no different. 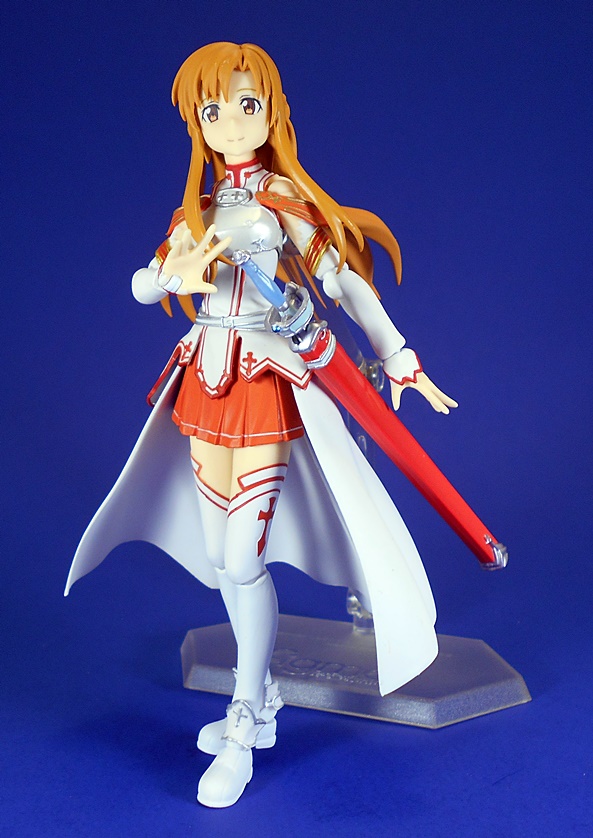 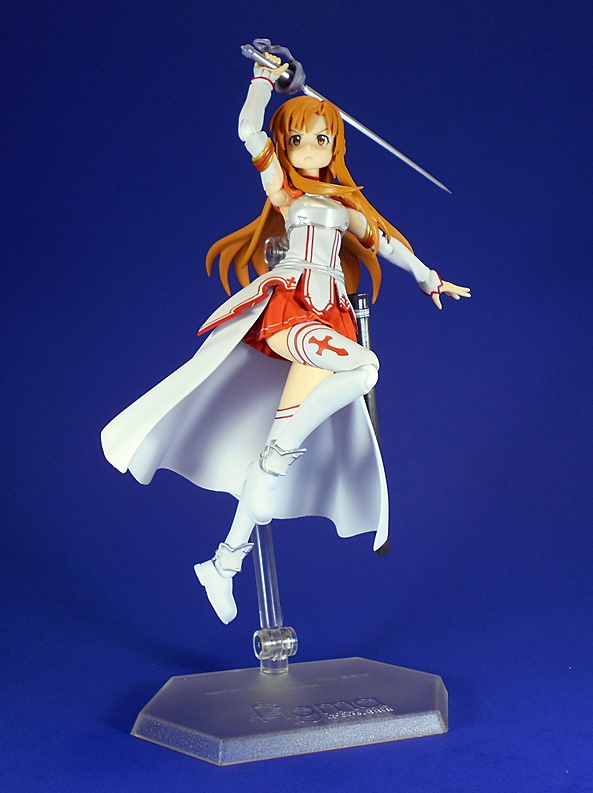 As I mentioned earlier, I came damn close to paying over $100 for Asuna, but thankfully Max Factory re-issued her and I was able to get her for half that, and I’m pretty sure she’s still readily available at a good price. I can’t say enough how much I adore this figure and having her on the shelf just makes me want to see Figma roll out some more SAO loving. While I’m not as big a fan of the Gun Gale arc, a re-issue of Sinon would be most welcome and I’m still on the fence over whether or not to pick up that version of Kirito. The Alfheim version of Asuna will likely be my next target, and I should would enjoy it if they released a Leafa.