It’s time to gush once again all over another of NECA’s Ultimate figures. And what better subject for an Ultimate line of figures than the Ultimate Summer Sci-Fi Action Blockbuster, Terminator 2? This is the third time this series is dipping into the Terminator franchise, and we know it won’t be the last. I’ve already checked out the T-800 and Sarah Connor, so today let’s check out the relentless, liquid metal killing machine that is, the T-1000!

As usual, the figure comes in a collector friendly window box with a front flap. The deco here matches the other T2 figures perfectly and these look amazing all lined up on a shelf. You get some great stills from the film as well as shots of the figure itself. I’ve already gone on and on about how much I love these boxes, so rather than dawdle any longer, let’s look inside…

Yup, there’s a reason this line is called Ultimate. I mean, just look at all that stuff! Naturally, I’ll be looking at everything in turn, but let me just run it all down here: An automatic pistol (missing from the tray because I already put it in his holster), a gun-holding right hand, two pry bar arms, two hands with pointy metal index fingers… and if all that isn’t enough you get an extra head, which is split down the middle, and a head and front torso with bullet damage. Wow! The tray is set against an illustrated backdrop that looks like the interior of The Pescadero State Hospital. Brilliant! 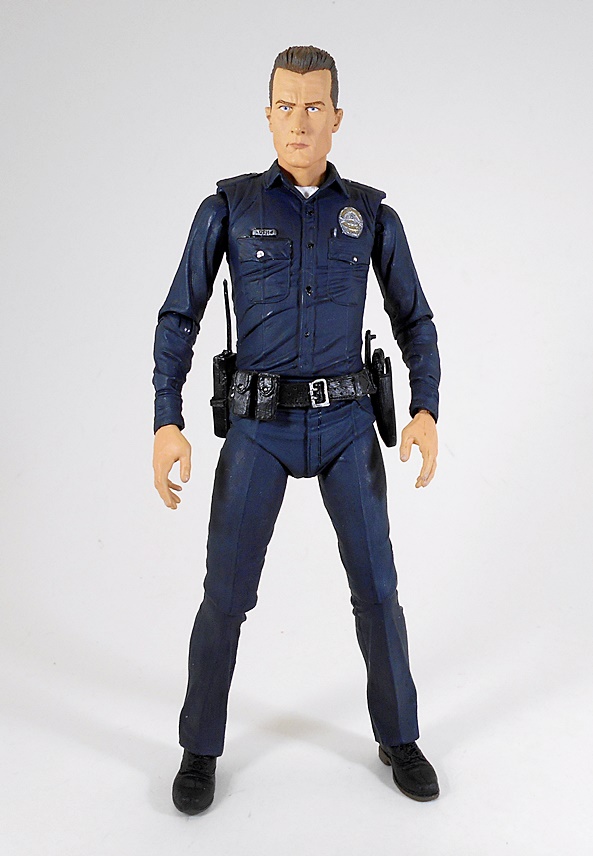 The base figure is quite solid and includes all sorts of detail on the police uniform, from the creases down the front of the trousers, the pen in his pocket, the badge and the individual buttons and rumples across the front of the shirt. Apart from some seams running down the sides of the torso, it’s pretty hard to tell that the top half of this figure is meant to split apart and take a replacement.

The belt rig is quite detailed and includes a functional holster for his pistol and some non-removable items, like a police radio and a pouch for his handcuffs. Despite having the removable front torso, the articulation is not hampered at all. It does look like they probably built the rotating shoulders on exposed front pins to make it work, but you still get a great range of motion there. You also get rotating hinges in the elbows, knees, and ankles. There are ball joints in the hips, wrists, waist, and neck.

The likeness to Robert Patrick is pretty spot on. I really dig the way his eyes are painted to look up so they appear natural when the head is pointing down slightly. It achieves that wonderful stern and creepy look he frequently gave in the film, especially when waggling his finger like a cross teacher. No, he doesn’t come with a waggling finger, but let’s get into some of the stuff he does come with… 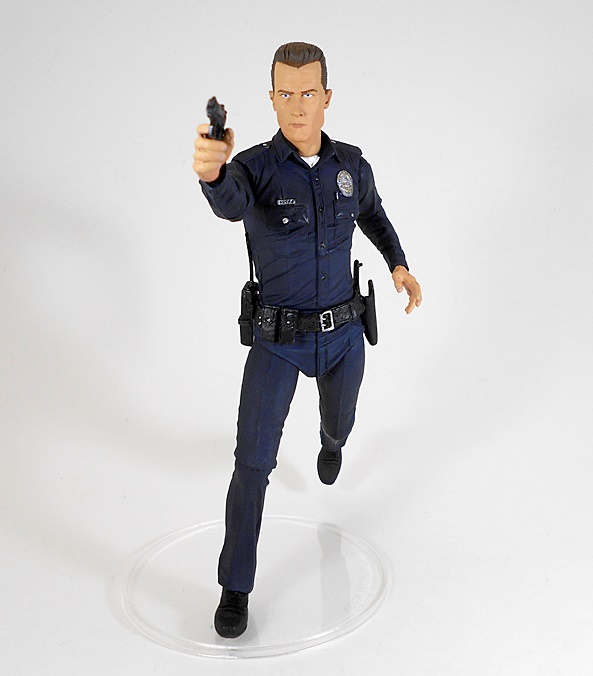 The pistol is pretty straightforward and as mentioned it fits in his holster and he comes with a hand made to hold it. It’s the only weapon included with the T-1000 because, let’s face it, he is a weapon unto himself. His liquid metal construction makes him the equivalent of a humanoid swiss army knife.

The two metal pointy “I know this hurts” fingers are just pop-and-swap hands with one metal finger longer than the other. The metal index fingers are naturally a little bendy so you need to finesse them a bit, but they look great. Next up, let’s swap some noggins…

It’s a testament to the film that they were able to pull off all these Looney Tune injuries and still have it work, oh so well. The first one that the figure lets you recreate is the split head as it’s in the process of being “zipped” back up from the bottom. I love this piece, it looks wonderful right down to the metal paint inside the head. Mine was actually pretty tough to get on the figure, though, and I had to do a little shaving inside the socket to finally get it in.

Next up is the the hole head that comes attached to the swap-out torso front. The front of the torso simply un-pegs and pulls off allowing you to peg on the replacement. Oddly enough, the first time I’ve seen engineering like this was in Character Options’ Doctor Who line. They did something very similar for their Professor Bracewell figure as well as the Time of the Doctor 11th/12th Doctors. It’s a great gimmick that allows a large variation to the figure without having to create a whole new body. The metal impacts from the bullets are very well done.

The head is no slouch either. Again, there’s some wonderful paintwork inside the hole and along where the “flesh” has changed back into metal. It’s also worth noting that since the neck posts are on the torso fronts, you can use any head with either torso, so mix and match until your heart’s content!

When I’m writing up these features on NECA’s Ultimate line, I always feel like I should play it off like one of those infomercials. You get the gun, the gun, hand, the pry bars, and the pointy metal figures. Now how much would you pay? But wait… there’s more… you also get the two extra heads and the replacement torso… all for $21.99! Yes, that’s how much this figure cost me, and I’m continually stunned that NECA can put these figures out there at such great prices. Hey, I love my Marvel Legends as much as the next guy, but there’s so much more craftsmanship that goes into these NECA Ultimate figures and all at the same price, not to mention that they’re based off of a 25-year old film.