It’s an exciting (and somewhat delayed) Anime Saturday today, because not only am I checking out a new KanColle figure but also my very first Figma FigFix! FigFix is a relatively new(ish) line, which I believe started in 2014, and the best analogy I can make is that these are sort of to Figmas what Figuarts Zeros are to Figuarts. In other words, non-articulated. But keep in mind, that’s coming from someone who has yet to own a Figuart Zero, so that analogy could be flawed. Anyway, I picked up Shimakaze because she’s a real hoot in the series and right now her actual Figma is netting prices that are a bit too rich for my blood, so I thought this would be a good way to get her into my collection, at least for now. 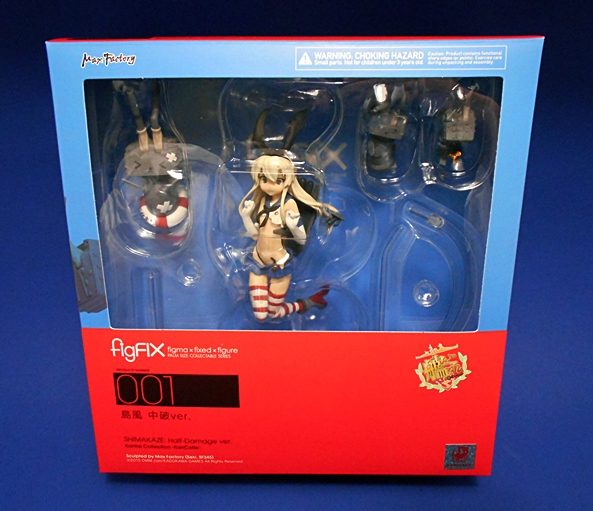 The package is very similar to that of a regular Figma and distinguished mainly by the brighter colors. You still get a window looking in on a tray with a lot of parts. If it weren’t for the FigFix on the box, I’d be hard pressed to identify this as something different, at least at first glance. Shimakaze is the very first release in this series! Let’s get it open and set her up. 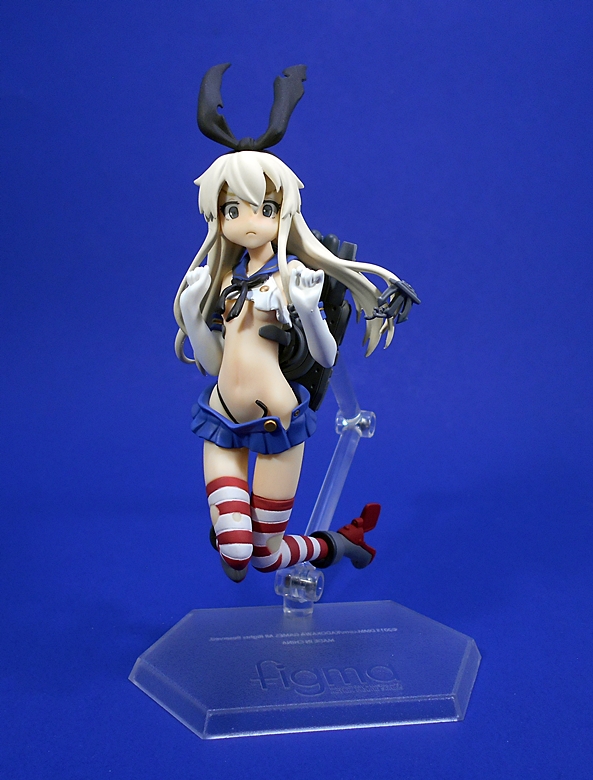 Shimakaze is displayed on a standard Figma stand, which is necessary because her pose has her hovering with legs bent and not able to stand. I really enjoy the fact that Figma went with the “half-damaged” version here, because it still allows room for this and the regular Figma release in any display. Speaking of which, Shimakaze is not only perfectly scaled to display with regular Figmas, but her face is also removable and compatible with the faces of the regular Shimakaze Figma, so if you have the other figure, you can change her expression. Again, I really dig the way they made the two able to interact and compliment each other. 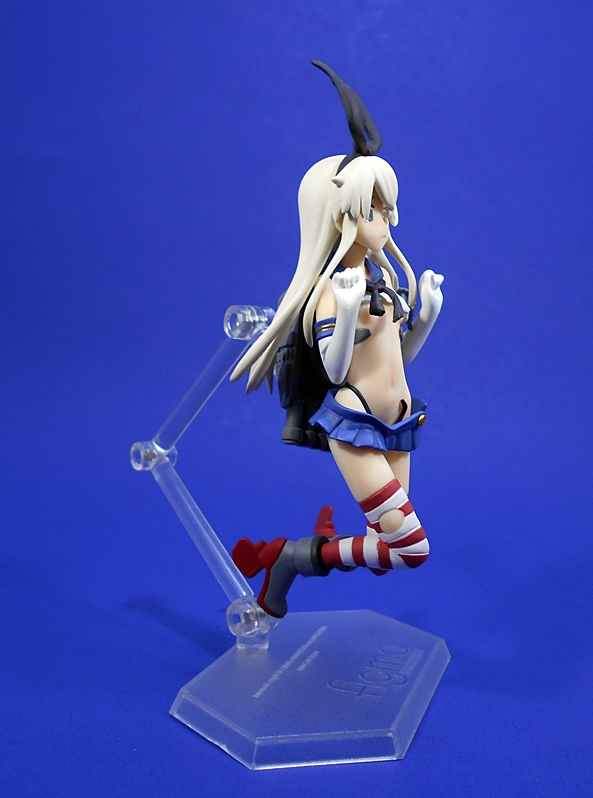 Shimakaze is clad in what’s left of her familiar uniform. Her top has mostly been obliterated leaving behind just enough for a smidgen of modesty. Her low riding skirt shows that one of the straps on her underwear has snapped, and her colorful, candy-striped stockings have holes in them. About the only thing that’s survived intact are her rudder boots and her gloves. As always with Figmas, the paint is bright and clean. 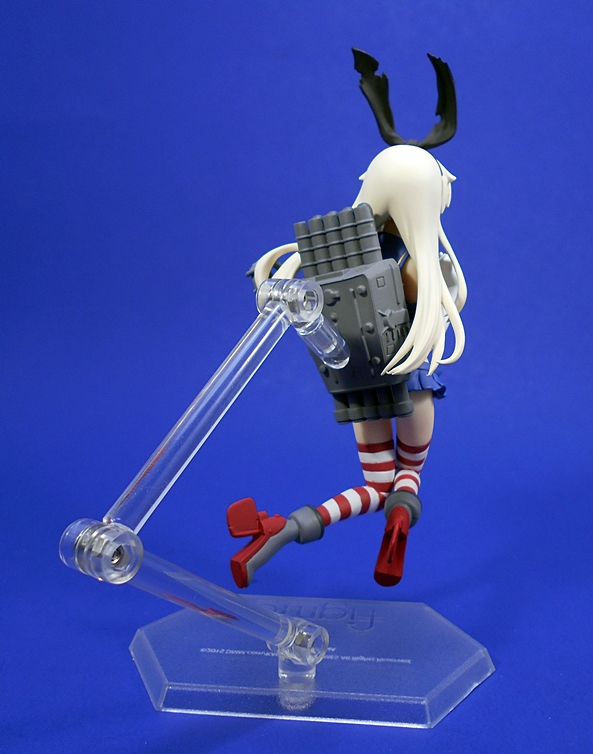 On her back, Shimakaze is armed with her five-tube torpedo launcher, which sets her apart from Fubuki, Mutsuki, and Yuudachi who all wear their torpedoes on her hips. This also makes her attack style rather distinctive and I love the way she drifts to the side and bends forward to unload these babies into the water. The launcher assembly is removable from the figure and the arm for the stand pegs right into it. 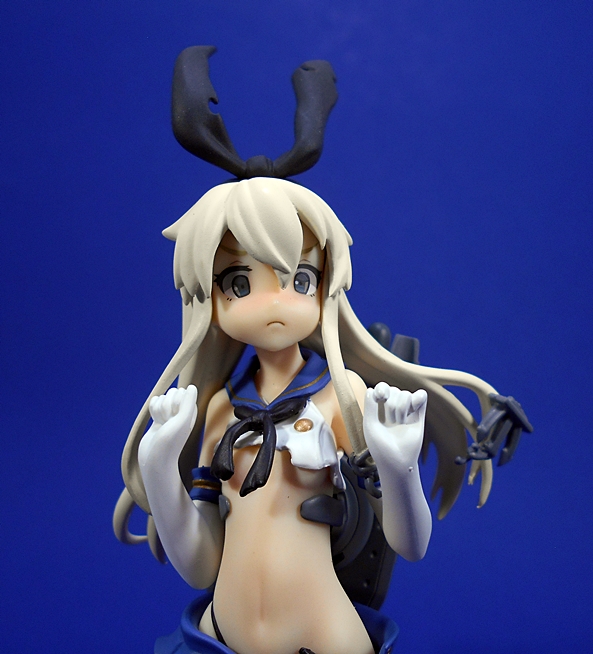 The portrait is excellent. She has a hilarious surprised expression as if she still can’t believe she got hit. her detached anchor is sculpted to part of her hair as if its been blasted off. Even her bunny ear hair ribbon is tattered. The skin tones on the figure are smooth and even and she even has a little bit of red in her cheeks showing that she’s embarrassed the enemy scored a hit on her. The neck is the only articulation on this piece, and once again, you can change out the expression if you own the regular Figma of the character, although I think the expression here is perfect. 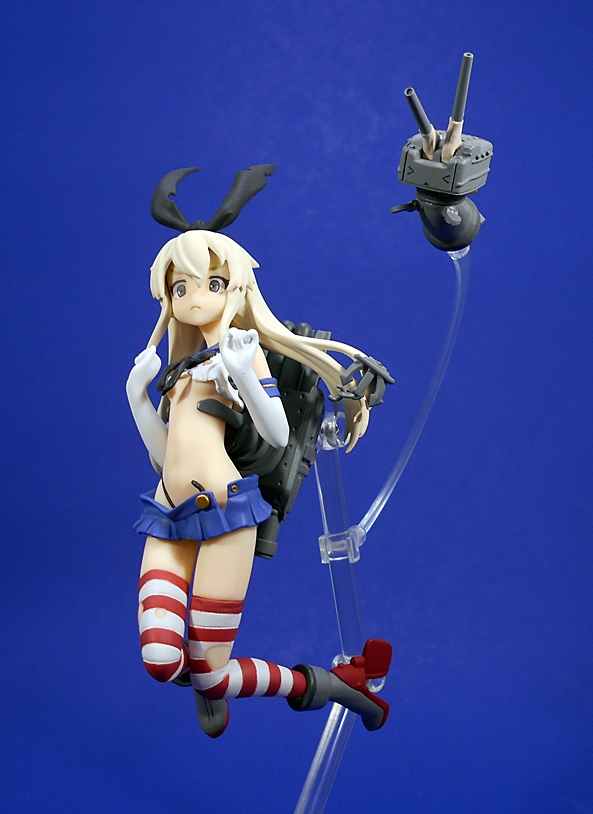 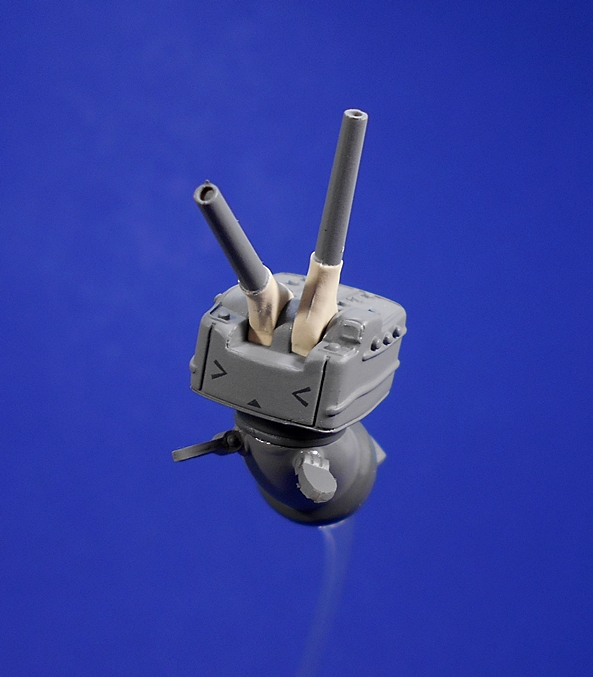 Of course, you can’t have Shimakaze without her posse of Rensouhou-chan backing her up. These adorable little animated gun mounts come in three different sizes and have some articulation in their heads and guns. The smallest pegs into an arm that curves up from the main stand to allow him to hover just over her shoulder. 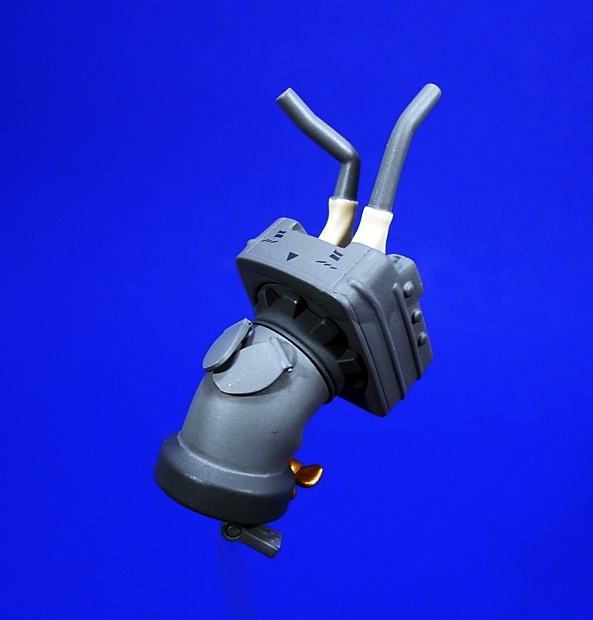 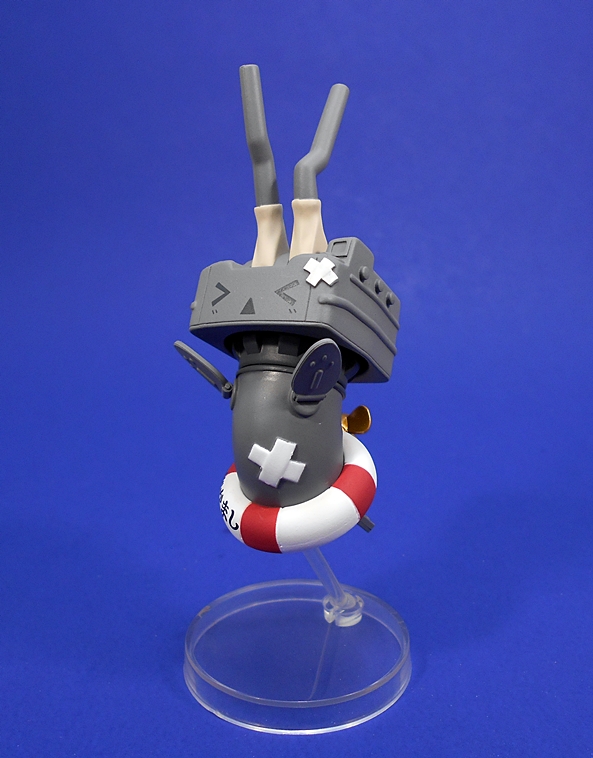 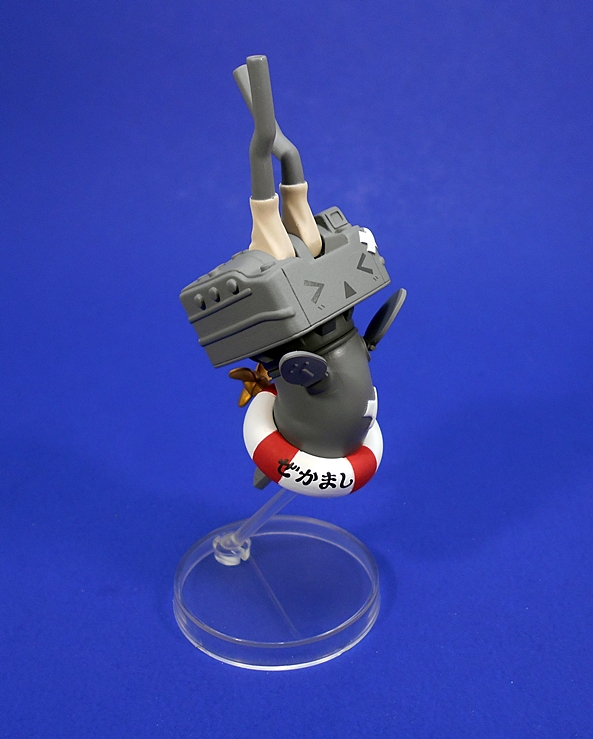 The other two have their own stands with ball jointed arms to allow you to customize your display exactly the way you like. Each of these little buggers are also depicted in damaged mode with their guns bent and the look of anguished defeat on their adorable little faces. The crossed band aids on the biggest of them is a wonderful little touch. Of course, these little buggers will make excellent accessories for the regular Shimakaze Figma as well. 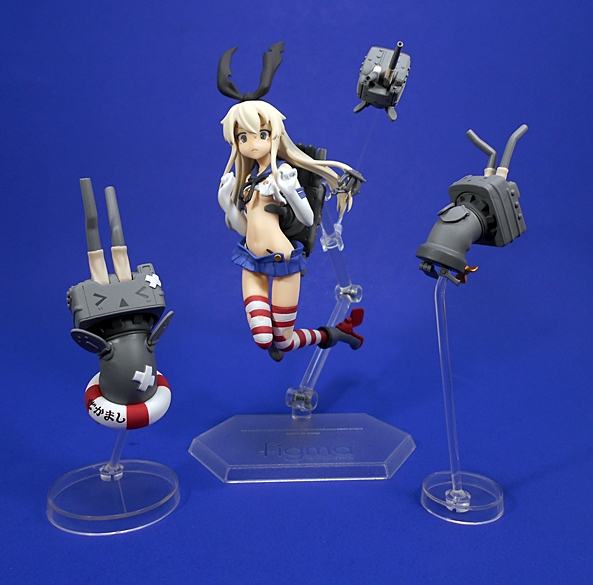 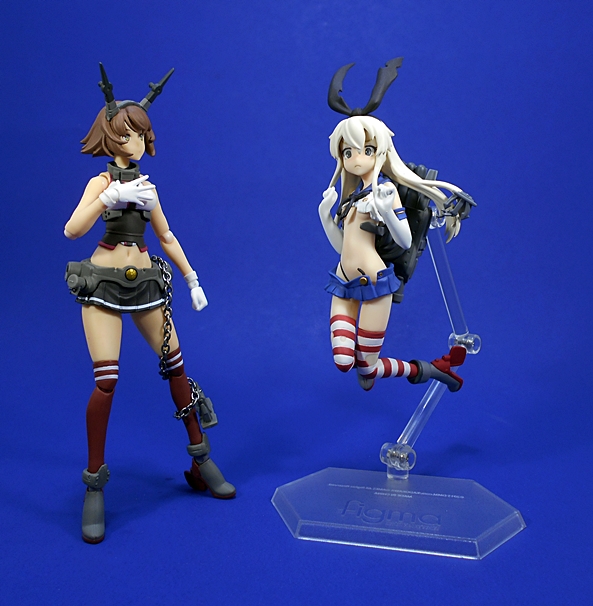 I really had no idea what to expect when I ordered this, but in the end it really is exactly what it claims to be. It’s a Figma without the articulation. It sounds like a ridiculous concept, since Figmas are all about the pose-ability, but I’m proof positive that these serve a purpose. Shimakaze’s regular Figma tends to go for around $75-80 these days, whereas I was able to pick up the FigFix for closer to $40. I wouldn’t normally find these non-articulated versions to be acceptable replacements for the regular ones, but it does offer a nice alternative in this case. I haven’t actually featured any of the regular KanColle Figmas here yet, but I have a growing collection of them and at the very least now I can display Shimakaze with them and she’ll do fine until I can track down the regular version.