By now, y’all know how much I love me my Kantai Collection and the exploits of the Fleet Girls. Well, then it should come as no surprise, that I’m also extremely fond of Arpeggio of the Blue Steel. It too has WWII style ships, a naval war against alien fleets, and some adorable girls at the helm. In reality the two series are really quite different, but they’re both near and dear to my heart. Figma didn’t go too deep with AotBS, but they did produce a figure of Iona, the Mental Model of the renegade Fleet of Fog submarine I-401. Not to be confused with the I-401 from KanColle that I looked at last week. See? Similar, but different. 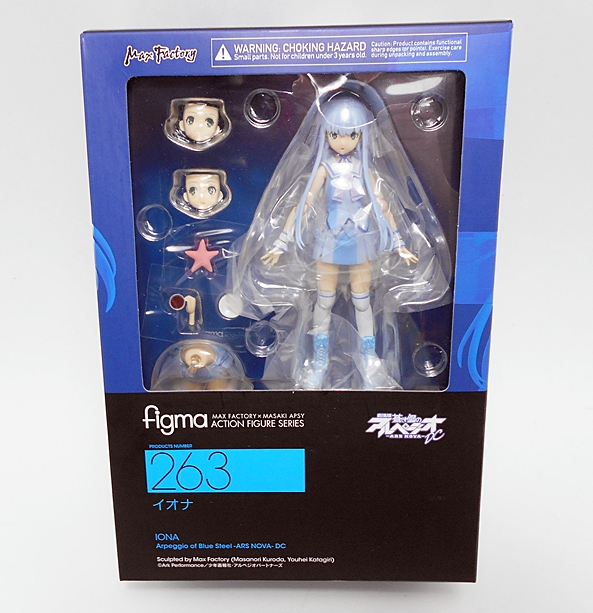 Iona is #263 in the ongoing Figma line. She comes in one of the smaller and more compact window boxes with a blue and black deco. The window gives you a glimpse of the figure and all the goodies inside. As always, it’s collector friendly and even has one of those branded Figma ziploc bags to help you store all those parts if you don’t want to keep the box. I’ve been really pressed for time this week, so today’s Feature will be relatively quick, but Iona is a fairly simple figure, so I think I can do her justice in a short amount of time…

Here she is out of the box and looking pretty sweet. If you’re familiar with the anime, than the obvious thing to point out here is that this is not her better known, dark blue outfit. I actually like this look a lot, but I think it was an odd choice to go with for what will likely be her one and only Figma. Her outfit and hair consist of a matching powder blue, white, and lavender, all of which conspires to give her a very pale and almost ghostly appearance. That having been said, the detail here is quite nice, particularly on the laced boots and the straps that hang off her top and down across her hips.

Of course, you get a standard Figma stand with the articulated arm. From the back, you can see that her long hair is articulated to allow the arm access to the peg hole in her back. If you look closely, you should be able to make out the Fleet Insignia printed just above her butt.

It wouldn’t be a Figma figure if it didn’t come with a whole bunch of hands. In this case, there are four pairs, including: Fists, relaxed hands, splayed finger hands, and accessory holding hands. You also get a pointing right hand, and another right hand that is permanently attached to a little tea cup. One thing to watch out for are her teeny-tiny wrist cuffs, which will fall off when you swap out the hands. Iona also comes with three different swap out faces, which include a surprised expression, a neutral expression, and one with a slight smile. Switching these is as easy as always, you just pull off the front hair piece, pull off the face, tab in the new face, and replace the hair. All of the expressions are pretty damn adorable, and her large green eyes are immaculately printed on each portrait. 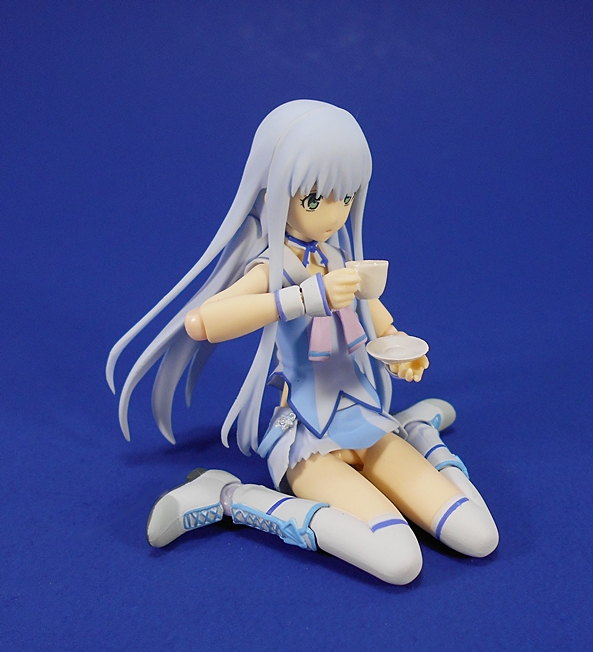 As if all that wasn’t enough, Iona also comes with an alternate lower half, which has her sitting down. This piece requires you to pop the boots off of her legs and attach them to these legs, then pull the figure apart at the waist and attach the upper half of the figure to this piece via a ball jointed peg. Here’s where I like to use the teacup and saucer that she comes with to have her taking some time off from running the I-401 and enjoy a nice cup of tea. Fair warning, the “tea” in the cup isn’t fixed in place and will fall out if you turn the cup over. If that happens, good luck finding it again! 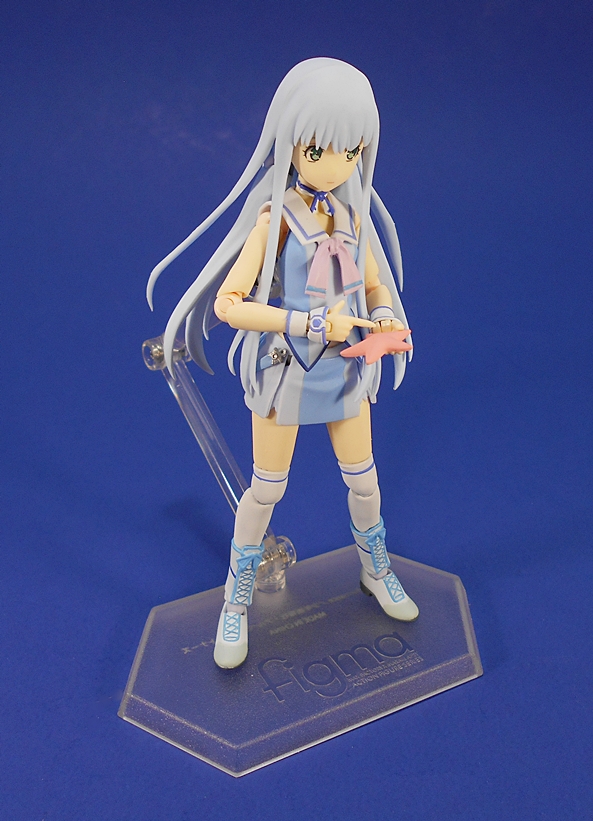 Iona comes with one other accessory and that’s a little pink starfish. She was rather obsessed with the squishy little animals in the series and those accessory holding hands work pretty well with it. 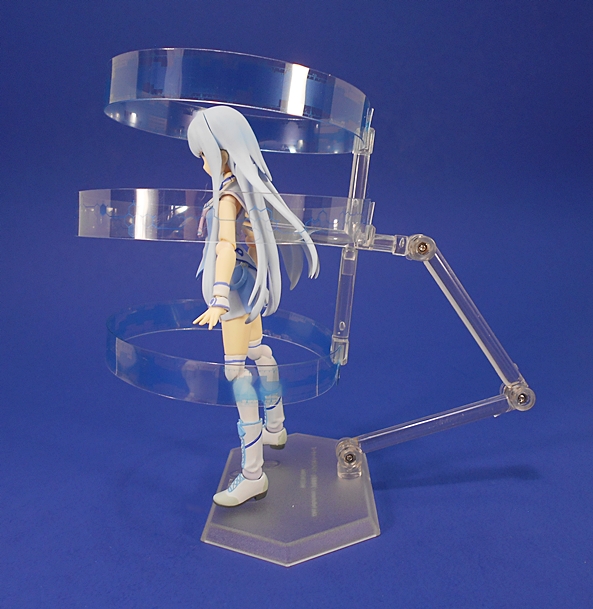 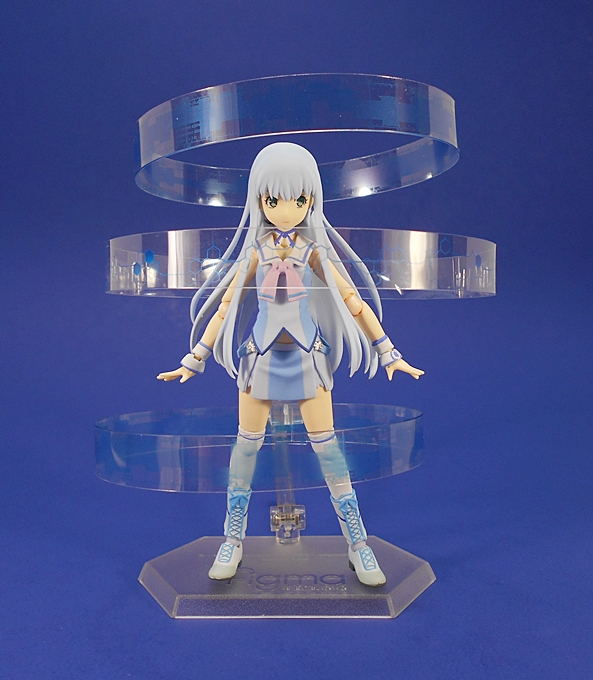 And last, but not least, Iona comes with a complex system of parts to replicate her holographic interface with the I-401. In the series, this consisted of three bands of data displays, which encircled her. Here it’s recreated with three translucent plastic strips that are attached to a special arm on the back of the figure stand. It works… sort of. I give Max Factory major credit for trying, but in the end, I had mixed results with this set up. It’s also extremely frustrating to work with and I could never get the data rings positioned just the way I wanted. A cool idea, nonetheless.

Iona is a very nice figure and I’m glad that the Figma line threw some support behind this anime, because I really do enjoy it a lot. At only 12 episodes, It’s a short run, but I’ve probably been through it three or four times. If you want more, there’s also a Manga and a couple of films. Obviously, I would have liked to see more of the Mental Models recreated in figure form, or even some of the crew of the I-401, but if they were only going to do one figure, Iona was the logical choice. She doesn’t come with as much stuff as a lot of my other recent Figma purchases, but at around $35 the price certainly reflects that. If I had one gripe, it would be the choice of costume, but I’m already eyeing some other figures of her, to get that more traditional look.