You have to hand it to NECA, they know how to harvest that 80’s nostalgia and use it to exploit us action figure collectors. Sure, they usually do it with sci-fi films like Alien, RoboCop, Terminator, or Gremlins, but landmark 80’s films are not bound to any single genre and the Rocky franchise is proof positive of that. For my money, they are Stallone’s finest body of work (although, I’m very partial to Copland as well). Rocky is quite simply the role he was born to play and it saddens me to think that eventually Hollywood will get to rebooting it starring someone else. Nonetheless, these films will always have a place in my heart, and that’s coming from someone who probably wasn’t these films target demographic. Needless to say, when NECA stepped up to produce figures for the 40th Anniversary of the franchise, you bet your ass, I was up for it. The first series consists of two versions of both Rocky and Clubber Lang from Rocky III and today I’m looking at one of each. 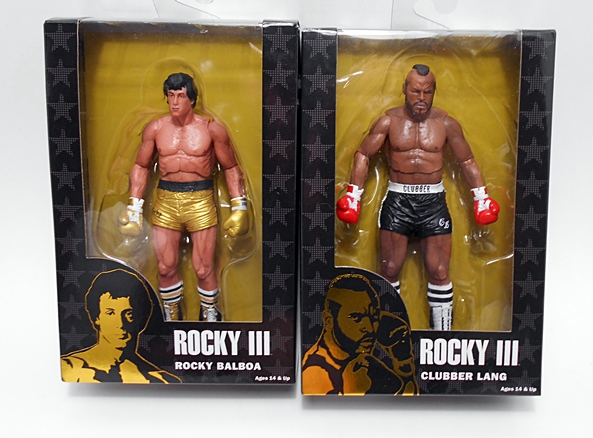 While not quite equaling the decadent packaging of the Ultimate Series, the presentation here is not at all shabby. The figures come in window boxes with some handsome gold foil work on the front portraits and on the spines. The side panels identify the character and the series, so you can line these up on a shelf and always know who you’re reaching for. This is simple, elegant, and collector friendly packaging at its best. Let’s start with Rocky! 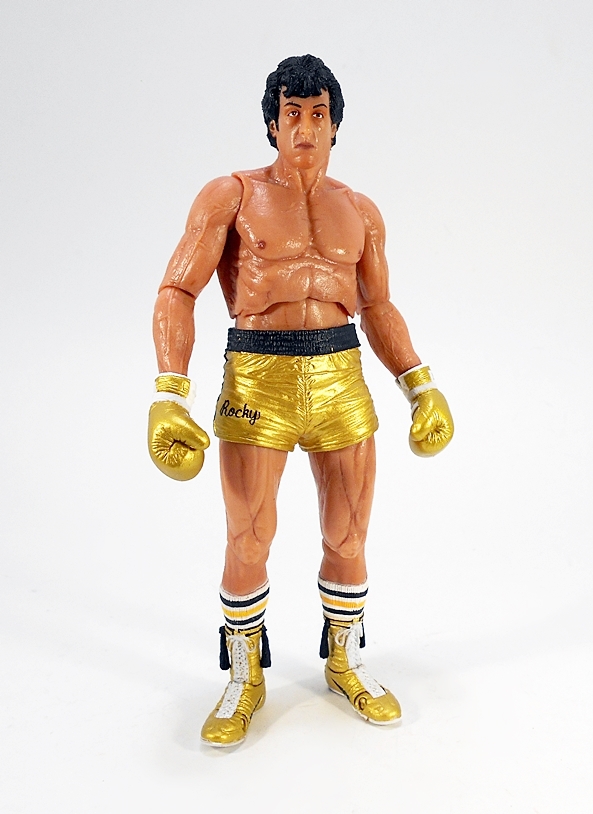 This is Rocky as he appeared in the first fight with Clubber Lang, where he got his ass kicked. I can still remember the first time I saw that fight in the movie. I was young and I recall feeling scared shitless for him because Clubber was so intimidating. Rocky sports his yellow/gold trunks, gloves, and high tops and dammit, there is some really fine detail going on here. The gloves and shorts look like the real thing thanks to a beautiful coat of paint and some sculpted stitching and wrinkles. From his name on his shorts to the elastic waistband, this is great stuff. The same goes for his footwear, which feature the same amazing gold paint and “ROCKY” printed across the backs of the high tops. 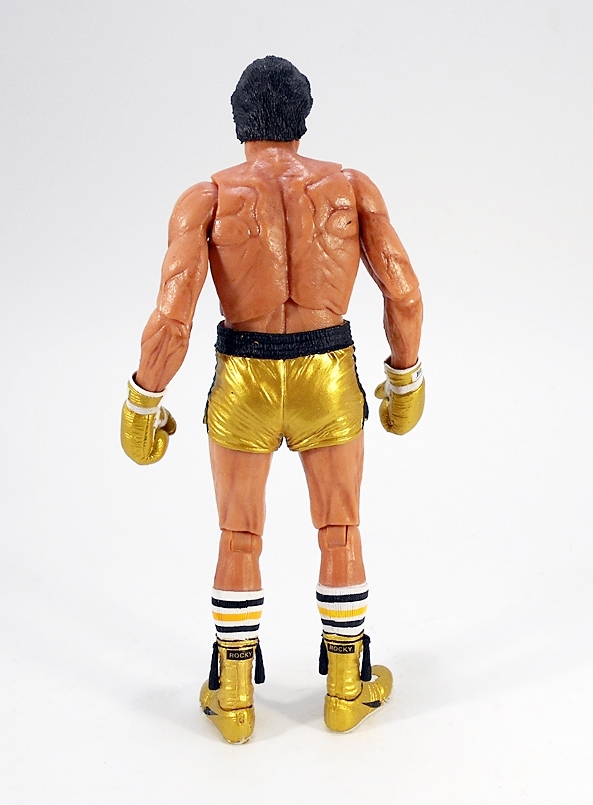 Naturally, a good portion of this figure is showing skin and NECA did a fabulous job sculpting the intricate musculature. For a company that has practically built an empire off of Xenomorphs and Predators, it’s genuinely satisfying to see them turn their attention to something as simple as human anatomy and show off how well they can do it. Now, to know me is to know how much I usually hate when companies use this type of waxy plastic for flesh, but here it works for me. The glossy sheen just communicates sweat and stress and adrenaline and fear. I love it. 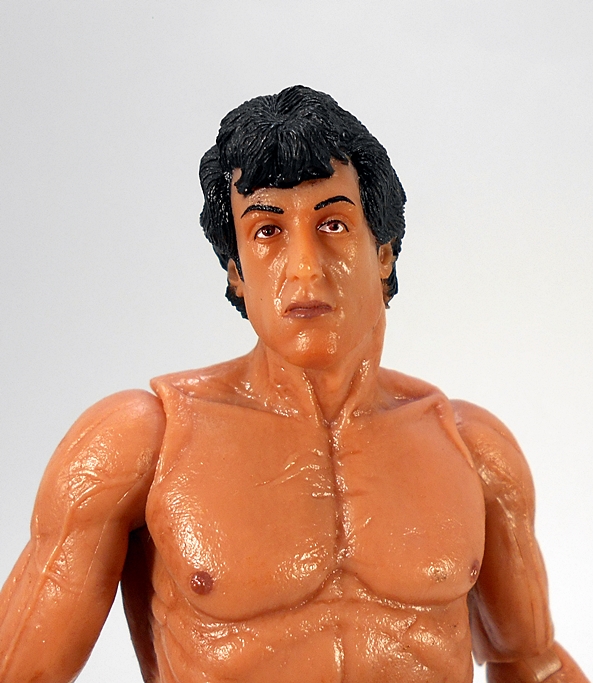 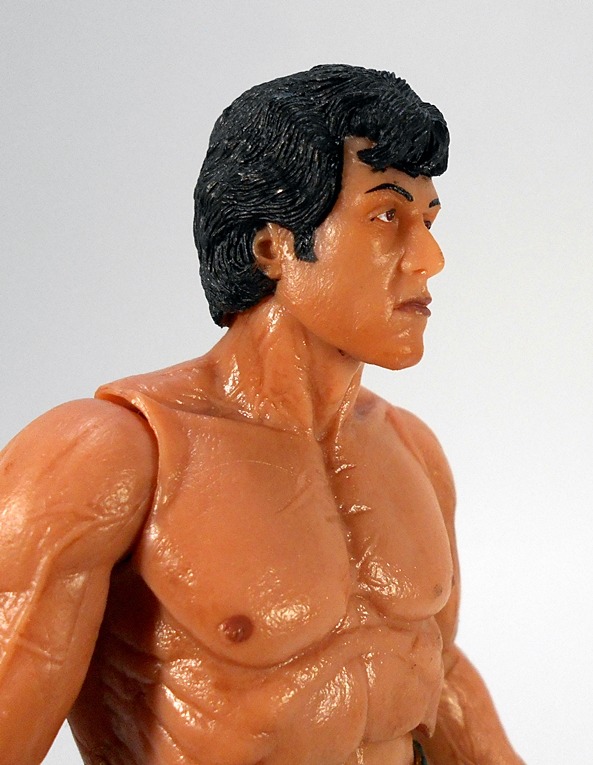 The portrait here is solid enough, although I’ll confess it leans a bit into caricature territory. Or maybe it’s just the way Stallone naturally looks. Yes, part of it is the waxy plastic, which doesn’t allow for some of the nuances of paint to bring it out. The paint could have been a little cleaner on the eyes, but it also gives him that certain “just took a blow to the head” kind of look. That all having been said, I think it’s fine. It’s most definitely Stallone. 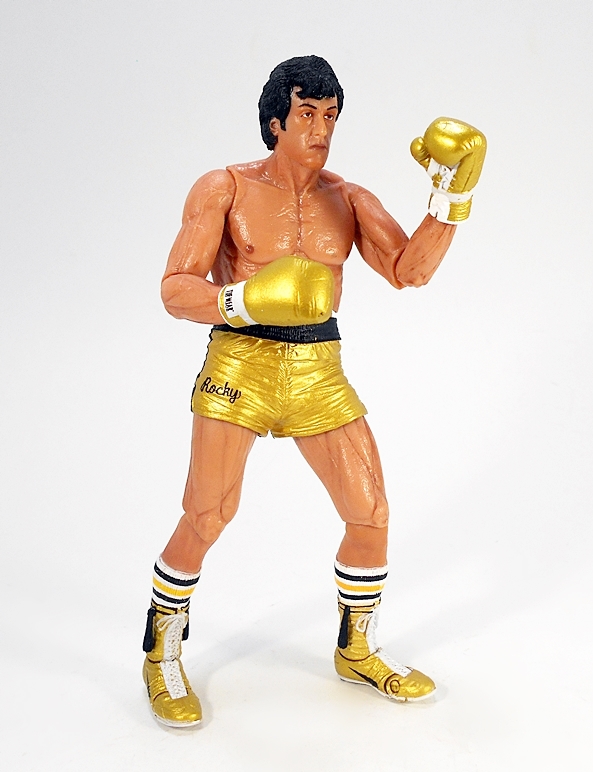 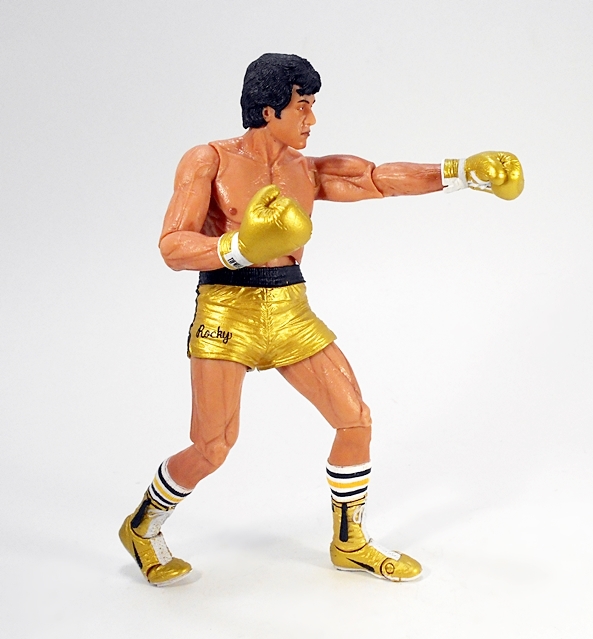 The articulation is everything I could want for a Heavyweight Champion of the World. You get rotating hinges in the shoulders, elbows, wrists, and knees. The hips appear to be ball jointed, but it’s hard to tell because the legs actually connect inside the shorts. The ankles have rotating hinges as well as lateral rockers and there’s even a hinge midway through each foot. Finally, you get ball joints in the chest and in the neck. Moving on to Clubber… 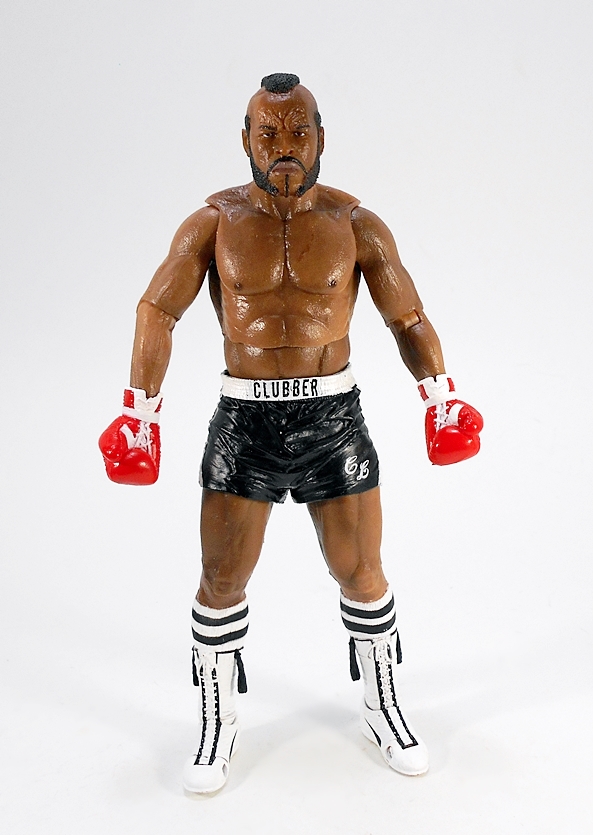 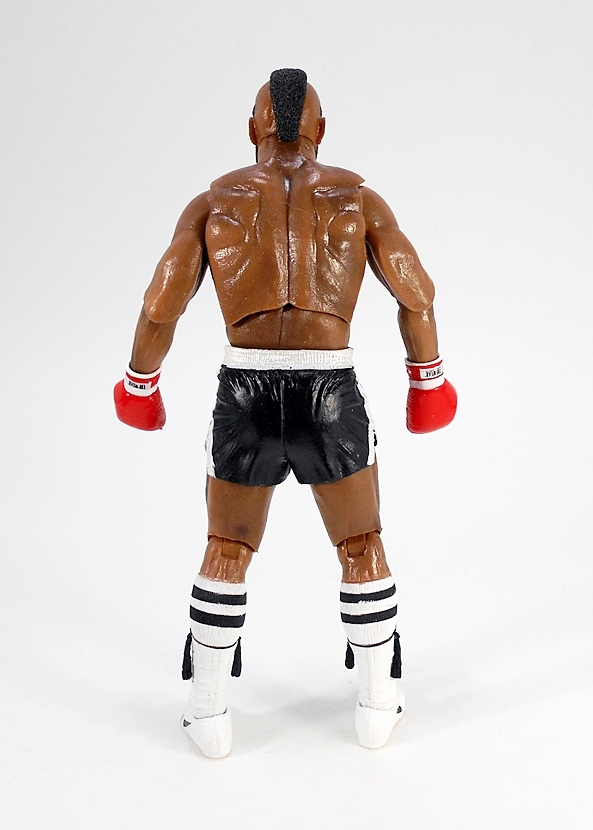 As far as 80’s film antagonists go, Clubber Lang is surprisingly high up on my list. That’s a testament to the script writers and Mr. T’s performance. I really hated this guy. He was an animal and he showed absolutely no respect to The Italian Stallion. Everything I said about the Rocky Balboa figure can be applied to this one. The colors may not be as flashy, but the black and white shorts and white and black footwear look great. He has “CLUBBER” printed across his waistband and his initials printed down on the left leg of his shorts. I really love his gloves. The red paint here is so vibrant and like Rocky’s they have “TUF WEAR” printed on them. 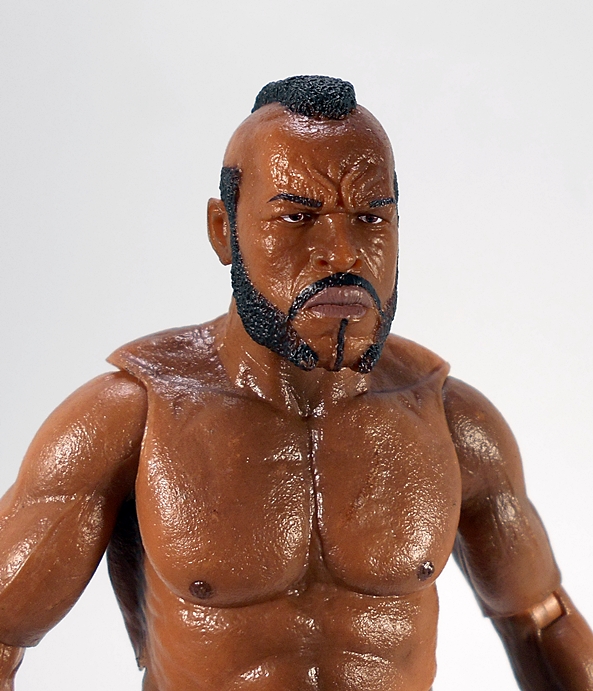 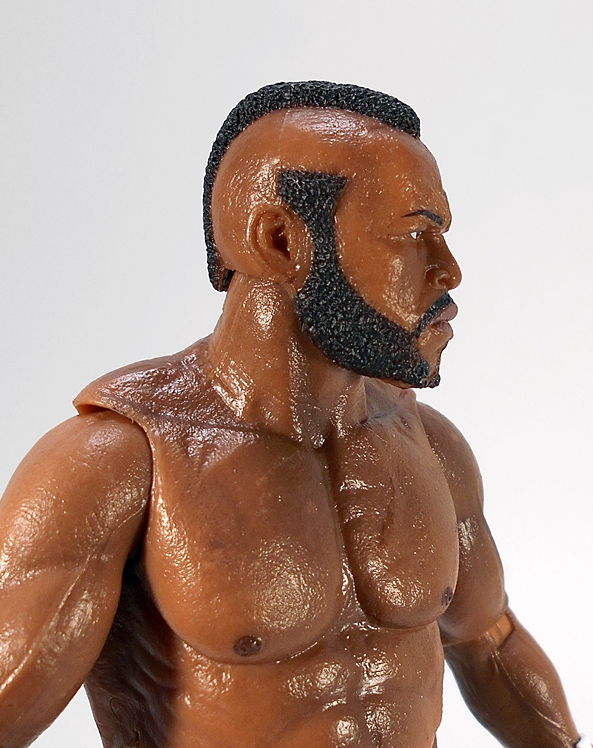 I think the key difference here is while I found Rocky’s portrait to lean a little toward being a caricature, there’s absolutely no equivocating on this one. It is an incredible likeness to the great Mr. T. The expression is spot on and pretty damn terrifying. This is quite simply top notch work on NECA’s part. 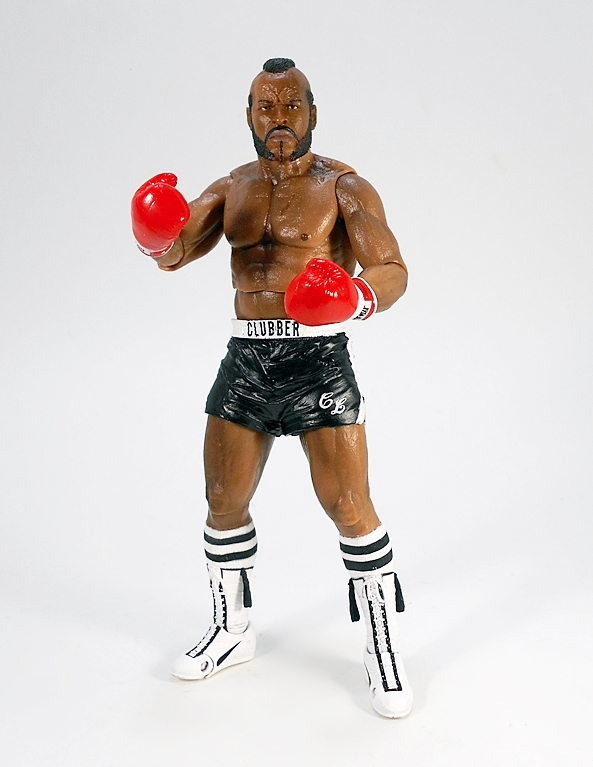 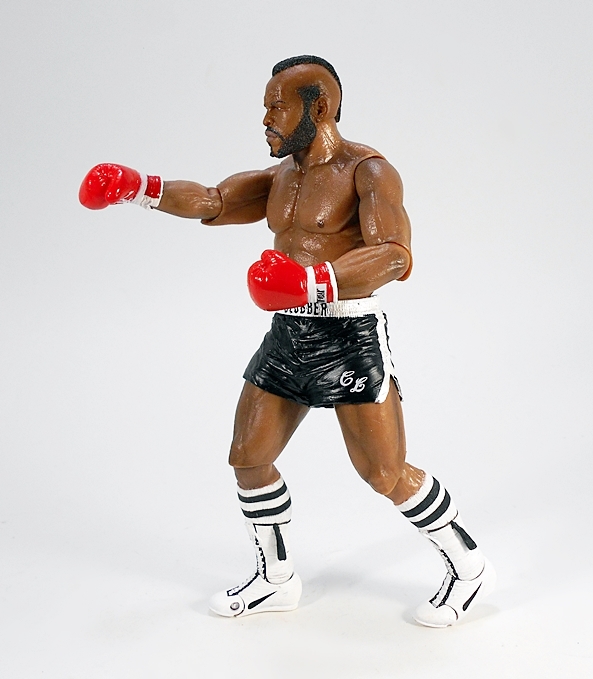 The articulation on Clubber is identical to Rocky, although it’s worth mentioning that they are most definitely separate bucks. Clubber is appropriately larger and beefier. 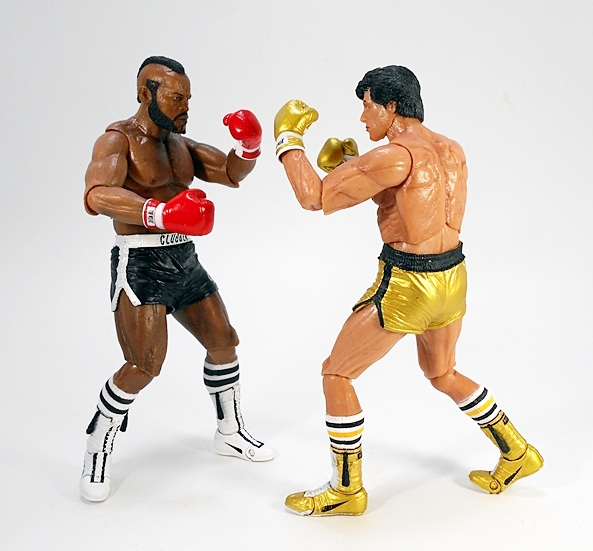 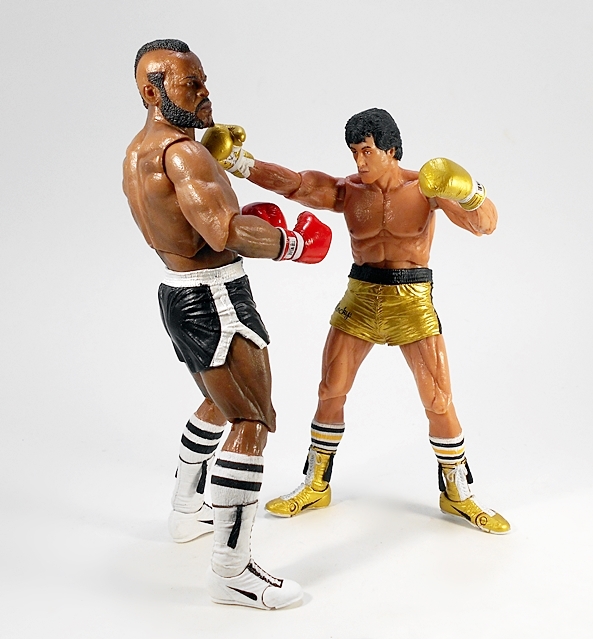 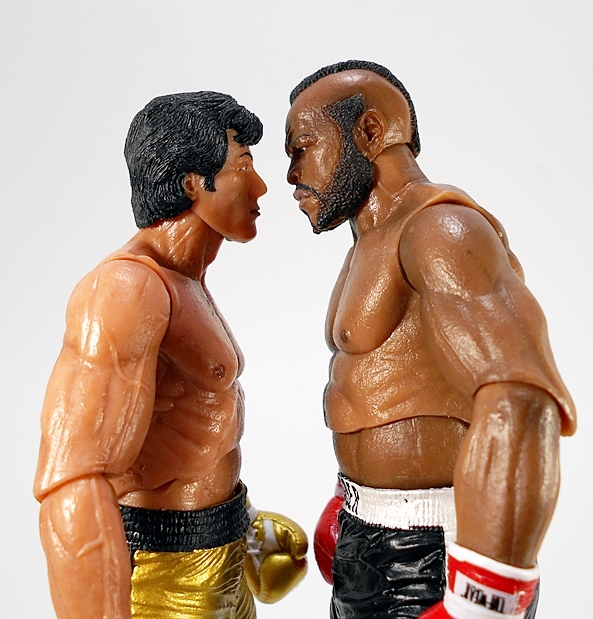 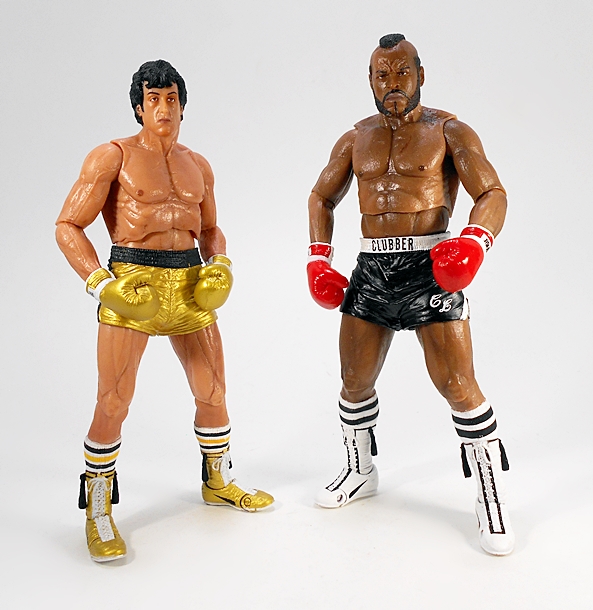 Hot damn, do I love these guys! When I purchased these, I was pretty deliberate about the ones I bought because I hadn’t planned on getting the whole Series. Getting two of each character just seemed like double dipping. Now that I have them in hand, I’m certain that I’ll be getting the other versions as well. These look so amazing in hand and on my shelf and I’m really looking forward to the upcoming figures, particularly Apollo Creed and Ivan Drago. Now, I just need to get me a 6-inch scale boxing ring. TO THE EBAYS!!!